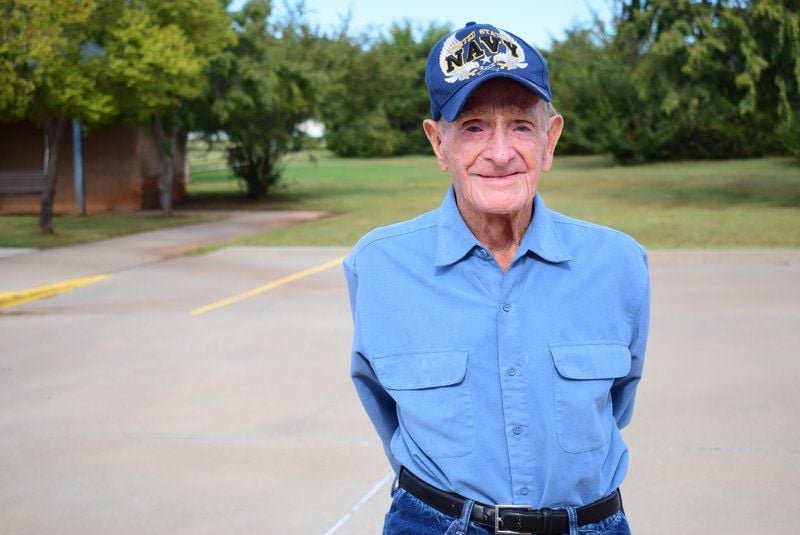 U.S. military veteran and Norman Veterans Center resident Allen Vann turned 100 years old earlier this month. Chief Petty Officer Vann joined the U.S. Navy at 22 years old after the bombing of Pearl Harbor. He served aboard the U.S.S. Seahorse, an eight-man submarine, and engaged in 27 battles over a four-year period. 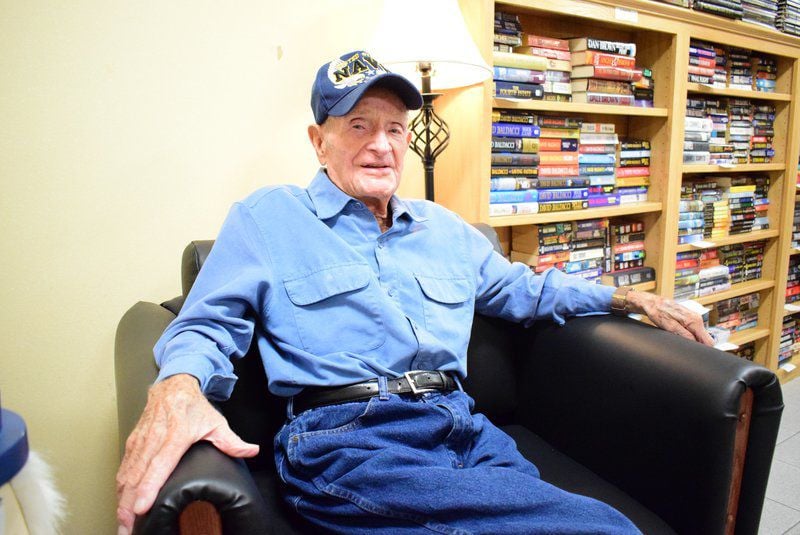 U.S. military veteran and Norman Veterans Center resident Allen Vann turned 100 years old earlier this month. Vann, who joined the U.S. National Guard and then the U.S. Army before the start of World War II, served in the navy during the war aboard the U.S.S. Seahorse.

U.S. military veteran and Norman Veterans Center resident Allen Vann turned 100 years old earlier this month. Chief Petty Officer Vann joined the U.S. Navy at 22 years old after the bombing of Pearl Harbor. He served aboard the U.S.S. Seahorse, an eight-man submarine, and engaged in 27 battles over a four-year period.

U.S. military veteran and Norman Veterans Center resident Allen Vann turned 100 years old earlier this month. Vann, who joined the U.S. National Guard and then the U.S. Army before the start of World War II, served in the navy during the war aboard the U.S.S. Seahorse.

Norman Veterans Center resident Allen Vann celebrated his 100th birthday on Oct. 9. He's worn a lot of hats over the last century -- coal miner, dental technician, preacher, teacher, principal -- but the one he wears most often today, an embroidered U.S. Navy ball cap, is a throwback to his youth and his time as a submariner during World War II.

He has many fond memories of his life, but those days, he said, were the best days of his life.

"It's amazing that it's lasted this long," he said. "It's funny; a hundred years goes by fast, but when you're a young man time moves slowly."

Vann, who previously had joined the U.S. National Guard and the U.S. Army, was allowed to enlist in the U.S. Navy following the Japanese attack on Pearl Harbor. He was 22 years old and itching for action.

"They were looking for recruits for the Navy," he said. "The Japanese had hit Pearl Harbor on Dec. 7. So I joined the navy right away. Then I was on my way. I went to Honolulu and that's where I caught a submarine, the U.S.S. Seahorse and that's where I fought the war."

He said he didn't see any grass skirts until after the war. As soon as he and his shipmates were trained and ready, they left Pearl Harbor.

"We went out into the Pacific to meet the enemy immediately," he said.

And meet the enemy they did. Vann spent four years aboard the Seahorse, criss-crossing the Pacific from Pearl Harbor to Australia, New Zealand and Midway, engaging in 27 battles.

"I enjoyed being on that submarine, because we had a lot of action," he said. "We weren't out there very long before we got to Guam and met the enemy. I remember my first taste of battle was in this submarine going to Midway. It was quite an exciting thing. We took some depth charges but we survived.

"The noise was deafening. It broke bunks off the walls and debris was flying everywhere. We wore helmets down there because there was so much stuff flying everywhere. We just sat and took it. That's all you could do. It could last eight hours or so, not constant but every hour or so … Meanwhile we were trying to move and get away at the time, but when we heard them coming in we would settle down and kill all the motors and noise.

"We went through about four of those before they finally ran out of ammunition.

The Seahorse returned to Pearl Harbor for repairs and Vann and his crew were quickly back out to sea.

"We were loaded," he said. "We had ammunition, we had food, we had everything. That's when we went out looking for the enemy. We weren't dodging. We found them and each time we had a battle. We would sink eight, 10, sometimes 14 of their ships. Now, we took a beating, too. They weren't just throwing rocks at us."

Between battles, Vann said his ship would meet a submarine tender called the U.S.S. Bushnell which executed repairs and resupplied the submarines. That allowed the Seahorse to get back to action quickly, which Vann said was all the better.

By the age of 24 Vann rose to the rank of Chief Petty Officer and as such was chief torpedo man and in charge of ship operations. He said he didn't drink and for that and his penchant for watching over everyone he got the affectionate nickname "Mother." He and his crew went on to receive the Commendation Medal from Admiral Chester Nimitz for their sustained acts of heroism and meritorious service.

Vann said he didn't know when he signed up to be a submariner that you got double pay. He didn't mind when he later found out, but that's not what drew him to it.

"I heard they needed some good young men," he said. "I said 'I don't know how good I am but I'm a young man.' They used to joke with me. They'd say 'Vann you're an Okie, you're used to all of those wide open spaces and you'll go crazy down there in a submarine.'"

Submariners had to undergo psychological evaluation to make the grade, because, as Vann said, it was an altogether different animal.

"It was very cramped quarters," he said. "Everyone had their own bunk but everyone was really close, all lined up. But it didn't bother me."

They ate out of cans -- Vann said the food was good but didn't last long -- and worked in on-off four hour shifts, wrestling with headaches from stale air, with nowhere to exercise and sleeping in narrow bunks next to torpedoes.

They were submerged for up to 12 hours at a time, often in total silence and with the full knowledge that any noise could spell the ship's doom as enemy ships monitored the waters below for the slightest sound.

Vann said the crew didn't even wear shoes half the time because they made too much noise.

Despite it all, Vann said he couldn't imagine it any other way.

Sometimes, before leaving port for battle, Vann said they were informed of the odds against them. He said they were offered the opportunity to discharge but no one ever took it, no matter how daunting the task.

When the Japanese surrendered on Sept. 2 1945, Vann said he was surprised. He hadn't expected the war to end so soon. He was disappointed that his time aboard the Seahorse was coming to an end but he said he was thankful to be alive.

Vann was born in Alabama, moved to Oklahoma, then to Texas and back to Oklahoma, where he was stationed at Fort Sill, before the war began.

After the war, Vann returned to Oklahoma. His parents had passed away, but he said he had friends waiting for him at the train station.

Still, that didn't make things easy for him. He said he struggled to adapt after the war, like so many other soldiers, before finding his way as a preacher. He went on to attend Abilene Christian College where he studied education. That led him to a career as an elementary teacher and later a principal in Oklahoma City.

He met his late wife Kathryn at church in Ada following the war. He fathered two sons, Dan and Ronnie, who went on to join the U.S. Air Force and U.S. Marine Corps, respectively.

Dan lives in Edmond and when his father began to exhibit late onset PTSD symptoms in 2009, he found him a place at the Norman Veterans Center.

Vann said it's been a good home for him. He said he enjoys sharing stories with the other residents -- stories that very rarely tread into war -- and walking the grounds. Dan said the proximity and quality of care have made it a superb fit.

"I can't say how much I appreciate what they have done," he said. "It's clear that they care for him, not only as a resident and a patient but also an individual."

Vann said he enjoys receiving visitors and recently had a couple from city hall. With a proclamation in hand, Mayor Lynne Miller and council member Breea Clark came to see Vann on his birthday.

Miller said he was charming and Clark said it was honor to meet him. Vann would tell you he's not a hero, but that's a point of disagreement for some.

"It's not every day you have the chance to connect with a World War II veteran," Clark said. "Surrounded by his loving family and the residents and staff of the Norman Veterans Center, I will never forget the comment he made regarding his service: 'I may not have known you then, but I did it for you.'"

Miller said the proclamation she brought with her recognizing Oct. 9 as Allen Vann's 100th Birthday celebration is an unofficial one used to celebrate something special.

Dan said it meant a lot to his dad.

"In a way we're surprised [he's made it to 100] but he's just a tough old boot … I've seen him a lot over the last 10 years since he's been in Norman. I've seen him get older and slow down some, but he's always been an over-comer."