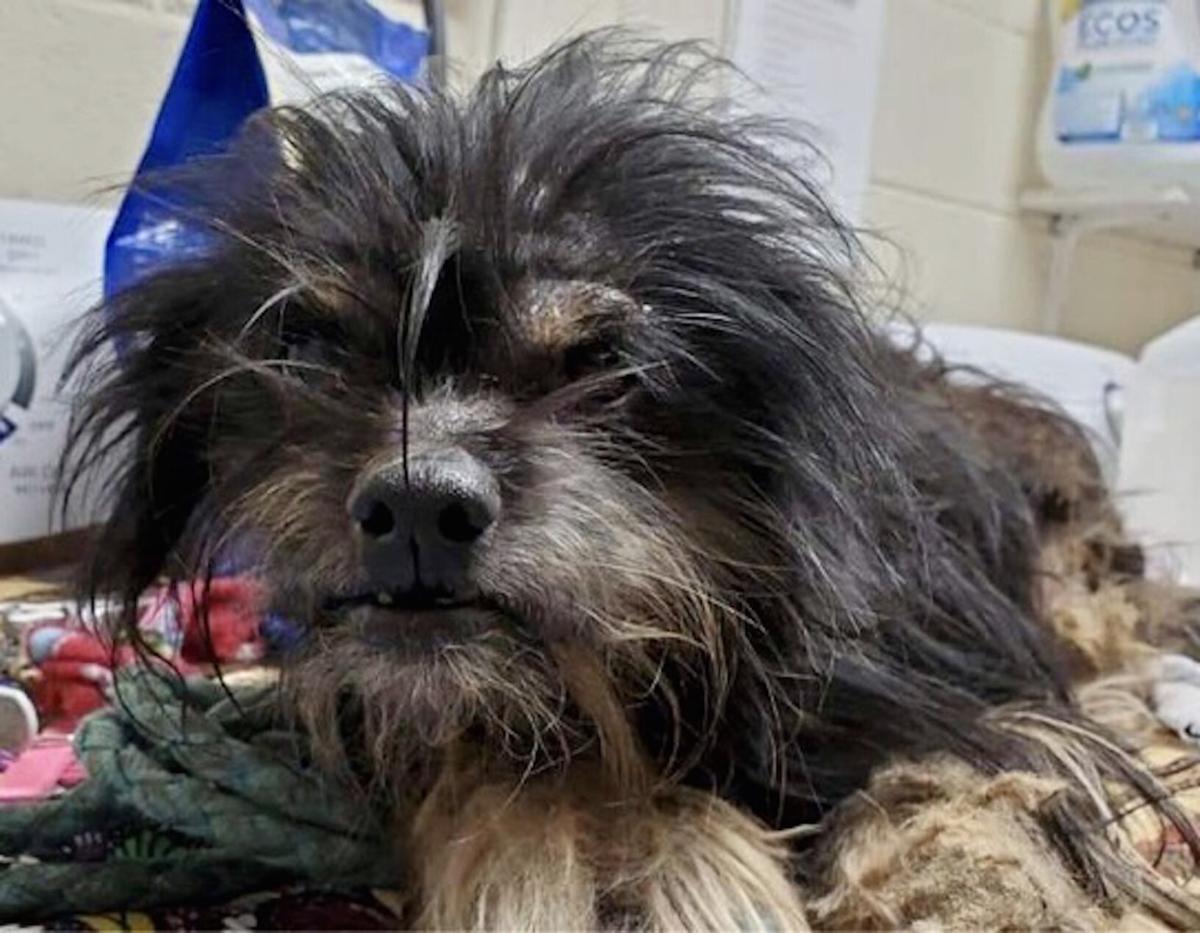 Dalynda Evans’ current foster, Annie, was found on the street covered in fleas and in need of medication for her skin. Evans start Lupa Legacy, a mission to foster dogs with special medical needs after her experience with a foster dog named Lupa. 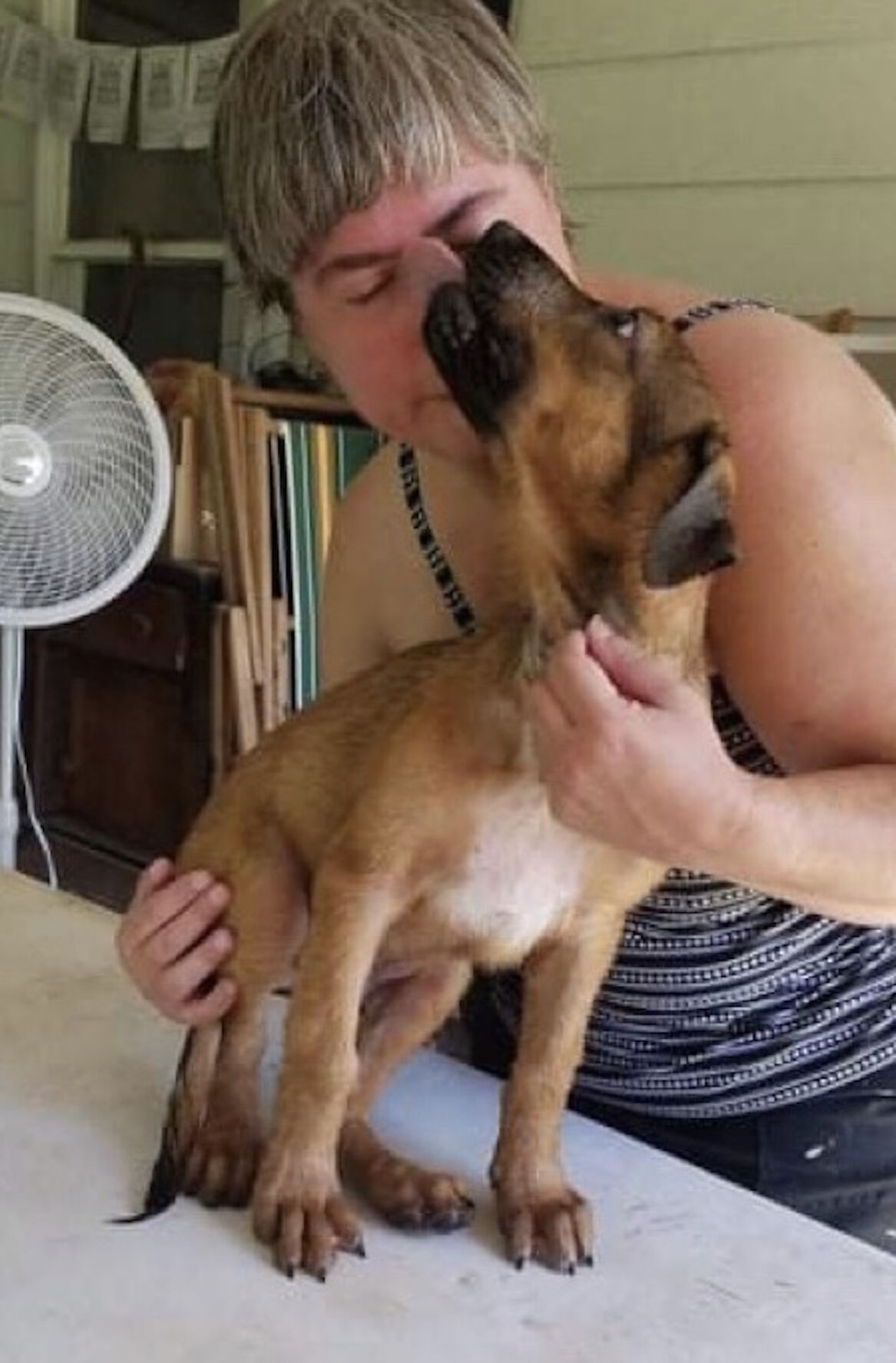 Dalynda Evans gets licked by Thor, a puppy she helped after he was rescued from poor conditions earlier this year.

Dalynda Evans’ current foster, Annie, was found on the street covered in fleas and in need of medication for her skin. Evans start Lupa Legacy, a mission to foster dogs with special medical needs after her experience with a foster dog named Lupa.

Dalynda Evans gets licked by Thor, a puppy she helped after he was rescued from poor conditions earlier this year.

In 2012, Dalynda Evans took in a black puppy mill dog weighing just 5 pounds with brown-stained fur and missing most of her teeth.

Evans, a Cleveland County resident who has volunteered with the Bella Foundation since 2011, brought the dog home, later to be named Lupa by her daughter. Some thought Lupa wouldn’t recover, but she lived eight more years and, in that time, a special bond was formed between her and her new family, Evans said.

After receiving medical treatment for rotting teeth, double ear infections and a urinary tract infection, Lupa lived out her remaining years with a new lease on life, she said.

That bond inspired her to start Lupa Legacy, a mission to foster pets with special medical needs and advocate for all animals. She started fostering dogs with medical needs to honor Lupa, the dog she said changed her whole world.

“When an animal comes out of a municipal shelter or rescue setting, even though they’re cared for, the unfamiliar dogs and surroundings make it stressful and they build up stress hormones that cause behavior different than how they are normally,” said Eric McCune, founder of the Bella Society for the Prevention of Cruelty to Animals. “Plus, you have someone who knows everything about that dog, which greatly reduces our return rate.”

Evans took time off from fostering after Lupa’s and her other dog Wolfrick’s passing to grieve but has continued to help with animal welfare efforts in Cleveland County.

Last year, Evans took in Guinness, a dog who was abandoned by his previous owners when they moved.

“He was allergic to grass and starving to death,” Evans said.

Evans created a paste with coconut milk and coconut oil and applied it to Guinness’ raw skin. After 48 hours indoors, Evans said Guinness’ tail was wagging and his demeanor completely changed.

“And then he found a family in Noble,” she said.

In March, Evans saw a Facebook post from fellow county animal advocate Andrea Clark showing pictures of puppies from two litters sitting on the steps of a trailer with a request for help.

Evans borrowed her friend’s minivan and loaded it with tarps and crates before heading to rural Noble to get the puppies. They then took them to Dr. Nancy Worland at City Animal Hospital in north Oklahoma City for checkups and vaccinations.

Evans coordinated the adoption of four puppies to Minnesota through the Peaceful Animal Adoption Shelter in Vinita.

“We had two females spayed at Oklahoma Humane Society, one at Walnut Creek Animal Hospital in Purcell and four through the generosity of Best Friends of Pets at Spay Experts in Moore,” she said.

This fall, Evans began fostering Annie, a Yorkshire Terrier and Chihuahua mix she calls her “little wookie.” Annie was found wandering the streets covered in fleas and urine.

Evans said her coat and skin were in such bad shape, she needed to be shaved and given three rounds of antibiotics.

Evans said after a few weeks, Annie seems rejuvenated and is learning to trust people again.

“When people come over, she still hides under the bed,” Evans said. “Luckily, she’s heartworm negative, so our focus is getting her to a healthy weight.”

McCune said volunteers who donate their time and resources like Evans are the reason they have adopted close to 12,000 animals into forever homes since 2008.

He said many animals with special needs are euthanized because some shelters don’t have the resources to provide them with adequate care.

Evans said she recently applied and received LLC status for Lupa Legacy and, this month, finished teaching a class at the University of Oklahoma to grow the number of volunteers in the community.

“My eight students and teacher’s assistant are applying to volunteer at Norman Animal Welfare,” Evans said. “They hope to walk dogs and get great photos for Petfinder.”

Those who may not be able to foster can still get involved in other ways, such as taking pictures for social media and driving animals to appointments, she said.

“Caring for a special needs dog is not an easy thing, so in the rescue world, those fosters that take those kinds of animals on, care for them and help find the home are super valuable to all of us in rescue,” McCune said.