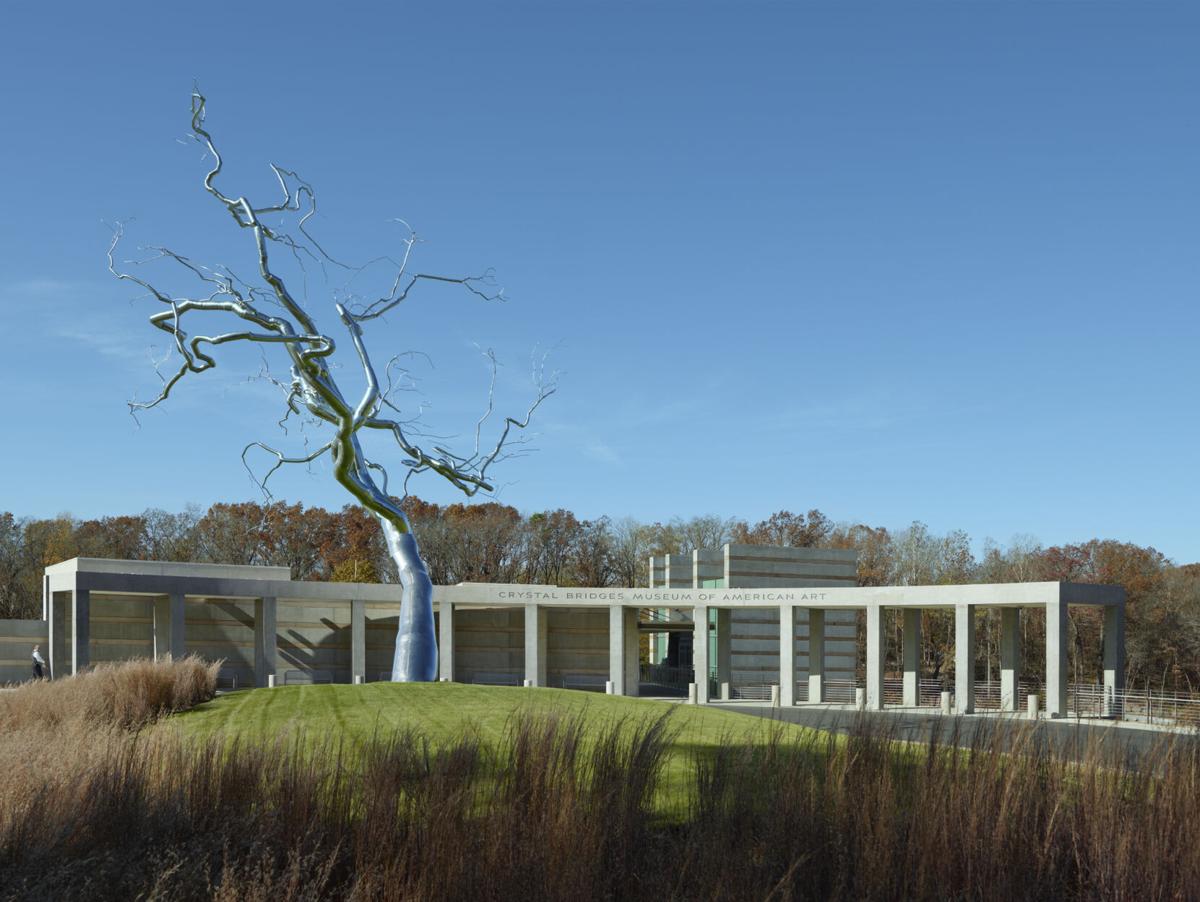 The entrance to Crystal Bridges Museum of American Art gives little indication of the innovative architecture of the structure and the wealth of artistic excellence inside. 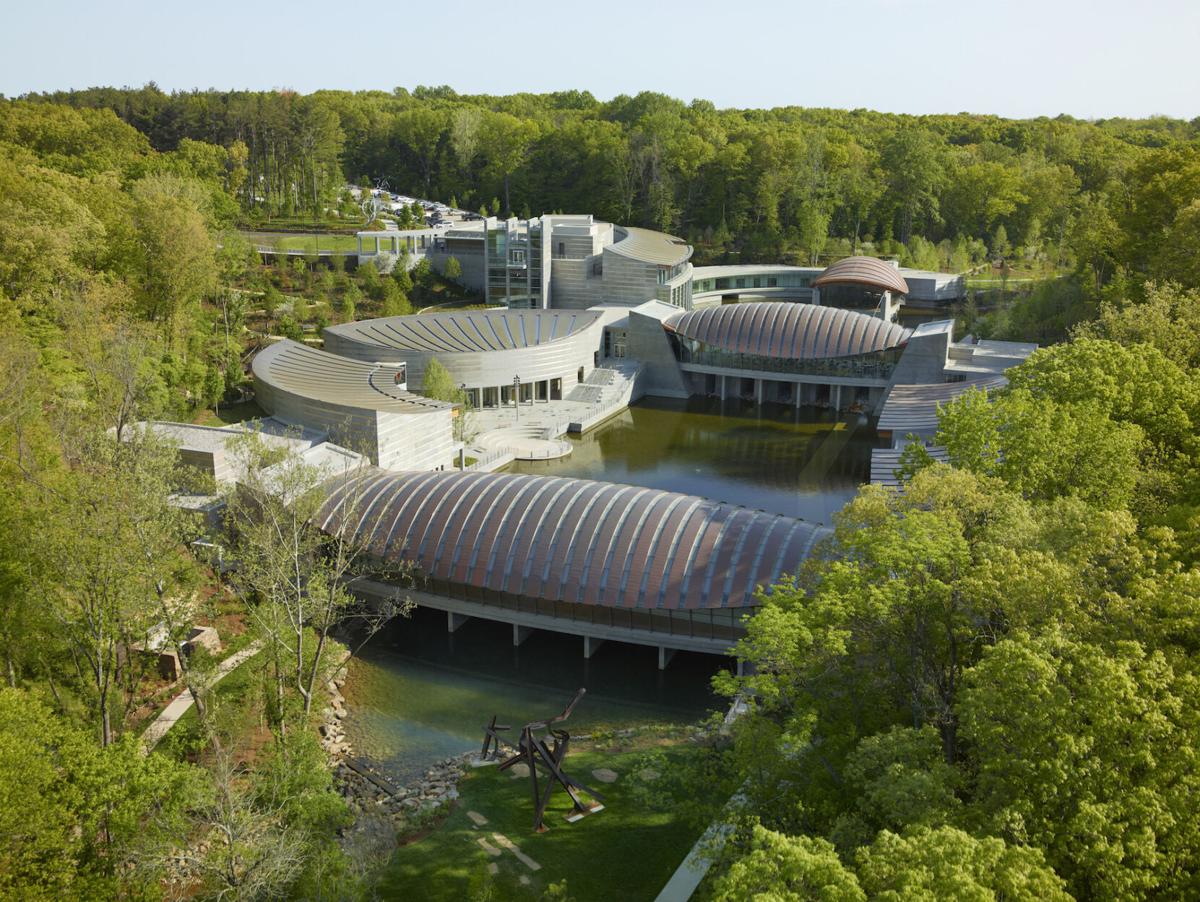 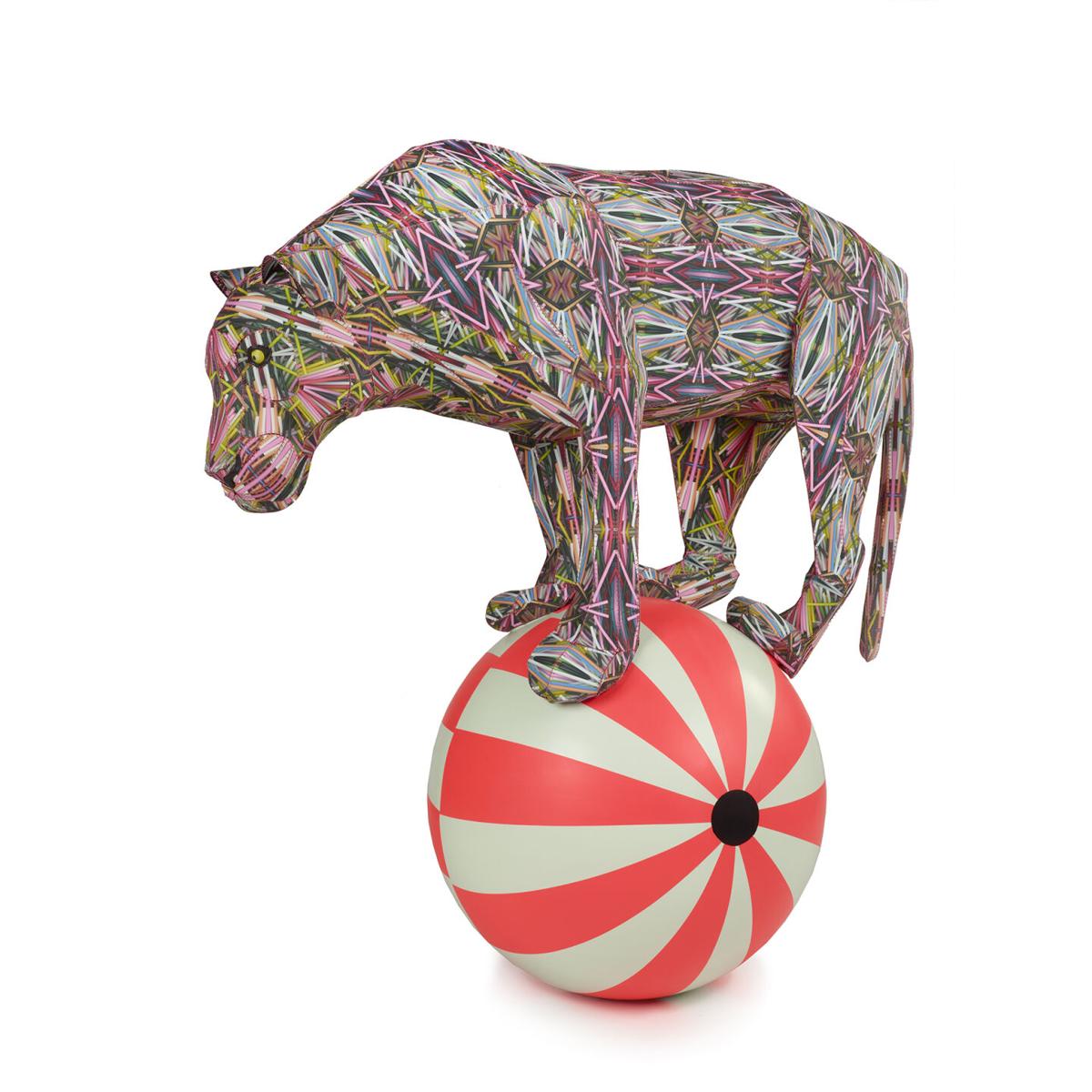 Artist Anne Lemanski often uses the relationships between humans and animals as her theme. 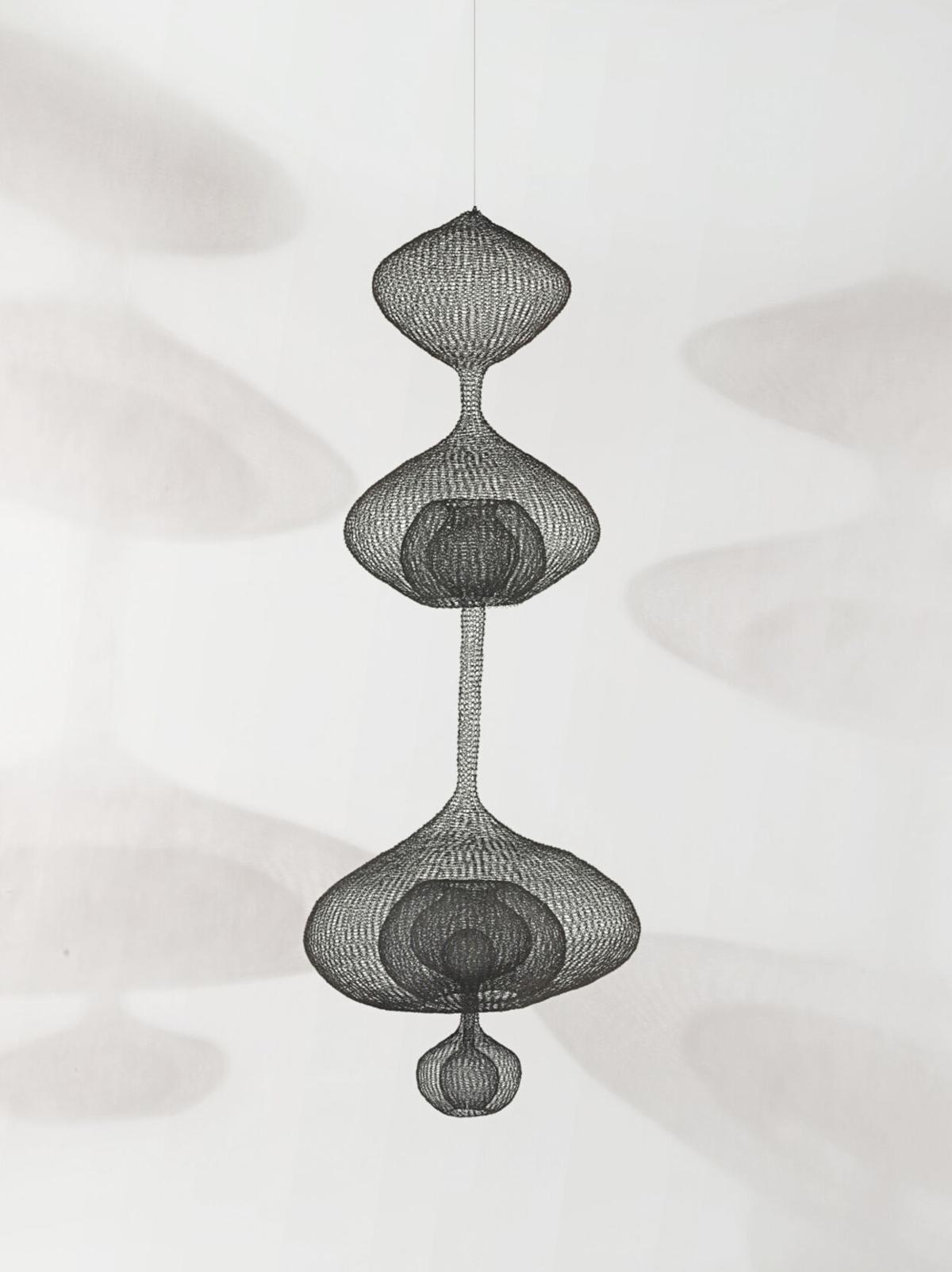 This piece by Ruth Asawa is described as “Hanging Four-Lobed Continuous Form within a Form.” 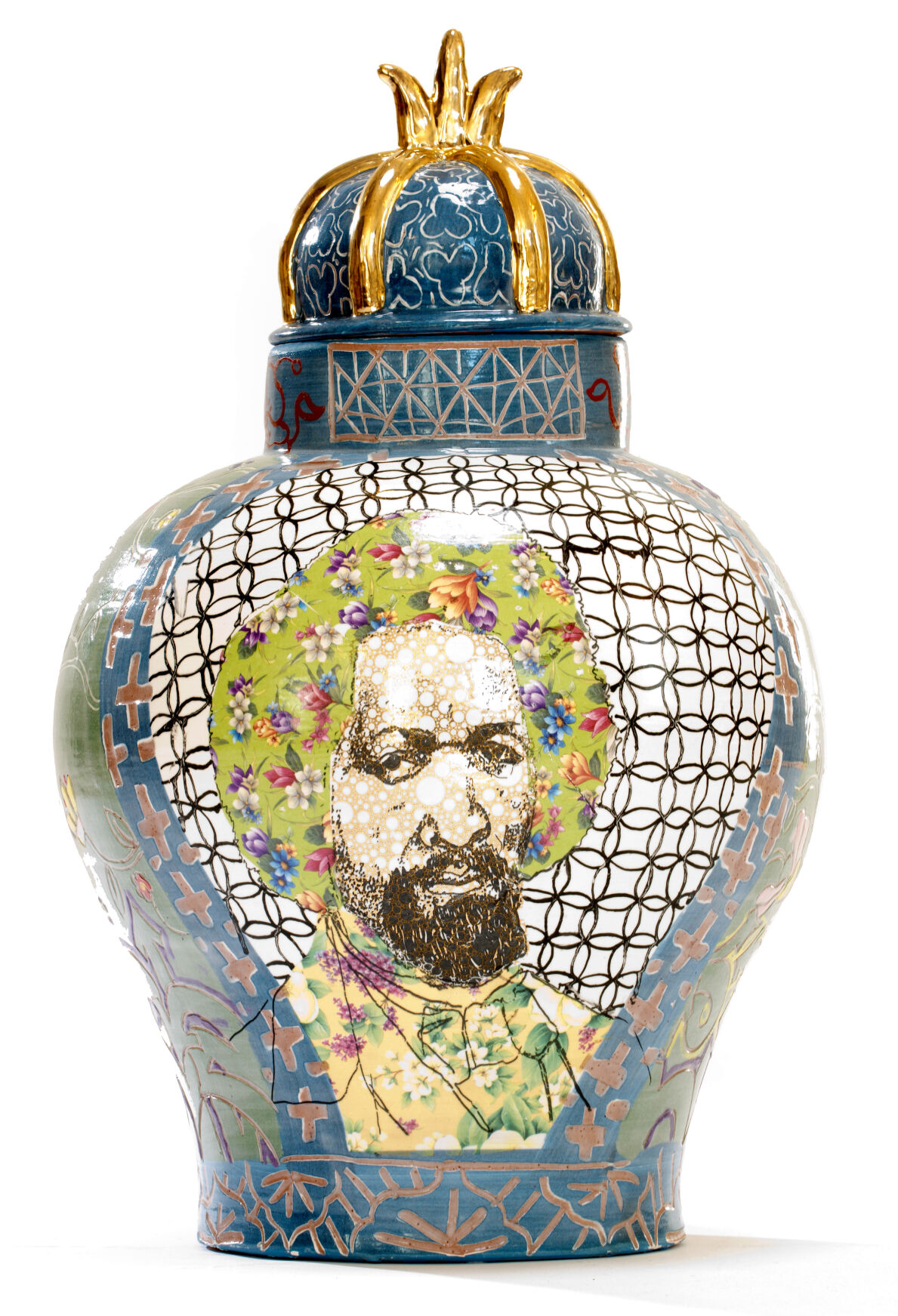 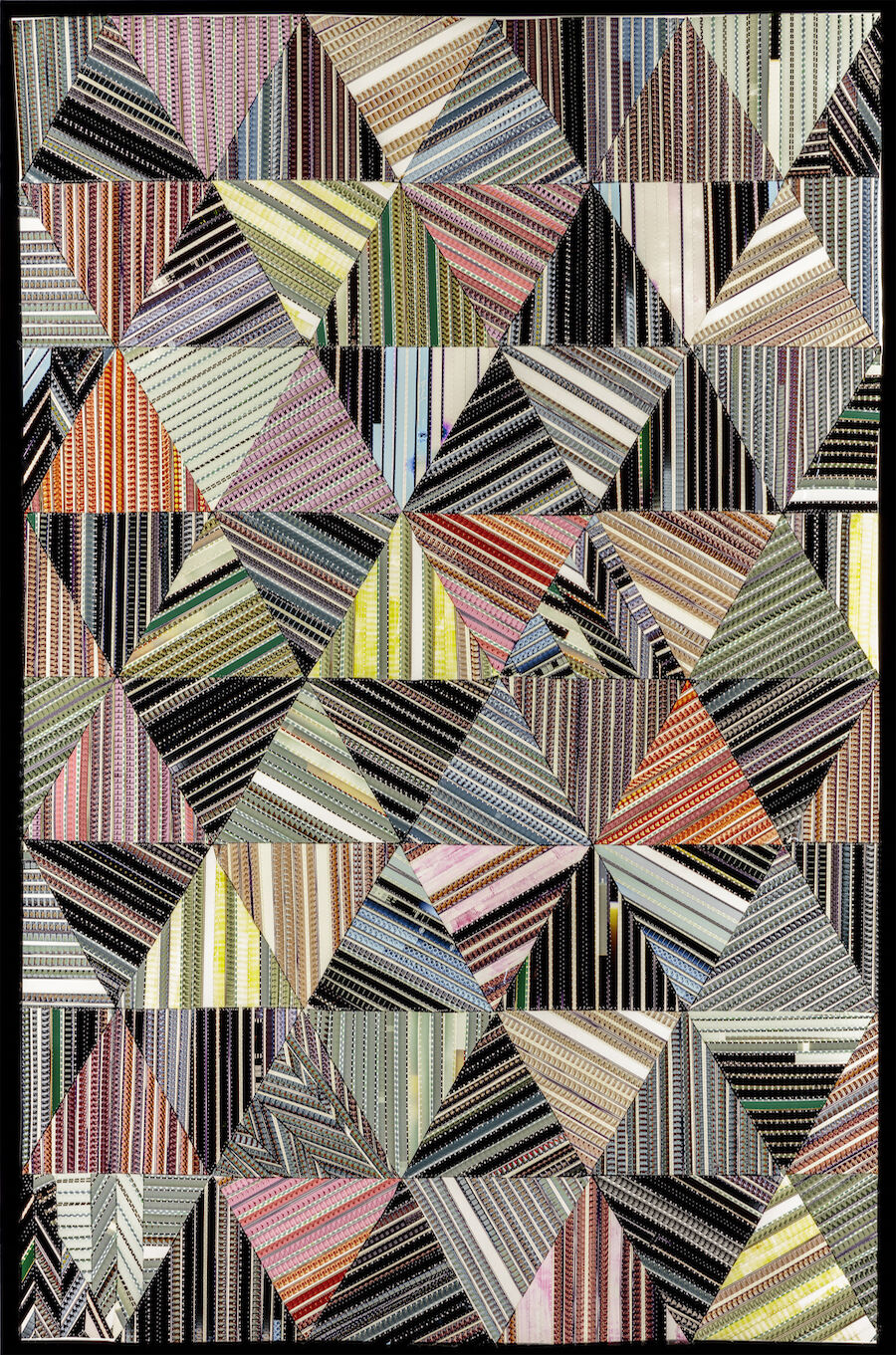 Sabrina Gshwandtner’s “Hands at Work Film” makes use of strips of 16-millimeter film to create a quilt-like pattern. 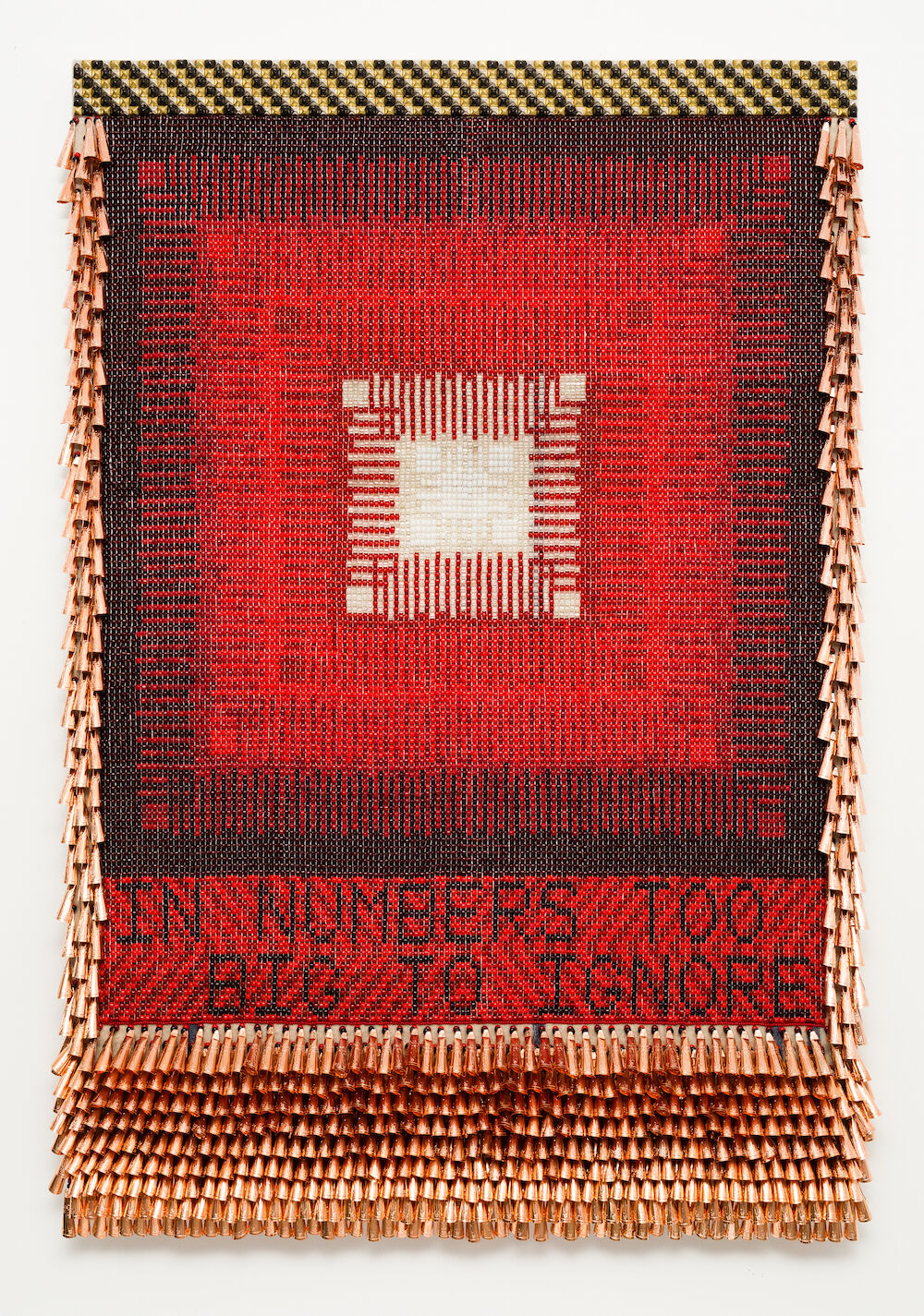 The entrance to Crystal Bridges Museum of American Art gives little indication of the innovative architecture of the structure and the wealth of artistic excellence inside.

Artist Anne Lemanski often uses the relationships between humans and animals as her theme.

This piece by Ruth Asawa is described as “Hanging Four-Lobed Continuous Form within a Form.”

Sabrina Gshwandtner’s “Hands at Work Film” makes use of strips of 16-millimeter film to create a quilt-like pattern.

A tree with branches like witches’ fingers reached for the gray, threatening sky. The building, what I could see of it, looked foreboding — minimalist, stark, no promise of what was inside except the wording “Crystal Bridges Museum of American Art.” Crystal Bridges sneaks up on you.

I’ve never seen Crystal Bridges in the sunshine. Then the tree, shining stainless steel, must look inviting rather than scary. Knowing that secrets hide behind the austere façade, whatever the weather, I’ll hurry in to enjoy one of the nation’s preeminent art museums.

Now, with its current temporary exhibition, “Crafting America,” I look forward to diving into a wonderland of color and creativity.

Always expect the unexpected at Crystal Bridges, and this exhibition is no exception. It examines and defines craft and its relationship to American identity in new ways.

With 120 objects by 98 artists, the exhibit’s scope is wide. The artists represent a broad swath of the nation, with representation from many geographical locations and ethnic identities. The materials used are just as diverse.

“Crafting America” is divided into several sections, beginning with a definition of craft as “skilled making on a human scale.” This is a more contemporary definition than “hand-made,” since contemporary craftspeople often employ tools and technology in the process of creation.

But it still retains the differentiation from items which are mass produced. The underlying theme of the exhibit comes from the Declaration of Independence and the concepts of “life, liberty and the pursuit of happiness.”

I’ve chosen a few pieces from each section to give you a peek at the variety and diversity of items and artists.

• What is craft: Cases display pairs of objects that illustrate different interpretations of key elements of craft. A pairing of two different ceramic pieces references history.

• Ideas of independence: Works presenting aspects of independence from different perspectives include “Home of the Brave” by Consuelo Jiminez Underwood, which uses an American flag theme and incorporates indigenous weaving. A frayed strip along the bottom perhaps indicates the idea that our country is a work in progress.

One of the most appealing pieces to me reflects a darker view. “In Numbers Too Big to Ignore,” by Mississippi Choctaw-Cherokee artist Jeffrey Gibson, calls attention to the tribulations of Native American women.

The base of the hanging is a repurposed, wool Army blanket.

You can only glimpse it on edges of the piece, which is covered with beads and framed by copper jingles, ornaments often used on ceremonial and dance wear.

• Life: Pieces in this area relate to everyday living. While some of the creations are functional, and a number of items stretch the genre to the limits of imagination.

The artists’ biographies and their relationship to their works are interesting. Two pieces of furniture are by Japanese artists George Nakashima and Gentara Kenneth Hikogawa, who met in the Minidoka Internment Camp during World War II.

Hikogawa’s chest of drawers was built while he was in the camp and made from scraps of wood he found.

A trained artist, he taught the younger Nakashima, whose work is represented by an unusual rocking chair.

• Liberty: This section features larger works from the post-war period, including those by artists Peter Voulkos, Sheila Hicks and Ruth Asawa.

Ruth Asawa takes the traditional craft of Mexican wire basket-making to abstraction with a seven-foot-tall hanging form of iron wire.

A massive finger ring of silver, turquoise and coral by Hopi artist Charles Loloma is one of three pieces on loan from the National Museum of the American Indian, Smithsonian Institution.

• Pursuit of happiness: Like chocolate sauce, whipped cream and a cherry on a great dessert, this area provides a fabulous and flamboyant finish. Included are fantastic costumes, giant fruit and a large tapestry embellished with everything except the kitchen sink.

“Tigris T-1” by Anne Lemanski, a new acquisition by Crystal Bridges, is one of the stars of the section. It features a life-sized tiger balancing on a red and white ball. Lenamski created this piece by building a metal armature, printing a straw motif on archival paper and stitching the pieces together with artificial sinew.

Although I have been to Crystal Bridges several times, I haven’t seen the exhibition in person yet, but, thanks to extensive information and videos from Crystal Bridges, I have been able to see — and listen to interpretations of — a number of pieces in the display.

Once I feel comfortable traveling, Bentonville will be one of my first destinations, all because of this exhibition. Ordinary words don’t do it justice. I’ll probably show my age, but I’m pretty sure Mary Poppins would exclaim, “It’s supercalifragilisticexpialidocious.”

FYI: Crafting America will be on view until May 31. Currently, the museum is open Wednesday through Monday.

While there is no charge for admission, timed tickets must be ordered in advance.

There is a $12 charge for “Crafting America” for adults.

Admission to the exhibition is free for museum members, SNAP participants, veterans and youth ages 18 and under.

Donald Dayne "DAF" Keim, 68, of Norman, passed away Wednesday, April 14, 2021. There are no services scheduled at this time. Condolences may be shared at www.havenbrookfuneralhome.com