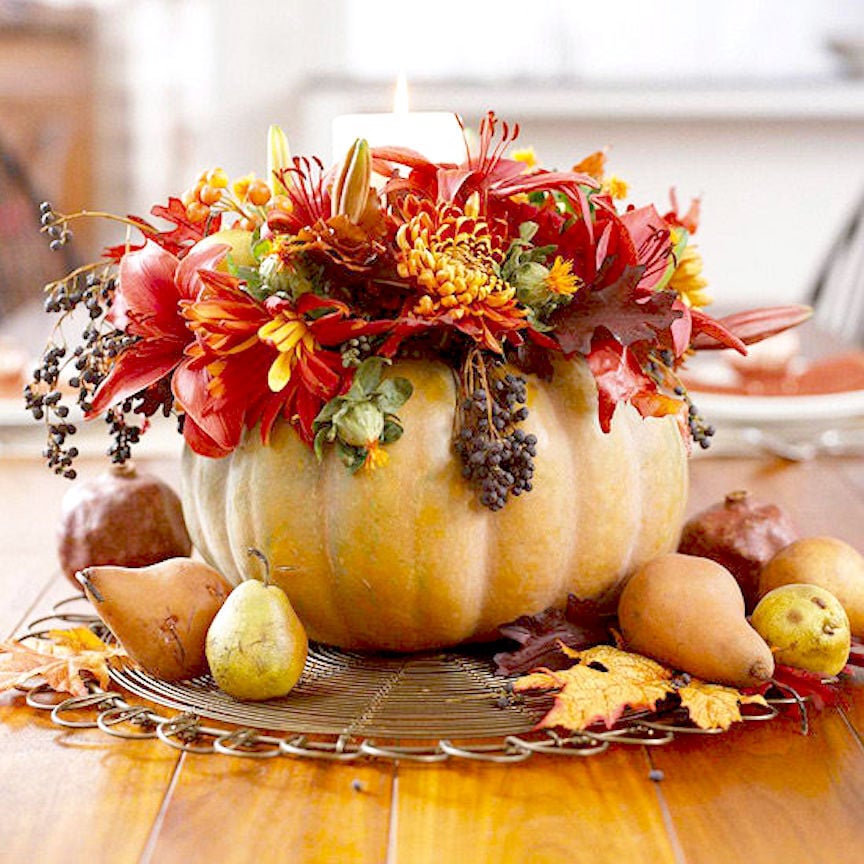 White or pale orange pumpkins filled with mums, berries and nuts surrounded by pears and other fall fruits are stunning on a table. 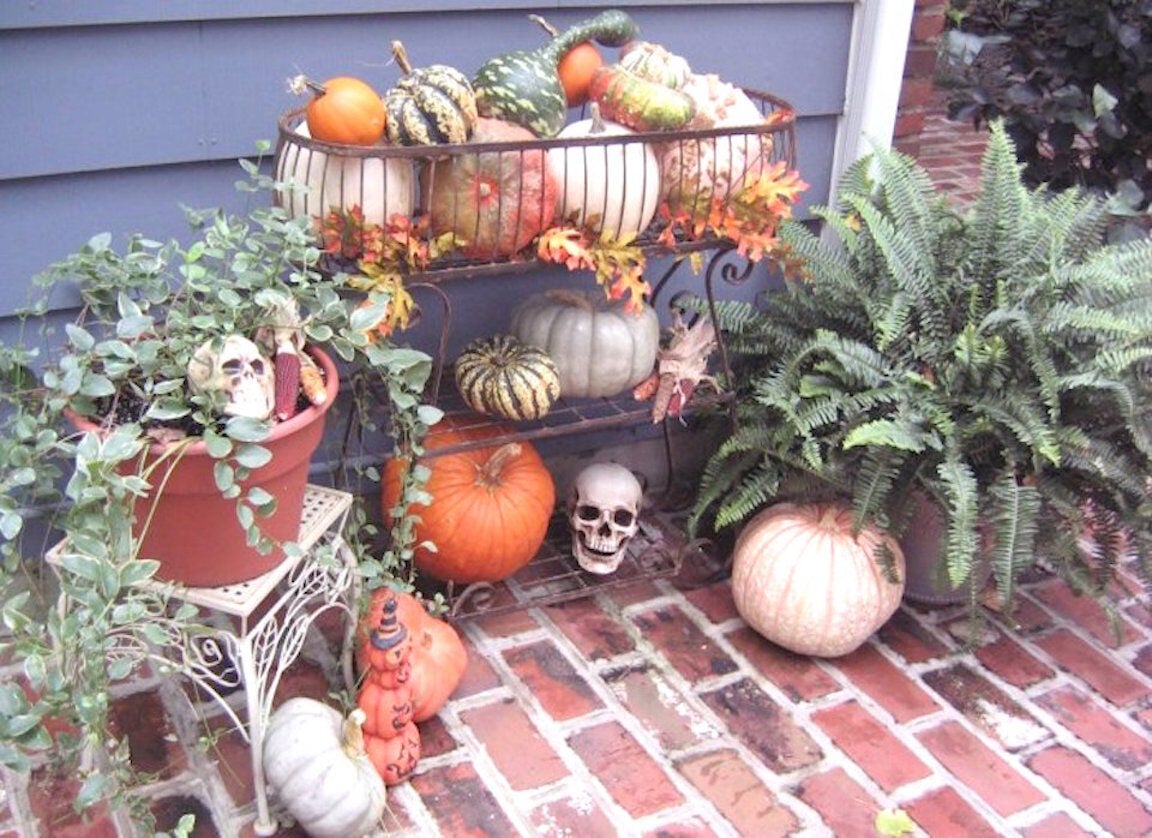 Use skulls with pumpkins to add Halloween flavor to fall features. 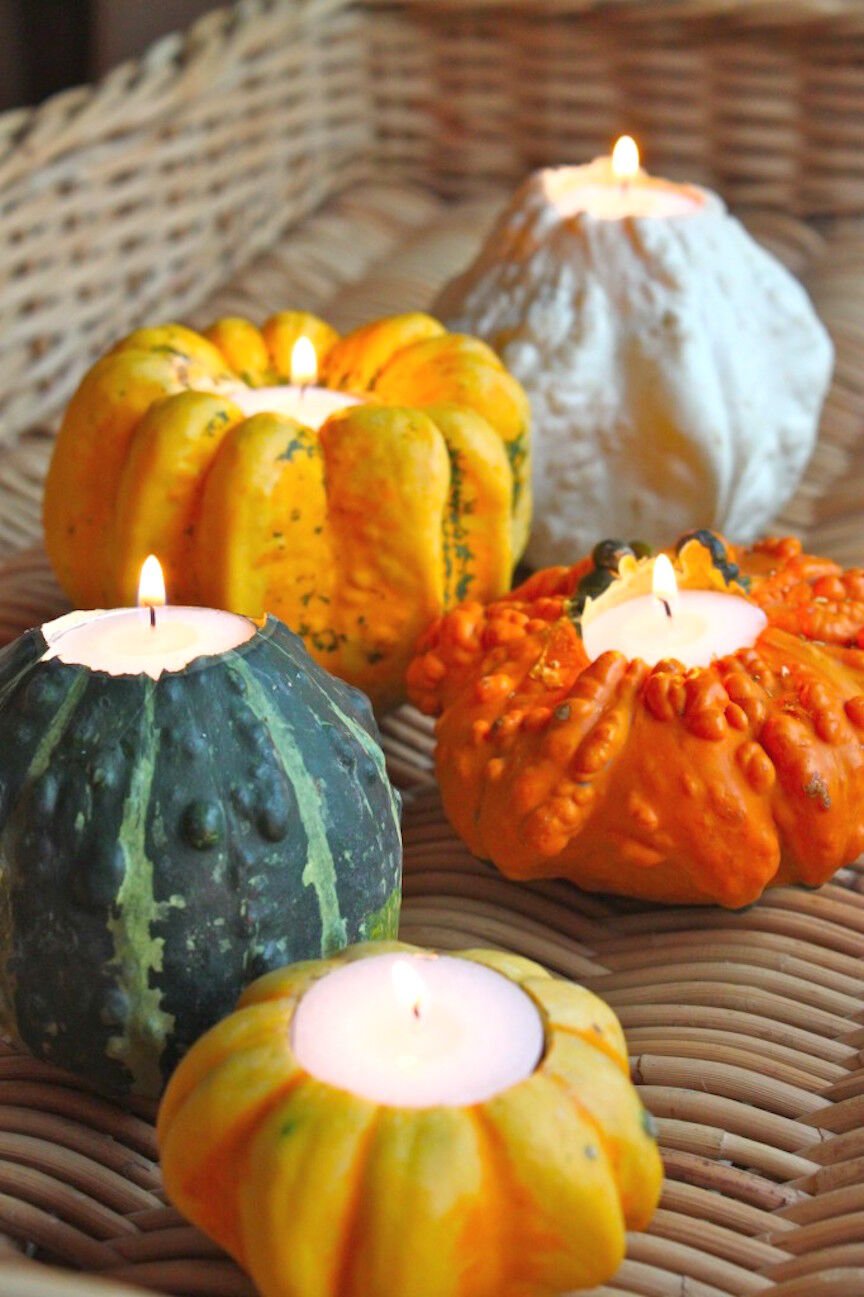 Small pumpkins and gourds are perfect in centerpieces using votive candles in them. 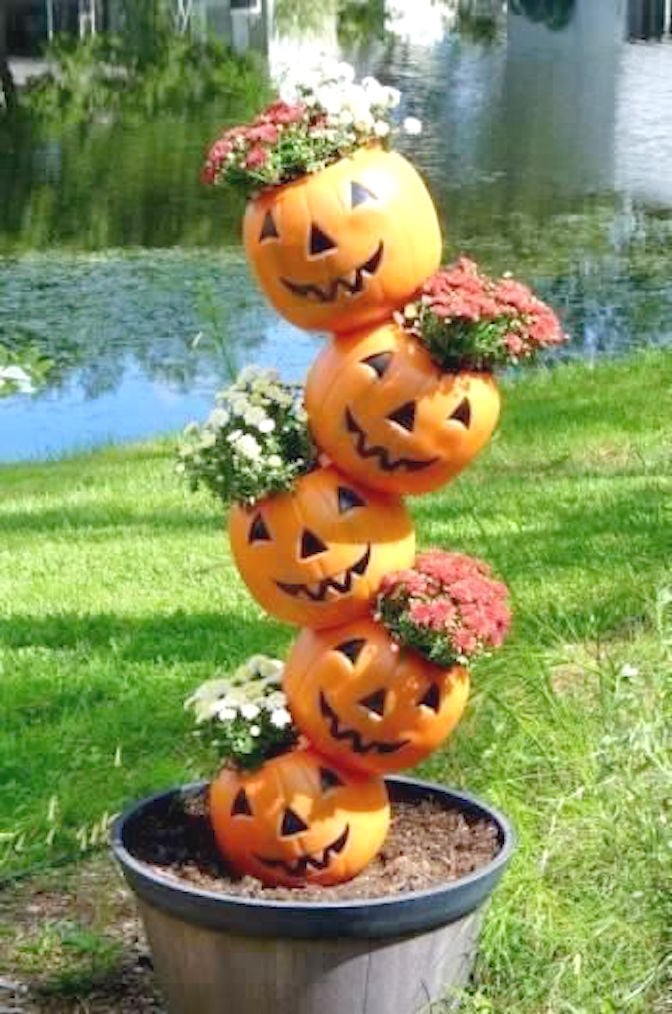 For a whimsical look to your landscape, thread several pumpkins at opposite angles onto a small pipe to create a totem. Fill the pumpkins with flowers and top with a scarecrow hat for an eye-catching yard decoration. 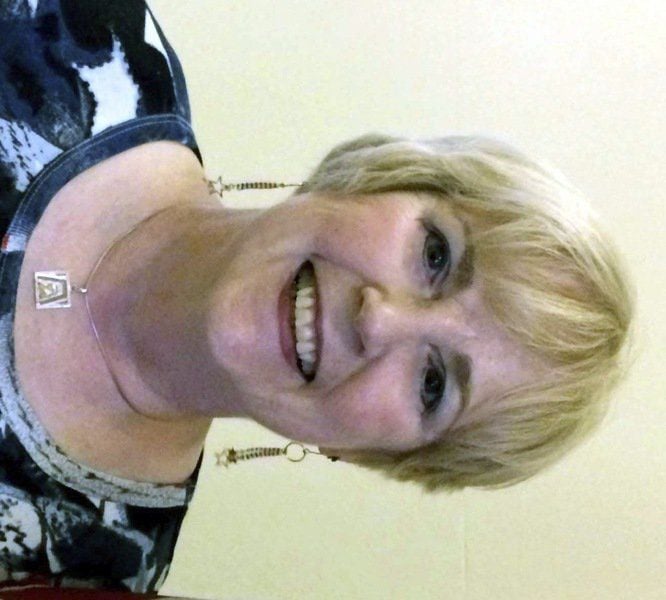 White or pale orange pumpkins filled with mums, berries and nuts surrounded by pears and other fall fruits are stunning on a table.

Use skulls with pumpkins to add Halloween flavor to fall features.

Small pumpkins and gourds are perfect in centerpieces using votive candles in them.

For a whimsical look to your landscape, thread several pumpkins at opposite angles onto a small pipe to create a totem. Fill the pumpkins with flowers and top with a scarecrow hat for an eye-catching yard decoration.

Fall has finally arrived, and with it cooler weather. Fall also is the time for pumpkins — to grow, eat and to use in decorating homes and landscapes. Pumpkins are really versatile, and they have a very interesting history.

Pumpkins and squash are believed to have originated in the ancient Americas. These early pumpkins were not the traditional round, orange upright Jack-O-Lantern fruit we think of today when we say the word “pumpkin.” They were a crooked neck variety, which stored well.

Early Native Americans roasted pumpkin strips over campfires and used them as a food source, long before the arrival of European explorers. Pumpkins helped them make it through long cold winters. They used the sweet flesh in numerous ways: roasted, baked, parched, boiled and dried, and they ate pumpkin seeds and used them as a medicine.

The blossoms were added to stews, and dried pumpkin could be stored and ground into flour. Also, they dried the shells and used them as bowls and containers to store grain, beans and seeds.

They pounded and dried the pumpkin flesh into strips and wove the strips into mats, which they used for trading purposes.

Native Americans introduced pumpkins and squashes to the Pilgrims. Pumpkins were an important food source for the Pilgrims, as they stored well, which meant they would have a nutritious food source during winter months.

Pumpkins were served at the second Thanksgiving celebration. Pilgrims cut the top off a pumpkin, scooped the seeds out and filled the cavity with cream, honey, eggs and spices. They placed the top back on and carefully buried it in the hot ashes of a cooking fire. When it finished cooking, they scooped the contents out, along with the cooked flesh of the shell, like a custard.

Does this sound like an early pumpkin pie? Yes, without pumpkins many of the early settlers might have died from starvation. Today, pumpkins are symbols of harvest celebrations.

Pumpkins are very good for you, and they taste good. Nearly every part of the pumpkin can be eaten. The cooked pulp is fabulous in pies, cookies, breads, soups, appetizers, main dishes ... the list goes on and on. The blossoms are excellent breaded and fried or used as a wrap. The seeds make a great snack.

Of course, pumpkins are wonderful as decorations. A squatty pumpkin makes a surprisingly sophisticated vase. With the top and contents removed, the pumpkin holds water for up to seven days. Or put flower foam, dirt and even a plastic container inside to hold and nourish flowers. Roses, lilies, and poms crowded into the pumpkin’s opening can be stunning.

Mix things up and use a white pumpkin this year, sometimes called a fairytale pumpkin. Flowers in yellows, peaches and shades of orange, accented with sprigs of berries, complement the white pumpkin shell beautifully. To help extend freshness, coat the cut edges in Vaseline. Or purchase a white foam pumpkin at a craft store and fill it with natural flowers.

Small grapefruit-sized pumpkins and even tiny gourds can hold dry grasses, votive candles and taller candles. Use them to hold flowers in your centerpiece and place a big pumpkin between them. Or try mixing a bud vase with a candle and a small pumpkin on a pedestal. Combinations like these reflect the rich variety of textures available in autumn.

Pumpkins are one of the most versatile vegetables we have — for growing, eating and decorating. Pause a moment to appreciate the beauty of the common pumpkin. Its buttery smooth surface and even lines could round out a Halloween or fall theme in your home.

For little expense, you’re buying an unusual, seasonally appropriate decoration. and you won’t even have to find a place to store it afterward.