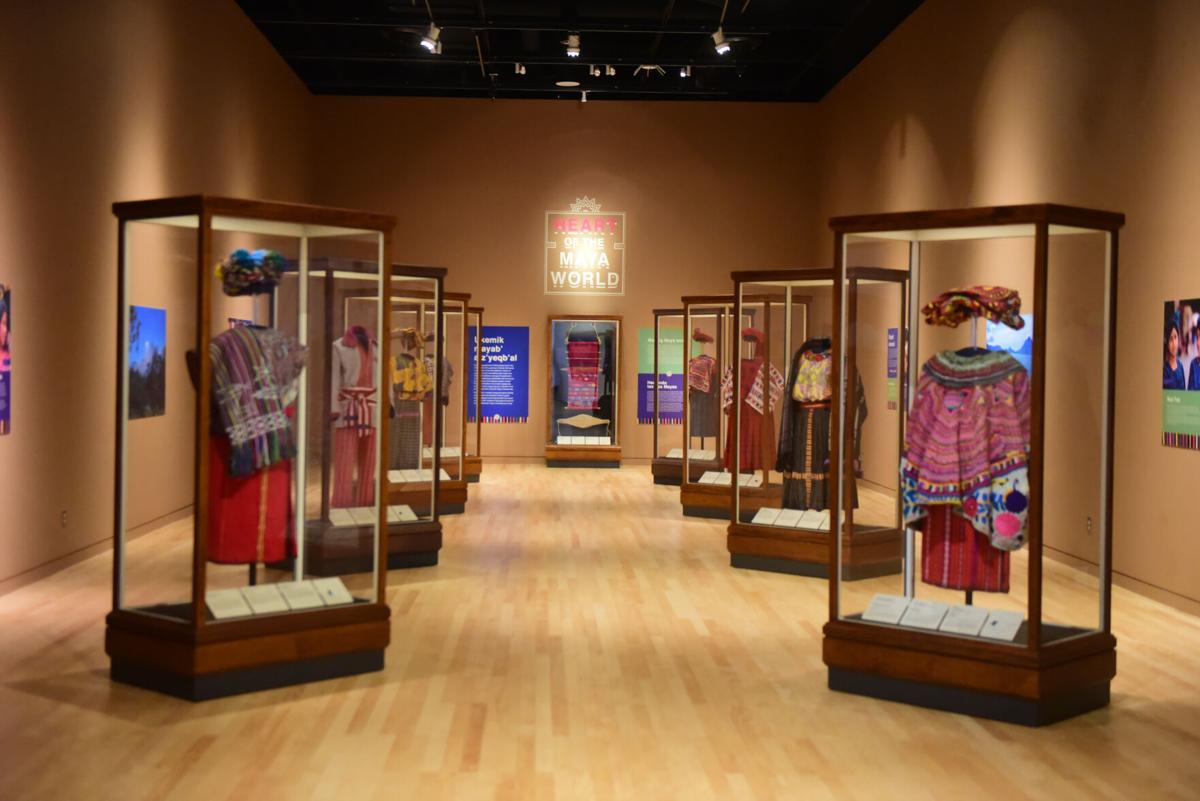 “Guatemalan Textiles: Heart of the Maya World” is open through Dec. 6 at the Sam Noble Oklahoma Museum of Natural History. 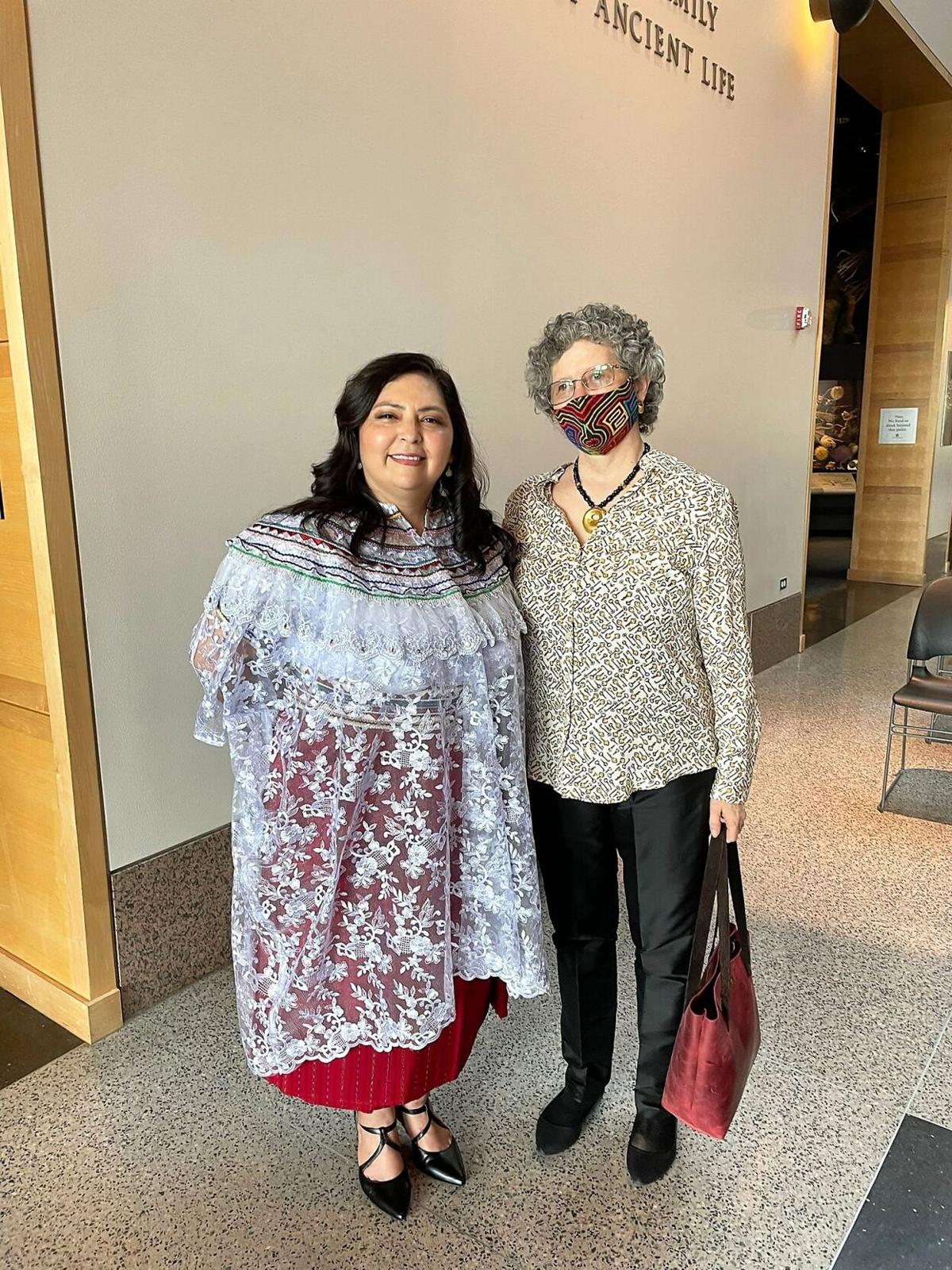 Yoana Walschap, who is wearing a ceremonial dress from Santa Eulalia, Huehuetenango, poses for a photo with anthropologist Yoana Walschap at the Sam Noble Oklahoma Museum of Natural History.

“Guatemalan Textiles: Heart of the Maya World” is open through Dec. 6 at the Sam Noble Oklahoma Museum of Natural History.

Yoana Walschap, who is wearing a ceremonial dress from Santa Eulalia, Huehuetenango, poses for a photo with anthropologist Yoana Walschap at the Sam Noble Oklahoma Museum of Natural History.

A project more than 40 years in the making that displays clothing traditions from Guatemala is now available for viewing at the Sam Noble Oklahoma Museum of Natural History.

Just in time for Hispanic Heritage Month (Sept. 15-Oct. 15), “Guatemalan Textiles: Heart of the Maya World” allows museum visitors to see and learn about traditional clothing, or tipico, that expresses the culture of the Guatemalan and Mayan people through vivid colors and symbolism.

The tipicos are part of the museum’s ethnology collection, according to local curators.

The idea for the exhibit began after Guatemalan Norman resident Saidy Orellana learned about the collection from anthropologist Yoana Walschap in 2006. In 2019, Walschap and Orellana invited former Guatemalan ambassador Jose Arturo Rodriguez Diaz to join the conversation about making the Mayan textiles collection available to the public.

The start of Hispanic Heritage Month this year coincides with the opening of “Guatemalan Textiles.” Orellana said the exhibit and month are milestones of progress since she moved to Norman.

“We are being acknowledged, and we feel accepted in the city,” Orellana said.

The exhibit’s development began locally by Walschap, who moved from Columbia to Norman in 1990. Walschap’s inspiration came after boxes containing Mayan textiles came to the museum from Guatemala and Mexico without documentation from Texas archaeologist John Pitzer in the ‘80s, she said.

Walschap began studying them and helping Pitzer complete the costumes of the Mayan people in Guatemala, she said.

“We needed to differentiate people and culture and different languages, so it was important to have complete costumes,” Walschap said.

Claire Nicholas, ethnology curator of the museum, said Guatemalan textiles catch the eye with a vibrant aesthetic that is achieved partially through unique dyeing techniques. Traditionally, the Mayans use natural dyes from avocado, guava, carrots and insects along with home-grown cotton to symbolize elements of nature and tell stories.

Nicholas said the collection is head-to-toe ensembles from eight different departamentos, or geographic divisions in the country, selected in a consultation with the Guatemalan Consulate. Walschap said the exhibit can serve as an educational experience for visitors to learn about the country’s 22 departamentos.

Orellana said having the textiles available for public viewing is an honor because it will teach lessons on how to appreciate the many differences, customs and traditions within the culture.

Orellana said her kids were the only Hispanics in the elementary school they attended in 2004. The Hispanic population in Norman has grown in Norman from 7,000 in 2010, to more than 10,000 in 2020, according to Census data.

Orellana said Mayans were heavily persecuted during the Guatemalan Civil War. Her father was part of the persecution, she said.

“Wearing an outfit in public was a big red flag, so people started not wearing it,” Orellana said. “Then racism came into play, where if you’re indigenous, you’re less than a white person.”

Richard Lupia, head curator and associate director of the museum, said the paragraphs that accompany the textiles give insight to the role the weavings played in preserving Mayan heritage. Lupia also said the exhibit highlights multiple languages spoken, indicating the local dialect that corresponds with each outfit.

“Some of the didactic panels talk about the importance of weaving to local economies, and some of the present day efforts by cooperatives in Guatemala to protect their heritage, because there [is] the longstanding issue of appropriation by fashion designers, like particular motifs or techniques,” Lupia said. “The tipicos tend to be very characteristic and diagnostic.”

Nicholas said the textiles were mostly collected in the 20th century.

“These are active, vibrant living cultures and sub-communities that are very much a part of the present day,” Nicholas said.

The Guatemalan people have since taken back their heritage, Orellana said, and her own children are learning about it.

The exhibit at the Sam Noble museum will be a learning tool for them to explore that culture, she said.

“Having the ability to share that with my own kids is beautiful,” Orellana said. “I couldn’t take them to all 22 [departamentos], but I can take them to Sam Noble and show them what they should be proud of.”

“Guatemalan Textiles: Heart of the Maya World” is on display through Dec. 6.