University of Oklahoma professor and author Mary Anna Evans poses for a picture. She is releasing her newest book, “The Physicists’ Daughter,” the first in a new series set during World War II, on June 7. 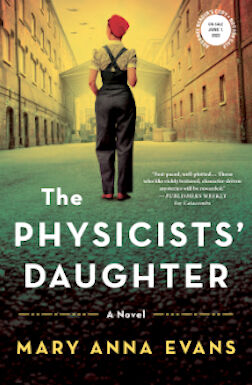 “The Physicists’ Daughter,” by University of Oklahoma professor Mary Anna Evans, will be available June 7.

University of Oklahoma professor and author Mary Anna Evans poses for a picture. She is releasing her newest book, “The Physicists’ Daughter,” the first in a new series set during World War II, on June 7.

“The Physicists’ Daughter,” by University of Oklahoma professor Mary Anna Evans, will be available June 7.

Evans’ new book, “The Physicists’ Daughter,” published by Sourcebooks Inc., follows Justine Byrne, 20, who has a Rosie the Riveter-type job in 1944 New Orleans. Raised and orphaned by physicist parents, Justine knows she is being lied to and uncovers a sabotage scheme at the factory where she works. She must use her unconventional upbringing to stop sabotage that could greatly impact the outcome of World War II.

“This book was a work of the heart,” Evans said about her new book, which will be available in print, audio and e-book wherever books are sold the day after D-Day.

Evans’ previous 13-book series was centered around archaeologist Faye Longchamp, who uncovers and solves mysteries in multiple states. The 12th book in that series, “Catacombs,” which was set in Oklahoma City, received the 2020 Oklahoma Book Award for Fiction.

A Mississippi native, Evans said she spent some time during her adult life in Gainesville, Florida, before moving to Norman for work.

She has a bachelor’s degree in engineering physics and a master’s in chemical engineering, as well as a Master of Fine Arts in creative writing from Rutgers University-Camden in New Jersey. She started teaching professional writing at OU in 2015.

Evans said she is almost finished with the second book in the new series, which will likely be released next summer.

She noted some traits that she admires about her new character.

“She is indomitable. You can’t keep her down. She had a very sheltered childhood, and then she had the worst blow ever when her parents were killed. and she has bounced back and she is still able to love and still able to rebuild a new life, and I admire that,” Evans said.

Both of her series have required a lot of historical research, including having friends knowledgeable in the related fields read the manuscripts for accuracy. For the new series, she had to research mid-20th century science and translate difficult concepts into layman’s terms.

Evans said she has always been a writer, but has only been published for about 20 years.

She’s received a lot of support in her book career from her family, including husband Tony Ain, a sister in Boston, a son in Orlando, a daughter in Phoenix and another in New York City.

Her father died before she became a published author, but Evans said he would have been proud. Her mother lived to see her first six books published and also toured some with her daughter.

“If anybody in my hometown did not know about my books, it was not my mother’s fault,” she said.

Evans said she gained further inspiration from fourth-grade teacher Penny Kochtitzky, literary novelist Ellen Douglas — whose class she audited while in college — and professors Lauren Grodstein, Paul Lisicky and Richard Aregood while she was at Rutgers University-Camden.

“It’s a very intimate work of art. You’re inviting the reader right into your own mind, or as a reader, you’re going right into the mind of someone else. and I think that’s what art does is communicate. That’s the way fiction does it,” she said.

Outside of writing and teaching, Evans enjoys playing piano, cooking, playing board games and spending time with her family.

Currently, Evans has been reading the entire works of Agatha Christie and working on “The Bloomsbury Handbook to Agatha Christie,” which is set for release in September. She also has read some friends’ works, including “For Those Who are Lost” by Julia Bryan Thomas and “Prize for the Fire” by Rilla Askew, which are both historical fiction novels.

Evans said her work at OU is a nice complement to her writing life, because it gets her out among people and students and uses another part of her brain and personality.

“I think both parts of my career help me be better at the other one,” she said.

She has also received support from her students and colleagues, including Ralph Beliveau, Deborah Chester, Gaylord College of Journalism and Mass Communication Dean Ed Kelley and Mel Odom.

During her classes, Evans said she walks students through the writing process, which includes writing a proposal before a manuscript is written and submitted. She requires her students to submit their work for publication so they can gain experience in the field.

Her most frequent writing tip is “make them feel something.”

“Your reader will go with you a lot of places if they’re emotionally engaged,” Evans said.

Additionally, she will appear in three Zoom events this month, including the following:

Those interested in buying “The Physicians’ Daughter” can find a local bookstore at bookshop.org.

Jamie Berry covers general, police and court news for The Transcript. Reach her at jberry@normantranscript.com, 366-3532 or @JamieStitches13.

• Synopsis: "Sabotage. That's the word on factory worker Justine Byrne's mind as she is repeatedly called to weld machine parts that keep failing with no clear cause. Could someone inside the secretive Carbon Division be deliberately undermining the factory's war efforts? Raised by her late parents to think logically, she also can't help wondering just what the oddly shaped carbon gadgets she assembles day after day have to do with the boats the factory builds. ... When a crane inexplicably crashes to the factory floor, leaving a woman dead, Justine can no longer ignore her nagging fear that German spies are at work within the building, trying to put the factory and its workers out of commission. ... Justine draws on the legacy of her unconventional upbringing to keep her division running and protect her coworkers, her country, and herself from a war that is suddenly very close to home."

The following is a short excerpt from the beginning of Mary Anna Evan's new book, "The Physicists' Daughter":

Justine Byrne liked taking out the trash. It was her favorite part of the workday.

Her factory work was monotonous by design. She understood that, and she was more or less resigned to it. The whole point of an assembly line was efficiency, and efficiency apparently required a whole lot of people to do the same thing, over and over, all day and every day. Monotony got the job done.

Since the world was at war, and her job was to build war machines that would fly and float the Allied troops to victory, Justine was happy to stand at her station all day and every day, plucking parts off an endlessly moving conveyor belt and bolting them together. Well, mostly happy. Daydreams of romance and faraway places helped the long days pass.