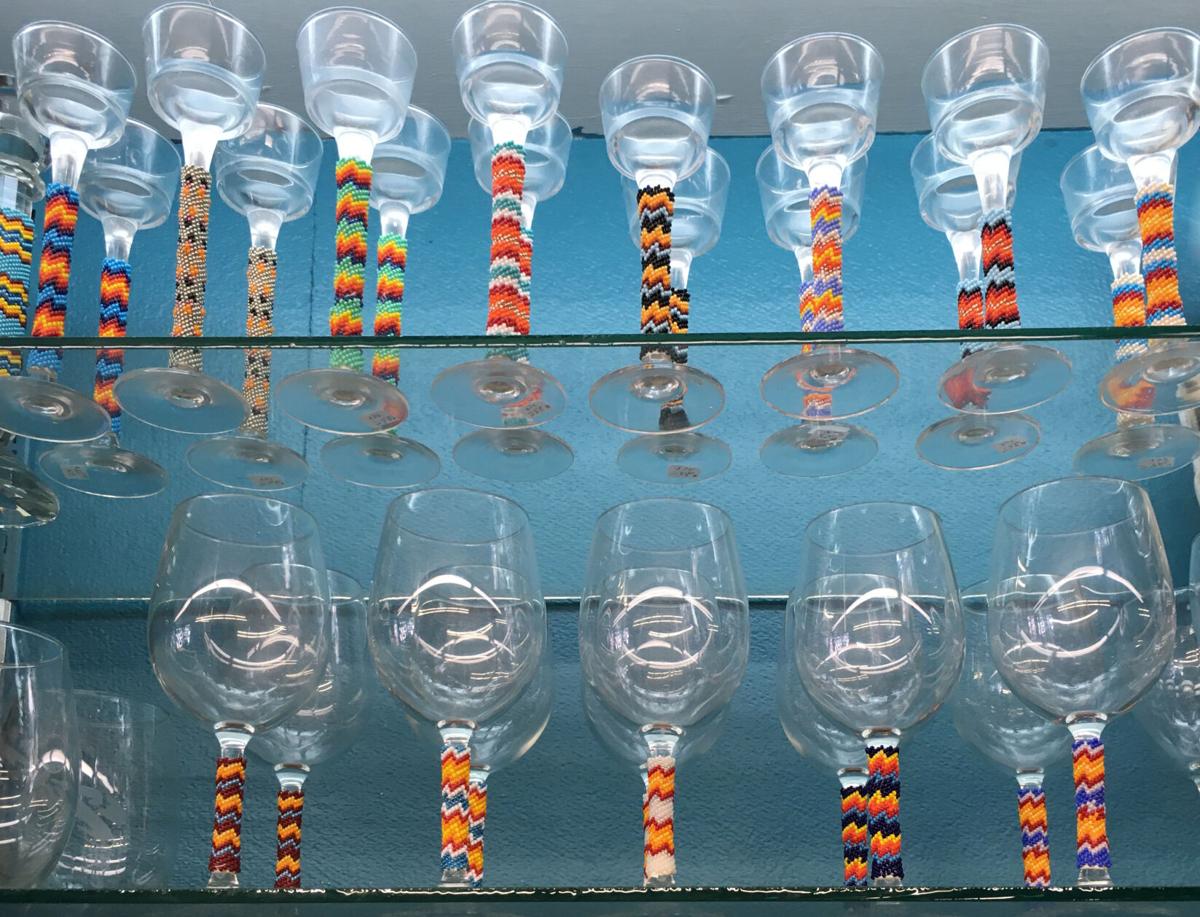 Beadwork by Teena Tullis decorates the stems of glassware. 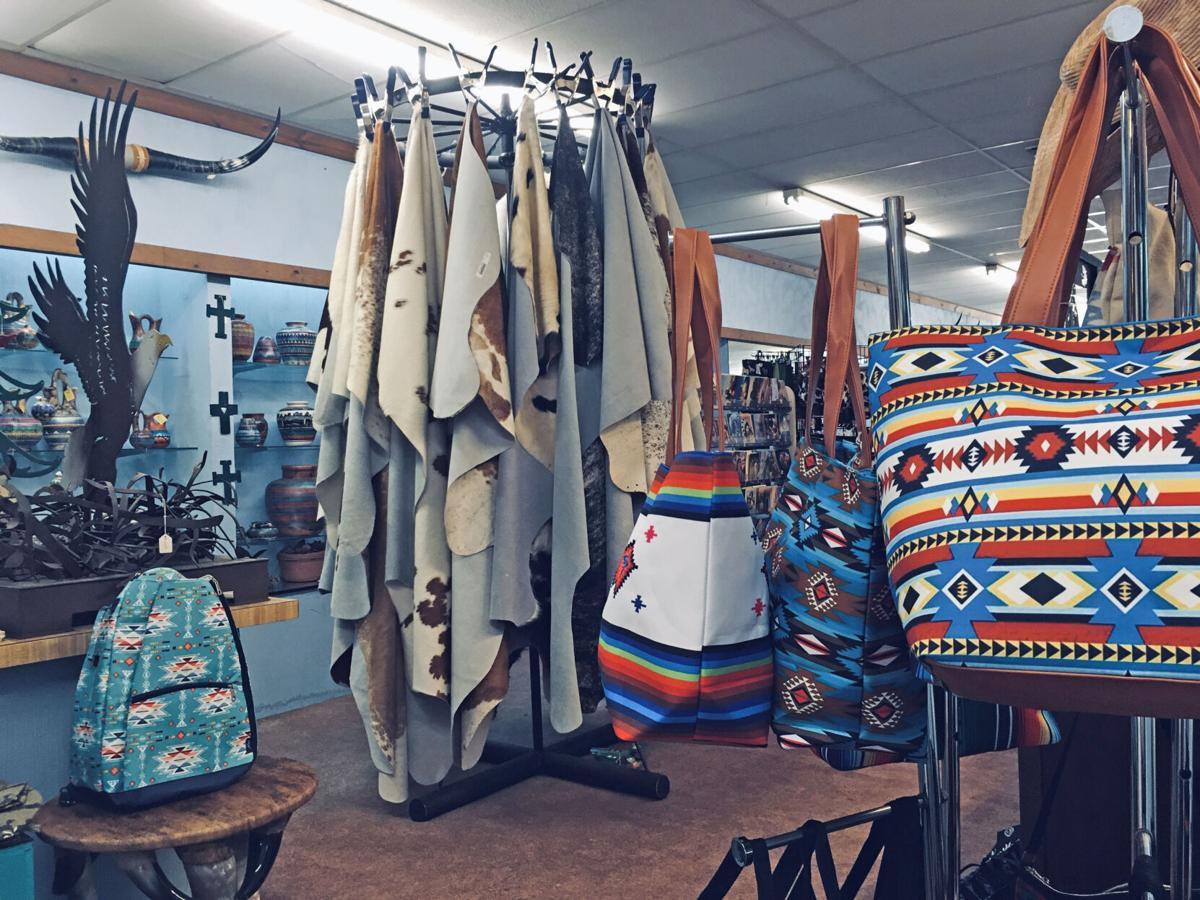 From leather to backpacks and bags, the Cha’ Tullis Gallery carries a wide variety of items. 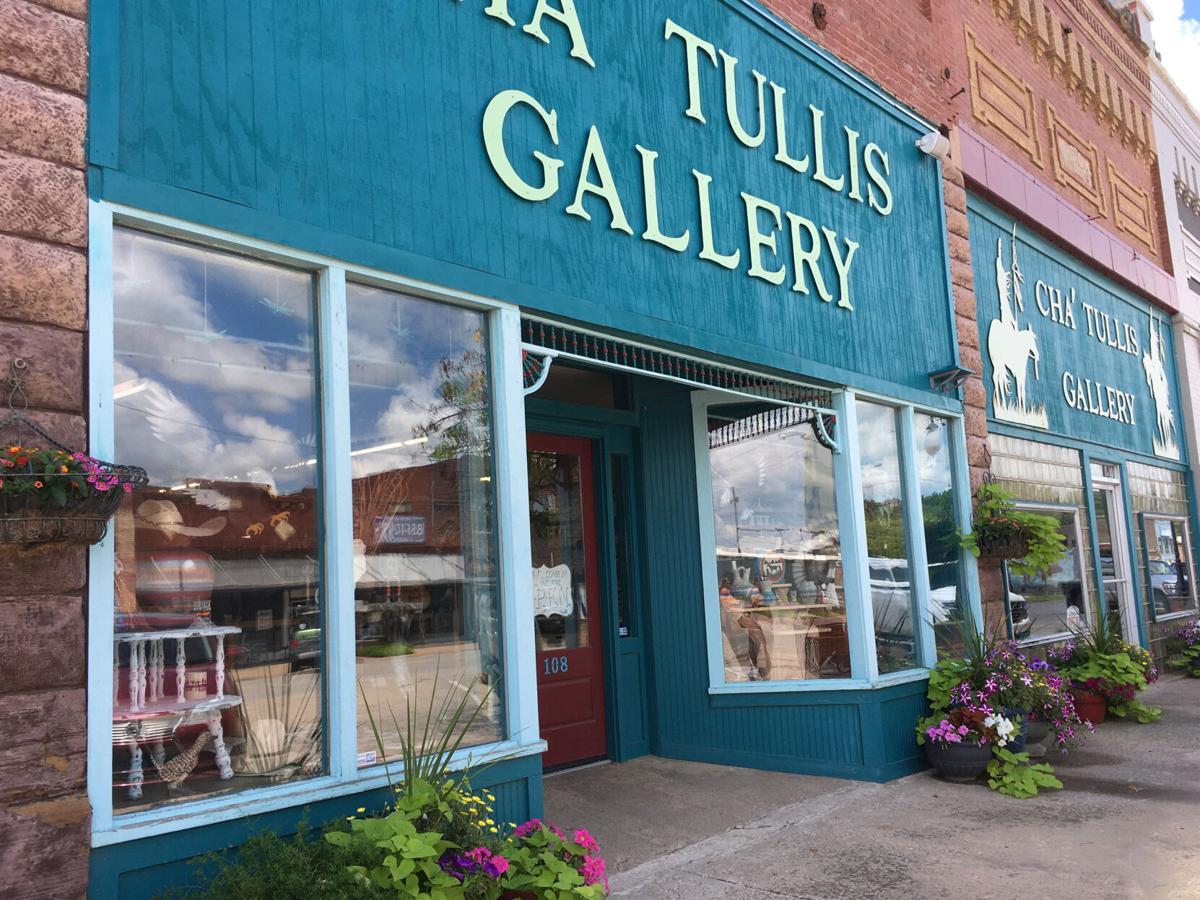 The colors of the storefront, accented by polychrome plantings, welcome guests to the Cha’ Tullis Gallery. 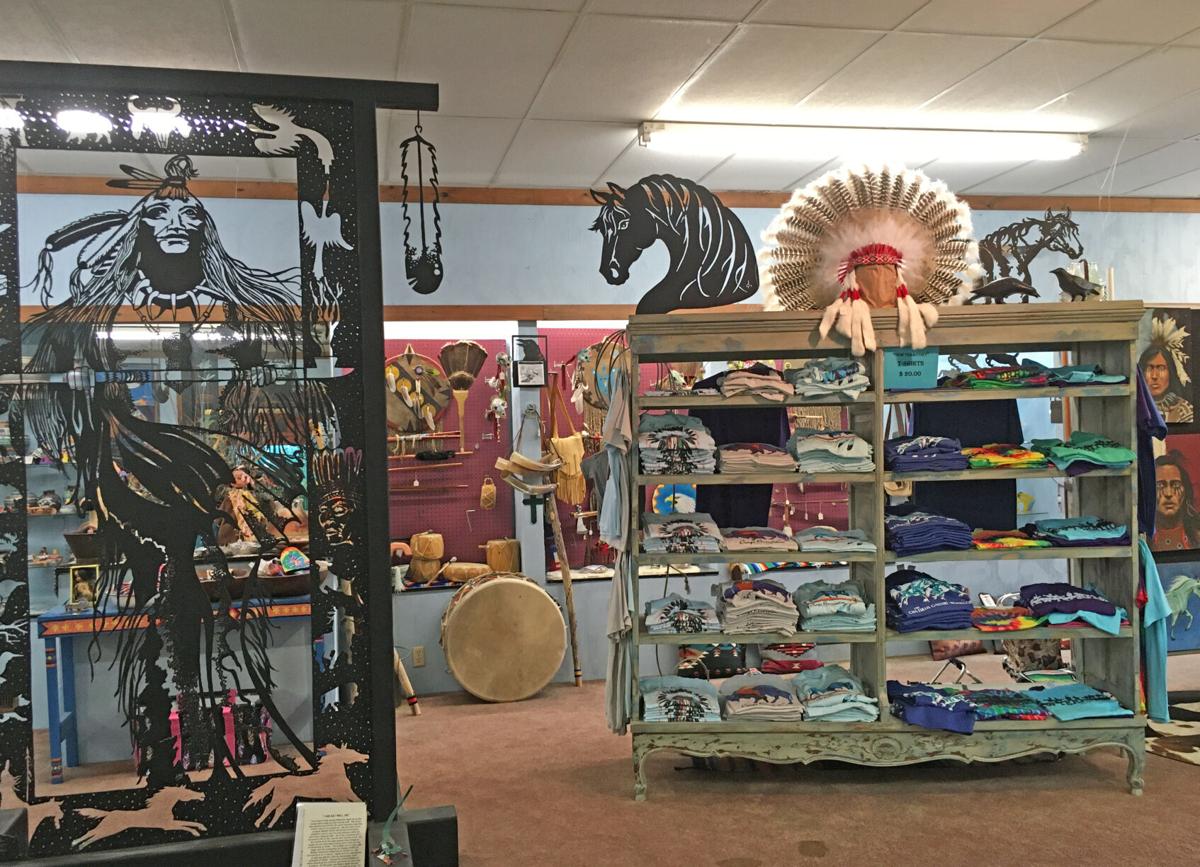 The large piece on the left and the horses on the shelves are examples of Cha’ Tullis’ skill with metalwork. 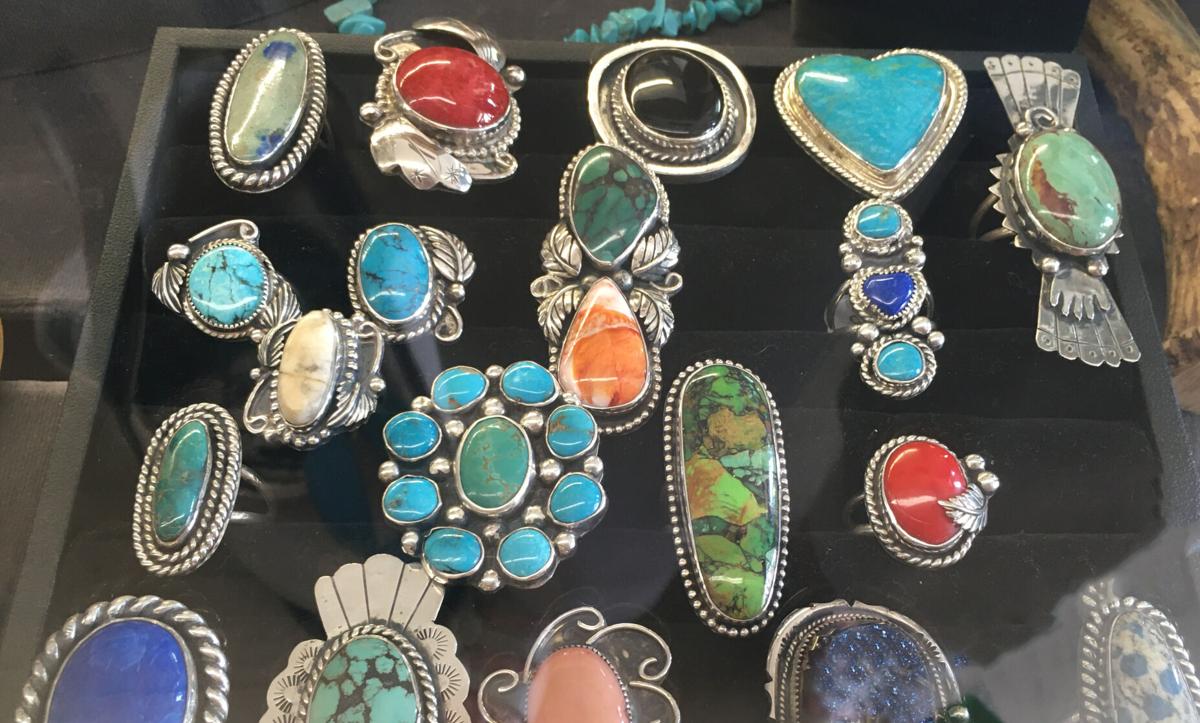 Jewelry making is just one of Cha’ Tullis’ many talents. 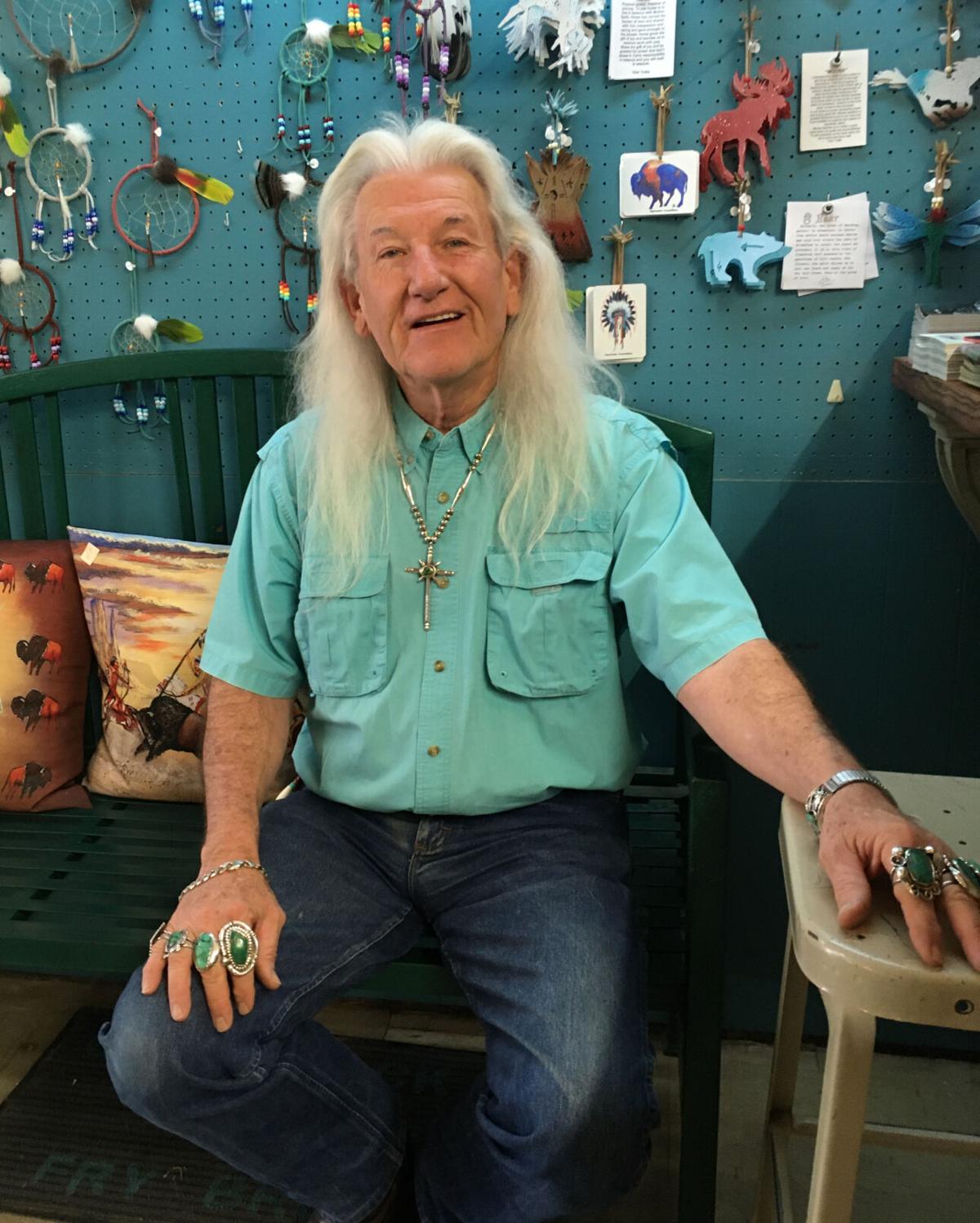 With rings on his fingers, Cha’ Tullis is a walking advertisement for his art.

Beadwork by Teena Tullis decorates the stems of glassware.

From leather to backpacks and bags, the Cha’ Tullis Gallery carries a wide variety of items.

The colors of the storefront, accented by polychrome plantings, welcome guests to the Cha’ Tullis Gallery.

The large piece on the left and the horses on the shelves are examples of Cha’ Tullis’ skill with metalwork.

Jewelry making is just one of Cha’ Tullis’ many talents.

With rings on his fingers, Cha’ Tullis is a walking advertisement for his art.

Folks in Hominy, Oklahoma, have grit — but that’s not where the town got its name.

In the 1870s, when the Osage Indians were moved out of Kansas, they purchased land from the Cherokees. Some of them settled near a small creek that they named for their tribal leader, Ho’n-Mo’n-I’n (translates to “Walks in the Night”).

A small settlement named Hominy grew up near there, about as close to proper pronunciation as the white settlers could manage. The land became Osage County, Oklahoma’s largest county.

The town of Hominy enjoyed ups and suffered downs over the years. The railroad came and went; oil boomed and busted.

Today, the population is between 3,000 and 4,000. The Fred and Addie Drummond home here is part of the Oklahoma History collection.

But Jack and I were here for another reason — to meet the artist, Cha’ Tullis.

The first thing I noticed about Cha’ (pronounced Chay) was his flowing white hair. This was quickly followed by a survey of his kind eyes and his ready smile. Only then did I take in all the wonderful things in his gallery.

Though raised in Osage County, Cha’s heritage is Northern Blackfoot and Cherokee.

Of his childhood, he says, “We were poor. We had a two-hole outhouse, but we were richer than our neighbors. They only had one hole!”

Cha’ was born an artist and has memories that go back almost to his birth. He sold his first painting when he was 2 years old. It was a watercolor of a black horse with a white mane and forelock.

A lady named Ida Baugh bought it for $5. The young artist spent all his money on nickel Hershey bars.

Cha’s talent was obvious to his teachers, and they encouraged him. At the end of the year, when he was in the third grade, his teacher Mrs. Stultz told his classmates that if they didn’t want their leftover crayons, paper, pencils and watercolors, they could leave them in a basket so she could give them to someone.

Cha’ was that someone. Mrs. Stultz told him he didn’t have to tell anyone, but word got around the school, and every year after that, his teachers would do the same thing.

Cha’ was smart and made good grades. By the time he was in high school, he was so far ahead of everyone that the only classes he had to take were English and history.

“I had an awesome art teacher. She gave me all the supplies. She gave me the pony and handed me the reins and said, ‘Ride that,’ and I did,” he said. “She made up classes for me. I was taking pottery, commercial art, cartoon art, oil painting and ceramics. I went to school, but I did art.”

Many towns across Oklahoma are putting up murals — it’s a trendy thing now. I remembered that Hominy was known for its murals and that Cha’ had painted them.

Cha’ was before his time. His murals weren’t meant to be trendy or a draw for tourists. He painted his first in 1990.

The way he tells it, “Everybody’s business was rotten. I went into the Pioneer Store here to pay a bill. The little old lady who had worked for them for maybe 50 or 60 years had always been so kind and happy. But everyone was depressed and worn out from the oil bust. When I left there I thought, ‘I need to brighten Virginia’s day. So my first mural was right across the street from the window she looked out.”

Before he was finished, Cha’ had painted about four dozen murals around downtown. That first mural is gone — the building burned down. But you can still see about 40 of his creations.

Some of his last murals, painted in 1995, stretch across a wall by the Sonic where Jack and I had lunch. Many are faded now. I asked him if he was tempted to repaint them, but he said they were meant to get old.

“Once they’re gone, it’s time for a new generation to paint what is important to them,” he said.

Today, he stays busy creating work for his gallery. The shop is quite large — multiple rooms are filled with Native American and Western items.

In addition to Cha’s paintings, metal creations and jewelry, there’s pottery from New Mexico and jewelry made by Navajo artists.

You’ll find items of clothing, leather, purses, duffle bags and backpacks with Native American motifs, and all sorts of decorative pieces. There truly is something for everyone — and a wide variety of prices.

Small dream catchers are made by Cha’s grand-daughters. Beadwork is done by his wife, Teena.

Cha’s metalwork pieces range from small decorative and utilitarian pieces in the store to a massive piece atop a hill west of town. Two hundred feet long with 15 19-foot tall figures of Native Americans, the sheet iron sculpture is a do-not-miss sight in Hominy.

Back in the store, I was taken by a large, standing metalwork piece depicting a Native American surrounded by cutouts of animals important in the cultural and religious life of Native Americans.

A small placard at the base bears an explanation of the images with a very personal statement: “As life goes and Elders teach, we are shaped into what our Creator intended us to be. To the Elders that have shared in my journey and to my Creator I say, ‘Thank you’ — ‘I AM AS I WILL BE’ and as you intended.”

With Cha’, you’ll get art and philosophy.

A visit to his gallery is a real treat.

The best days to catch him are Fridays and Saturdays.

Other days, he’s apt to be in his studio working on more pieces.

Hominy is less than a two hours’ drive from Oklahoma City. The Gallery is open from 10 a.m. to 5 p.m. Monday through Saturday at 108 W. Main St.