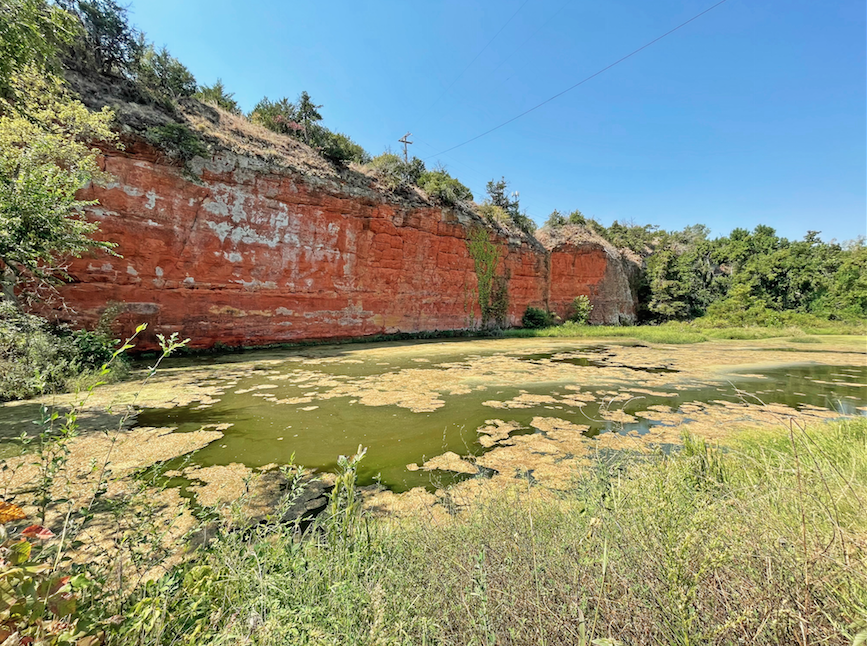 A small pond on the canyon floor provides a convenient fishing spot. 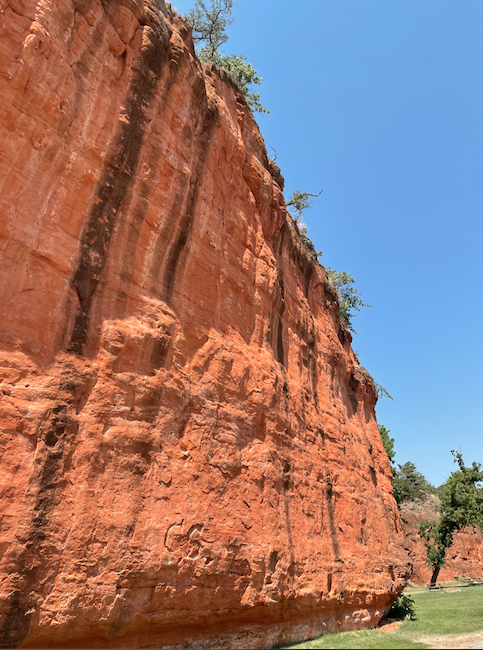 Oxidized minerals give the rocks a red color; darker, vertical stripes are caused by deposits of manganese oxide during weathering or lichen. 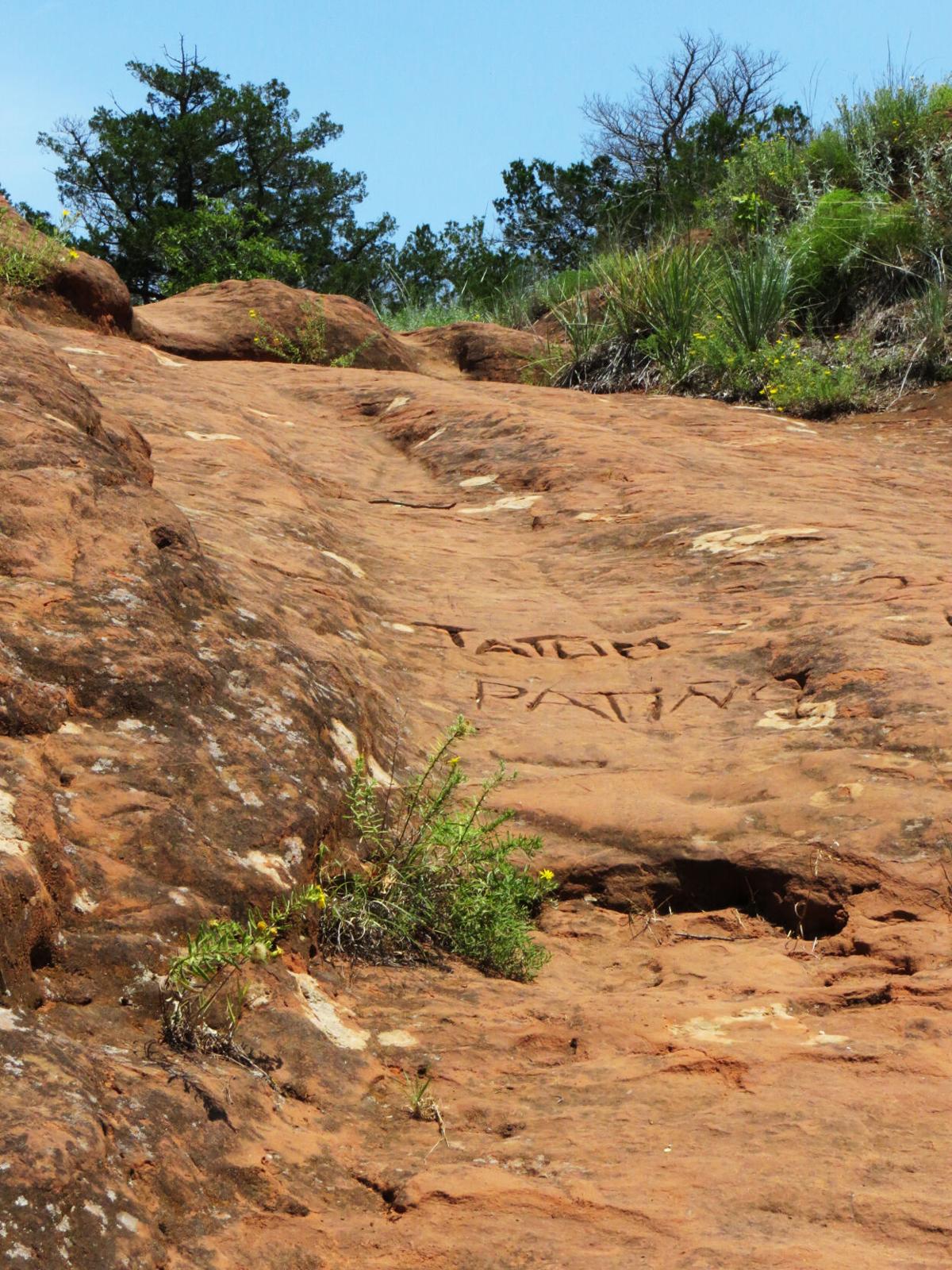 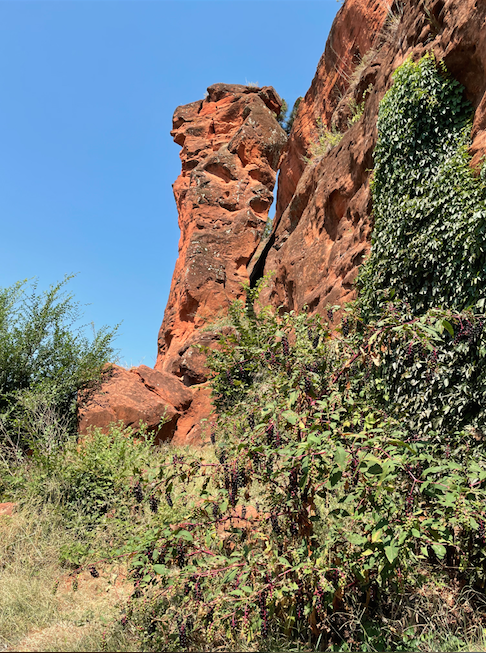 Balancing Rock was created by erosion and widening of a joint in the canyon wall. 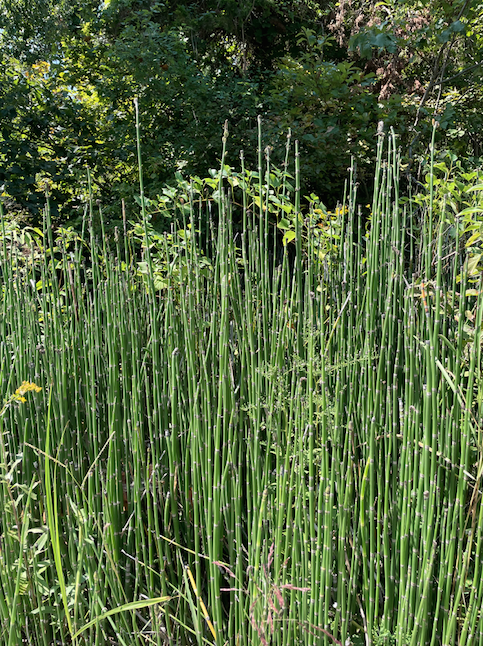 From prehistoric times, the canyon has been part of the homelands of Plains tribes of Native Americans, who used these rush-like plants with high silica content for scouring or polishing vessels.

A small pond on the canyon floor provides a convenient fishing spot.

Oxidized minerals give the rocks a red color; darker, vertical stripes are caused by deposits of manganese oxide during weathering or lichen.

Balancing Rock was created by erosion and widening of a joint in the canyon wall.

It was 1849. News of a big gold strike in California had spread east, setting off the biggest mass migration in American history.

Missouri River towns — Independence and St. Joseph in Missouri, Nebraska City and Omaha in Nebraska — were major points of origin for the California Trail.

Further south, an alternate route was established, leaving from Fort Smith, Arkansas. This, the California Road, passed through Oklahoma.

After the grueling trek across the hills and prairie, Red Rock Canyon, with its shady trees and fresh water, provided welcome shelter and respite — and a good place to make necessary repairs to wagons and equipment.

The most outstanding feature of the canyon is its tall walls of Rush Springs Sandstone. The rock dates back to the Late Permian age, 250 to 270 million years ago.

The red color of the rocks is the result of the staining of sand grains, which are primarily translucent quartz, by a thin coating of oxidized iron minerals, mostly hematite.

The canyon itself is much younger — geologists differ on the possible age. Physically, it is about two-and-a-half miles long, with a box-head area and tall cliffs tapering out at the other end.

About 80 feet wide at the head, it widens to 750 feet at the mouth. The canyon walls range from 40 to 60 feet above the floor. This makes the canyon one of the favorite spots for rappelling.

The little stream that runs through the canyon is a tributary of Sugar Creek. It is supplemented by small springs, which seep through the sandstone. Geologists assume that the stream was much larger at one time, indicating a wetter climate, perhaps during the Ice Age (2.6 million years ago-11.7 thousand B.C.).

Although the glaciers did not reach as far south as Oklahoma, they would have created cooler temperatures and more precipitation.

The canyon is actually much deeper that it appears. Over the millennia, erosion has caused the breakdown of boulders into smaller rocks and sand, which fell into the bottom of the canyon.

One of the coolest features in the canyon is Balancing Rock, a sandstone spire once part of the canyon wall.

Balancing Rock is the subject of one of the canyon’s best dumb and dumber stories.

An adventurer on the canyon’s rim looked across the crevice to the top of the rock and decided to jump over to it. He must have been feeling pretty good about his accomplishment until it dawned on him that he couldn’t jump back up. Stranded, he hollered for his friends.

Finally, someone heard him and headed out of the canyon to the park office. It took a call to the Hinton Fire and Rescue squad to get him down. No fine was assessed, but no doubt his feat was the butt of many jokes.

Like the 49ers, today’s visitors find the canyon a refreshing spot to set up camp — or RV — or, like Jack and I, to find a pleasant spot for a picnic.

The amenities include four bathrooms scattered through the park — two with showers, playgrounds, picnic tables, pavilions and, in summer, a swimming pool. There are also six hiking trails ranging in length from six-tenths of a mile to four miles.

My favorite trail is the short, looping Rough Horsetail Nature Trail. You’ll see several stands of these horsetail reeds near the trailhead.

Related to Paleozoic calamites, tree-sized plants that could reach over 100 feet in height, the plant is also called scouring rush, and was used by Native Americans to scour pots and kettles.

Among the trail’s features is a little bridge crossing a small stream. There’s little elevation change in the trail, making it fairly easy.

The do-not-miss trail is the California Road Trail. I’ve never walked the whole trail — only far enough to see the wagon ruts in the sandstone. The only wheelchair-accessible trail is a paved path just over half a mile, near the road on the canyon floor.

A small pond offers a sweet spot for fishing in the park — an Oklahoma fishing license is required for those over 16. The pond is stocked with bluegill, bass and catfish.

When we were there a couple of weeks ago, there was a great deal of algae on the water. I asked how that affected the fishing. The answer was, “It may weigh your line down, but you can still catch a lot of fish.”

For birdwatchers, permanent residents of the canyon include owls, turkeys, belted kingfishers and several species of woodpeckers. Through fall and winter, you may spot warblers, kinglets, cedar waxwings, wrens, towhees, juncos and numerous species of sparrows.

In the past, Jack and I have watched cliff swallows swooping over the pond, but they must have been taking a siesta when we were there.

The cliffs are also popular spots for rappelling. It’s strictly BYOE — bring your own equipment — and you will need to sign a release at the park office before proceeding.

The now-privately-owned Red Rock Canyon Adventure Park is open from 9 a.m. to 5 p.m. Sunday through Tuesday and 9 a.m. to 8 p.m. Wednesday through Saturday.

Admission is $10 per car up to five people, $2 for each extra person. Motorcycle admission is $5. The park is approximately 70 miles from Edmond.