Council will be asked to approve homeless shelter contract 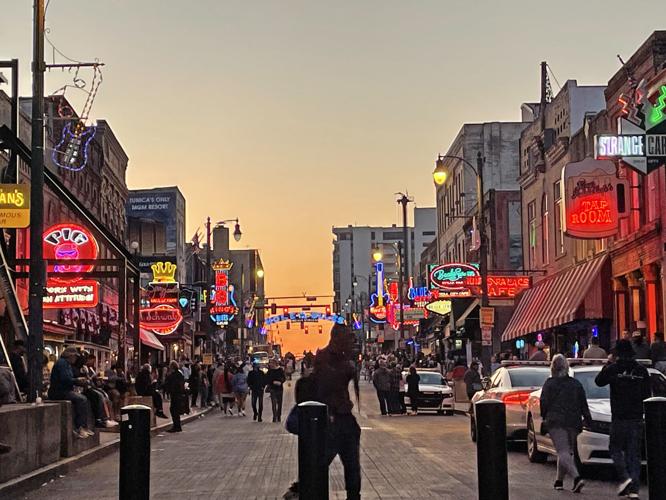 Beale Street, Memphis’ most famous street, has long been a center of Memphis music. 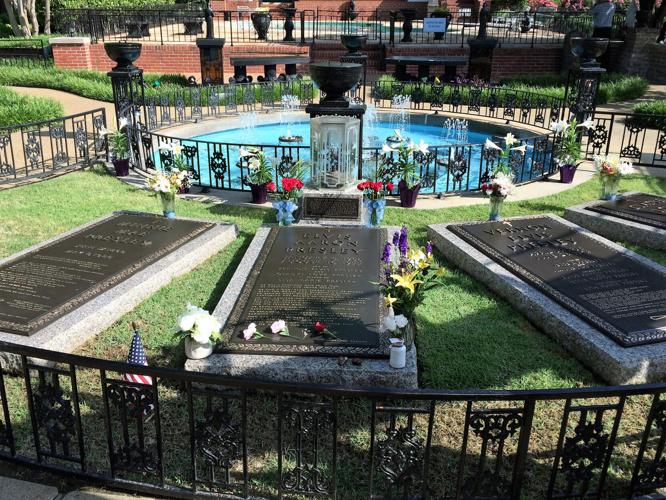 Elvis Presley and his mother, father and grandmother are buried in the Meditation Garden beside his Memphis home, Graceland. 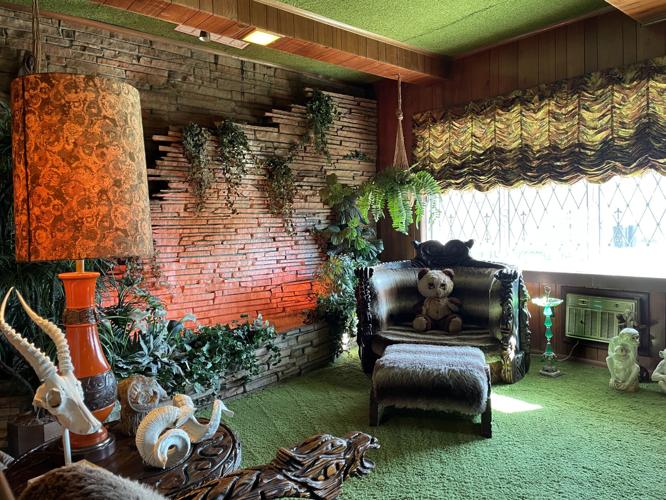 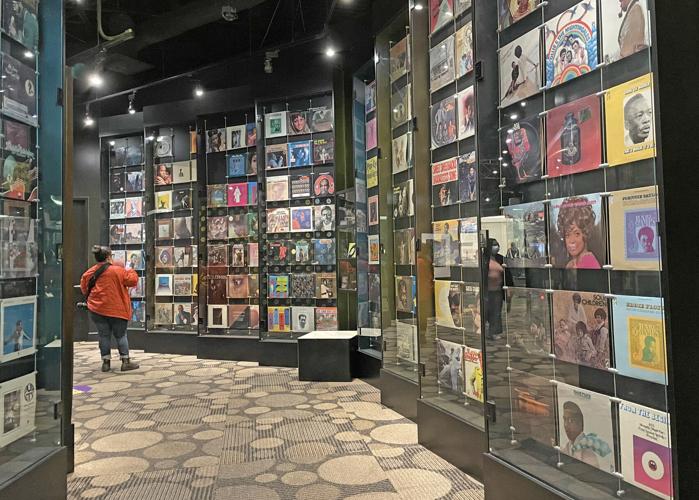 Covers of albums made at Stax line the walls of this hall in the Stax Museum of American Soul. 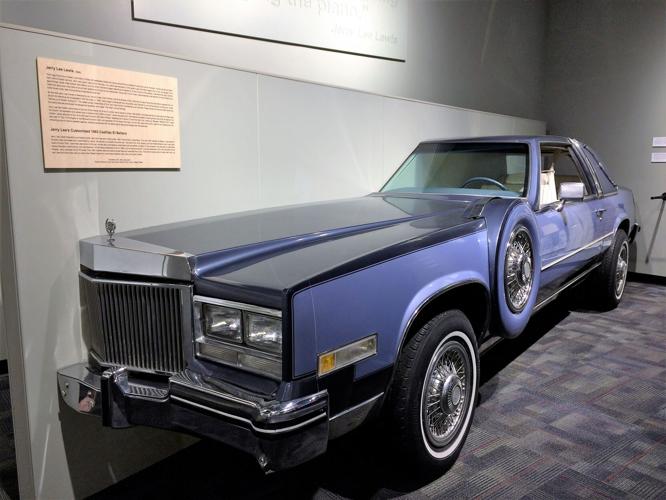 Two-thirds of Jerry Lee Lewis’ 1983 Cadillac El Ballero is on display at the Memphis Music Hall of Fame. The other third can be seen in Jerry Lee Lewis’ Café and Honky Tonk a couple of blocks east on Beale Street. 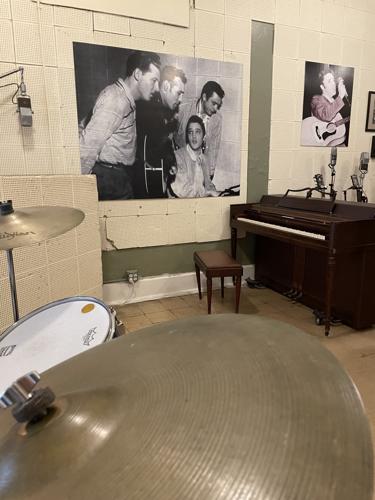 The picture of the “Million Dollar Quartet” hangs on the wall in the picture next to the piano, also pictured. The drum set in the foreground belonged to U2.

Beale Street, Memphis’ most famous street, has long been a center of Memphis music.

Elvis Presley and his mother, father and grandmother are buried in the Meditation Garden beside his Memphis home, Graceland.

Covers of albums made at Stax line the walls of this hall in the Stax Museum of American Soul.

Two-thirds of Jerry Lee Lewis’ 1983 Cadillac El Ballero is on display at the Memphis Music Hall of Fame. The other third can be seen in Jerry Lee Lewis’ Café and Honky Tonk a couple of blocks east on Beale Street.

The picture of the “Million Dollar Quartet” hangs on the wall in the picture next to the piano, also pictured. The drum set in the foreground belonged to U2.

If Nashville made its musical bones on country music, Memphis became a music mecca with blues on Beale Street in the early 1900s.

Later in the 20th century, Sam Phillips, Sun Records and Elvis Presley ushered in the era of rock ‘n’ roll, rock-a-billy and rhythm and blues. Stax Records celebrated soul. and now, the town rollicks with rhythm and shakes with sound.

I began my explorations in Memphis music with a pilgrimage to pay homage to The King. Yep, Graceland, that temple of over-the top taste and Elvisian excess.

Elvis bought the mansion in 1957, redecorating several times. It’s easy to dis the décor. I had to keep reminding myself of the year, and the fact that I, too, had green shag carpet. Still do, just not on the ceiling. and the harvest gold refrigerator and the avocado sink in the kitchen also called back memories.

The living room features antiqued, mirror tiles and fireplace on one wall, white carpet and white upholstery. Windows are framed with heavy, royal blue, velvet drapes. Through a wide opening, flanked by clear glass and stained glass peacocks, visitors can see a white grand piano in the music room.

A large, Italian chandelier hangs over the dining room table set with Elvis and Priscilla’s Noritake “Buckingham” wedding china. Elvis, who placed much importance on family dinners, always sat at the head of the table.

Competing in the category of most outré interior design would be the Jungle Room and the Pool Room. The Jungle Room, inspired by Elvis’ visits to Hawaii, is carpeted in green shag, floor and ceiling. The Pool Room resembles a Middle Eastern tent with walls and ceiling covered with 450 yards of wildly-patterned, pleated fabric.

Outbuildings house more Elvis memorabilia. The Trophy Building offers family history, gifts given to Elvis, personal effects, photos and more. This is where you’ll get a feel for what a fine person Elvis was.

Last stop is the pool area and the Meditation Garden. Here, Elvis, his mother, father and grandmother are buried.

As press, I was given the VIP tour, a more extensive tour than I had previously taken. This tour includes an area where Elvis’ father and stepmother lived. It now holds a collection of Elvis’ jewelry and personal items. Elvis obviously loved gold — gold jewelry, gold plated guns, gold-framed sunglasses and even a special golden Social Security card.

We were also allowed in the archive building. Walls are covered with photos and cabinets holding more memorabilia. One of the most interesting items was Elvis’ first mobile phone. Obsessed after watching James Bond (“From Russia with Love”), Elvis paid between $3,000 and $4,000 for the 18-pound instrument. The other special treat was the opportunity to put on cotton gloves and pose for a picture with one of Elvis’ D76 Martin guitars.

Following the home tour, my hosts and I headed for Elvis Presley’s Memphis Entertainment Complex. Museums here displayed everything from Elvis’ car collection, his costumes, films, gold records, time in the Army – basically all things Elvis.

I’ve enjoyed his music, but this visit made me appreciate him so much more as a person and humanitarian. and he didn’t broadcast his charity or fame. The only award he ever accepted in person was being named one of the nation’s 10 Outstanding Young Men, awarded in 1971 by the Jaycees for his impact on music and culture and his many charitable activities.

It was Sam Phillips’ recording studio where a young Elvis walked in to make a record for his mama. He subsequently made many records for Sun. The small museum is packed with information about Phillips and a whole slew of stars who got their starts with this label.

How cool to see the “Million Dollar Photo” of Elvis, Johnny Cash, Carl Perkins and Jerry Lee Lewis in an impromptu jam session in the very room where it took place.

The Stax Museum of American Soul is a much slicker facility, also packed with exhibits about names everyone knows: Aretha, Isaac Hayes, Al Green, Otis Redding and others. I knew Donald “Duck” Dunn and Steve Cropper from The Blues Brothers movie, but learned more about their association with Booker T. and the M.G.s.

One of my favorite exhibits — easy to miss amid all the glitz — was a map of the area around the Stax Museum showing where various musical artists lived. The amount of talent in that small community was astounding.

In addition to Aretha Franklin, there were names I didn’t recognize — including Memphis Slim, Reverend William Herbert Brewster and Lucie E. Campbell — who are recognized in the Memphis Music Hall of Fame.

Between my trips to Nashville and Memphis, I was learning so much more about American music. But I wasn’t through learning — there were two more museums with more to see and hear.

The Memphis Rock and Soul Museum, in the FedEx sports and entertainment complex, takes the story of rock and soul from the cotton fields to the pinnacles of fame. With exhibits created by the Smithsonian Institution, displays highlight Memphis’ musical history from the 1930s through the 1970s. A digital audio tour guide supplies lots of extra information and over 100 pieces of music.

My last stop was the Memphis Music Hall of Fame, just a short walk away. Tucked between the Hard Rock Café and legendary clothiers Lansky’s, the Hall of Fame salutes nearly 100 musical standouts who have been connected to Memphis.

You can go from A to Z — Aretha to ZZ Top — to learn about musicians of all genres, including opera star Marguerite Piazza. Artifacts range from outrageous outfits to a destroyed piano, but my favorite is two-thirds of one of Jerry Lee Lewis’ Caddys.

End a day with stroll down Beale Street, where it all began. Music pours out over the street from multiple venues. The throb of the bass and the beat of the drums are the heartbeat of the city.