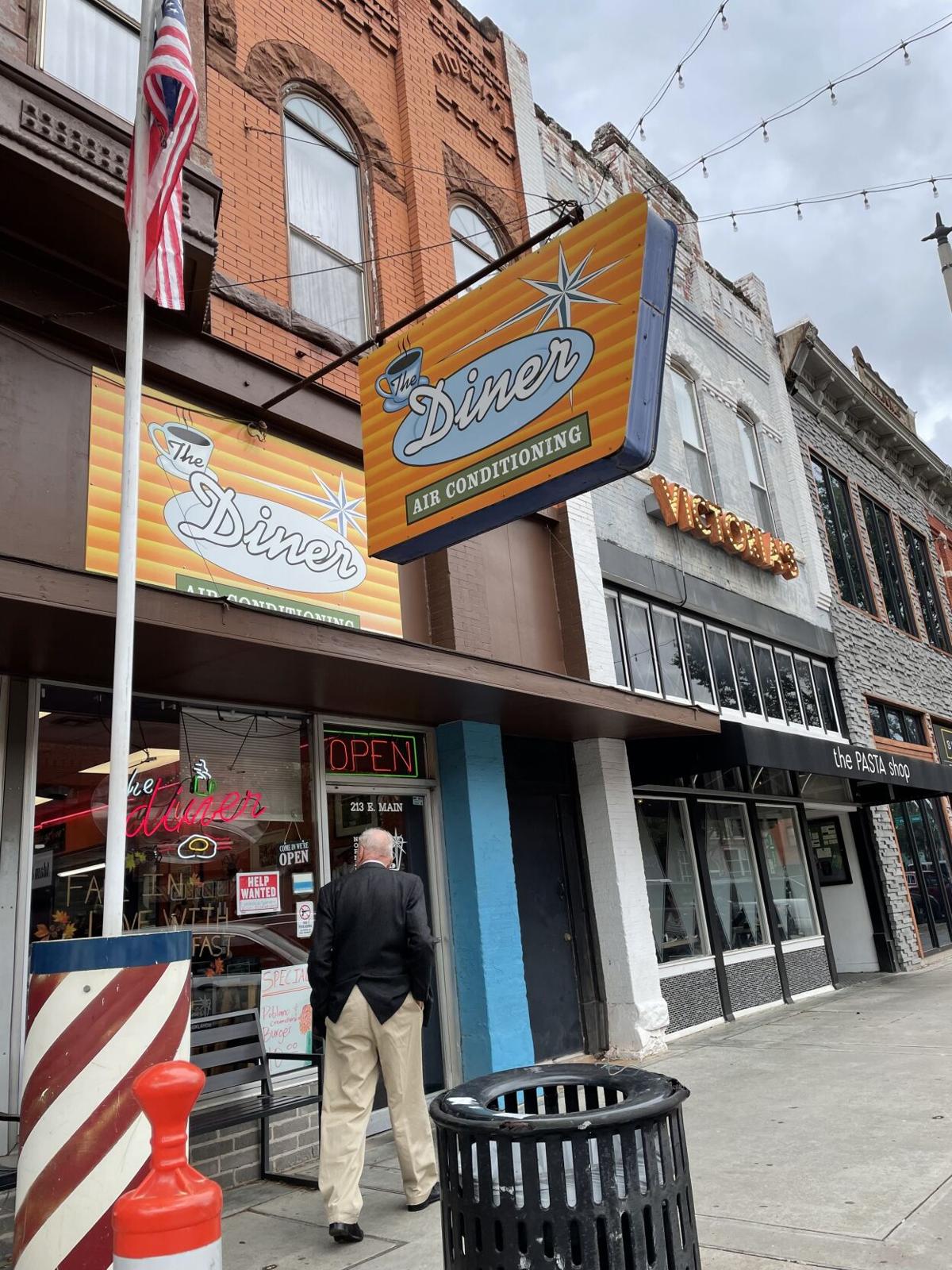 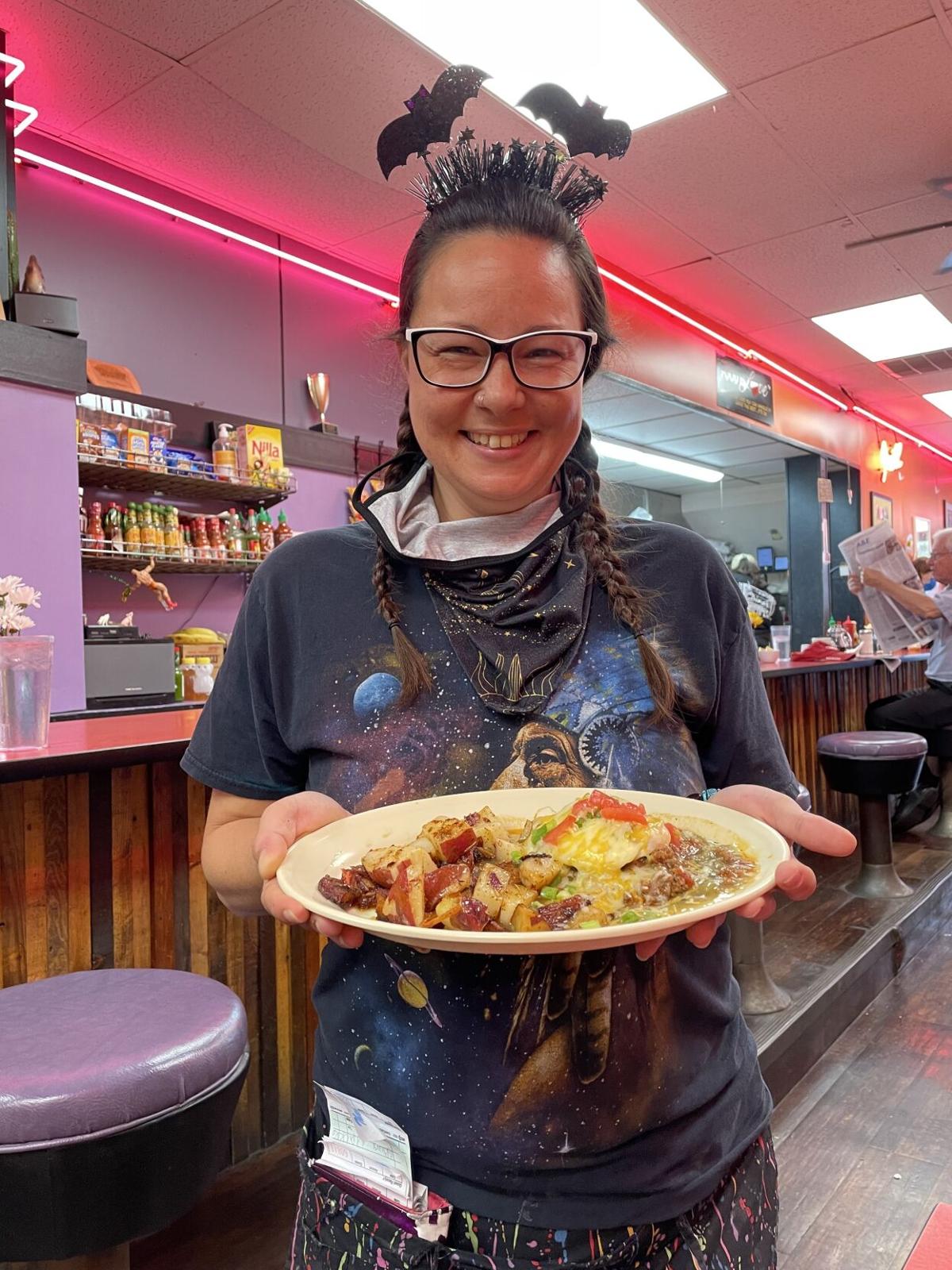 Melissa Wilson serves her customers with enthusiasm and a smile at The Diner in Norman. 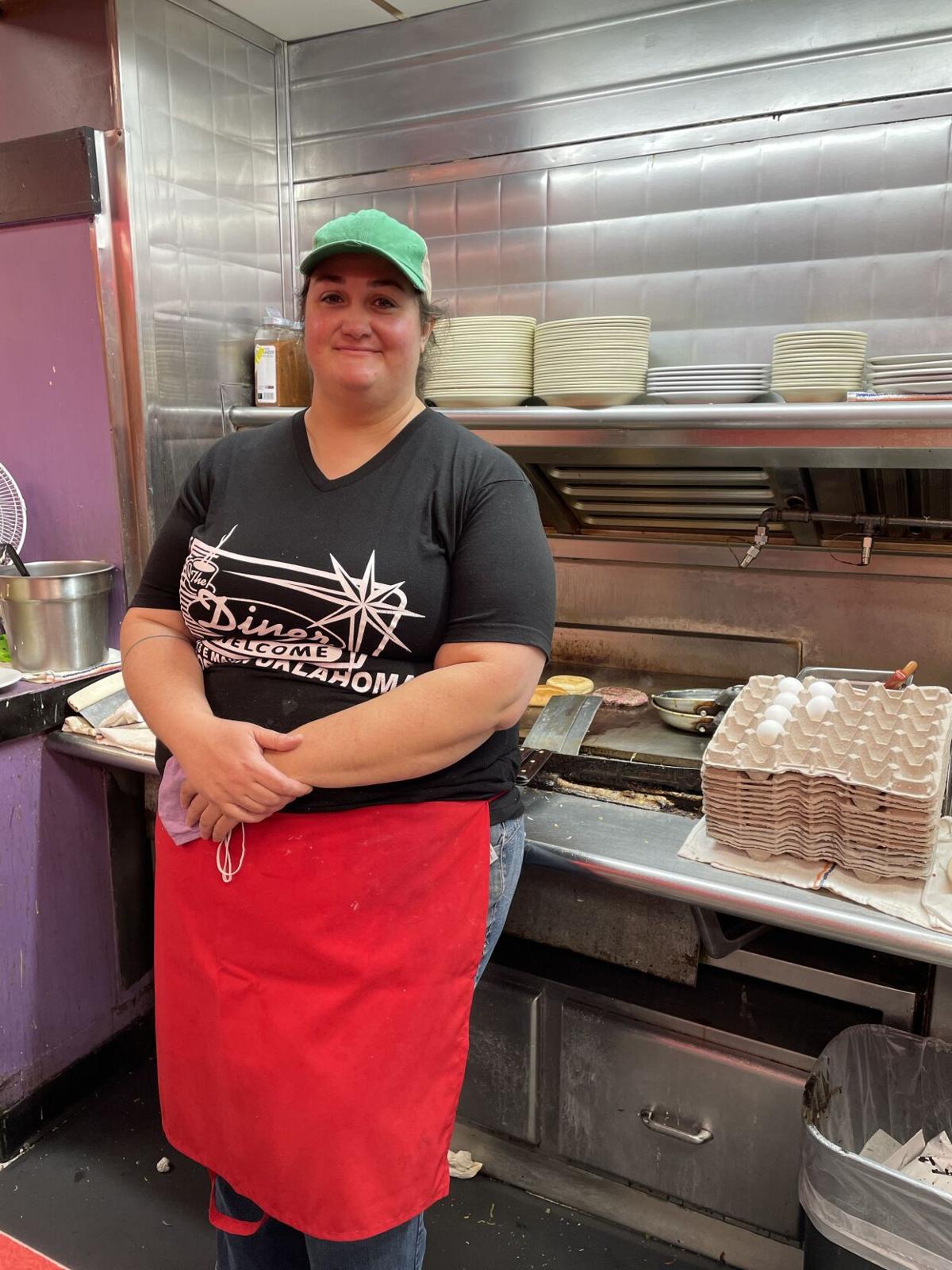 Bonnie Amspacher is the fourth generation to make and serve the secret family chili recipe at The Diner in Norman. 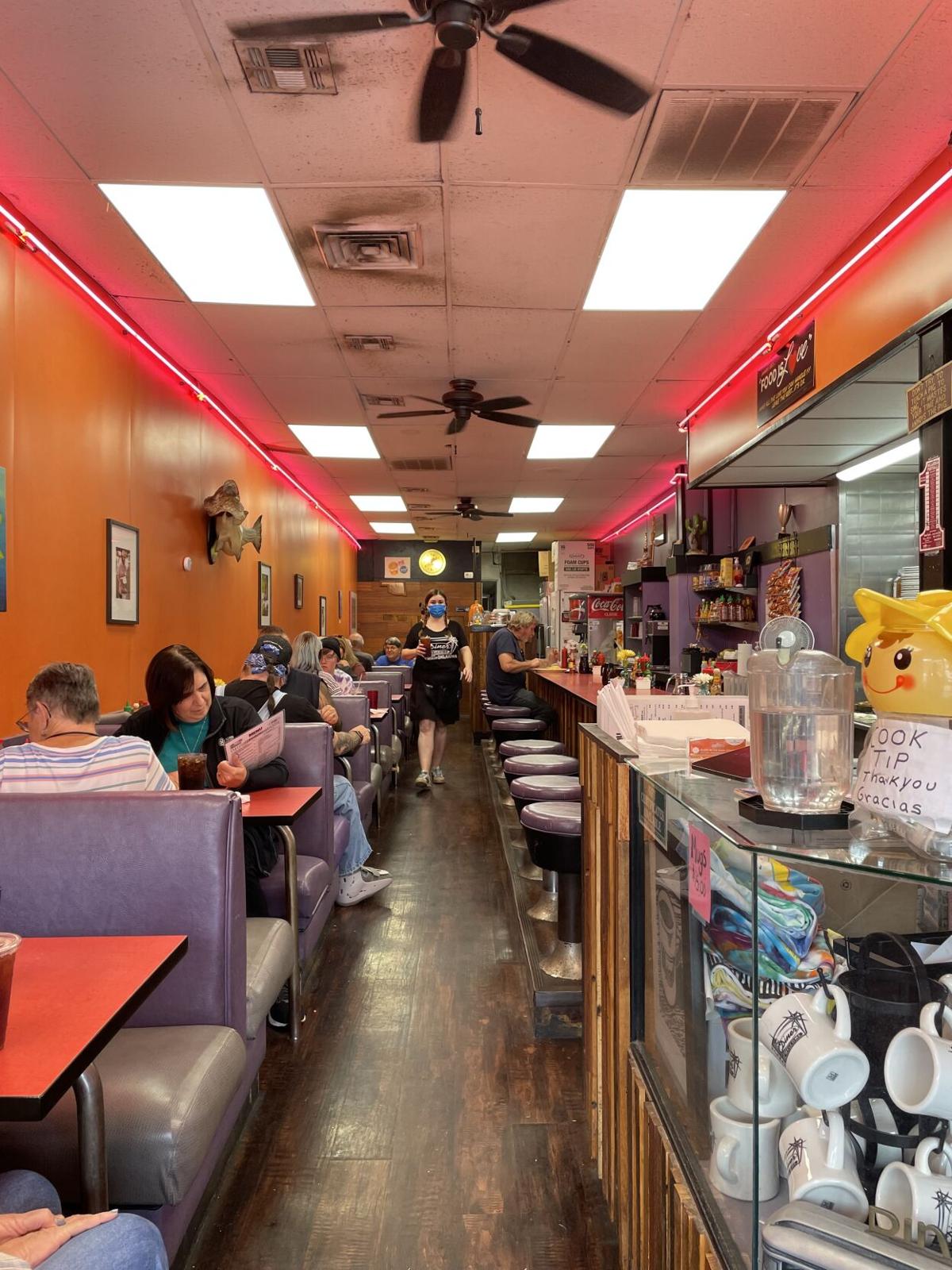 The Diner’s small interior is space-efficient, so get here early or get in line. 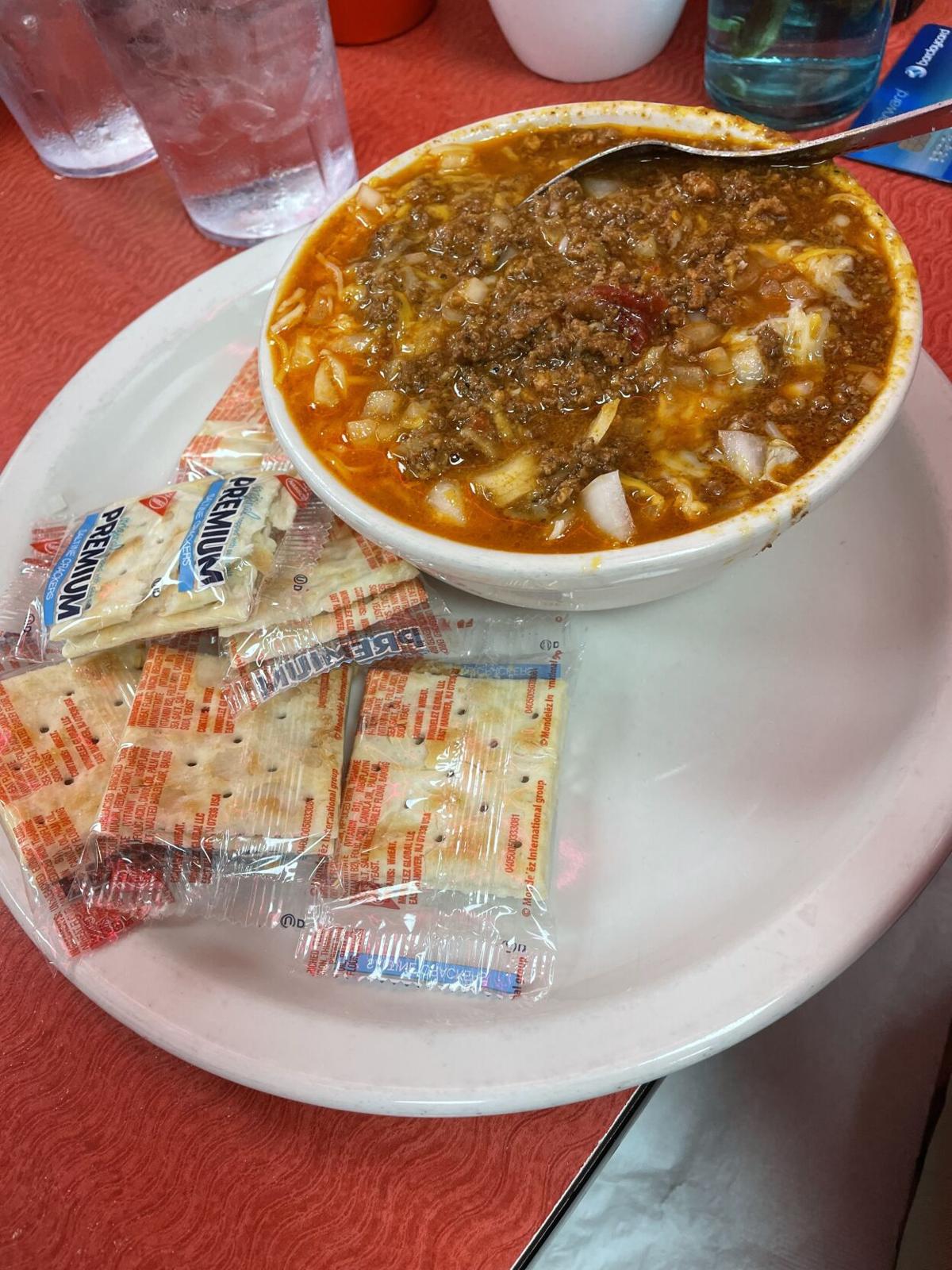 The Diner’s chili is rich with freshly-ground Black Angus beef. 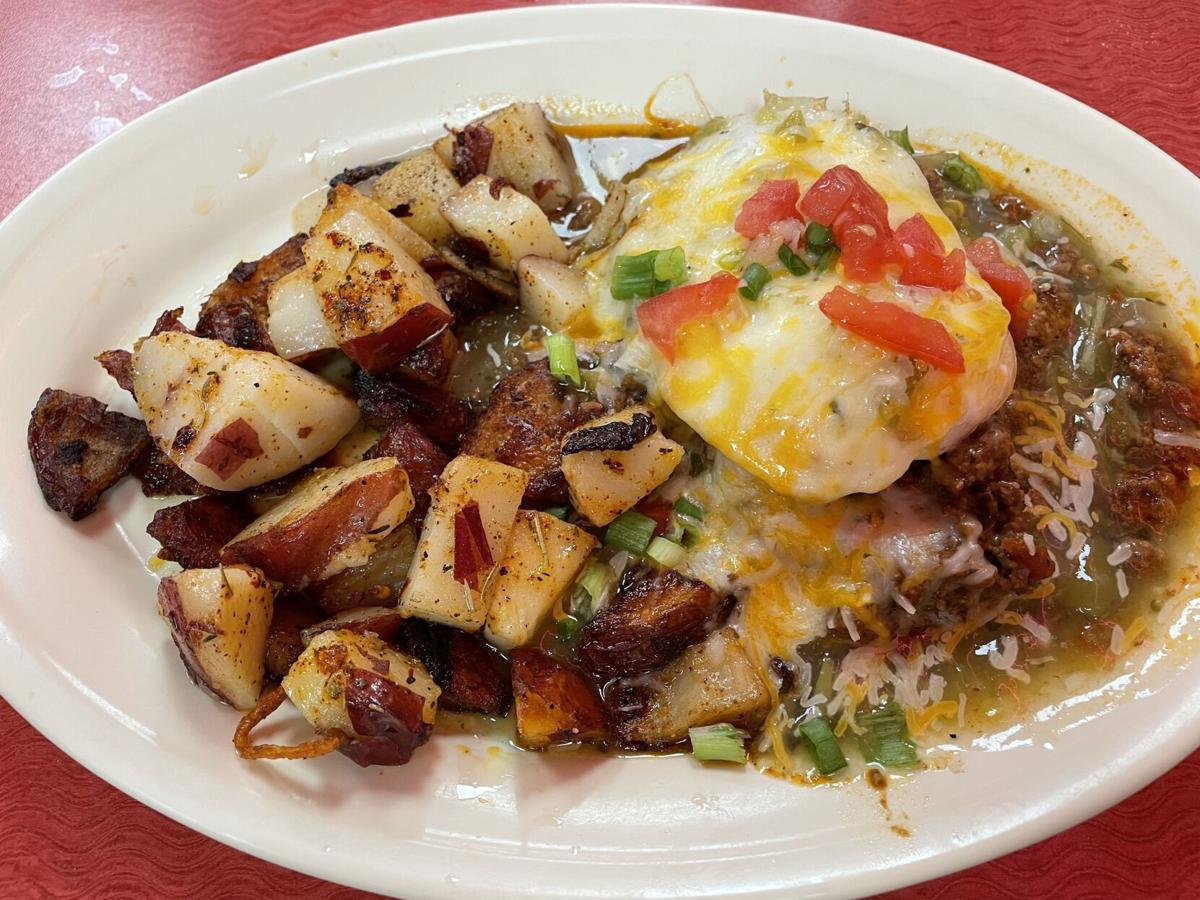 A half-order of the tamale breakfast at The Diner in Norman is large enough for a hearty breakfast.

Melissa Wilson serves her customers with enthusiasm and a smile at The Diner in Norman.

Bonnie Amspacher is the fourth generation to make and serve the secret family chili recipe at The Diner in Norman.

The Diner’s small interior is space-efficient, so get here early or get in line.

The Diner’s chili is rich with freshly-ground Black Angus beef.

A half-order of the tamale breakfast at The Diner in Norman is large enough for a hearty breakfast.

As a travel writer, I’m always on the lookout for new sites and new tastes.

Jack and I had an appointment in Norman at 11 o’clock. Looking ahead, I began thinking about lunch and remembered a small article in the latest AAA magazine that highlighted The Diner in Norman.

The article mentioned their chili. It was a bit chilly out and that sounded like it would hit the spot.

The exterior leaves one with no expectation of the treats inside. It looks old — it is. It looks like the kind of place you’d find on any small town Main Street — and pass by.

A sign on the front of the diner proclaims “Air Conditioned.” Shades of when I was a kid and the movie theaters all had corrugated, cardboard banners picturing icicles hanging from their marquees and promising, “It’s cool inside.”

The truth, which has nothing to do with air conditioning, is that The Diner, appearance notwithstanding, is cool.

The restaurant is tiny — a narrow center aisle with a counter and 10 stools on one side and 10 booths on the other. Action central is the grill behind the counter. Wall space beyond the grill is taken up with racks of condiments and bags of chips.

Glowing pink neon tubing runs around the top of the walls and a neon-script “Grill” over the cooking surface leaves no doubt about its importance.

The one-for-all bathroom is lined with faux pink tile reminiscent of my grandma’s house. This is obviously a place where the appetite surpasses the ambiance. I loved it.

The Diner is the latest in a century-plus legacy of eateries in this building. The first was a chili parlor opened in the 1890s. According to owner Bonnie Amspacher, there has always been a restaurant in this spot.

The Amspacher family has quite a history in Norman, originally owning a small grocery store and deli on the south side of town. Since the 1930s, the family chili recipe has been attracting customers to their businesses.

In 1989, Bonnie’s dad, Mark Amspacher, opened The Diner on Main Street. A 46-pound, 11-ounce striped bass he caught in 1999 at Pickwick Lake still hangs on the wall, along with a picture of him holding the whopper.

Other decorations include old photos — one of the diner taken in the early 1900s, another in the 40s. I almost missed my favorite pieces, but spotted them as we headed out the door — glass bacon, a fried egg and pancakes, a decorative hint of the real things.

We weren’t at The Diner for the décor. We were there for the food. and we weren’t the first — the café was featured on Guy Fieri’s “Diners, Drive-ins and Dives” in 2009.

“You wouldn’t believe how much preparation was required,” Bonnie Amspacher said. “We had to make a list of every ingredient in our kitchen and supply recipes.”

Fieri chowed down on The Diner’s beef and bean burrito, which features Diner chili, pinto beans, onions, tomatoes, cheese and ranchero sauce. I was all ready to order that, but right above it on the menu was championship chili, and that still sounded good.

I’d settled on the chili when our server, Melissa Wilson, mentioned the tamale breakfast on the other side of the menu. “It’s unusual,” she said. “Most places don’t serve tamales.”

A blah breakfast is like a beige carpet — it does the basic job, but there’s no pizzazz. I like to kick-start my day with a breakfast with attitude. It was noon, but this sounded like heaven, and I had to try the chili.

My half-order was more than ample, with enough to take home for dinner. Bonnie Amspacher passed my critical, over-medium egg test — perfectly cooked, with no brown, frizzled edges.

The only difference between the chili on my pork tamales and the championship chili was the beans. Championship chili is dense with all meat — no beans, though you can request them — and seasoned with a secret blend of spices. That’s what Jack ordered. Again, the serving was so large, we took half home.

As for the beef, The Diner uses Black Angus Beef, never frozen, and their hamburgers are hand-patted. The beans are not canned, and are home-cooked. and the ranchero sauce is made from tomatillos, which gives it a nice tang.

As for the service, Melissa was kept hopping, but always had time for a big smile and a chat with customers.

“There’s a real sense of community here,” Bonnie Amspacher said. “We have lots of customers from the courthouse and even from other restaurants.”

Many of the customers are regulars, but casual visitors like us receive the same warm welcome.

The Diner is open for breakfast and lunch. Specials include Tex-Mex touches, but there are burgers and several other sandwiches offered. Vegetarians will find slim pickings — but for the rest of us, this is a great spot.

The history, the chili, the friendly service are all appealing to me. But Melissa gave the definitive reason The Diner is so good: “When you cook with love, it makes all the difference.” and we loved it right back.