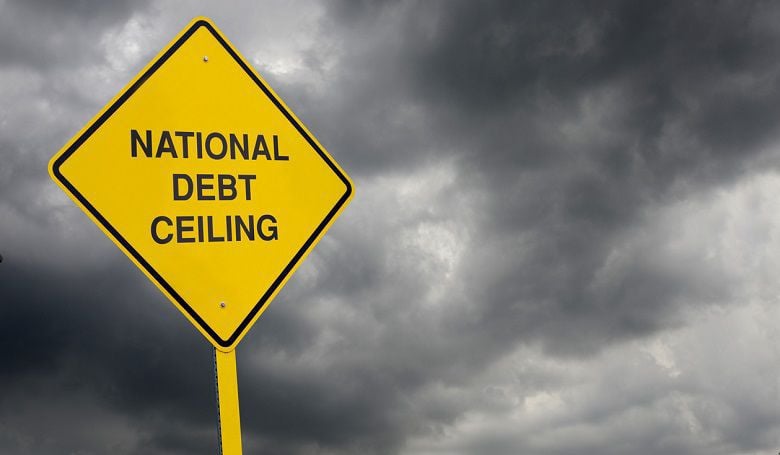 A Caution Sign in front of storm clouds warning of the looming "National Debt Ceiling". 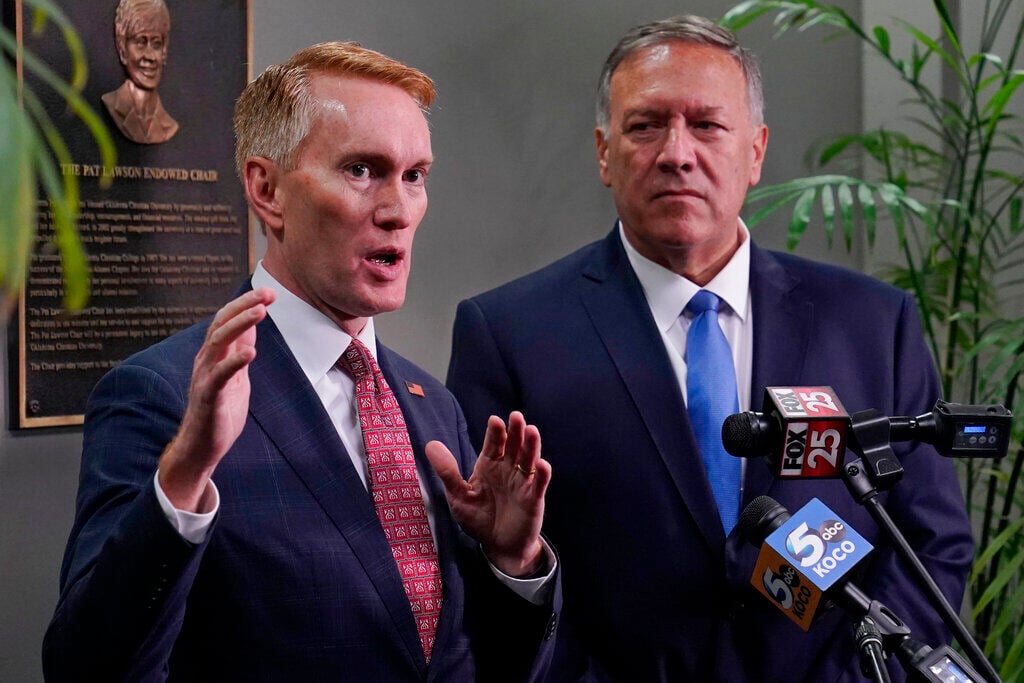 Former Secretary of State Mike Pompeo, right, listens as Sen. James Lankford, left, R-Okla., answers a question for the media before a forum Aug. 18 in Edmond. 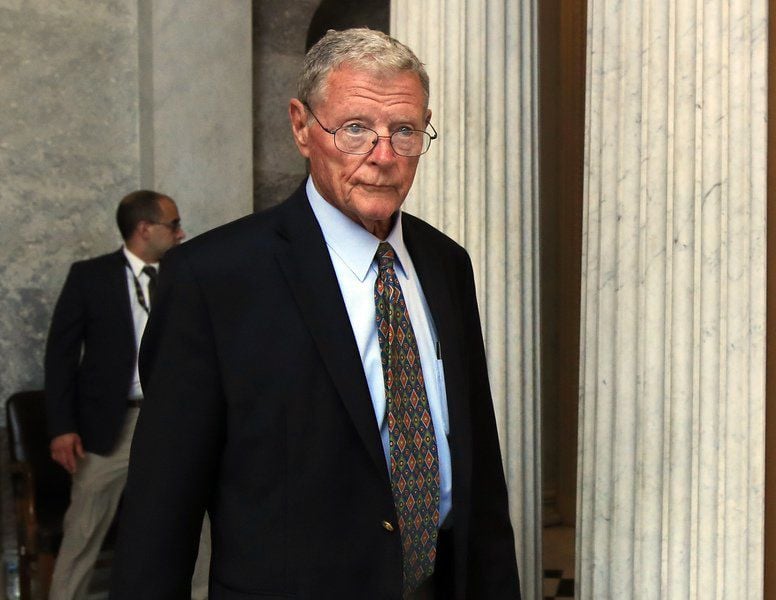 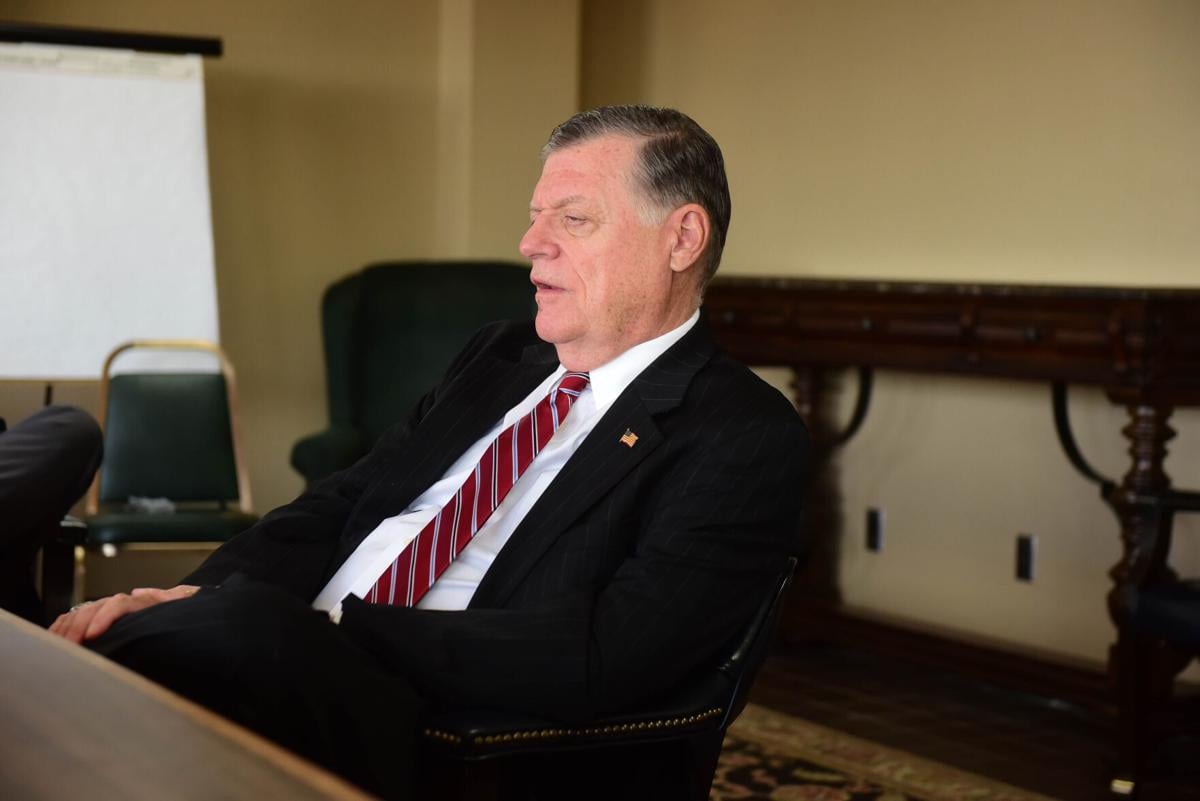 Rep. Tom Cole, R-Norman, reflects on the year in Congress during an interview. He continues to advocate for tribal sovereignty.

The country defaulting on its debt is a crisis that many experts believe will be catastrophic not only to the country as a whole but to cities across Oklahoma as well.

The United States is expected to hit the debt ceiling Oct. 18; the Senate will vote Wednesday on whether to raise it.

Raising the debt ceiling doesn’t allow the government to spend more money; instead, it lets the government borrow money to pay for things that the government has already agreed to spend. Failing to raise it could pose grave problems for the economy, said Michael Crespin, director and curator of the University of Oklahoma’s Carl Albert Center.

“If we don’t raise that debt ceiling, the Treasury can no longer borrow money and fulfill its financial obligations,” Crespin said. “Some of those obligations are things like interest on bonds that people buy. People buy these bonds expecting that the government will make good on the interest. That’s traditionally been an incredibly safe investment, the interest rates are usually pretty low.”

Oklahoma Sens. Jim Inhofe and James Lankford plan to vote against raising the debt ceiling due to what they say is reckless spending on behalf of the Democrats. All of the state’s U.S. Representatives voted against the proposal on Sept. 29.

Experts compare the debt ceiling to when an individual borrows money from the bank. Borrowed money eventually has to be paid back, but if someone defaults on that payment, their trustworthiness suffers, hurting their chances of getting future loans, experts say.

“If you had taken out a loan last year and borrowed $100, and then you have to pay it back today for say, $102, because maybe there’s a 2% interest, you’re saying that the way you would pay that back is by issuing a new debt for $102,” said Greg Burge, chair of the department of economics at the University of Oklahoma. “So somebody else is buying that new bond from you for $102, and you simply sort of take the payment for that and you give the other person their money. But what we’re running up against now is a scenario where we will sort of hit our limits in terms of the amount of debt that we’re allowed to issue.”

The entire country indirectly benefits from the security of the economy, Burge said — defaulting on the debt could have a ripple effect, causing Oklahomans to feel the failures of those in Washington D.C.

According to Treasury Secretary Janet Yellen, if the country did default on its debt, adults on Social Security could see their payments delayed, military members would not know when their paychecks were coming, interest rates on credit cards, car loans and mortgages would rise and payments would become significantly more costly.

Burge said he predicts the shock of defaulting on the debt will be minimal in Norman and across Oklahoma. Still, Yellen said a default on the country’s debt could lead to a recession.

Though Burge said he does not believe a recession is likely come Oct. 18, if it were to happen, everyday people’s lives would be continually challenged.

“During a recession, over time, you would start to see real impacts on people’s lives,” he said. “It might be harder to get a job, or it might be harder for your business to thrive, or it might be more difficult to achieve whatever those objectives you have in your personal life are … I could see those sorts of things playing out, and I mean, you can easily tell the story that we are all kind of better off if we operate in an economy that is thriving and where we are not experiencing an economic contraction.”

According to the Treasury Department, the country defaulting on its debt would lead to an automatic downgrade of the U.S. credit rating. This would drive up interest rates for all Americans.

That would make small business loans cost more money, since private lenders would be forced to increase their interest rates. Even loans guaranteed by the Small Business Association would become more costly, drastically affecting small businesses, according to the department.

Defaulting on debt would sever this much-needed lifeline for small businesses that are already struggling to hang on coming out of the COVID-19 pandemic, said Scott Martin, CEO and president of the Norman Chamber of Commerce.

“Access to capital is critical for economic growth and expansion,” Martin said. “Small businesses rely on lending institutions for their lifeline, and so it’s really important that capital is easily accessed and also affordable.”

If the rates are too high, that’s not good for the entrepreneur trying to start a business, and makes people’s dreams of owning a business “that much more unattainable for,” Martin said.

Forbes predicts that a debt default will also lead to higher credit card interest rates, tightened credit markets, plunging stock markets and delayed treasury payments, all of which would be catastrophic to small businesses, Martin said.

“A lot of businesses have been living on the edge for the last 18 months,” he said. “They’re hanging on by their fingertips doing the best they can to survive, keep the doors open and pay their employees. Certainly some of the relief efforts have helped. But the country defaulting on its debt could be the death knell to many small businesses that are still just hanging on. So the government needs to figure out a way to rectify this.”

Martin, like much of Oklahoma’s congressional delegation, believes the national debt is a problem that has been ignored for too long and must be fixed.

Each of the state’s U.S. Representatives voted against raising the debt ceiling because the bill did not have any provisions to help reform government spending.

Rep. Tom Cole, R-Moore, has habitually said he is against passing a “clean debt limit” bill. In 2017, he told MSNBC’s Morning Joe that “a clean debt ceiling hike is like having a credit card and saying ‘I’ve reached my limit, I’m just going to change the limit higher without changing any of my spending habits.’”

Cole also said in 2017 that in order to vote to raise the debt ceiling, the bill must also include policies that would rein in and reform government spending and debt. Cole’s current stance matches his 2017 statements.

“While it is correct that Democrats and Republicans have come together in the past to address the debt ceiling, the circumstances were drastically different,” Cole said in his Weekly Column. “Moreover, such efforts were often paired with provisions seeking to reduce the deficit and slow the growth of the national debt, which is not the case with both measures brought to the floor in the last couple weeks.”

Congressman Frank Lucas, R-Cheyanne, said that in order for him to support an increase to the debt limit the Democrats must abandon their plan for a $3.5 trillion reconciliation package.

“For the sake of the full faith and credit of our nation, Congressional Democrats should end their political posturing and either begin the budget process to raise the debt ceiling or drop their reckless tax and spending plan,” Lucas said in a statement. “But in the meantime, Democrats will not get bipartisan support to borrow money to spend historic sums on their partisan reconciliation package.”