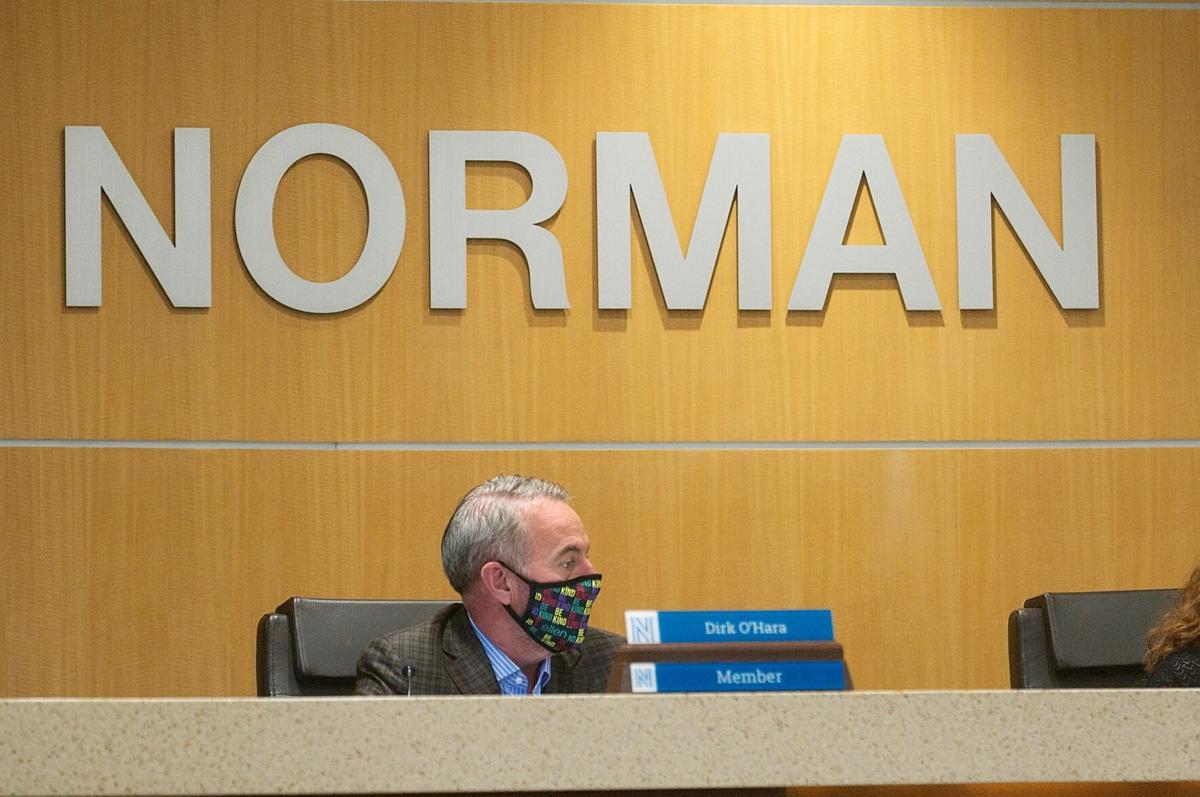 Norman Public Schools Board of Education member Dirk O’Hara listens to discussion at a meeting Monday. The board approved a new principal at Norman High School and discussed future masking policies. 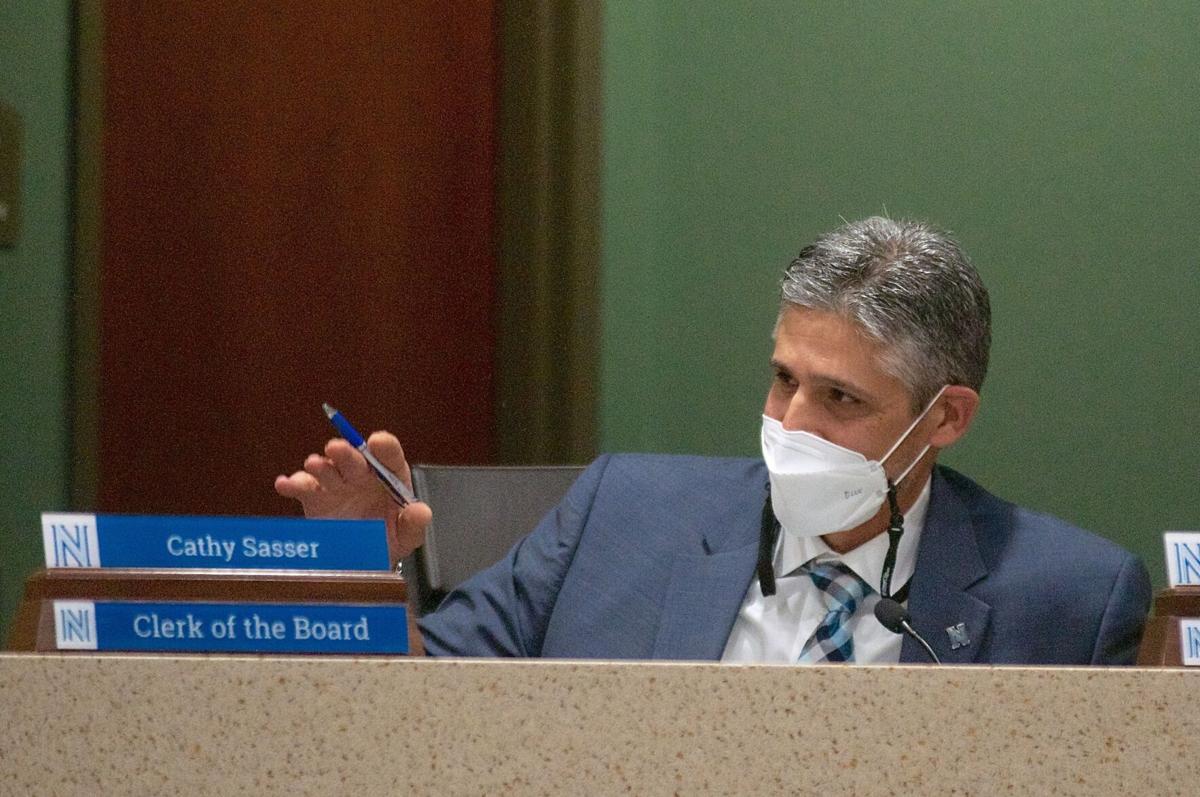 Norman Public Schools Superintendent Nick Migliorino speaks during a meeting recently. The board will decide during a meeting Monday whether to make wearing masks optional across the district effective this week.

Norman Public Schools Board of Education member Dirk O’Hara listens to discussion at a meeting Monday. The board approved a new principal at Norman High School and discussed future masking policies.

Norman Public Schools Superintendent Nick Migliorino speaks during a meeting recently. The board will decide during a meeting Monday whether to make wearing masks optional across the district effective this week.

Hallie Wright, currently an assistant principal at Putnam City West High School, started her career with NPS 27 years ago and will return to lead Norman High, the district said Monday.

Wright replaces David Jackson, the school’s principal of two years who is retiring and moving closer to family, a district spokesperson said Monday.

Wright, who still lives in Norman and whose daughter is an NPS alumna, has 18 years of school administration experience, the district said in a news release. The board unanimously approved her appointment Monday, along with several athletic leadership hires.

“Norman High School has a reputation for excellence, and we couldn’t be more excited to welcome Hallie back to Norman to continue that legacy,” NPS Superintendent Nick Migliorino said in a news release. “She has a wealth of experience and knowledge as a public school administrator, and I can’t wait to see the things that will happen for our students and families under her leadership.”

While the district filled one high school principal spot Monday, it opened the other.

Kristi Gray — Norman North High School’s principal of two years who was hired to the position at the same time as Jackson — will move into the district’s director of gifted education, advanced placement and college and career readiness position.

Gray’s departure from North leaves the district conducting a search process for her replacement.

In a short but pointed public communications section, three parents explicitly asked the district to make in-school masking optional in the fall, citing research and examples that do not appear to be backed by leading public health authorities.

The issue of masking — and the decision whether to reopen schools at any capacity at all — has sparked contentious conversation in the district community over the last year.

In late July, August and September, parents and teachers flooded board meetings to advocate for one side or the other in the back-to-school discussion.

While parents Monday questioned the efficacy and necessity of masks — some noting that masks seem to have had an adverse effect on children’s mental and physical health — the Centers for Disease Control and Prevention reports that masking causes no observable breathing issues even for older adults, hospital workers, toddler-aged children and those with COPD.

“Mask use has been found to be safe and is not associated with clinically significant impacts on respiration or gas exchange,” the CDC notes. “Adopting universal masking policies can help avert future lockdowns, especially if combined with other non-pharmaceutical interventions such as social distancing, hand hygiene and adequate ventilation.”

Monday’s commenters asked for clarity on the issue soon, with one mother telling the board her children would not be returning to NPS for the second year in a row should the district mandate masks.

While only three parents asked about optional masking during the meeting, each of the five board members took a chance to address their own feelings about masking, many of them concluding that they hope for a mask-optional fall semester if safe.

“If I were here to vote, I would want it to be optional, and the good thing is we have the time to get the information and to gather it, because it’s not just what I want. We’ve got to take care of the kids and the teachers and the staff,” board member Cindy Nashert said.

Several noted that the district has time before school begins that should be used to find the best and most updated information.

Board member Linda Sexton and board President Dan Snell said they are looking forward to seeing how widespread vaccinations become and what kind of impact vaccines have on COVID-19 variants.

“It has come to my attention quite clearly that you can find a researcher to support whatever it is you want to see supported,” Sexton said. “... I tend to trust the government researchers, because they have nothing to gain; they’re just researching and reporting what they find.”

The board will make its decision about summer masking at least at a May 24 special meeting, the superintendent said.

The board also heard an update from Chief Operating Officer Justin Milner on district bond construction projects and recent obstacles.

While the board approved subcontractors for projects at three schools, Milner also shared that a recent hailstorm and rising construction costs have been challenging.

“We have roof, HVAC, skylights and/or window damage in about 10 of our school sites,” Milner said of the April 28 hailstorm. “Some of that is obviously frustrating, as we had just finished roofing some of those schools for the bond project. Even with a significant improvement on that and a 3-inch hail warranty on the roofs, we still saw large enough hail to do the damage.”

Milner said he’s seen a 5% cost increase average nationally in construction, with a 15% to 20% increase locally. Lumber costs are up significantly, while the district is down a steel producer and seeing struggles with the brick supply chain.

NPS is far from alone in considering high construction costs.

As The Transcript previously reported, the City of Norman has the issue on its radar as it works on bond and quality-of-life projects.

“I say all that not as excuses [but] just to give some context,” Milner said. “Some of those projects, if you’ve seen some delays along the way, there have been quite a number of challenges.”

Emma Keith is the editor of The Transcript, where she covers Norman Public Schools and the University of Oklahoma. Reach her at ekeith@normantranscript.com or at @emma_ckeith.