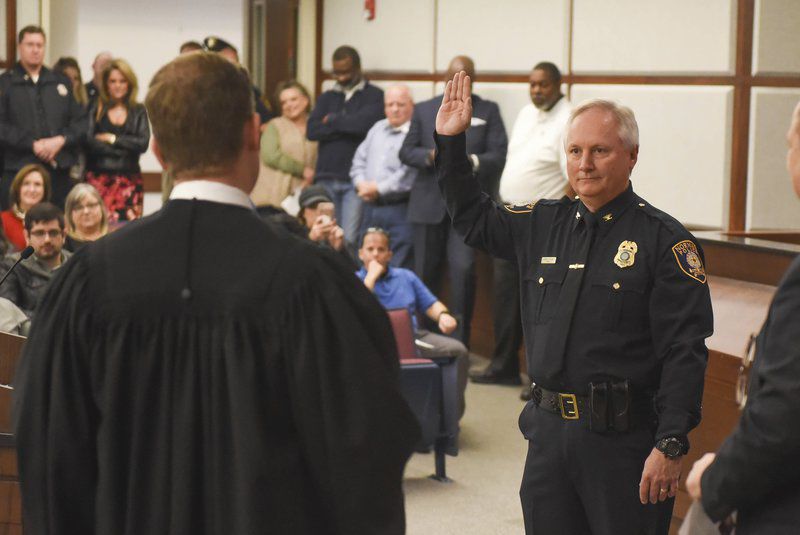 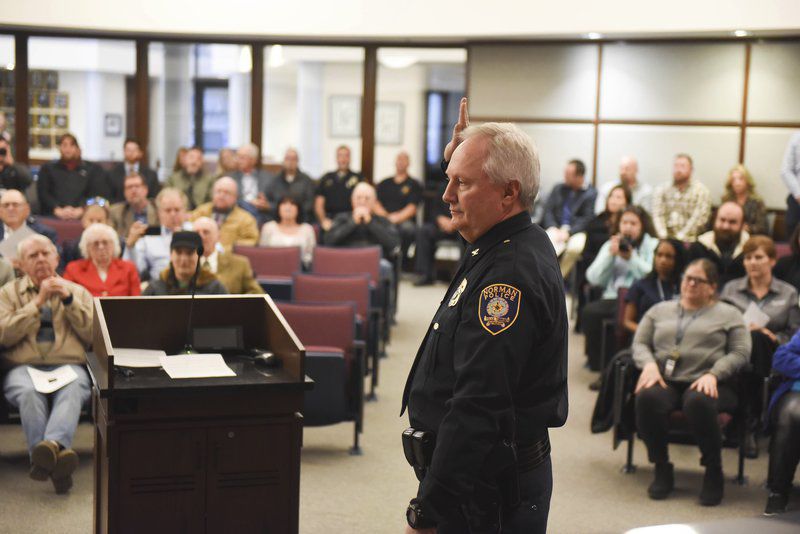 New Norman Police Chief Kevin Foster is sworn in during a ceremony Friday at city hall.

New Norman Police Chief Kevin Foster is sworn in during a ceremony Friday at city hall.

The Norman Police Department has officially entered another chapter in its history with the swearing in of Chief Kevin Foster, who began his term Friday following a ceremony at city hall.

Foster has served as interim chief since March 6, after former chief Keith Humphrey took a job as chief of police in Little Rock, Arkansas.

"I'm excited. I'm looking forward to working with everybody. It's such an honor to be selected to continue as chief for such a great city," Foster said.

Foster said he plans on continuing what the department has been doing and reaching out to the community. He encouraged residents who have any issues with NPD to report them so the department can work on fixing them.

"He will get things done that people have been struggling with," Chance Foster, 14, a Norman North High School freshman, said about his father. "It's a good opportunity and he will do it well."

Kelly Foster said she is excited for her husband.

"After 30 years with the department, we're excited that NPD has kept the ranks well educated and up with trends of law enforcement so when opportunities like this arrive, there are viable and strong candidates, and they didn't have to look outside for the right fit," she said.

Throughout his three decades of service, Kelly Foster said she has never worried or been concerned about what the job might bring for her husband because of his even temperament.

"He works well with others," she said. "He can slide in with ease."

Kevin Foster he was talking to a department head when the press release announcing his selection arrived. His phone was ringing off the hook and there was a line of people at his door. He also received emails from across the globe.

"It was such a response both internally and externally. I am honored and humbled by the response," he said.

Humphrey, who traveled from Little Rock for the ceremony, said Foster is truly qualified for the job.

"It's exactly the way I saw it happening. The department won't miss a beat," he said.

During the conference, City Manager Darrell Pyle outlined how hard the interview process was. The city cast a wide net for the position and received many applications nationwide.

Once Pyle selected and spent time with the final six candidates -- which included Norman Maj. David Teuscher, two other candidates from Oklahoma and two out of state -- he said he confident handing the keys to the city to any of them and being able to sleep comfortably.

From there, Pyle said he began searching for the candidate with the greatest investment in the community, and Foster had the most.

"He will expand on the great work done by his predecessors," he said.

Foster started with NPD in September 1989. He served in patrol, as a detective, worked in uniform support services and professional standards and other numerous positions. He was promoted to major in November 2011. He has been in charge of every department at some point over his career.

"Not only is [Foster's hiring] a symbol of moving forward, it also means we're almost done with a big time of transition in the city," Mayor Breea Clark said, referring to recent hires for new city attorney and planning and community development director.

"We place a very high value on community-oriented policing. There were a lot of great candidates. I'm looking forward to working with you," said Clark, who gave Foster a high five.

Foster said he believes policing is one of the noblest profession to undertake. During his speech at the ceremony he thanked former chiefs Phil Cotten and Humphrey for their influence on him, and especially thanked Humphrey for driving from Arkansas to celebrate with him.

"I will promote an open, accountable and accessible department. We are committed to making to the community safe and secure," Foster said. "We have some of the best officer, supervisors and civilian employees. Without them, we wouldn't be the department we are."

He also thanked his wife and family for their support throughout his career.

Cleveland County Sheriff Todd Gibson said his office has always had a great relationship with the city, and he has worked closely with Foster for many years.

"Foster's selection only enhances that relationship and out ability to better serve the residents of Norman and the county," he said.