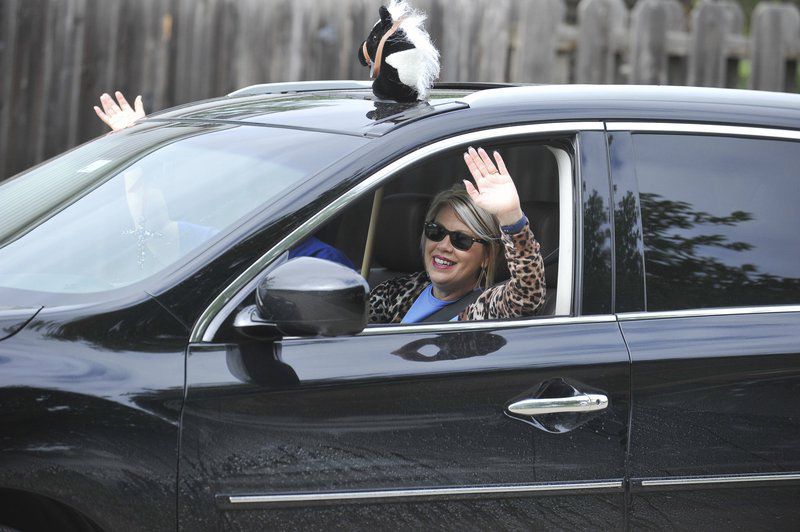 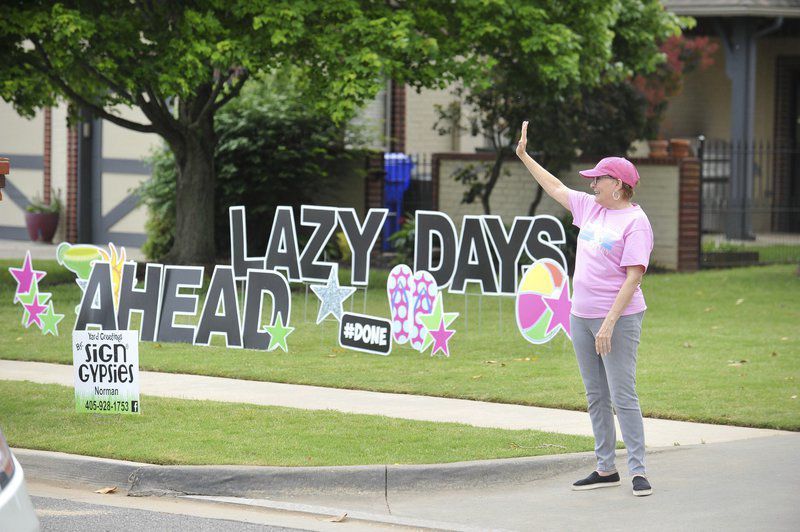 Washington Elementary Principal LInda Parsons waves as teachers drive by to wish her a happy retirement Thursday during a car parade.

Washington Elementary Principal LInda Parsons waves as teachers drive by to wish her a happy retirement Thursday during a car parade.

As the 2019-2020 school year comes to a close, Norman Public Schools will lose two of its principals, one of whom has led her school for more than 15 years.

Parsons will be leaving Washington after 17 years at the school. After spending so much time investing in teachers and students, retirement will be "a major life event" for Parsons, but one she said she doesn't plan to let disconnect her from Washington.

Even after retirement, the principal still hopes to volunteer and interact with a school community that has now become her family, she said.

"Linda's contributions to Washington Elementary are immeasurable," NPS superintendent Nick Migliorino said in a statement. "We will certainly miss the joy she brought to her position and appreciate the endless investments she made in students she served. Her passion for serving others has been abundantly clear and she has been a beloved principal for the Washington school family. We wish her the best as she enters the next chapter of her life with a well-deserved retirement."

Parsons said while she decided a year ago that this would be her final year with NPS, she could have never imagined what the last few months of her time at Washington would look like. Though the end of her last school year hasn't been traditional for Parsons, the Washington principal did get a surprise when the school's teachers drove by her house last week to celebrate her with a car parade.

"I just felt so honored," Parsons said. "Even though I couldn't give people hugs and really tell them up close how much I loved them, I definitely felt that love and appreciation coming from them to me, and me back to them."

Parsons said some of her greatest joys as a principal have come through seeing students grow up and interacting with them and their families in the community after their time at Washington has ended.

"That always brings me a lot of happiness and feeling like we're doing the right things, because we as a staff believe that we have an opportunity for great impact with our young children, so for them to go on and remember us is remarkable," Parsons said.

Halfway across Norman, Monroe Elementary will also lose a leader this year as Stone leaves after two years as principal. Stone is returning to Purcell, the city where her career in education began, to serve as principal at Purcell Elementary.

Stone said that the opportunity in Purcell came up fairly recently and quickly, but the move will allow her to be closer to family and return to an education system she already knows. Though she hasn't taught in Purcell schools in several years, Stone has stayed connected with the community, and said she has taught Sunday school in Purcell for the last 15 years.

"I will have children that I have in my Sunday school class in my building," Stone said. "I know many of the staff there, because I taught there for 13 years...it's been a while since I've been back in the school community in Purcell, and the community that we have in Norman, although it's large, it's so full of love."

In her two years in Norman, Stone said the school system has provided a welcoming, loving community, and relationships "what will really stay in my heart."

"I was welcomed right from the start -- the PTA, the families and the teachers were so welcoming," Stone said. "I've never worked at a school that's like Monroe -- it's just a wonderful community school to work in. I'm going to miss it."

Stone said while she's excited for her new opportunity, she'll also deeply miss her Norman community, where she's seen care for students and found support. The Monroe principal, along with teachers, got to say goodbye to her students with an emotional last day of school car parade last week.

Migliorino said in Stone's time in Norman, she has served as "a tremendous leader" to her school community.

"Her dedication to serving students and families and her passion for leading an amazing team of educators has been evident during her time in our district," the superintendent said in a statement. "We are certainly sad to see her go, but wish her the very best as she moves to be closer to her family."

Despite the unexpected end to their time at their schools, Stone and Parsons said they've been proud of their communities at Monroe and Washington through the challenges of distance learning.

"It's sad that the year had to end this way, but I think that we have made the most of being creative and helping our students to continue learning," Stone said.

While instruction in Norman Public Schools has ended, the school year isn't quite over for Parsons and Stone. Since their contracts run through June, both principals still have a few more weeks to wrap things up at their schools.

When the year does end and Parsons' retirement becomes official, the principal said some of her plans may have to stay on hold for a while. Parsons' husband is retired already, and while the two had planned to travel, they're willing to wait.

"I had several big life events happening in May -- my 50th wedding anniversary, my retirement -- so I have felt completely calm and okay about saying 'this is not the right time, but there will be the right time,'" Parsons said. "We will celebrate later."