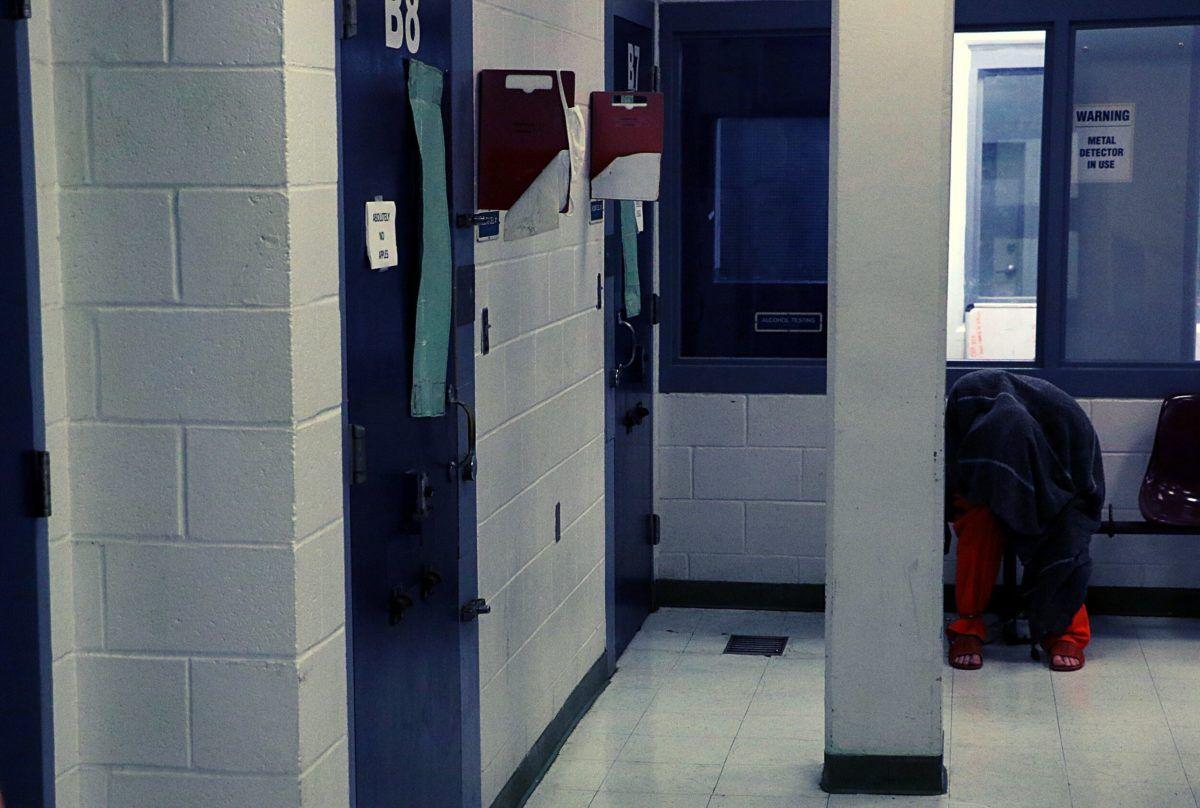 A prisoner sits in the mental health intake area at the Rogers County jail. On any given day, four or five people stay in the room for observation. 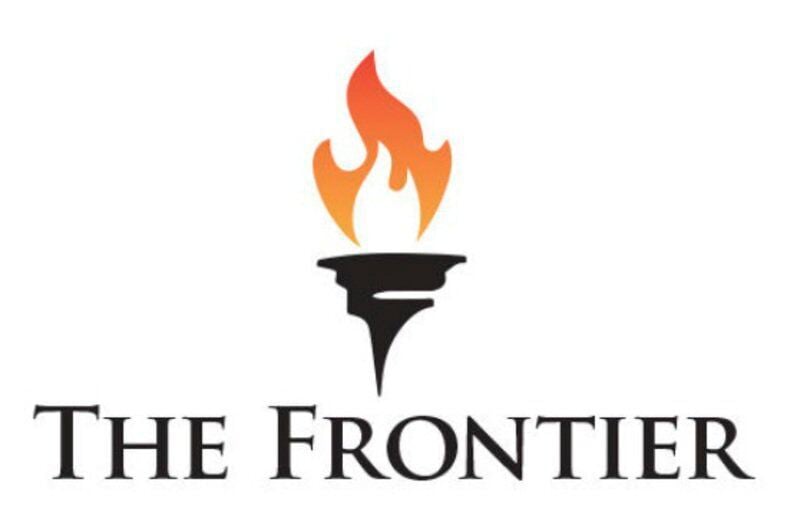 On any given day, four or five people sit in the mental health intake room at the Rogers County jail for observation. The small space is clean and painted different shades of blue, filled with a few chairs, a cot and a central station for a detention officer to work at. Prisoners can meet with a mental health professional in an office off to the side of the room.

Many of the incarcerated people at the 250-person jail have substance abuse issues, said jail administrator Zach Starkey. The facility has a constant flow of people on suicide watch or special observation for mental health issues.

The jail, which works with Grand Lake Mental Health, the largest mental health provider in northeast Oklahoma, has plans for building renovations and an expansion of its intake space, a $3 million project that will be funded with COVID-19 relief dollars.

But the demand for mental health care is still greater than the jail has the resources to fully serve.

“We do what we can to treat people. But we can only do so much with the options that we’re given,” Starkey said. Paying for more on-site mental health professionals or community treatment options isn’t something the county can afford on its own, he said.

Oklahoma voters meant to address that funding gap by approving a landmark package of criminal justice reforms in 2016 that included creating a new fund to help finance county mental health programs. But five years later, the Legislature has not sent any money to the fund and the state has yet to draft official rules for how the money can be spent.

Advocates say the lack of funding has left a gap for counties to fill to address mental health care shortages in their areas, leaving law enforcement as the primary intervention for people struggling with mental health or substance abuse issues.

Prisoners wrestling with mental health and addiction can die in county jails that are ill-equipped to handle the needs of people in crisis. More than 1,000 people died in local jails across the United States between 2017 and 2018, according to the U.S. Bureau of Justice Statistics. Suicide was the leading cause of death in jails and deaths from alcohol or drug intoxication more than quadrupled between 2000 and 2018.

Criminal justice reform advocates pushed for two measures on the 2016 ballot in hopes of reducing Oklahoma’s high incarceration rate. State Question 780 reduced some drug possession and property crimes from felonies to misdemeanors. The money the state saved from sending fewer people to prison was supposed to go into a new fund created by State Question 781 and distributed to counties across Oklahoma based on population.

McNair said state lawmakers told him early on that they would never send any money to the State Question 781 fund, so the sheriffs’ association stopped considering it.

“The sad part is, is the people that that money was meant to help continue to come to the county jail,” McNair said.

Rogers County Sheriff Scott Walton opposed State Question 780. After the ballot measure passed, Walton has jailed or written tickets to more people repeatedly on misdemeanor charges who previously would have gone on to state prisons after a felony conviction. The county still does not have the promised state funding to connect those people to effective programs, he said.

Oklahoma’s prison population has declined by nearly 20 percent since State Question 780 took effect in July 2017. A package of additional criminal justice reforms approved by the Legislature in 2018, as well as delays in court proceedings and transfers from county jails caused by the coronavirus pandemic have also contributed to the decline.

But despite Oklahoma’s shrinking prison population, state lawmakers have decided against giving money to the 781 fund and instead have given additional funding to the state Department of Mental Health and Substance Abuse Services for various mental health initiatives.

House Speaker Charles McCall, R-Atoka, said legislative leaders made the decision because of concerns that counties would not be able to provide appropriate services, as well as flaws in the funding formula to determine how much money should be going into the 781 fund.

“There have been widely-disputed savings projections alongside legitimate concerns about whether counties can even provide these services, let alone provide them as well as state-level mental health experts,” McCall said. “The length of time it has taken is related to getting what the voters want done right.”

Many counties are still struggling to provide adequate community-based mental health and substance abuse services to their areas, said Gene Wallace, director of the Association of County Commissioners of Oklahoma.

Running county jails typically takes more than half of all tax revenue available to county governments, Wallace added. Without additional dollars, many counties — particularly in rural areas — don’t have the financial capability to provide new services.

“Some of our communities have community-based mental health provisions, but unfortunately many of them don’t,” Wallace said. “If an individual is brought to a county jail, and maybe they need mental health more than they need incarceration, that’s just not available.”

Lawmakers say they followed ‘spirit’ of SQ 781, but not funded itOklahoma is sending fewer people to prison, but lawmakers and advocates haven’t been able to agree on how much money has actually been saved directly because of State Question 780. Various state savings estimates have ranged from about $63 million in 2018 to $10.6 million in early 2021.

DOC spokesperson Justin Wolf said the calculation process has been complicated and the $10.6 million was the “best estimation” the department could make, though the agency didn’t necessarily see a decrease in total costs.

Still, lawmakers did not include any dedicated funds to fulfill State Question 781 in this year’s budget.

It’s uncertain what programs would even be eligible for 781 funds since no detailed rules were ever drafted by the state’s Office of Management and Enterprise Services.

This year, lawmakers say they are still following the “spirit of 781” by providing $12.5 million in dedicated funding to the state mental health department, said Sen. Roger Thompson, chair of the Senate Appropriations Committee. The additional funding will be used to expand a program that gives tablets to police officers to carry while on duty so therapists can be contacted remotely for anyone having a mental health crisis. A new mobile crisis response program intended to connect adults in crisis with mental health services instead of police will also get some of the money.

“It was my intent this year to make sure that we took some money and put it toward addressing the issues brought up in 781,” said Thompson, R-Okemah. “And I feel like we’ve done that through the $12.5 million. And I would hope that (the public) would see the Legislature is taking action, and we’re taking the will of the people very seriously. And we’re trying to do the best we can.”

Ryan Gentzler, a senior policy analyst with the Oklahoma Policy Institute, said the funding for the state mental health department is “better than nothing,” but it does not follow the language that voters approved in State Question 781, which called for the money to go to local communities.

“I think the idea behind 781 was to put local actors in control of those changes because they’re the best equipped to understand what the needs are in those communities,” he said in an interview with The Frontier.

Oklahoma was flush with cash this past budget year, with more than $9 billion to spend as the economy rebounded from the early portion of the pandemic. After increasing funding to nearly every state agency, lawmakers put more than $800 million in savings and approved tax cuts of more than $100 million for this fiscal year, but still didn’t fund State Question 781.

Oklahoma has historically struggled to provide adequate mental health care because of budget cuts. With state coffers full, lawmakers could have provided both to the mental health department for statewide initiatives and to local communities through the 781 fund, said Kris Steele, director of Oklahomans for Criminal Justice Reform, which led the campaign to pass State Questions 780 and 781.

“I appreciate the Department of Mental Health and Substance Abuse Services,” Steele said. “But at the end of the day, the voters of Oklahoma said, ‘We believe that our communities should have some say in creating treatment options for the people, for our neighbors.’”

The state’s corrections budget has stayed relatively flat over the last few years at more than $500 million per year. Lawmakers point to that and question how the state can save money because of State Question 780 if DOC’s budget continues to be high.

“We’re being told that they’re saving all this money at the same time that they’re asking for more,” said Rep. Kyle Hilbert, vice chair of the House Appropriations Committee. “So that’s one piece of the challenge.”

But McNair and criminal justice reform advocates say the Department of Corrections’ budget requests have included funding repairs for aging facilities and increases to correctional officer pay. The state shouldn’t wait for the DOC budget to decrease to put money into the 781 fund, they said.

“I don’t think anybody really believes that the DOC budget should be going down,” Gentzler said. “But at the same time, we know that (State Question) 780 has diverted people who would have gone to prison away from prison. and we know that those people cost money to house, to clothe, to feed.”

Gentzler was part of the most recent effort to come up with a new savings calculation that lawmakers could use to deposit money into the 781 fund.

In early 2021, the Oklahoma Office of Management and Enterprise Services released an updated report that found the state had saved $10.6 million because of State Question 780 during the previous fiscal year.

Although the state has not created official rules for how to spend 781 money, advocates say it could be used for a wide range of rehabilitation programs, re-entry opportunities and mental health and substance abuse treatment options. The money could also be used to expand the use of drug or mental health courts or to build sobering centers where police can drop off people who are intoxicated instead of taking them to jail.