In this 2015 file photo, Austin Holland, of the Oklahoma Geological Survey, answers a question as officials speak to the media following a meeting in Oklahoma City of members of the Coordinating Council on Seismic Activity. Holland, Oklahoma's former lead seismologist, says he felt pressured by a University of Oklahoma official to not link the state's surge in earthquakes to oil and gas production.

NORMAN — Oklahoma’s former lead seismologist has testified he was pressured by officials at the University of Oklahoma to suppress findings linking earthquakes with fracking wastewater disposal.

In a deposition taken on Oct. 11, Austin Holland alleges he was reprimanded for publishing a peer-reviewed journal article connecting the two and was pressured to alter his findings by Larry Grillot, former dean of OU’s Mewbourne College of Earth and Energy, and Randy Keller, the former director of the Oklahoma Geological Survey.

Holland said his decision to leave OU and the Oklahoma Geologic Survey in 2015 was a direct result of pressure from his employers.

“I don't know if ‘angry’ is the right word, but just disappointed … that I'd spent my time working towards something, and I thought I was in my dream job, and then I couldn't be a scientist and do what scientists do, and that's publish with colleagues,” he said.

“Well, that’s the point at which I realized that for my scientific credibility, I had to leave the position I was in.”

In the deposition, Holland claims that Keller and Grillot influenced or altered wording in his findings or presentations.

Holland said he met with Grillot and provided an advance copy of a report he co-authored linking seismicity with wastewater disposal.

He said Grillot’s response was “this is unacceptable.”

Holland said the dean’s main objection was that the report made policy recommendations, specifically those in the concluding paragraph of the report:

"Even if a network is owned and operated by industry, regulators must ensure that seismic data are not withheld from the public,” the report read. “Similarly, making injection data, such as daily injection rates, wellhead pressures, depth of the injection interval, and properties of the target formation, publicly accessible can be invaluable for attaining a better understanding of fluid-induced earthquakes.

“Open sharing of data can benefit all stakeholders, including industry, by enabling the research needed to develop more effective techniques for reducing the seismic hazard."

Holland said he was never given a written reprimand and believes conversations were conducted over the phone or in person to avoid a searchable record of conversations available through open records requests.

Holland said he wished he would have recorded the conversations, including those that took place during a 2013 meeting at OU President David Boren’s office with Boren and Continental Resources CEO Harold Hamm.

Holland said he was summoned to the meeting after he published a paper discussing hydraulic fracturing triggering earthquakes in Oklahoma.

“Well, the president of the university expressed to me that I had complete academic freedom, but that as part of being an employee of the state survey, I also have a need to listen to the people within the oil and gas industry,” Holland said. “And so Harold Hamm expressed to me that I had to be careful of the way in which I say things, that hydraulic fracturing is critical to the state's economy in Oklahoma, and that me publicly stating that earthquakes can be caused by hydraulic fracturing was — could be misleading, and that he was nervous about the war on fossil fuels at the time.”

Holland called the meeting “intimidating,” but he went on to publish another report on induced seismicity in February 2015. By July of 2015 it was made public that Holland would be leaving the university and the Oklahoma Geological Survey.

Holland said energy companies, industry and environmental groups reached out to him to advocate for their point of view, but he said they weren’t the source of coercion.

“And I did have people in the industry say, ‘Well, you can't say that’ or ‘You can't say this.’ But the ones that actually write the paycheck control what I say in the public eye and what I don’t.”

The deposition was taken as evidence last month in a lawsuit originally filed in 2015 by Jennifer Cooper against New Dominion and Spess Oil Co. for damages related to 2009 quakes in Prague. 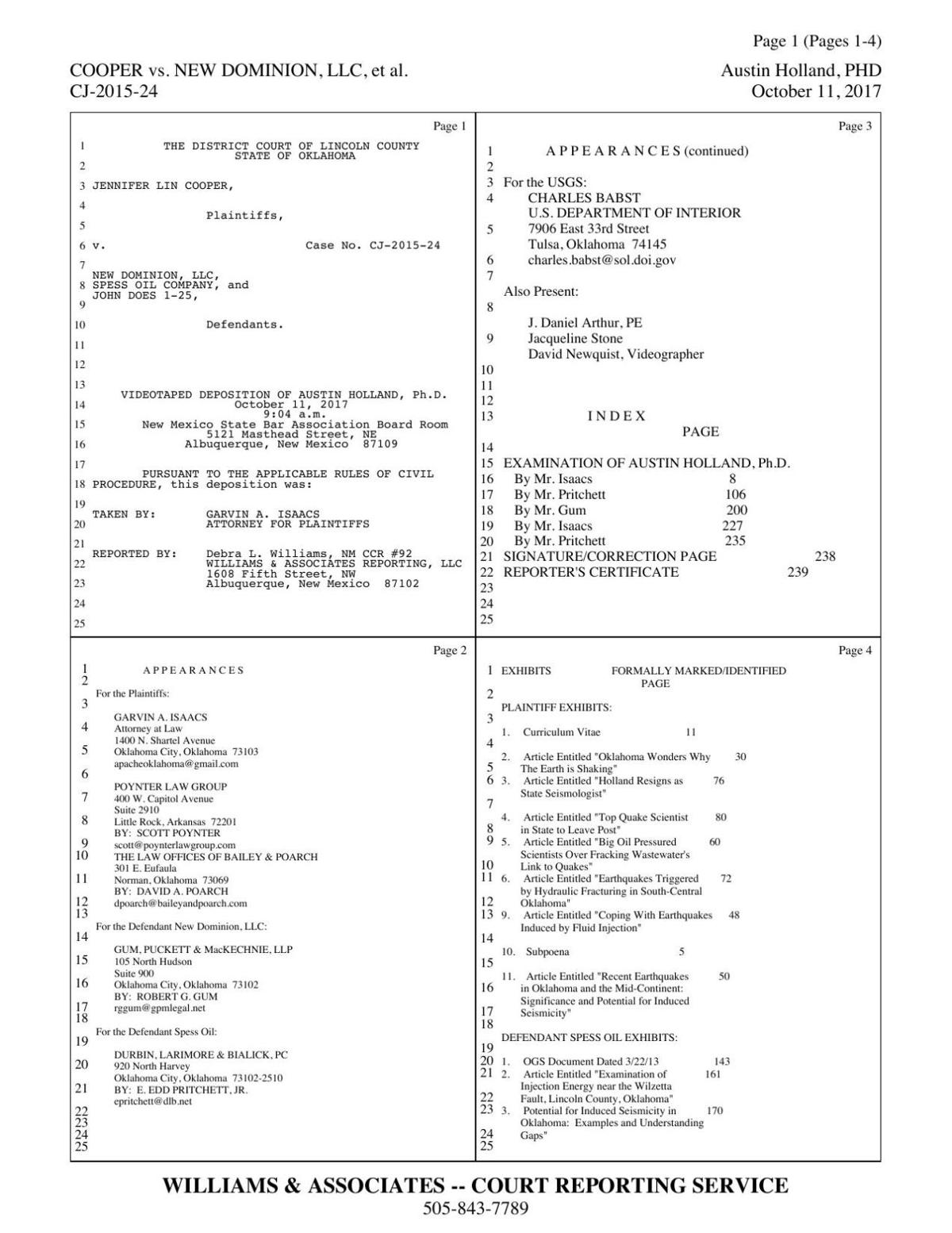 That case and a similar case filed by Gary and Sandra Ladra in 2011 has since been settled, but Holland’s assertions raise questions about the academic integrity of the university and the Oklahoma Geological Survey, which is headquartered at the OU Norman campus.

In 2015, Boren told the Tulsa World that university research has never been compromised by donors like Hamm, who donated $20 million to the university in 2011.

Boren served on the Continental Resources board of directors from 2009 until leaving the position earlier this year. He received hundreds of thousands of dollars and stock compensation for his work with Continental, but OU Vice President for Public Affairs Rowdy Gilbert said Boren’s role with the company did not influence his role as university president.

“Board service by university presidents is commonplace as it provides additional breadth to a president’s experience, which can greatly benefit the institution,” Gilbert said. “In accordance with his employment agreement, President Boren may serve on the board of any corporation, trust or other legal entity, provided that such service will not detract from his service as president of the university.

Gilbert said the meeting between Hamm, Boren and Holland was called as an opportunity for dialogue

“At the time of the meeting, there was great public interest and discussion on the role of oil and gas operations on seismicity,” Gilbert said. “The university was completing groundbreaking research on the topic. The meeting was a great opportunity for dialogue and to build understanding.”

Gilbert said at no point was Holland pressured to alter the content of his research.

“In fact, President Boren used this opportunity to emphasize the importance of academic freedom to both parties,” Gilbert said. “As a taxpayer-funded seismologist for the Oklahoma Geological Survey, Dr. Holland received regular input from a wide variety of Oklahoma stakeholders including energy industry leaders and environmental groups.”

Boren said he was not privy to conversations within the department about Holland’s report, but voiced his support for academic freedom.

“I expressed publicly and privately to Dr. Holland that OGS researchers have full academic freedom and a duty to pursue the truth in their research wherever it leads them,” Boren said in a statement.

“We have learned that wastewater disposal has contributed to increased seismicity specifically based on the pioneering research provided by the Oklahoma Geological Survey. The university stands by OGS researchers and is proud to have played a role in this important scientific finding, which is being used to protect the safety and well-being of Oklahomans.”

Gilbert said the university has no intention of investigating Holland’s claims against Grillot.

“The issues in question arose in a private litigation matter and come more than two years after the departure of Dr. Holland and Dean Grillot from the university,” he said.

Grillot retired in 2015 and maintains that he did not coerce Holland.

“As I have previously stated, I did not put pressure on Dr. Holland to alter his research or conclusions,” he said. “As I have also stated, I believe that Dr. Holland is a good scientist, and I felt that we had a good working relationship.”