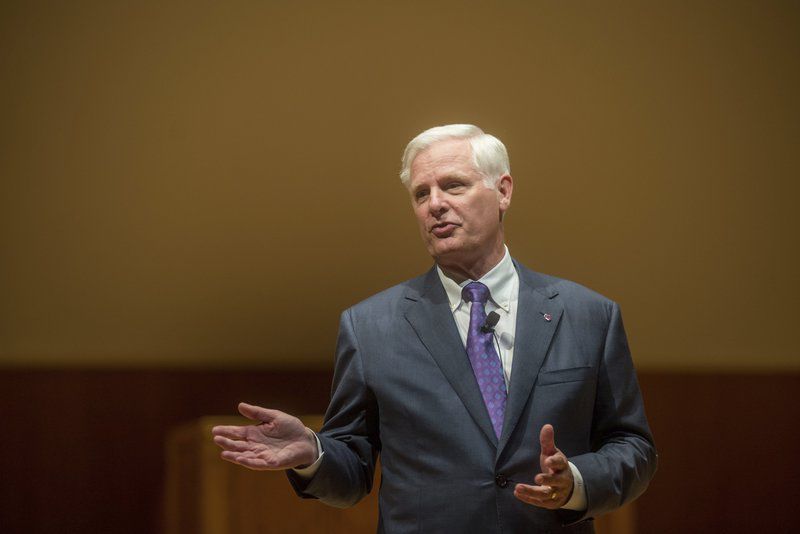 OU President James Gallogly delivers the State of the University address earlier this year to faculty members in Sharp Hall on the OU Norman campus. The relationship between Gallogly and his predecessor, David Boren, has reportedly crumbled over the past few months.

OU President James Gallogly delivers the State of the University address earlier this year to faculty members in Sharp Hall on the OU Norman campus. The relationship between Gallogly and his predecessor, David Boren, has reportedly crumbled over the past few months.

The relationship between OU President James Gallogly and his predecessor, David Boren, has crumbled amid threats and feuding over the financial status of the university and other issues, according to multiple sources within the university community.

Before he took office, Gallogly was critical of the university's financial status in a June 19 OU board of regents meeting. Boren countered with a letter on June 20 to the Transcript, defending OU's finances and stating a significant part of the university's debt was bonded debt with scheduled payments.

Following the publication of that letter on June 20, Gallogly told a senior OU administrator to deliver a message to Boren: “You tell him that I am the meanest son of a bitch he has ever seen, and if he ever crosses me again, I will destroy him.”

The statement was confirmed by multiple sources who spoke to the Transcript on a condition of anonymity for fear of reprisal from Gallogly.

OU interim vice president of public affairs Erin Yarbrough responded to reports of the threat on Gallogly’s behalf in a statement saying, “the situation described and message to President Boren is inaccurate.”

“Mr. Gallogly has been true to his word,” a source with knowledge of the situation, said. “He has been on a continual quest to persecute David Boren.”

Boren, who served as OU president for more than 23 years before retiring this year, responded through his attorney, Bob Burke.

“I never want to get involved in attacking anyone personally, because I have always tried to get along with everyone in my 54 years of public service. It’s my goal to make the transition to the new president as seamless as possible. That’s what I have done and that’s what I will continue to do.

"I just don't want to get involved in name calling and sometimes people say things that they wish could be taken back."

Boren and Gallogly have known each other for decades. Boren served on the board of Phillips Petroleum beginning in 1994, and then for three years after the company's merger with Conoco. Gallogly began working for Phillips in the 1980s, and held executive positions at Phillips Petroleum, Chevron Phillips and ConocoPhillips. In 2007, when Gallogly was executive vice president of refining, marketing and transportation for ConocoPhillips, the company announced a $6 million donation to OU.

Gallogly was also a significant donor to OU during Boren's tenure, highlighted by a $30 million gift in 2015 in conjunction with the Stephenson family that provided funding for Gallogly Hall, which was intended to house the Gallogly College of Engineering's new biomedical engineering department.

It is unclear when the relationship between Gallogly and Boren began to sour, but Gallogly's response to Boren's June 20 letter was certainly a turning point, according to multiple sources.

In addition to Gallogly's warning to Boren, Gallogly told then OU vice president of public affairs Rowdy Gilbert not to respond to a press inquiry regarding the university's finances without his permission or permission from OU Board of Regents Chairman Clayton Bennett, according to a report by the OU Daily. Gallogly was not yet president of OU.

“I want to be clear to you that you are not to send anything to the press on any financial metrics etc. without my express permission or that of Clay Bennett’s,” Gallogly wrote. “That means you are not to follow President Boren’s request to do so without permission from Mr. Bennett as well.”

Yarbrough said Boren's letter to the Transcript, which was published by multiple Oklahoma media outlets, was inaccurate.

Faculty and staff continue to be confused by Gallogly's actions, particularly as they relate to Boren, according to multiple sources. One faculty member, who spoke on a condition of anonymity due to their job at OU, said the OU community expected Gallogly to make cuts, but not minimize his predecessor's legacy.

“We knew that there were financial issues; we knew that we were going to get some kind of CEO-type,” the faculty member said. “What we did not know was how extremely negative this president would be, that he would kind of viciously go after the former president. Something has happened between them.”

According to multiple sources with knowledge of the situation, Gallogly's attitude toward Boren has become increasingly antagonistic since June. Gallogly instructed the Stephenson Cancer Center not to install a plaque memorializing Boren's brother-in-law, Dr. Augustin Henry Shi V, who died in 2016 from cancer. Shi was treated at the Stephenson Cancer Center, and Boren, along with his wife Molly Shi, donated $25,000 to the center with the understanding the plaque would be installed in the center's lobby.

The OU Foundation then returned the $25,000 gift to the Borens per their request, according to multiple sources. OU Foundation President and CEO Guy Patton declined to comment on specific donations, but noted the decision to install a plaque or memorial on university property lies solely with the university's administration.

However, Yarbrough said the Borens' gift needed approval from the board of regents, that Boren asked that the request be “vacated and the gift was returned.”

Boren, a former Democratic governor of Oklahoma and U.S. Senator, had long been criticized for swelling the ranks of OU's vice presidents with hand-picked friends.

Upon taking over as president, Gallogly began slashing administrative positions. Ten high-level administrators who worked under Boren retired, resigned or were laid off since July 1.

Jabar Shumate, a former OU student body president who served as Boren's press secretary from 1998 to 2000, was hired by Boren to serve as vice president for university community following the SAE scandal in 2015. Shumate resigned on July 23, then later stated he was forced out by Gallogly's administration in what he called a “high-tech lynching.” OU released an audit stating Shumate used a university vehicle for personal travel, filed false travel claims and made an irregular purchase of gasoline.

That same day, OU vice president emeritus and senior associate vice president for university development Paul Massad announced his retirement after 58 years at OU. Massad told The Transcript that his retirement was voluntary, and had no comment for this story, but multiple sources indicated the firing of Audas and Tripp was “the last straw” for Massad.

Gallogly's administration decided not to go through with a plan to name a room in Whitehand Hall after Tripp Hall, and on Monday confirmed an OU Daily report that it had hired a private law firm to conduct an internal investigation into OU's development department for allegedly misrepresenting the percent of alumni donors it reported to the U.S. News & World Report. Yarbrough said the university decided against honoring Hall with the conference room because he was no longer employed by OU.

Speaking as an alumnus and donor, attorney Burke said he supports Gallogly as the president but hated to see the university lose so much institutional knowledge with the departures of Hall, Audas and Massad.

“I was really sad to see Paul Massad retire because Paul, having worked for more than 50 years, knew everyone who had given to the university in the last half century,” Burke said. “I also hated to see Tripp Hall go because Tripp was for many years head of the OU Alumni Association. There’s nothing wrong with a new president wanting his or her own people in place. I just believe in continuity. And people like Paul Massad and Tripp Hall and JP Audas, those people were very valuable to the university.

Yarbrough said administrators were not fired because of their relationship to Boren.

“The termination of various administrators was based on the financial condition of the university when President Gallogly took office and a variety of other factors,” she said. “The terminations had nothing to do with President Boren. Decisions such as this require regent’s approval which was obtained in advance.”

Boren currently has an office and staff member at OU and teaches a political science class at the university, per a contract he has with the board of regents. His salary was not listed in the most recent state employee payroll records released by the state’s Office of Management and Enterprise Services.

A request for comment from OU Board of Regents Chairman Clayton Bennett was not returned prior to the publication of this story.