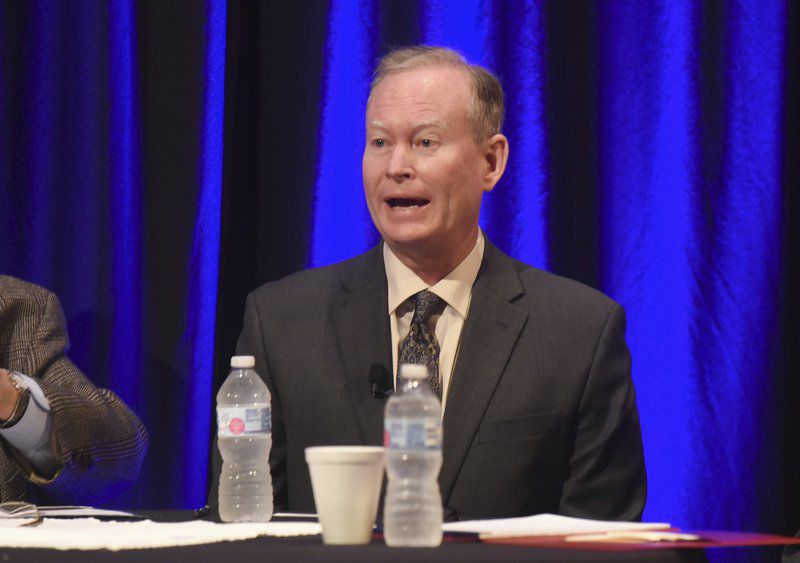 Republican Oklahoma Governor candidate Mick Cornett speaks Wednesday during a round table forum at the Association of County Commissioners of Oklahoma Summer Conference at Embassy Suites. 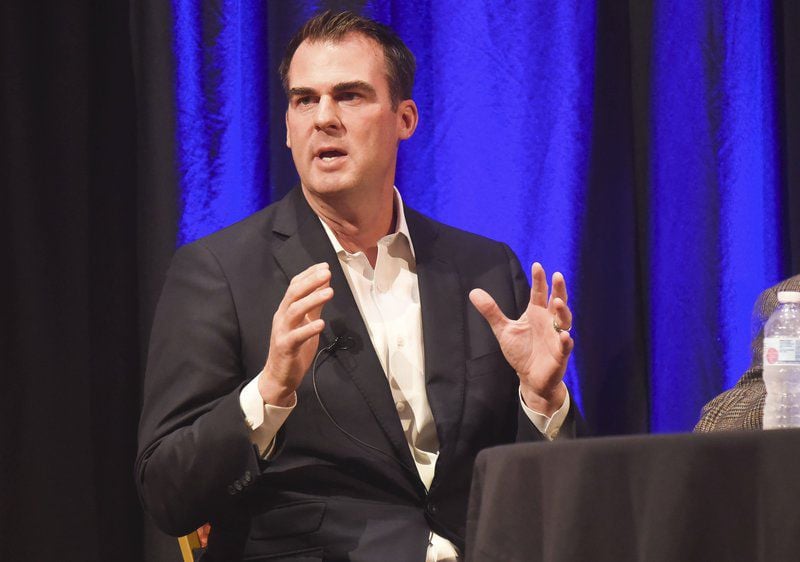 Republican Oklahoma Governor candidate Mick Cornett speaks Wednesday during a round table forum at the Association of County Commissioners of Oklahoma Summer Conference at Embassy Suites.

In just under a month, Oklahomans will head to the polls again to decide who will run for governor on the Republican ticket.

From a field of ten, only two remain: Tulsa-based businessman Kevin Stitt and former Oklahoma City mayor Mick Cornett. Both made campaign stops in Norman this week, including a Wednesday conference of county commissioners at Embassy Suites.

Cornett was also in Norman on Tuesday to attend a breakfast at the Dale K. Graham Veterans Foundation.

According to SoonerPoll, it’s a dead heat. A poll conducted with 483 likely Republican voters between July 18-20 showed Stitt and Cornett each with 37.5 percent, 181 votes for each of them.

A further 25 percent remain undecided, and they will be the focus in these last four weeks of campaigning before the Aug. 28 vote.

Perhaps it makes sense they are so even, given both candidates present themselves similarly. Both say the current Republican administration has got it wrong and they bring a fresh perspective. Both also tout their business acumen, with Cornett presenting the business growth of Oklahoma City and the addition of 100,000 when he was mayor and Stitt pointing to his founding of Gateway Mortgage and its growth into a loan servicing portfolio of $16 billion.

They both want to make Oklahoma pro-business. But how do they attempt to differentiate themselves.

“They can try to differentiate themselves, or as an outsider; the fact is, [Cornett’s] been in politics for 16, 18, 20 years, something like that,” Stitt said. “And I’m totally different. I understand what regulations do to businesses, and how they stop entrepreneurship and growth. I want to be the most pro-growth governor this state has ever seen.”

Cornett, a former broadcast journalist who was then mayor of Oklahoma City for 14 years, said what makes him stand out is his track record.

“We’re focussed on our campaign, and not our opponents. But, I think we have a track record,” he said. “14 years as mayor, and when you’ve been in public service that long, people are obviously going to be looking at what’s been accomplished and what’s not accomplished, and your reputation is going to be based on that. I don’t think any city has come as far and as fast as Oklahoma City.”

Stitt blames Oklahoma’s financial struggles over the past few years on a lack of leadership, something he believes he is best suited to bring. Far from distancing himself from a lack of experience in government, he embraces it and believes voters will, too.

“It’s the same thing I’ve been doing in the private sector for 25 years,” Stitt said. “We incentivize accountability and transparency. It’s the exact way we manage $18 billion in home loans. That’s why I’m the right guy to lead at the right time. I’m not an attorney, I’ve not been a city councilman who had one vote on a nine person panel. We’ve been getting it wrong by hiring people who are more of the political type.”

The trouble for Oklahoma began when state leaders failed to see the need to diversify the economy, Cornett said. Coupled with the elimination of revenue streams without making up for them, this became a problem that quickly snowballed into financial trouble.

“We have failed to diversify the economy,” Cornett said. “We’ve also not protected our revenue streams. By that, I mean I’ve watched as a mayor legislators though the years seemingly give away sales tax exemptions over and over again, which impact local communities as much as they do the state economy. You never haphazardly give up your revenue streams.

“That didn’t seem to be a question legislators asked themselves through the years. By not protecting revenue streams and diversifying the economy, suddenly they needed that revenue, they needed that diversity, and it wasn’t there.”

Part of his vision for that diversification includes encouraging a more positive understanding of education and healthcare in the state, and adding jobs to the state’s agricultural sector. There is no need, Cornett said, for some Oklahoma crops to have to leave the state for the next stage of production. If those facilities were built within the state, it would add jobs and increase the ag footprint in the state.

Which brings up what could be the tipping point for this month’s runoff: rural voters. Both campaigns have been focusing on rural communities, and both have a reason to be optimistic.

The county-by-county map of Republican Primary results in June showed Stitt carried much of the Tulsa area, while Cornett took the Oklahoma City metro with relative ease. Cornett pointed out his plurality also reached out into the west and southwest of the state, cutting its way to the border with Texas, while

But, as Stitt pointed out, that was just in the west. Out east, where Lamb’s support continued, Cornett fell to fourth, fifth or sixth place in the voting, while Stitt continued to place second and third.

Between Lamb, Stitt and Cornett, the former mayor was the only one to not finish in the top three of all 77 Oklahoma counties.

Both candidates will be spending time convincing rural voters that they’re not just city guys. Stitt said he lives on ranch land in the Tulsa area and has cattle ranching in his family’s background, while Cornett is the first of five generations of Oklahomans to not be a wheat farmer.

But, as Cornett said, rural voters don’t necessarily know that.

“They’re very proud of their way of life, they want it preserved and they want a governor who’s looking out for them and understands, emotionally, what it means to be from rural Oklahoma,” Cornett said. “And I don’t think I’ve been disconnected from it, but they don’t know that.”

Stitt said his campaign’s ground game is very active in the rural parts of the state, and he has been and will continue visiting those parts of the state in the weeks to come. While discussing what his campaign will look like in the next month, though, Stitt also singled out Oklahoma City and South OKC, Edmond, Cleveland County and Blanchard as areas to concentrate on, which appears to be an effort to try and take away from Cornett’s advantage in the metro.

However the strategies change and morph, the runoff is expected to be tight.

“Education is a huge part of this, and healthcare is a huge part of it,” Stitt said about his economic vision for Oklahoma. “But a lot of this is PR, and it’s the new perception and vision of our state, and the optimistic outlook that I will bring from the day I step into office. It’s the traditional guard, the traditional guys, that have been in politics in the last 20 years. It’s time for fresh leadership.”