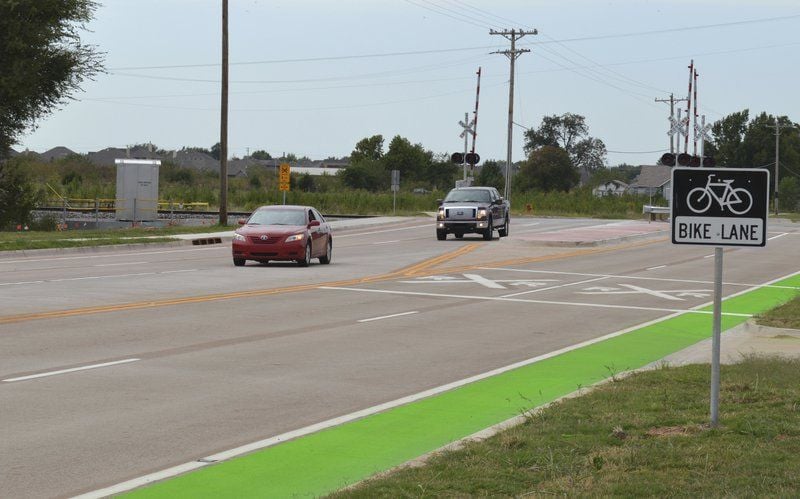 A recently widened section of Cedar Lane Road will have green bike lanes to increase awareness and safety for cyclists. 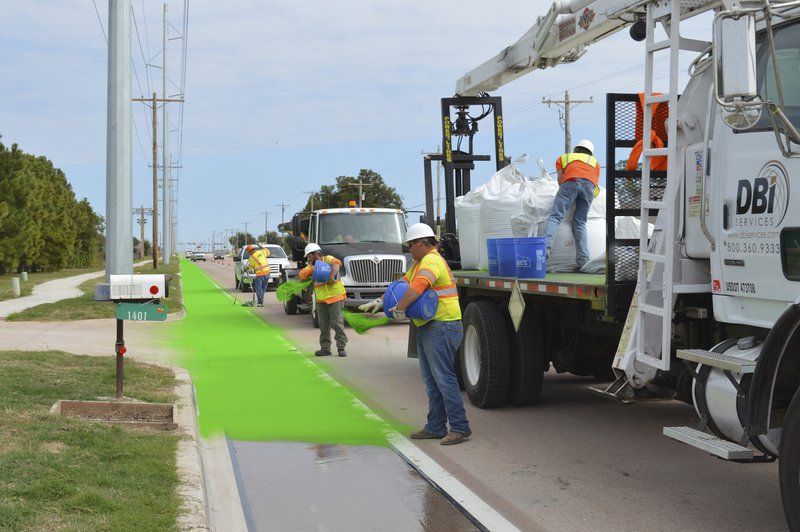 Road crews toss green glass beads onto a bike lane coated in adhesive Tuesday on Cedar Lane Road. The project is believed to be the first of its kind in the state.

A recently widened section of Cedar Lane Road will have green bike lanes to increase awareness and safety for cyclists.

Road crews toss green glass beads onto a bike lane coated in adhesive Tuesday on Cedar Lane Road. The project is believed to be the first of its kind in the state.

Cyclists in Norman may soon be a little bit safer. City contractors are completing what is likely the first 5-foot-wide, colorized bike lanes in Oklahoma. The bike lanes were part of the $9.8 million Cedar Lane Road Widening Project.

“They are very green,” said Michelle Carr, cyclist and member of Norman's Bicycle Advisory Board. “I rode on them the other day.”

The short stretch Carr was able to ride is increasing as work continues along a recently improved portion of Cedar Lane Road.

“Right now, with the incidents we've had this year, I rode for the first time in a month because it makes me really nervous being on the road,” Carr said. “People just don't pay attention.”

Carr's fears are well founded. Every year, Norman cyclists are killed riding roadways throughout Oklahoma. Statewide, about 10 cyclists die annually due to crashes with motor vehicles, according to the Oklahoma Department of Safety.

In 2013, there were two bicyle collision fatalities in Norman and 11 statewide, according the to the Oklahoma Highway Safety Office, while the National Highway Traffic Safety Administration tracked 743 bicyclist fatalities resulting from collisions with motor vehicles.

While there is evidence that more bicycles on the road results in more awareness and fewer fatalities, Norman cyclists are hoping the green bicycle lanes will increase awareness.

“Bike lanes not only give us a place, it reminds people that bicycles have a place on the road,” Carr said. “It's only a small step, but I'm hoping we'll have more roads with designated lanes designed.”

Several years of research by the U.S. Department of Transportation indicates green is the best color for bike lanes. Bicyclists said they felt safer and motorists said the green pavement increased awareness that they are sharing the road with bicycles.

Cedar Lane Road was the first in Norman to be designed with the bike lanes, which were added as part of an overall road improvement project when Cedar Lane was widened to four lanes from 12th Avenue Southeast to half a mile east of 24th Avenue Southeast.

Upgrades include a railroad at-grade crossing, which will become a quiet zone crossing, and 5-foot sidewalks that extend the length of the project on both sides.

The Cedar Lane widening project will be the first completed out of eight transportation projects approved by voters in 2012. The city's share of the project was $3.6 million, with federal dollars contributing $6.2 million of the total cost.

“It's the right location to do this, given how the area is developing,” City Transportation Engineer Angelo Lombardo said. “This is one of the favorite routes of bike clubs in Norman. It has some connectivity to our bike system. We're almost to OU.”

It's also an area with a lot of student-focused apartments. Lombardo wants to connect bicyclists from the south-central part of the city to the university campus.

“It's a very specific shade of green that must be used,” Lombardo said. “We wanted a product that would have longevity. We don't have the money or the crews to be painting every year.”

The Federal Highway Administration suggested the use of the colored green beads. Those are applied with adhesive and create a colorful, texturized bike lane.

“This was the most cost effective and durable option,” Lombardo said. “Hopefully, this will become the standard.”

Once the green beads are laid, bike symbols will be painted on top.

"We'll be done by the end of the week, it looks like," said Jeremy Kendall, Duitt Construction project manager. "Our bike traffic has grown a lot since we've started this project."

More bike lane projects are on the way as the city progresses through the 2012 transportation bond projects. Lindsey Street is coming up next. East 24th Avenue from Lindsey to Robinson streets and 36th Avenue Northwest from north of Tecumseh to Indian Hills Road are in the design stage. A portion of 12th Avenue Southeast that connects to Cedar Lane, crosses Highway 9 and then connects to the existing Oak Tree Avenue bike lane system also will be widened.

“They do include bike lanes,” Lombardo said of the projects currently under way. “We'll have six to seven miles of colorized bike lanes in the city when we're all done with this.”

Articles appearing on The Transcript front page for Oct. 7, 2015.