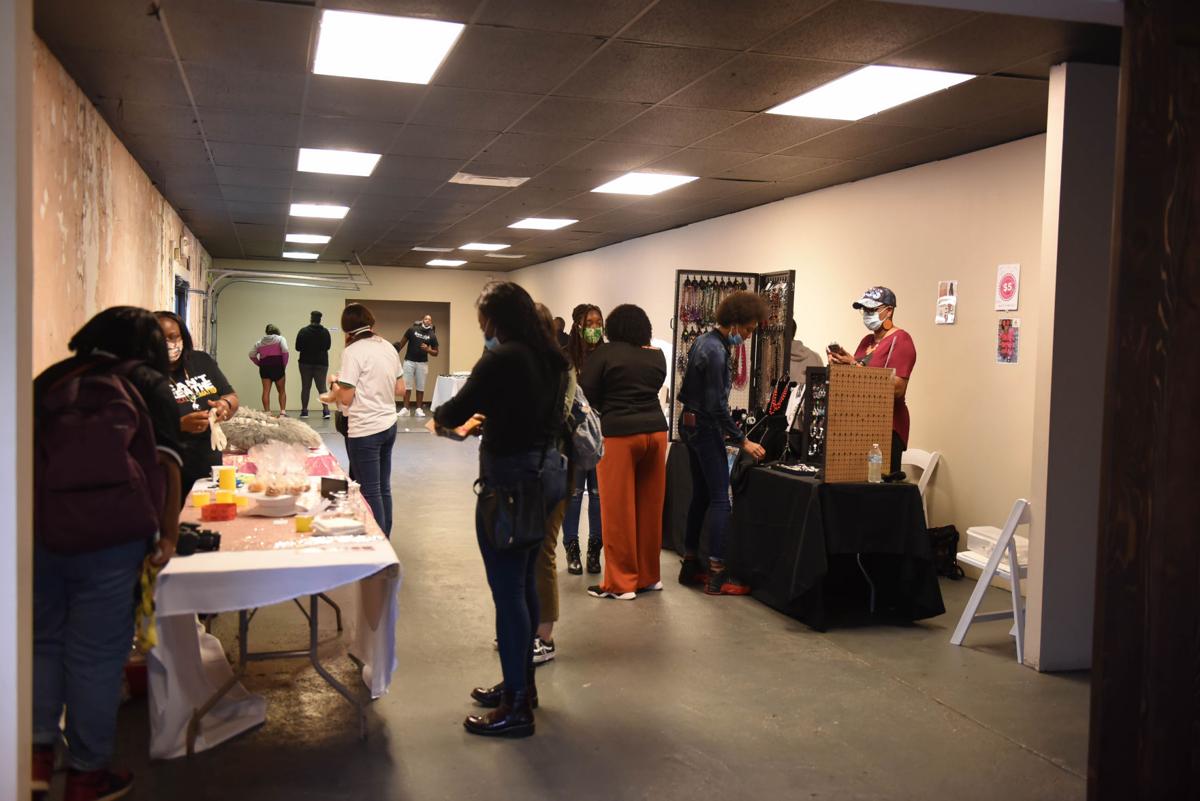 People look at booths during the Norman Juneteenth celebration, Friday, June 19, 2020, at The Mercury. (Kyle Phillips / The Transcript) 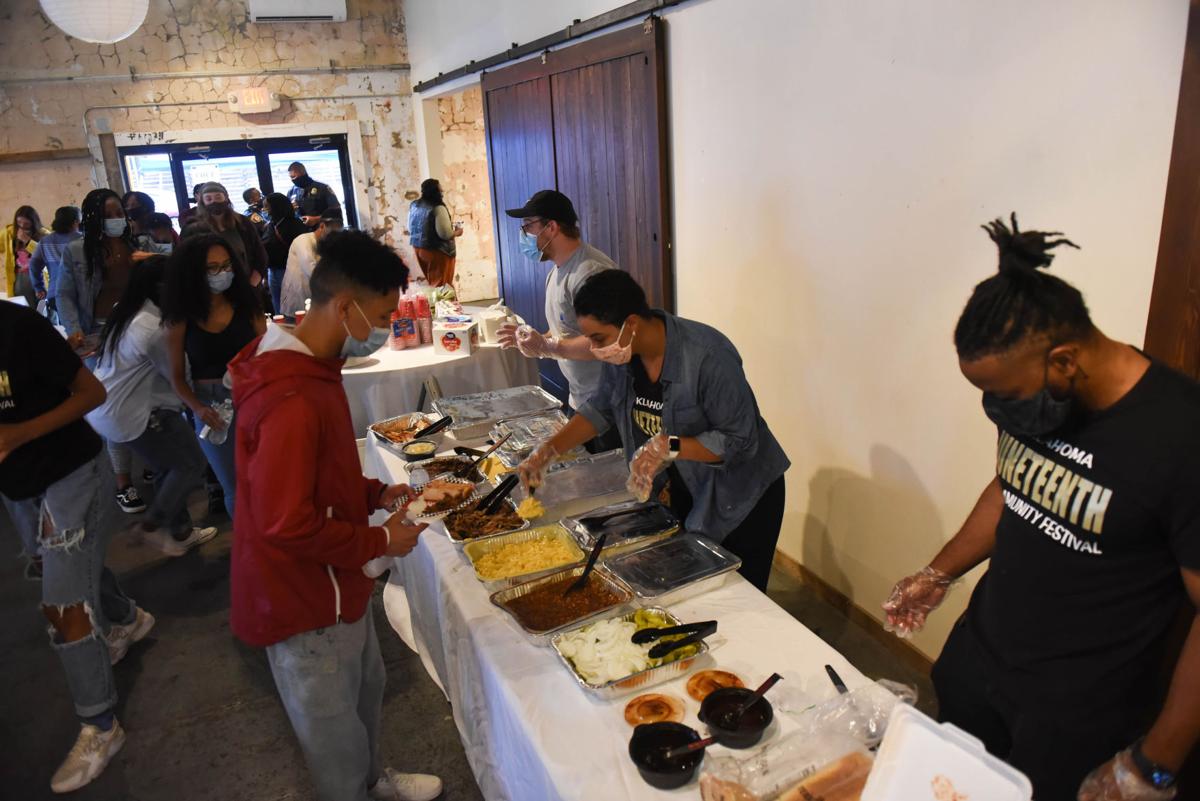 People line up for food June 19, 2020, during the Norman Juneteenth celebration at The Mercury. 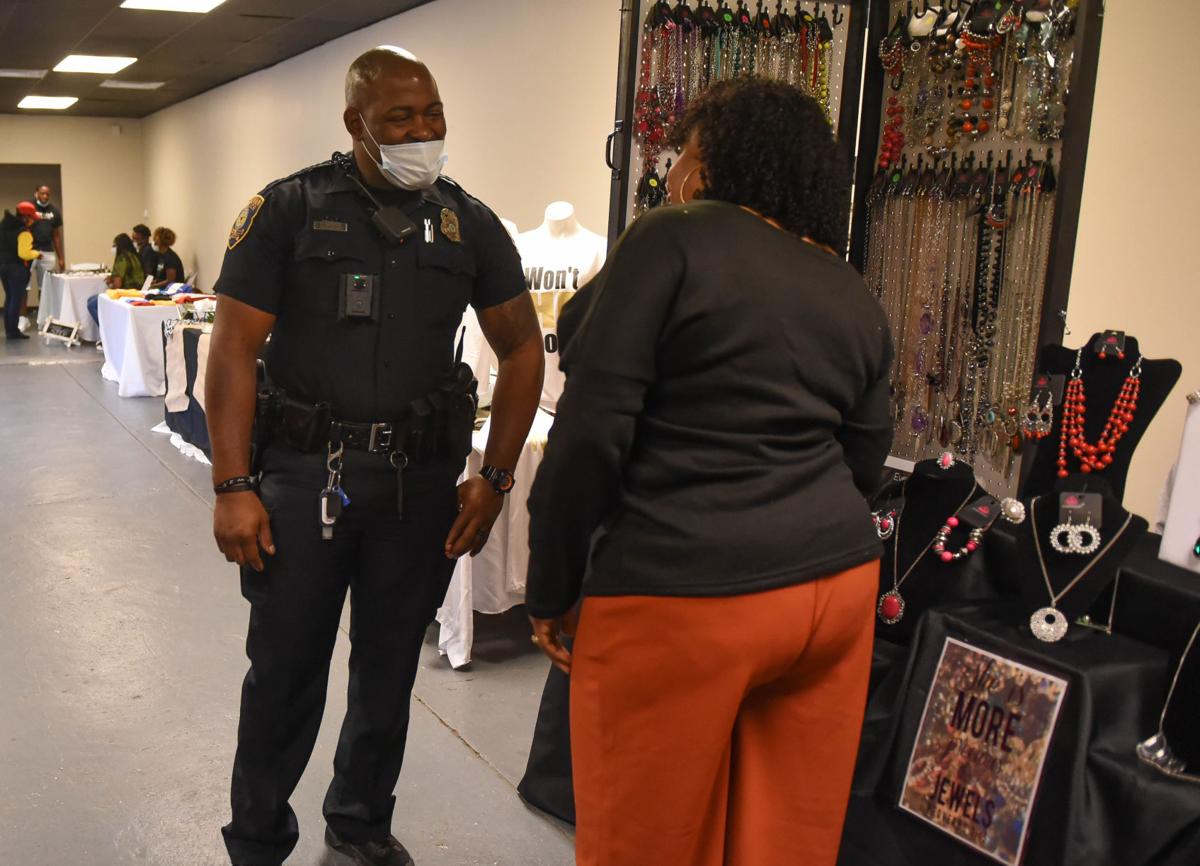 People look at booths during the Norman Juneteenth celebration, Friday, June 19, 2020, at The Mercury. (Kyle Phillips / The Transcript)

People line up for food June 19, 2020, during the Norman Juneteenth celebration at The Mercury.

Juneteenth is a celebration of liberation. June 19, 1865, is the date remaining slaves were declared free.

On Friday, Juneteenth was celebrated in Norman. Even after rain caused the venue to change from Andrew’s Park to the Mercury Center, organizers adapted and were able to put on the event. There was free food, a DJ, booths for local businesses, free snow cones and a raffle.

COVID-19 prevention measures were being taken. From the requirement of masks, to providing hand sanitizer and organizers were checking temperatures at the door as people came in.

“It means the world to me that we’re able to celebrate this here” OU NAACP member Kiana Humphrey said. “Especially with this being a predominantly white city and me being just an African American woman, it just means a lot to me. It means that we’re making progress.”

On June 9, the City of Norman officially declared Juneteenth a city holiday. As soon as the City Council made that decision, planning the celebration commenced.

“Two Tuesdays ago, the Norman City Council officially passed Juneteenth in the City of Norman,” organizer and member of the Black Graduate Student Association Tyra Jones said. “I knew Dr. Bates, who recognized that acknowledgement ... and we got a committee together really quickly and I thought it was important to have a little celebration to recognize (Juneteenth).”

Jones said she was most excited about the organized raffle. In order to get a ticket, attendees had to visit a table. it was a way to give local businesses some exposure, Jones said.

Norman Mayor Breea Clark was in attendance at the celebration. She read the land acknowledgement and the Juneteenth proclamation, which she presented to the organizers afterwards.

“I think this is fantastic,” Clark said. “I like how they filled a clear void in the city of festivals… They didn’t wait for us to do it, they took the initiative. We have an engaged, passionate and driven residents, and here is another example of it.”

Clark said that the city will be adding Juneteenth to the ‘City of Festivals’ lineup and hopes the organizers of this event will assist the city in the future celebrations of Juneteenth.

Once Mayor Clark was done addressing the crowd, the line for food grew and the music started playing. People were walking around talking, shopping and eating. In front of the DJ, people were dancing to the music.

This event was one of many nationwide in celebration of Juneteenth.

Roy Neher, age 69, passed away on September 9th. He is survived by his soul mate of 40 years Kathy, his son Eric, his daughter Kestra and six grandchildren. He enjoyed music, playing his guitar, singing and writing songs. He spent his whole life loving and observing nature. He self-taught hi…