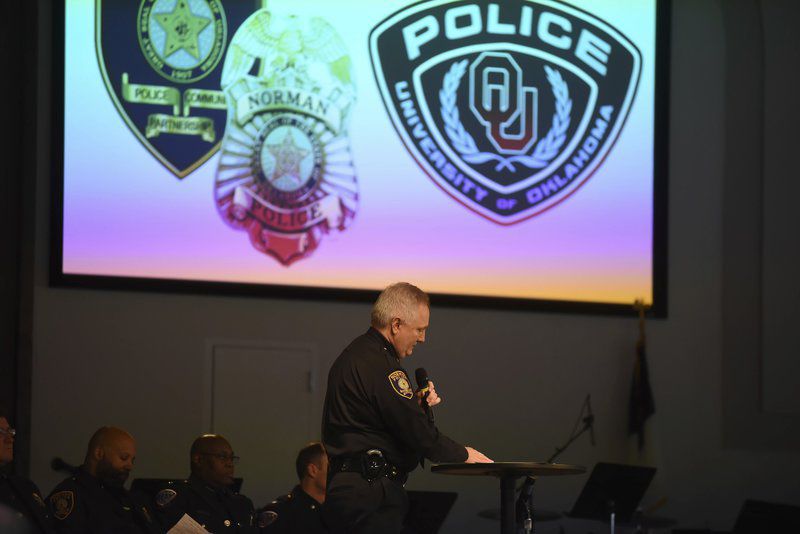 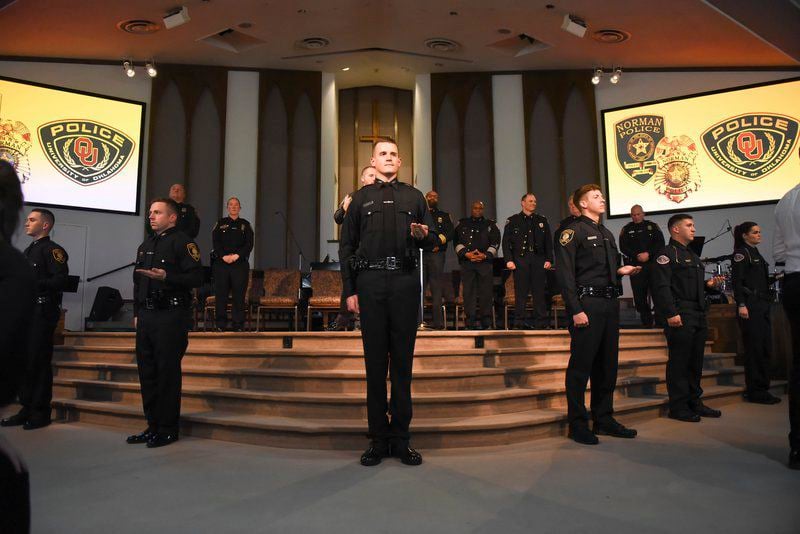 Cadets line up to have their badges pinned on during the 58th Police Academy commencement, Thursday, Feb. 13, 2020, at Bethel Baptist Church.

Cadets line up to have their badges pinned on during the 58th Police Academy commencement, Thursday, Feb. 13, 2020, at Bethel Baptist Church.

Thirteen cadets from the Norman Police Department's training academy walked across the stage Thursday and received their badges as new officers.

The graduation ceremony, held at Bethel Baptist Church, featured 10 new officers who will work for Norman police and three who will serve the University of Oklahoma Police Department.

"This makes us proud," Norman Police Chief Kevin Foster said. "We hire for character and train them to do the job. It takes a lot to become a police officer, especially going through our academy."

The cadets spent 26 weeks in a rigorous training academy that included physical fitness, driving, weapon use, self-defense, academics and more.

Foster also thanked the families of the cadets for the sacrifices they will make by sharing their loved ones with the Norman police department and the community.

"The academy is tough and sticking it out means something," the chief said.

Kent Ray, OU's police chief, said the cadets' families are "joining the ranks of other law enforcement families" who have learned to share their family members with the community on holidays, weekends and nights.

The OU chief also implored the cadets to "treat people like you would want your family to be treated" and to perform their duties "to the highest moral and ethical standards."

Keynote speaker Nate Tarver, police chief at the University of Oklahoma Health Sciences Center, talked to the cadets and audience about the many ways he has served community members during his long career in law enforcement. Tarver spent 26 years with the Oklahoma City Police Department in several different roles and worked at the Moore Police Department.

Tarver often wondered if he had made a difference and any "any effect" on the people he served. Noting that the new cadets will eventually deal with people who are "pure evil," Tarver reminded them about the decent people who only want an officer's help and guidance.

Tarver gave several examples of people he encountered during his career, either as suspects or students in anti-drug classes he taught, who years later noticed him in public and thanked him for his intervention and lessons.

"Learn your job and do your job," he told the cadets. "You will touch someone's life in a positive way."

Cadet representative Rodney Brueggert spoke briefly about the training the 13 men and women received, their bonding during good and bad times and their outlook for the future.

"I remember Day 1 like it was yesterday," he told the audience. "We learned we had a very, very long way to go. We developed a strong bond that can never be broken. We were pushed to be better officers and human beings. The journey is just beginning."

The 13 cadets will spend the next 16 weeks with field training officers before they begin patrol duties on their own, Foster said.