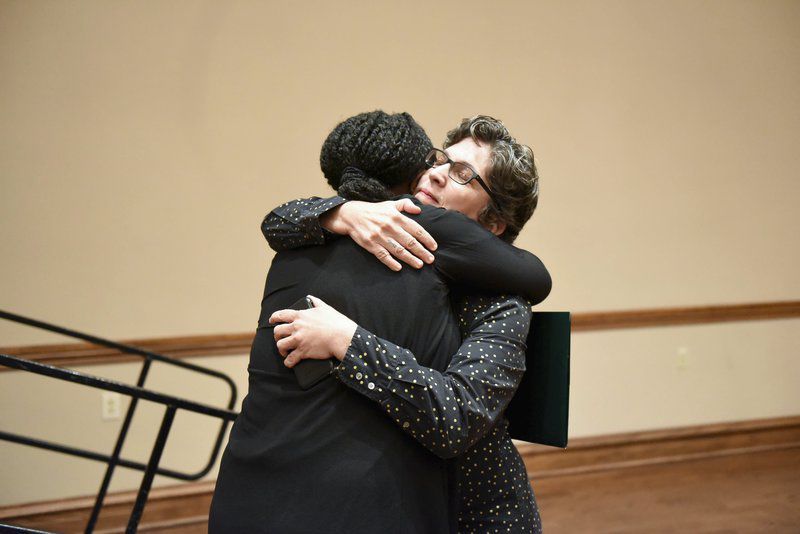 Achy Obejas hugs Edwidge Danticat as Danticat prepares to receive the Neustadt International Prize for Literature during the Neustadt Award Dinner Thursday at the Molly Shi Boren Ballroom at the University of Oklahoma. 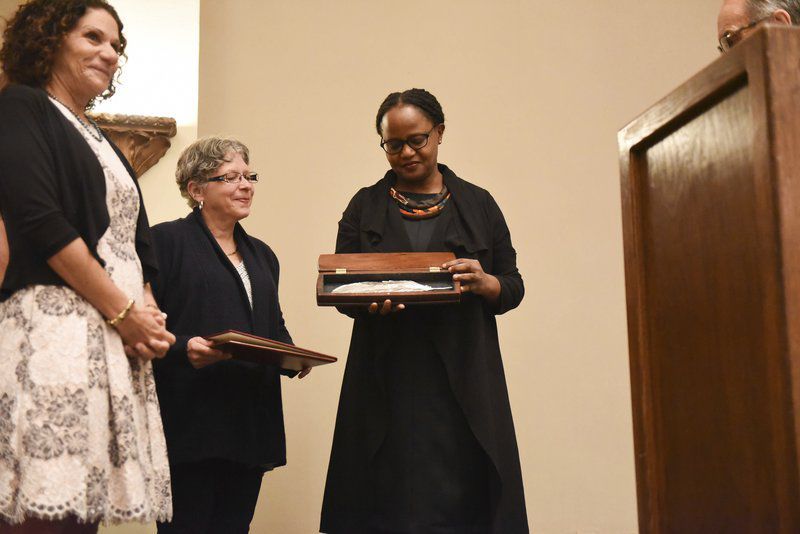 Edwidge Danticat, right, receives a silver feather for winning the Neustadt International Prize for Literature during the Neustadt Award Dinner Thursday at the Molly Shi Boren Ballroom at the University of Oklahoma.

Achy Obejas hugs Edwidge Danticat as Danticat prepares to receive the Neustadt International Prize for Literature during the Neustadt Award Dinner Thursday at the Molly Shi Boren Ballroom at the University of Oklahoma.

Edwidge Danticat, right, receives a silver feather for winning the Neustadt International Prize for Literature during the Neustadt Award Dinner Thursday at the Molly Shi Boren Ballroom at the University of Oklahoma.

2018 Neustadt International Prize for Literature laureate Edwidge Danticat thanked a variety of people Thursday night as she accepted her award in the Molly Shi Boren Ballroom on the OU campus: other authors, her husband and children, Neustadt jurors and World Literature Today staff. But her most profound gratitude was reserved for her parents.

"I want to thank my parents: everything that's happened in my life, including this very moment, was through a door that they opened," she said. "My father left Haiti when I was 2, my mother two years later. They were undocumented for many years, my mother was detained when she was pregnant with one of my brothers."

Danticat's mother recently died after a battle with cancer, and she documented that experience in her work "The Art of Death: Writing the Final Story." During her acceptance speech, the author read a piece reflecting on her mother's death via a surrealist dream featuring one of her mother's purses.

"Mama, this is your purse. It is a purse inside a dream, as if there is nothing left for it to carry in the real world. But I'm still carrying it, like I'm still carrying you," she read. "Mama I miss you, Mama I love you. Mama, know that your baby just won a Neustadt Prize!"

Danticat's first published work, "Breath, Eyes, Memory" was an Oprah Book Club Selection. She was a MacArthur Fellow and her work "Brother, I'm Dying" was nominated for the National Book Award.

Danticat was introduced by author and translator Achy Obejas, who introduced her and was the juror who nominated her for the Neudstadt prize.

"There is, inside of her, an immeasurable reservoir of kindness and an extensive capacity for forgiveness," Obejas said. "A fierce forgiveness, a forgiveness that comes not from fear of the hereafter, but rather from a kind of recognition of our capacity to fall into the temptations of violence, selfishness, irrationality, and somehow still be able to nourish and love."

The prize, which includes a $50,000 award and a silver eagle feather, was endowed by Walter and Doris Neustadt of Ardmore. Their three daughters, Nancy Barcelo, Susan Neustadt Schwartz and Kathy Neustadt, all spoke, discussing the history and purpose of the prize, and praising Danticat for her work.

The sisters endowed the NSK Neustadt Prize for Children's Literature in 2003, whose 2019 winner was also announced during this week's festival: Margarita Engle, a Cuban-American author of many verse novels. Her books have received multiple awards and honors, including the Newbery Honor for "The Surrender Tree" and a PEN USA Award for "The Lightning Dreamer."

The Neustadt prize is often referred to as the "American Nobel," and many of its laureates have gone on to receive the Nobel prize. WLT executive director Robert Con Davis-Undiano began and closed the program.

"Over the years, I know from my own travels, that the Neustadt prizes have helped shape how people view Oklahoma, both in the U.S. and abroad," he said. "The prizes have made OU one of the literary capitals of the world."