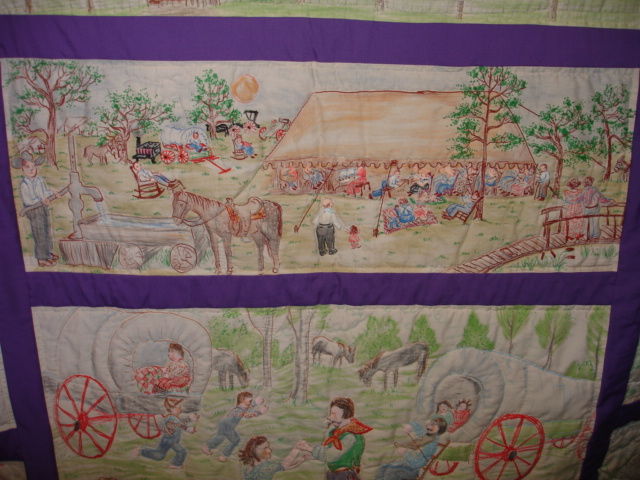 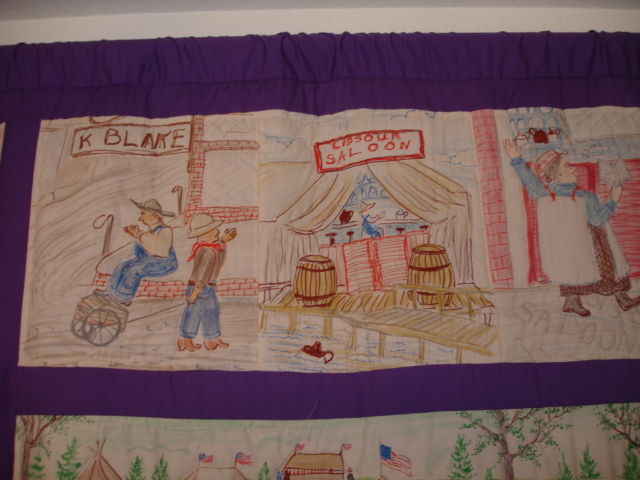 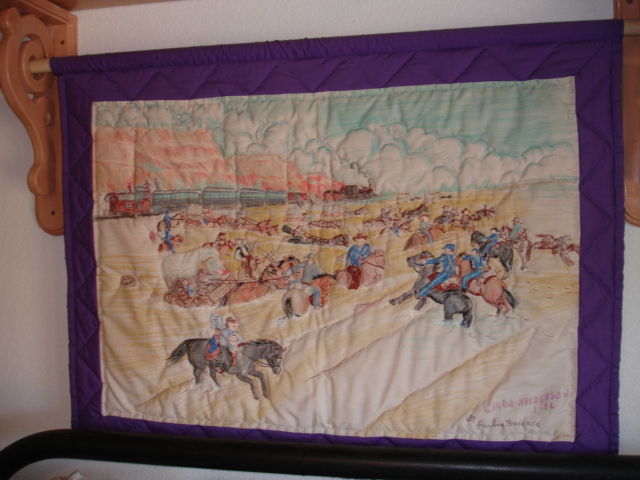 This town that prospered after the Oklahoma Run of 1889, being commemorated here on Saturday, had its own Grandma Moses who has left to posterity a hand-painted quilt marking Lexington’s early boomtown years.

Carrie Olson Henderson also painted a panel showing the Run, complete with a train belching smoke in the background as it pulled into Purcell to unload dozens of land seekers. Numerous riders and their horses are depicted swimming in the South Canadian River that started out at Purcell the morning of April 22, 1889.

Henderson’s great-niece, Linda York of rural Lexington, had the painted panels sewn into a quilt that she will always treasure. She has it displayed in the guest room of her home, above an iron bed.

“I keep the curtain closed in this room, because I don’t want the sun to damage this,” York said. It’s a one-of-a-kind heirloom.

These panels depict everything from the LaSoor Saloon, purported to be one of eight bars in Lexington in the early years. The LaSoors were French Jews.

Another shows a Mrs. McKay, who took in washing from town folks, including the drawers of an early-day banker that were just a flyin’ in the breeze for everybody to see. The washerwoman earned enough money to send her two daughters to college and they became teachers.

About 25 years ago, York got great-aunt Carrie to talk about the history of Lexington that she depicted on the panels, and York made a video of the pioneer woman retelling history of the Cleveland County town.

Henderson’s figures were enhanced by thread embroidered by Pauline Goddard who patiently outlined the numerous figures in the paintings.

The artist’s works also show two women with their children in buggies. The one mother “floored the other one” because she had called the other woman’s baby a “little monkey.” The constable had to put a stop to the fight because the women got so mad that they dumped their babies in the mud and fell in after them.

Henderson also captured on canvas a huge tent prayer meetin’ that usually lasted a couple of weeks. People would bring their families and camp out along Chouteau Creek that runs through Lexington.

The artist and her husband, Adrian Henderson, were schoolteachers. Growing up, Carrie was often called “Red” because of the color of her hair. Carrie said she actually disliked school. She said her secret of being a good teacher was that she did everything the opposite of what her teachers had done to her.

Carrie also could ride a horse better than many a man, her great-niece said.

Lexington’s folk artist lived to be 90, while her paintings cover events not even recorded in history books of the time.