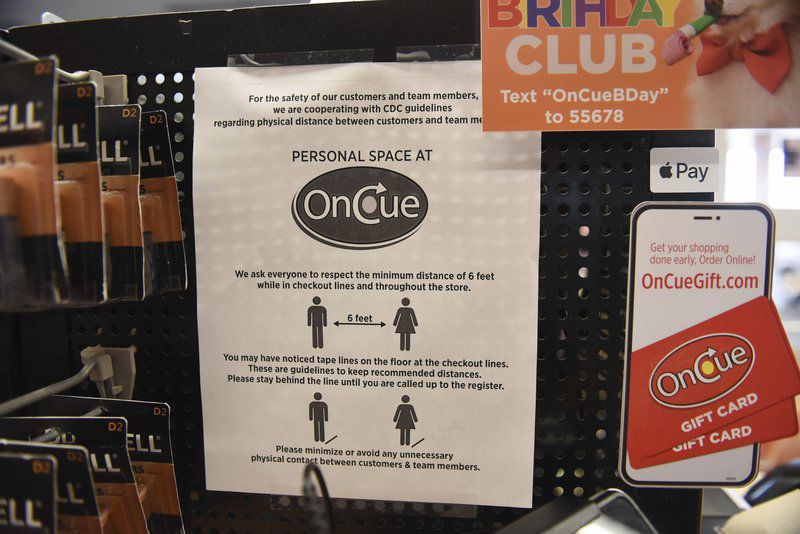 A sign Monday at an OnCue gas station in Norman explains to customers the new line process at the store due to the COVID-19. 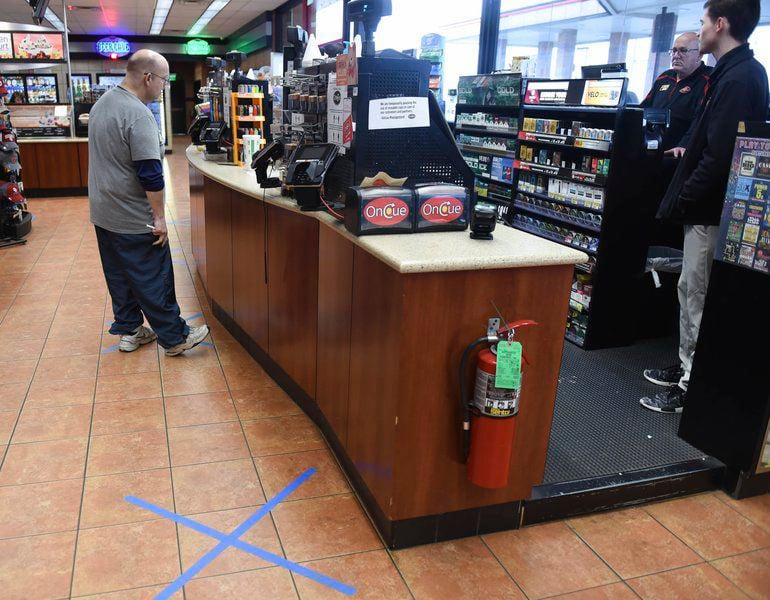 A sign Monday at an OnCue gas station in Norman explains to customers the new line process at the store due to the COVID-19.

NORMAN — Check-out lines in grocery stores and gas stations will look a lot different as these essential businesses implement new restrictions from the City of Norman.

Mayor Breea Clark issued an amended declaration requiring grocery stores, gas stations and pharmacies to implement a six-foot distance between customers standing in lines, but most of them had already started taping the floors and setting up signs.

OnCue gas station spokeswoman Laura Aufleger said every day has been an adjustment.

The company already has shut down drink refills, its hot food dispensary and condiment bar. Now stores are bringing out Duct tape to set points where customers will have to stand in line.

"We were already putting measures in place," Aufleger said. "There will be signs that we have sent out for stores to put on every register, and our supervisors are going around to every store and taping, with I think blue tape, on the floor to show exactly where the distancing markers are going to be. We're working as fast as we can to implement this. That had already been decided and was in the works at the end of last week."

Aufleger said with so many convenience stores in cities across the state, the protocols look a little different, but the company was acting as quickly as possible to juggle them and support employees.

"We have really great employees, and everyone's been working really hard to keep up with everything and to adapt really quickly," she said.

Perhaps an industry that is working as quickly as they can -- besides hospitals and emergency rooms -- are grocery stores.

Homeland Manager Nicholas Lowe has been working to relieve his tired staff and assist with sanitizing efforts. Monday morning, there was already tape on floors six feet apart to comply with the mayor's distancing decree.

"I've been helping every department as much as I can, running back and forth, up and down the aisles, left and right, just trying to make sure everyone's OK and being taken care of and nobody's too stressed out," he said. "It's really hard right now, but you know something's got to give eventually."

The recent scare following a Crest Foods employee's presumed positive test for the virus has people worried about the safety of food, especially produce, which is often not individually sealed and packaged. Crest Foods President Bruce Harroz did not return a phone call to The Transcript by press time Monday.

At Homeland, Lowe said his employees have always been careful about handling produce but have ramped up sanitizing everything food touches, including the bins that hold them.

Some things are standard procedure, like sanitizing produce before it's placed on the refrigerated bins and shelves.

"Every morning when they come in, we scrub every single thing on the produce that we have, even from the day before if we still have it. They still take down the whole entire wall [of produce bins] and they make sure it gets cleaned," Lowe said.

Produce employees wear gloves while handling produce at all times, even while cleaning it in the sinks in the back. Employees are wiping down high-touch surfaces like keypads and ATMs every three hours.

Meanwhile at Sprouts, many employees are wearing gloves and masks. Spokeswoman Kalia Pang said in addition to increased cleaning, they intend to install plastic barriers between cashiers and customers.

"Sprouts will be implementing steps to promote social distancing at the registers, including the installation of plexiglass barriers at the registers to add extra protection for team members working the front end. Masks and gloves are also available to team members who choose to use them," she said in a prepared statement.

Today, Sprouts stores will limit hours from 7 a.m. to 8 p.m. "to let team members rest, refresh and be with their families," Pang said.

According to new restrictions imposed by Clark, hair salons, barber shops and spas were to have closed by 5 p.m. Monday.

Ronnie Dell Pierce (69) of Norman passed away on June 4, 2020. Services are pending with McMahans Funeral Home of Noble.