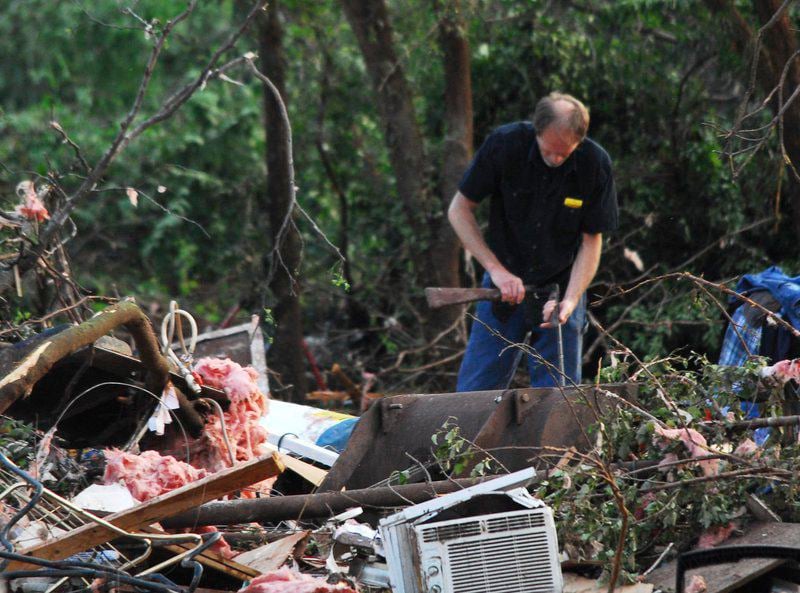 Kenneth Lastinger picks up debris where his house once stood on 156th Avenue NE on May 19, 2013, after a tornado hit the area. 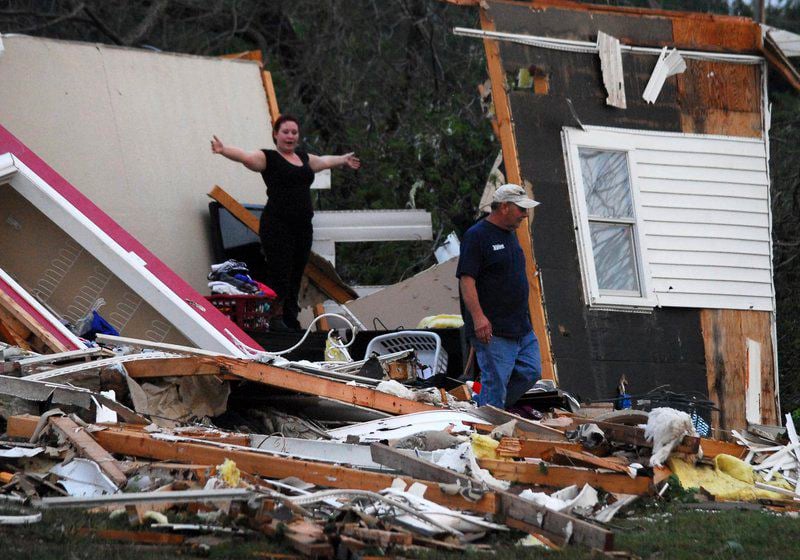 Kenneth Lastinger picks up debris where his house once stood on 156th Avenue NE on May 19, 2013, after a tornado hit the area.

NORMAN — A day before the EF-5 tornado wreaked havoc across Moore, a smaller tornado cut a destructive path across east Norman, leaving damage in mostly unincorporated areas past Lake Thunderbird.

Tuesday marked the seventh anniversary of the May 19 tornado and severe storm that struck Cleveland County near Lake Thunderbird.

According to scanner reports, the initial rotation lowered on Alameda Street between 36th Avenue and 48th Avenue before it touched down on the northeast side of Lake Thunderbird, just north of Little Axe. TV footage showed what appeared to be a tornado crossing the lake, then heading northeast toward 192nd Street toward Pink, Stella and Bethel Acres. Tornado sirens in Norman sounded a minimum of four times.

While Cleveland County Commissioner Darry Stacy had significant experience in incident response before 2013, he had just recently stepped into the job when the Norman and Moore tornadoes hit his district.

"It was truly a trial by tornado," said Stacy, who said he immediately had first responder teams from the county on the ground in Norman on May 19 and Moore the next day.

Most of the damage occurred on the east side of the lake. According to past Transcript articles, at least one neighborhood in the Pecan Valley housing addition in unincorporated Cleveland County northeast of Lake Thunderbird appeared to be wiped out. Part of Pecan Valley lies within Oklahoma City limits. In addition, several people lost their homes on 156th Avenue Northeast and East Franklin Road.

Stacy said his county teams helped clear the way before other first responders were there, clearing debris from roads and making areas drivable for others. In Moore, landmarks and street signs were gone, making directing responders through the city even more difficult.

"[County response teams] deal with a lot of the lasting emotions and issues of all the other first responders," said Stacy, who said the county also saw assistance from surrounding areas and states.

The Lake Thunderbird tornado was one of at least four tornadoes that touched down in central Oklahoma on May 19, 2013. A tornado near Shawnee laid waste to much of a mobile home park. The American Red Cross estimated that 310 structures were damaged or destroyed statewide.

According to the Associated Press, the tornadoes, high winds and hail across Oklahoma, Kansas and Iowa were part of a massive, northeastward-moving storm system that stretched from Texas to Minnesota. Then-Gov. Mary Fallin declared an emergency for 16 counties that suffered from severe storms and flooding.

Norman Regional Hospital reported treating people who were injured from flying debris, trapped under homes or sucked out of homes. Eleven patients were taken to Norman Regional from far eastern Cleveland County.

According to past Transcript articles, 21 people reported injuries statewide, and Glen Irish, 79, and Billy Hutchinson, 76, both of Shawnee, died from the storms. One death occurred at Norman Regional Hospital, where a patient was being treated for critical injuries.

When the storms hit, local responders were reminded just how much the help of non-governmental and faith-based organizations matters, said George Mauldin, director of Cleveland County's Emergency Management. Mauldin also was fairly new to the county job in May 2013 and dealt mostly with the May 19 Norman tornado.

While FEMA provides resources for disaster response, the agency isn't necessarily the first on the ground after a storm and may take days or weeks to get aid to an area, Mauldin said.

Organizations like The Red Cross, Samaritan's Purse and Salvation Army were especially helpful after the tornadoes, Mauldin said. Samaritan's Purse came in to rebuild eight local homes, while the Red Cross gave money to the county and the City of Norman to construct storm shelters for families impacted by the storms.

In the aftermath of the storms, Mauldin said he also witnessed an enormous outpouring of financial support for those organizations.

Because of the heavy media coverage of the storms, NGOs received significant donations to support recovery work, Mauldin said. In his decades in emergency response, Mauldin said he's never seen a donation response like the one after the 2013 storms.

Stacy and Mauldin said that while things haven't necessarily changed much in local emergency preparedness since 2013, there are always lessons to be learned in disaster response.

It's always helpful to have contracts in place before a storm hits to make sure that every aspect of response -- from debris removal to handling FEMA contracts -- is handled by professionals, Stacy said.

It also helps to think outside the box beforehand, said Stacy, adding that when the tornado hit parts of west Moore, he and his team found unexpected damage at horse barns and had to be ready to find access to vets and humane animal care.

As a county commissioner, Stacy said his job doesn't end when the initial story clean-up is over. In fact, the county just wrapped up some of its grant-funded projects from 2013 in east Cleveland County about a year and a half ago.

While disaster preparedness takes flexibility and a willingness to reach out for help, Stacy said, in the end, "truly everybody does come together."

I moved to Norman from Durant, Oklahoma, in May 2010 to work as a copy editor and page designer at The Norman Transcript. I previously worked at The Durant Democrat, where I wrote articles, took photos and designed pages.