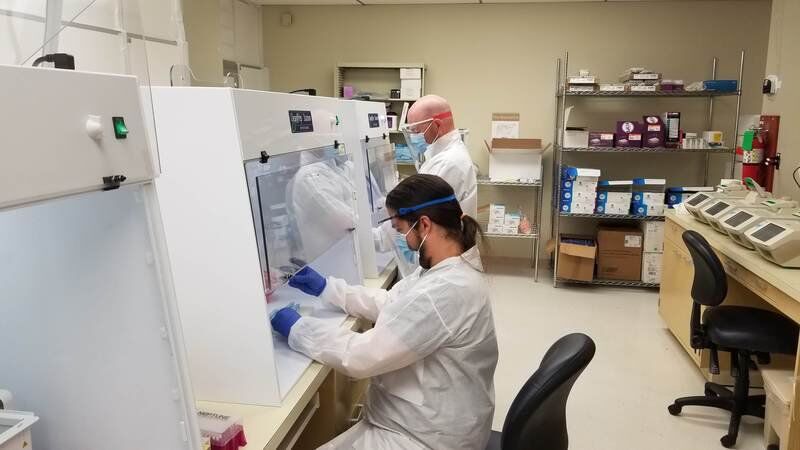 Tyler Shadid, foreground, and Sean Turner process samples in the new viral testing lab created by a partnership between OU and OMRF. 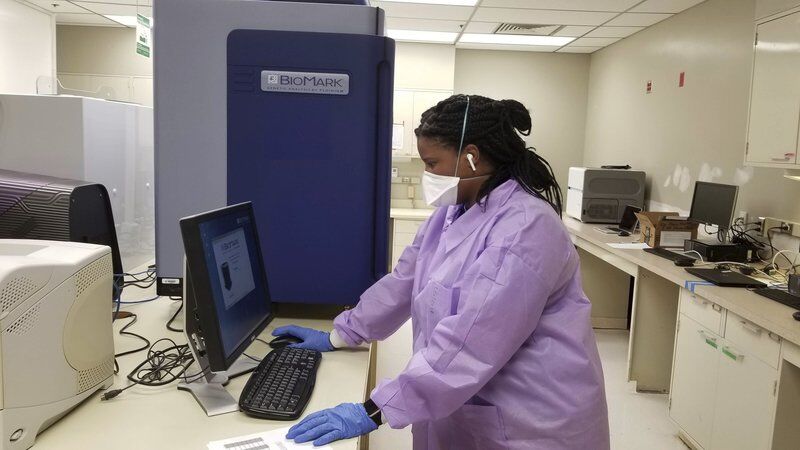 Valerie Lewis processes samples in the new viral testing lab created by a partnership between OU and OMRF.

Tyler Shadid, foreground, and Sean Turner process samples in the new viral testing lab created by a partnership between OU and OMRF.

Valerie Lewis processes samples in the new viral testing lab created by a partnership between OU and OMRF.

OKLAHOMA CITY -- When COVID-19 hit Oklahoma, the state had only minimal testing options available. In most labs with standard equipment on hand, technicians could only complete a few dozen tests per day.

"This was a major unmet need," said Oklahoma Medical Research Foundation scientist Joel Guthridge, Ph.D. "Everyone recognized we had to have more testing."

For help, he reached out to Michael Talbert, M.D., Lloyd E. Rader professor and chair of the Department of Pathology at the University of Oklahoma College of Medicine. They pioneered a new approach to test for the SARS-CoV-2 virus.

Utilizing a Fluidigm Biomark, a $300,000 piece of scientific equipment that uses microfluidics and a technique called reverse transcription polymerase chain reaction (or RT-PCR), they could gather vast amounts of data from limited quantities of sample materials and detect small amounts of virus.

"It was a completely novel idea to use the equipment this way," said Talbert, who oversees laboratory testing operations at OU that generate a total of about five million results each year. "No one had done this."

Under Talbert's guidance, an OU Medicine facilities crew renovated an empty lab to accommodate the personnel and specialized equipment the effort would require. "We made fast changes," he said. "We even put up a wall in one day."

The Biomark system employs a technology known as "microfluidics," minimizing the amounts of precious reagents required to run tests. It also possesses the ability to process multiple samples at once, meaning that it holds the potential to deliver many times more results on a daily basis than a standard testing system.

For months, a joint team of OU and OMRF scientists lived a Groundhog Day-like existence, routinely pulling shifts of 12 hours or more as they refined their testing protocols.

As cases in Oklahoma kept mushrooming, the group felt increasing pressure to get the lab up and running. Still, even a single false negative could send an infectious person back out into the world, triggering a cluster of new cases.

In June, the OU-OMRF team filed its final application with the FDA to launch the new test. Although Talbert described the early days as "training mode," the operation continues to ramp up. Each day, couriers deliver samples collected at OU Medicine facilities and at "swab pods" in Oklahoma City, Tulsa and Norman. Technicians then prepare and load batches of samples, up to 186 at a time, into the Biomark, where each run takes about six hours.

During that time, said Guthridge, the machine tests each sample five times, which ensures accuracy. And because of the Biomark's "sensitivity," it can detect infections other commercially available tests can miss.

Most samples arrive in the afternoon. In a time when testing backlogs often force patients to wait a week or more to learn whether they have Covid-19, the lab typically reports results the following day. Sometimes, they're able to deliver results that same day.

Still, the team is not resting on its laurels. Guthridge and Talbert are working on a concept called pooling that could quadruple the lab's daily testing capacity without using any additional reagents. They're also investigating the use of saliva samples, which would do away with the uncomfortable nasopharyngeal swab in favor of a simple and painless spit-in-a-cup.

Even though the collaboration arose in response to an unparalleled health crisis, Talbert described the process of working with his OMRF neighbors as amazing and fun

"We shared a single goal: to help Oklahomans in an unprecedented time of medical need," he said.