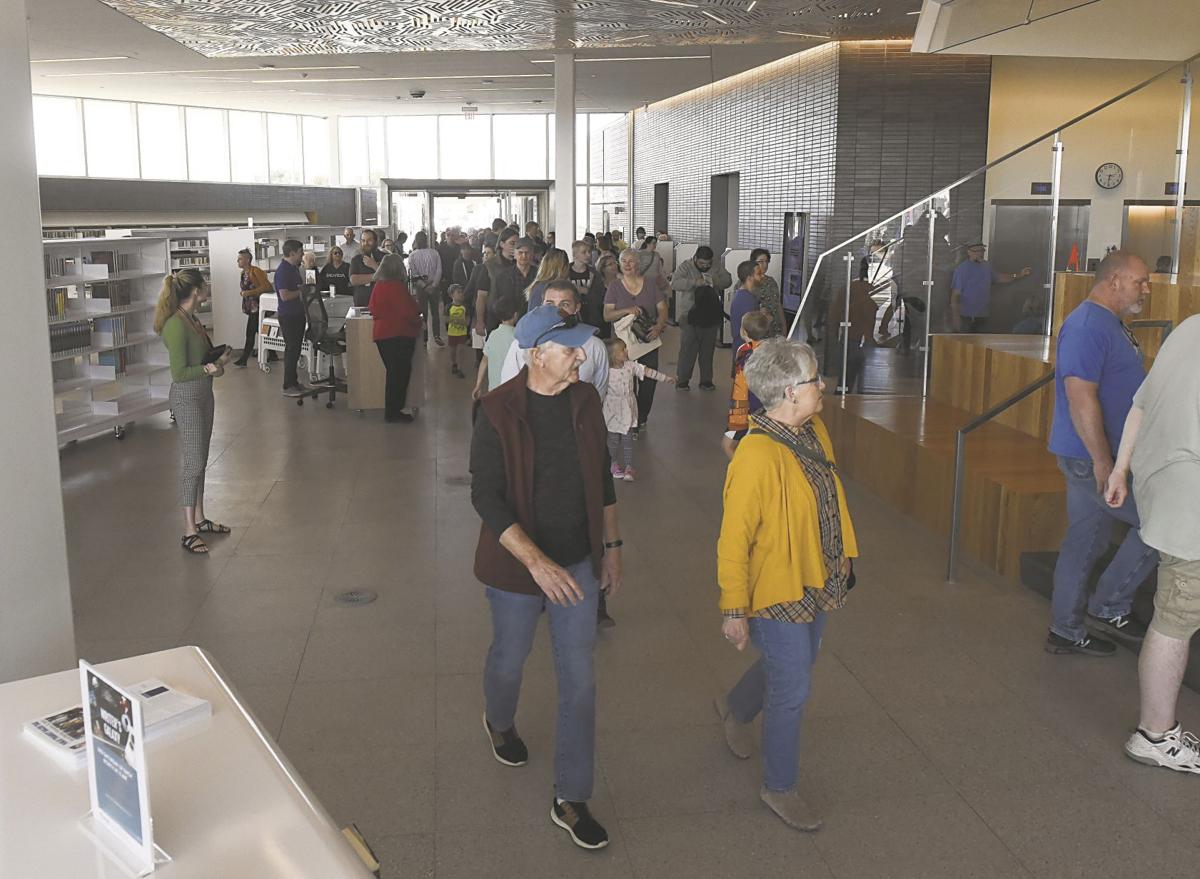 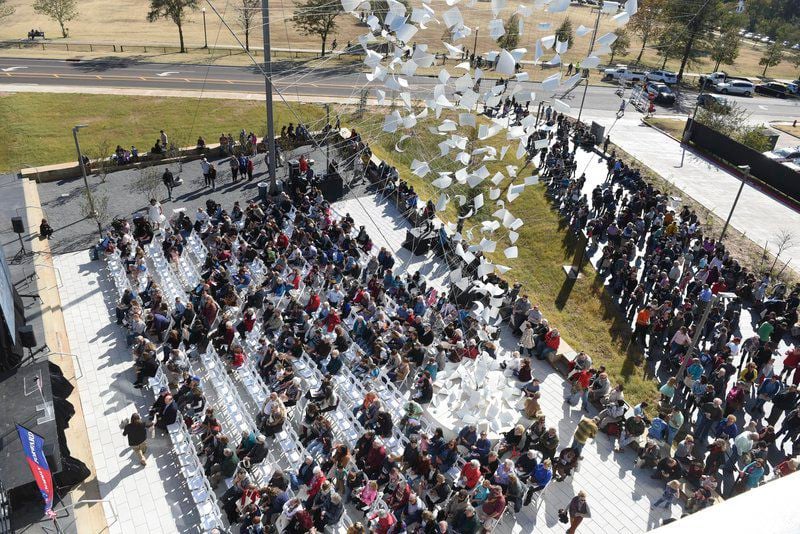 More than 500 people turned out for the Pioneer Library System’s grand opening and ribbon-cutting celebration Sunday afternoon for the new three-story facility on 103 W. Acres St. The library had been operating on Webster Avenue since 1966. Former Mayors Cindy Rosenthal and Lynne Miller on Sunday shared all the efforts made by council, staff, the library system and community leaders to update the library, which go back to 1989 and the bond issue was brought forth in 2008.

“Libraries are essential in terms of promoting civil discourse and democratic values,” Rosenthal said. “Libraries celebrate community, what we are here for today. Libraries embody free speech and inquiry, and they open doors of opportunity and enrichment.”

This project was funded through the Norman Forward quality of life package, which voters passed by a 72% margin in October 2015. The library is the largest Norman Forward project at $39 million, which Dulworth said paid for everything including initial costs and testing.

Felix Rodriguez, 28, and Sarah Warmker, 34, toured the new building and said the library is amazing and something they have been waiting for for years. Norman is investing in its own community through this library, Rodriguez said.

“I feel like it’s the hub that Norman needed,” Warmker said. “There’s been a lot of good things happening on Main Street, but I think this is place has been made highly accessible and is truly made for everyone.”

The new three-story building has a variety of tables and chairs on every floor and sections for children, teens, adults, non-fiction, fiction, and several rooms and areas for studying or working.

After officials cut the ribbon, hundreds of people entered the library wide-eyed and eager to fill their arms with books. Several residents could be seen marveling at all the new library has to offer, occasionally letting out words of amazement.

Miller and Rosenthal said environmental conservation and impacts were top of mind throughout the process. The entire library uses geothermal heating and air through geothermal wells in the parking lot, which Dulworth said makes this building, even with three levels, more energy efficient than former library.

The 78,642-square-foot facility has several walkable sidewalks leading up to it with a 45-foot sculpture called “Unbound” designed by Paul Cocksedge, an artist from London, England, out front. The first floor opens up to a lobby area and a “Market Place,” with DVDs, CDs and popular fiction.

Penny Tunnel, 59, said she loves the layout of the library and the walkability, because now there is a sidewalk almost the entire way from her home to the library. The multi-level aspect and all of the glass windows are another highlight for Tunnel that she said will boost everyone’s spirits.

Billie Sheets and his wife would frequent the Webster location, and he thinks this new location is too big. He said the library will fill up the space over the years, and he intends to still come to the library twice a week with his wife.

Rounding the corner on the first floor is a colorful and open children’s section that features many new children’s books, a children’s story time area, a window bump out for children to read in and playful reading spaces throughout.

“I’m really excited that Norman has a place like this where we can bring children, and they have somewhere safe to go and they can learn,” Amber Kerenge said.

Just outside the children’s section is a computer lab and large staircase that includes an open concept on the side of the stairs where visitors can read or study.

Visitors will find the fiction and teen section after scaling the stairs to the second floor. Beyond the books they will see the technology hub.

There are maker spaces on the second floor that contain technologies such as 3D printers, virtual goggles and laser cutters. Inside the technology hub are broadcasting and podcasting capabilities through the sound and visual labs, which also include a green screen space.

James Francey and his daughter Rowan, 12, said they were immediately taken by the maker spaces and technologies inside. Rowan said she loves the natural light and wishes there was a library available like this when she was younger.

“It’s on par with much larger cities libraries that I have been in,” James Francey said.

Throughout the second floor are a variety of study and meeting rooms, and iPads and tablets that can be checked out next to computers that line the walls. There are also a couple of larger meeting rooms that can be reserved, and a green roof just outside the window.

Sara Doherty and her daughter Penelope have lived in Norman for 10 years and frequented the Webster location. Both are mostly excited about the children’s area, story time and the view the giant windows and third-story balcony provide.

“I think it’s going to be great to just sit up there and look at the city while you are reading a book, and it’s relaxing,” Sara Doherty said.

Following the staircase up to the third floor is the non-fiction area with a history corner. The area includes a giant window, which opens to a walkout overlooking the train tracks.

After surveying the public, Caroline Dulworth, associate director for the Pioneer Library Systems, said people wanted everything from a classic to modern feel. The construction and design crews did a commendable job of blending both, she said. Throughout the library the contrast between modern and classic can be seen through the styles and layout of each space.

“It’s really amazing to see how many people have come in and how everyone has found something else that just delights them,” Dulworth said in response to the grand opening. “There’s a lot of people here today that don’t generally come to the library, and that’s what we were hoping for.”

There is also an above-ground area of refuge near the garage that holds about 100 people, Dulworth said, which would be used in an emergency situation. The refuge has concrete walls, but Dulworth said it’s not a certified tornado shelter.

All 71 employees who worked at the Webster location made the move to the new building, Dulworth said, including 11 security guards, 25 full-time employee with the remainder being part-time workers.

The system bought 50,000 new items for the library, Dulworth said, and removed about 30,000 items. Most of the removed items were damaged, she said, and most were replaced.

To find our more about programs, services and hours of operation for any of the 11 library locations visit www.pioneerlibrarysystem.org or use the Pioneer Library System Connect App.