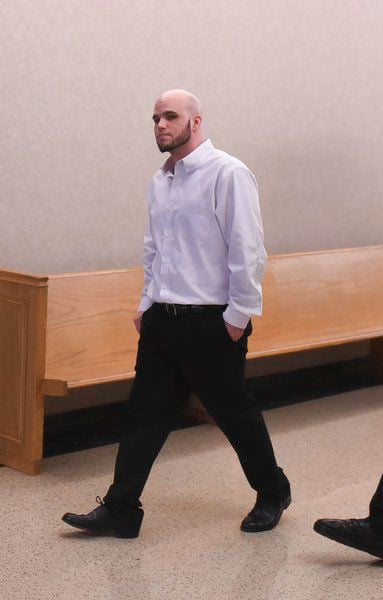 Jake Ryan Holman is lead into the courtroom Wednesday for the start of his first-degree murder trial at the Cleveland County Courthouse. Holman, is charged with killing the 20-month-old son of his former girlfriend. 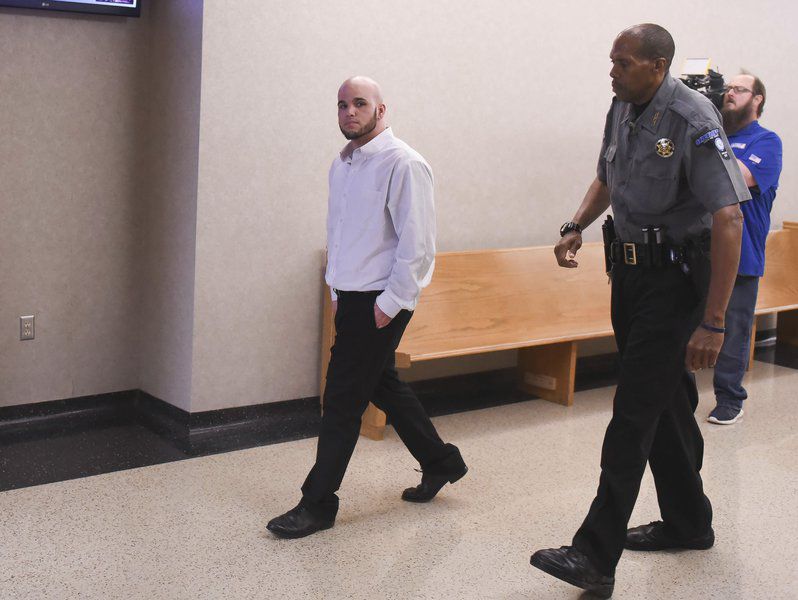 Jake Ryan Holman is led into the courtroom for the start of his child abuse murder trial Wednesday at the Cleveland County Courthouse.

Jake Ryan Holman is lead into the courtroom Wednesday for the start of his first-degree murder trial at the Cleveland County Courthouse. Holman, is charged with killing the 20-month-old son of his former girlfriend.

Jake Ryan Holman is led into the courtroom for the start of his child abuse murder trial Wednesday at the Cleveland County Courthouse.

NORMAN — Cleveland County prosecutors laid the groundwork Wednesday for proving their case in a first-degree murder trial against a 38-year-old Noble man charged with stomping a toddler.

The defendant, Jake Ryan Holman, is charged with killing the 20-month-old son of his former girlfriend. Testimony will continue in front of the jury and District Judge Jeff Virgin today.

The ex-girlfriend, Cydney Cox, told jurors Wednesday that Holman was the last person who was with Maddox Abner before he died sometime late Feb. 3, 2017, or during the early-morning hours of Feb. 4, 2017.

Cox testified Holman found the boy lying face down on the floor and next to his crib about 8:30 a.m. on Feb. 4. Under questioning from Assistant District Attorney SuAnne Carlson, Cox told the jury she last saw her son alive about 10:30 p.m. on Feb. 3 after she put him in his crib.

About 30 minutes later, she left the apartment and bought marijuana for her and Holman to smoke. She returned about an hour later.

Thinking her son was safe and asleep, Cox said she went to bed about midnight after taking a few hits from the blunt. Cox testified she heard her boyfriend get out of bed twice during the night, including once when she saw his hand on the doorknob to the toddler's room.

The next morning, Cox claims she heard Holman scream her name as she was taking a shower. Cox testified she jumped out of the shower and ran naked to the toddler's room where she found Holman holding the boy.

"That's when I realized he was dead," she said.

Cox cried loudly several times during her Wednesday testimony, including one occasion when she described seeing the lifeless toddler.

"One eye was open and other other was shut. He was cold," she said, while weeping.

She also told jurors the boy's tongue was purple and hanging out of his mouth.

"At that point, I was in a panic and dropped to my knees. I wasn't necessarily paying attention to what Maddox had on," she said, in response to a question posed by Carlson. "I knew my son was dead. My mind wasn't there."

Cox sobbed uncontrollably when she talked about trying to administer CPR to her son.

"I blew some of the blood in Maddox's nose on my face and in my mouth," she testified.

In earlier testimony from first responders, Norman Assistant Fire Chief Jason Smith told jurors he responded to the 911 call on Feb. 4, 2017, and noticed bruising on the child's forehead and face and blood spots on his neck and nose areas. Smith also testified Holman appeared "calm" when emergency personnel arrived.

Stephen Yarbrough, an employee with EMSTAT of Norman, testified he also responded to the 911 call and noticed bruising around the child's neck and to the chest.

Yarbrough and Smith said emergency personnel did not attempt life-saving actions because the child was already dead when they arrived on the scene. Yarbrough testified lividity and rigor had already set in.

Yarbrough told the jury Holman was "silent to withdrawn" and Cox was "hysterical and crying 'Oh my God, oh my God.'"

"Usually, people are more verbal than that," Yarbrough told jurors, in a reference to Holman's demeanor.

Prosecutors played the 911 call for jurors as they heard Holman talking to a dispatcher as Cox was screaming in the background. Cox can be heard on the 911 call screaming, "he's gone, he's gone." At another point in the tape, she hollers "he's dead."

Prosecutors advanced their case Wednesday when Cox testified her son's arm was broken while under Holman's care in December 2016. She told jurors the boy's arm was snapped in half under the shoulder. Doctors placed a cast on the arm, which fully healed, Cox said.

Holman told his girlfriend the child broke his arm when he fell off the living room couch.

Investigators with the Department of Human Services became involved and urged Cox to move away from Holman's apartment. The two had been living together for the previous six months. Within days, Cox was staying the night at Holman's apartment again, she testified.

The murder trial is expected to last two weeks.