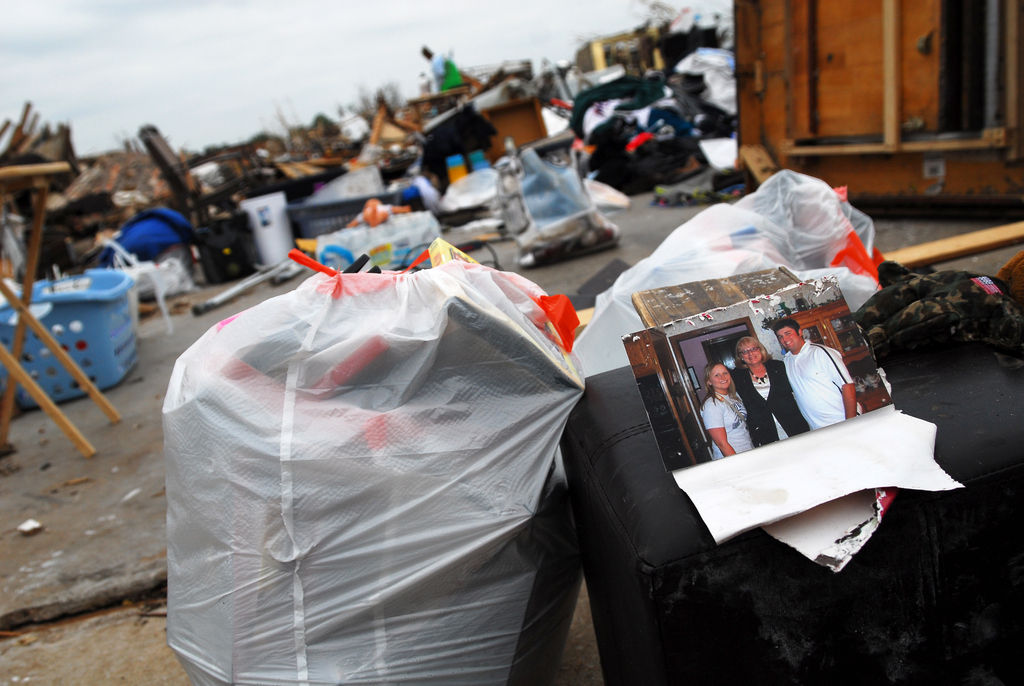 A picture of Southmoore Girl's Basketball coach Britney Kannady-Sayes with her family sits on a pile of her belongings that she has managed to salvage from her house on Kings Manor after the May 20 tornado destroyed her neighborhood. Kyle Phillips /The Transcript 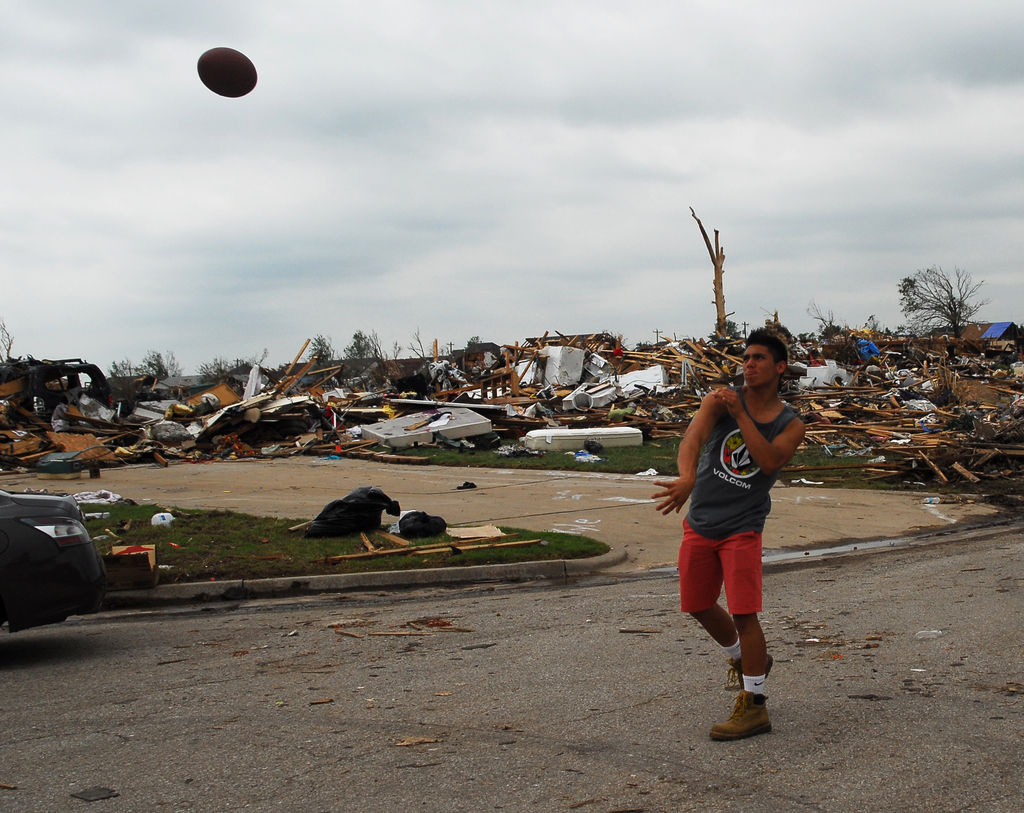 Brandon Dick throws the football around as he takes a break from cleaning up debris around his house Friday morning. Kyle Phillips / The Transcript 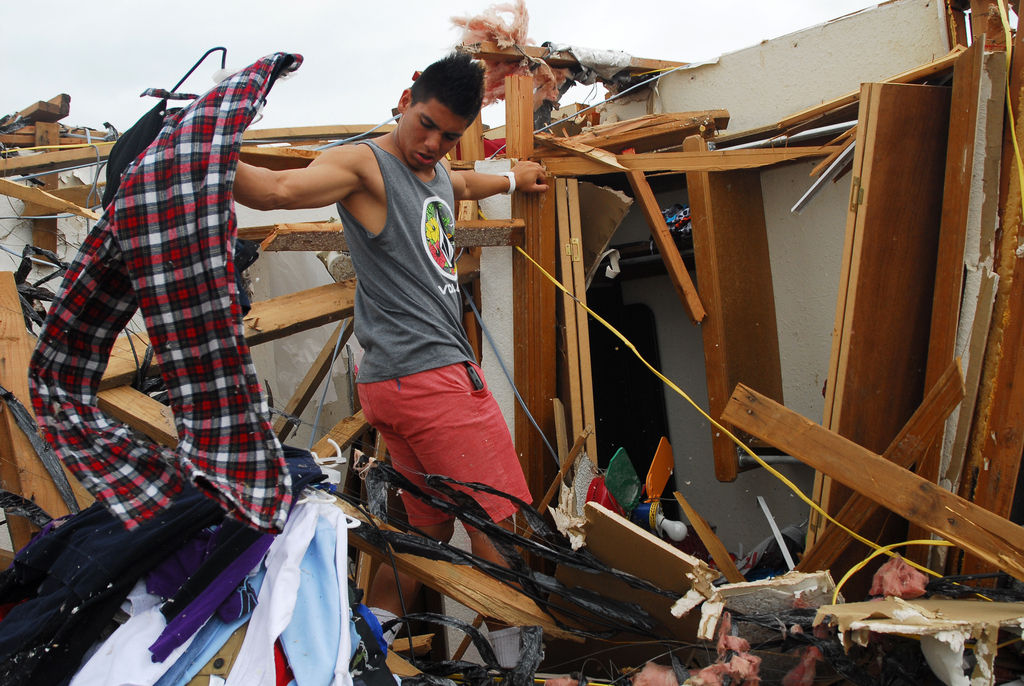 Brandon Dick pulls clothes from his room as he and his family begin the cleanup of their house that was destroyed in the May 20 tonado in Moore, Okla.. Kyle Phillips / The Transcript

A picture of Southmoore Girl's Basketball coach Britney Kannady-Sayes with her family sits on a pile of her belongings that she has managed to salvage from her house on Kings Manor after the May 20 tornado destroyed her neighborhood. Kyle Phillips /The Transcript

Brandon Dick throws the football around as he takes a break from cleaning up debris around his house Friday morning. Kyle Phillips / The Transcript

Brandon Dick pulls clothes from his room as he and his family begin the cleanup of their house that was destroyed in the May 20 tonado in Moore, Okla.. Kyle Phillips / The Transcript

Brandon Dicks’ life is all about football. The Southmoore High School junior safety says he lives and breathes it.

So when Dicks’ house was leveled during the EF-5 tornado that carved its way through Moore for 50 minutes May 20, he reverted back to his gridiron lessons to help him endure the tragedy

“When you get out on the football field, you have to face adversity every single down,” Dicks said. “If you can’t adjust to that adversity, you are never going to win a game. In order to win this game, this tragedy, we have to adjust to adversity. We have to adapt and overcome. That’s exactly what we are doing.”

The homes of several Southmoore coaches and athletes were hit especially hard by the tornadic event. He was one of 38 SaberCats players and coaches who no longer have a home due to one of the worst natural disaster to ever hit Oklahoma.

Yet, Dicks, who was inside a closet at school when the tornado struck, didn’t believe right away the news he was getting about the destruction.

“My stepmom, she sent me a texted message that said ‘the house is gone. Go to your mom’s.’” Dicks said. “That was the last I talked to her for the next four hours. My phone died. Just the way my family is, we are kind of jokesters. I thought she was messing with me. I don’t know why. I guess I didn’t want to believe it. Then I started seeing people getting bad news and crying.”

It finally set in for Dicks when he was allowed to leave school and go home.

“I started crying and slowly started walking up to my house. My friend, Darius Joseph, who also lives with us, tried to come up and hug me, but I was just real angry and real sad. I kind of shook him off. He let me cry it off.”

Kannady-Sayes had been with her team locked in the equipment room during the tornado. After it passed, they started to get reports of the damage.

“One of the other basketball coaches got word that it hit the Moore Medical Center and the Warren Theater,” Kannady- Sayes said. “I said, ‘That’s my house.’ I told coach Frazier to not let the team out of that room until the administration said they could go. But I had to go home because I don’t know where my husband is and my two dogs. I had this feeling that everything was gone.”

Kannady-Sayes’ feeling was correct. After maneuvering through streets that were cluttered with debris, light poles and wires, she made it from Santa Fe Avenue to Fourth Street.

“I actually got lost because there was still debris flying everywhere through the sky,” Kannady-Sayes said. “I live on Kings Manor and one side of it was all gone.

For SaberCat senior wide receiver Jalen Adams, his father’s house was pulverized in the tornado and left him struggling to grasp the tornado’s destruction

“My dad lost his house and his car and everything,” Adams said. “He lived across the street from Plaza Towers.

“It’s tough. It’s been really crazy. Dad is OK. He said that before he went into the storm shelter, he saw his neighborhood. Then two hours later, when he came out it was like he teleported to a whole other place. It’s really crazy. I’ve never seen anything like this before.”

Despite all the bad news associated with the tornado, those affected did their best to find reasons to be thankful.

“I lost my father in a car wreck when he was coming back from a game years ago,” Kannady-Sayes said. “Second to that, this is the worst thing that has ever happened to me. I don’t have words to describe the whole situation, much less that moment when I knew everybody was OK. Everything was gone, but at the same time, for some reason, I was thankful just for that.”

The day after the tornado, Adams got a call that helped pull him out of his mood.

“While I was working, North Texas University called me and offered me a scholarship,” Adams said. “It’s a blessing. I didn’t see it coming. I was having a rough day that day trying to cope with everything that happened. Then to get a call like that, it lets you know things are still going to go on. You still have a future to live. You still have something to live for.”

Debra Jean Eastham, 67, passed from this life in Norman, Oklahoma. Services are pending at this time. Please sign the online guestbook at www.primrosefuneralservice.com