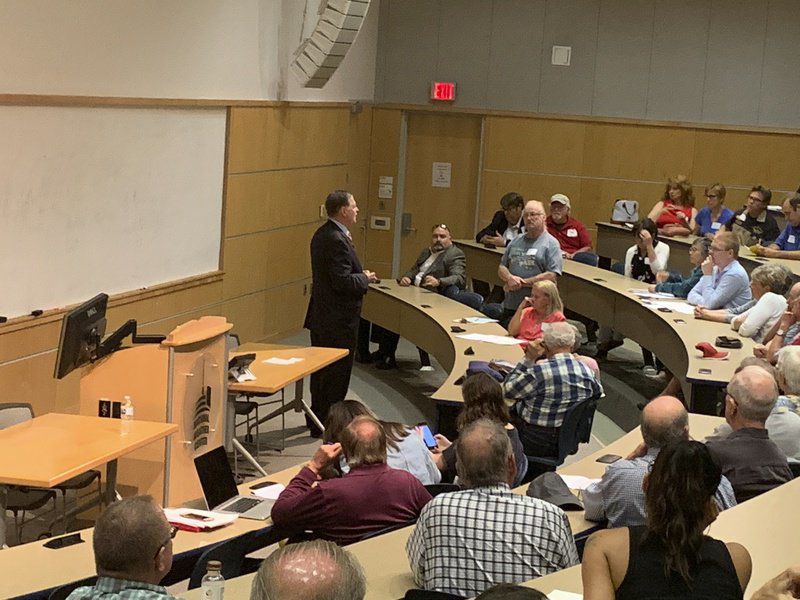 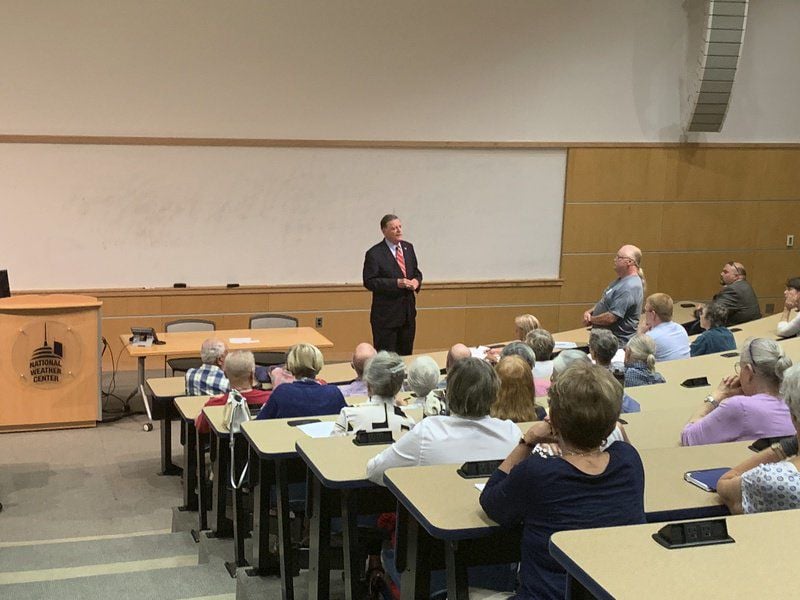 Cole, a Republican who represents Oklahoma’s fourth district, started his town hall meeting at 5 p.m. to a full auditorium of people at the National Weather Center on OU’s campus. After a 10 minute opening statement, Cole took questions from the people in attendance.

The final question was asked around 9:30 p.m., ending a long evening of dialogue between Cole and his constituents.

The town hall covered a variety of topics, with many in attendance anxious for their chance to ask Cole a question. Topics included health care, border security and immigration, climate change, and gun control.

One of the first questions from the audience regarded the recent mass shootings in El Paso, Texas and Dayton, Ohio, with the audience member asking Cole if he believed President Donald Trump’s rhetoric was responsible for the rise in domestic terrorism since 2016. The audience member also asked if Cole and other Republicans in Congress would be more vocal on denouncing what they deemed as “racist” rhetoric from the President.

Cole responded by stating he recently sent out a tweet denouncing Trump’s recent comments regarding four congresswomen of color. He also argued that there is hateful rhetoric on both sides.

“When the President talked about sending [four congresswomen] back to where they came from, I disagreed and tweeted about it,” Cole said. “But this idea that there’s a monopoly on one party using vile and inappropriate language [is where I disagree.] It’s pretty equal on both sides of the aisle. I can’t police the Twitter feed of everybody in America, just like I can’t police people on the other side of the aisle. I regret the rhetoric, but I don’t engage in it. I don’t find any shortage of criticism on either side. I see blind eyes on both sides.”

Another question asked Cole for his thoughts on the difference in cost of health care in America compared to other European countries. Cole argued that health care is a more complex issue in America than it is in other countries.

“We actually have 16 physicians that are members of Congress and [I asked one of them] to tell me the difference between European style healthcare and us, and he said in terms of urgency care they’re about the same,” Cole said. “If you get diagnosed with something here in America, we start immediate treatment. That’s not true for some of these other places, you can end up waiting months.

“It gets down to how many taxes people want to pay and how much control they want the government to have. It’s a complex system. If you look at France and what they pay in taxes, and the percentage of the economy that is controlled by the government, it’s all significantly higher.”

On the issue of climate change, Cole was asked whether he believed in climate change and what impact increasing renewable energy would have on the fossil fuel industry in Oklahoma.

“I actually do believe that climate change is real and that humans are having an impact on it,” Cole said. “I’m all for more renewable energy resources. Last I checked, about a third of Oklahoma’s energy comes from wind power. That makes us one of the leaders in the country in this area. I just think we need to look at different ways of addressing this problem, and we shouldn’t sacrifice our economy to try to fix it.”

Rep. Tom Cole will be hosting four more town halls in the coming weeks, including one at the Moore Public Library on Friday, Sept. 6 at 12 p.m.