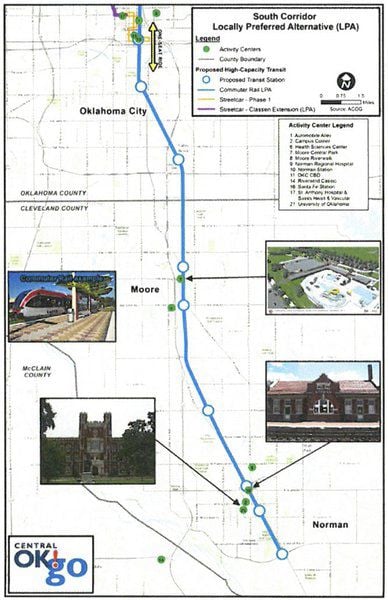 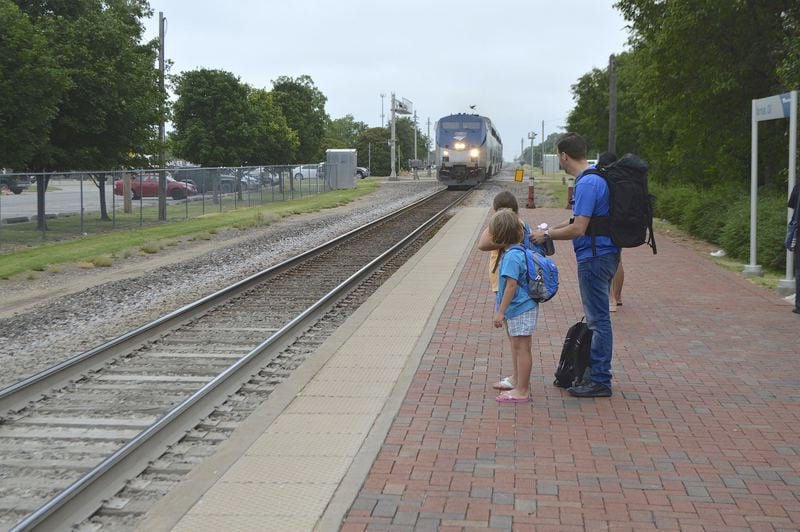 The effort to create a regional transit authority is inching down the tracks.

On Tuesday, Association of Central Oklahoma Governments (ACOG) acting executive director John Sharp and Kathryn Holmes, of Holmes & Associates, gave a presentation to the city council on regional transit dialogue that highlighted progress and optimism for the long imagined transit plan that would connect Norman, Edmond and Oklahoma City by commuter rail.

The plan for the south corridor, which includes south OKC, Moore and Norman would place four stops in Norman, with locations at Tecumseh Road, The Depot, Lindsey Street and Highway 9.

It would place two stops in Moore and expand urban transportation options in Oklahoma City.

Regional transportation committee chair and former Mayor Cindy Rosenthal said it’s a good plan, and progress is being made, but there’s still a long road ahead.

Perhaps the most pivotal step is convincing cities in the region to get on board. More cities on board means more funding, more stops and a more connected system.

The plan calls for the creation of a regional transit district, and subdistricts, the borders of which would be dictated by population.

Holmes said she hopes to see cities voting on whether to join the district by the fall.

Rosenthal said though nothing is set in stone, a half-cent sales tax has been explored as a funding mechanism. The federal government would supply the lion’s share, but only if the plan can best competitors for those dollars.

Rosenthal said the key to securing federal funding — which would pay for 80 percent of the project — is thinking regionally.

“Transportation is regional,” she said. “Service that is not connected is sub optimal. And the federal government recognizes that.”

For now, Holmes and Sharp said the focus is on securing the next steps in the process:

• Meeting next month with ODOT

Sharp said the first train could roll out by 2025, but that won’t be the only thing rolling.

CART’s $1.7 million in annual federal funding would be safe under the RTA proposal and the plan’s scope calls for expanding bus routes, light rail in Oklahoma City and connecting all the pieces of the transportation puzzle to create flexibility and reach.

“This isn’t just about the rail,” Mayor Lynne Miller said. “It’s also about expanding our buses, street cars and other types of modes of transportation within the region.”

Keeping one foot in front of the other is the focus now, but Holmes said she believes in the idea and thinks Oklahomans will get behind it.

“When you get that first line open, everything switches from the naysayers to when do we get our line,” she said.

Ward 3 council member Robert Castleberry said he believes if OKC is on board then everyone else will follow suit.

“It’s a baby step for national connections. Basically, what you’re going to have is an additional 14 miles of track that’s upgraded through Oklahoma City,” Stair said. “That puts more interest in capacity improvements to connect Heartland Flyer service into Kansas for connection with the long-distance train from Chicago to Los Angeles.”

Passenger Rail Oklahoma is a grassroots advocacy organization dedicated to preservation and expansion of passenger rail in Oklahoma, Kansas and the surrounding region. Stair said a regional transit authority is something group has advocated for nearly two decades. The biggest roadblock has been funding.

But those cost projections are in 2014 dollars. Sharp said a new assessment would paint a more accurate picture of the rising costs.

The good news, Stair said, is that money finds its way back into the state economy. According to a 2010 study by the Texas Transportation Institute, there is a 3 to 1 commercial impact for communities that have Heartland Flyer stops.

“For every dollar that’s spent subsidizing Amtrak service, three or four dollars are returned through restaurants, hotels and other attractions,” Stair said.

“Our economy rides on transportation corridors, regardless of mode. A lot of critics look at rail spending as taking away from road projects. Well, we can’t continue building roads the way we have for the past 70 years. It just makes the traffic jam wider.”

To his point, ACOG projects that by 2040, the region will be home to about 1.6 million people, an increase of 40 percent. With that increase, it projects 46 million traveled vehicle miles by 2040, which is a 54 percent increase over 2010 levels.

“I think they’ve already been convinced,” he said. “When you look at the downtown development in Oklahoma City, with the Oklahoma City transit hub at the Santa Fe Station, the city has already received federal funding for that project. So, there is an endorsement of sorts there.”

If Oklahoma City’s vision is successful and an RTA is formed, he believes that could even soften Tulsa’s reluctance and be the catalyst for bigger things down the line.

“I think that we have reached a point, and a lot of this has to do with the leadership shown by former Mayor Rosenthal and the other communities that decided to set this up. Nothing like this could’ve happened 17 years ago without local advocates really pushing for it to happen.”