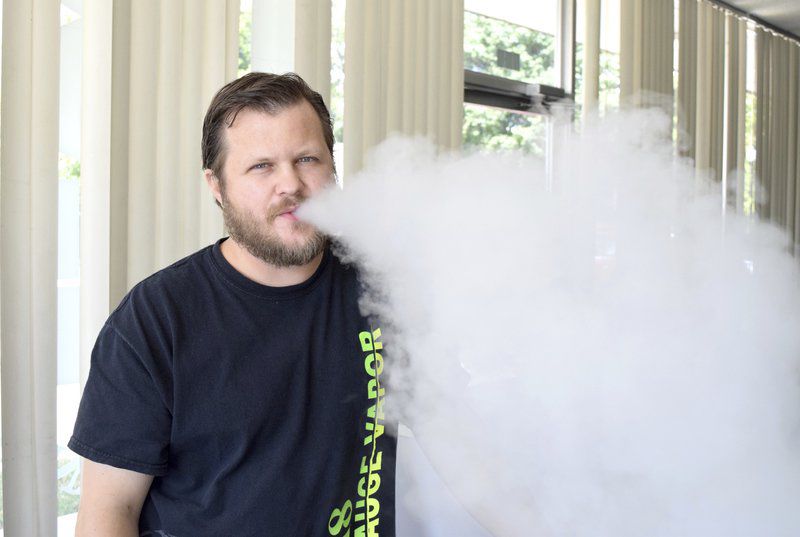 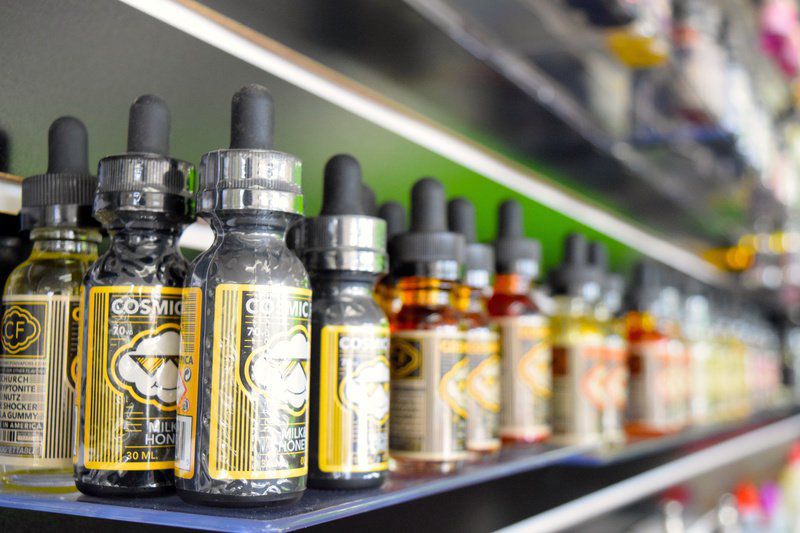 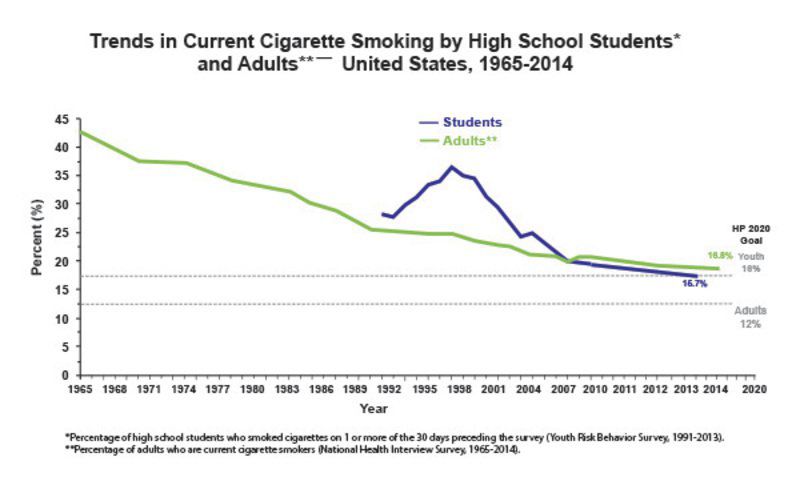 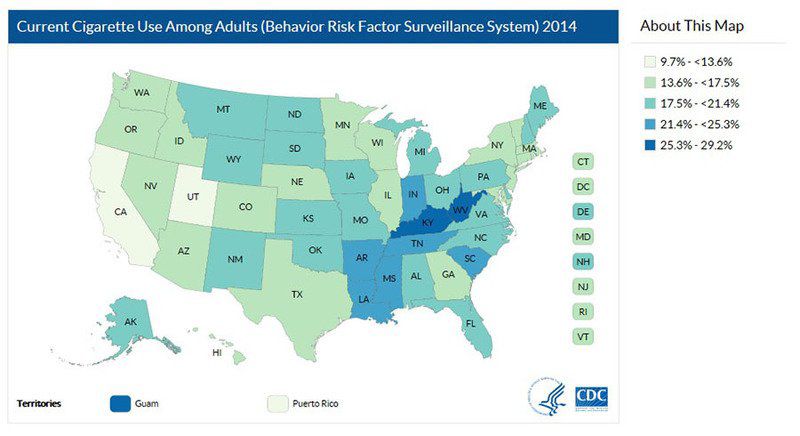 New FDA regulations went into effect last month that will make it illegal for minors to purchase electronic cigarettes. Many public health officials have praised the new rules, which will prevent anyone under 18 from purchasing e-cigarettes and related products.

“We want parents to know that nicotine is dangerous for kids at any age.” CDC Director Dr. Tom Frieden said in a statement. “Adolescence is a critical time for brain development. Nicotine exposure at a young age may cause lasting harm to brain development, promote addiction, and lead to sustained tobacco use.”

According to the CDC, 2.5 million middle and high school students used e-cigarettes in 2014.

According to the FDA, more than 2,600 kids try their first cigarette and nearly 600 kids become cigarette daily smokers every day. During 2011-2015, e-cigarette use rose from 1.5 percent to 16 percent among high school students.

Local vapor shop proprietors see the move to prevent underage purchase as a positive one and many even prohibited under 18 purchases from day one. But the new regulations don’t stop there and some see them as a way to protect big tobacco and stifle innovation.

“I think big tobacco is waiting until regulations bleed the industry and they’re going to come out and ‘save the day,’ because they can afford to take the financial hit,” Flavor Vapor General Manager Duncan Skaggs said. “So far, I haven’t heard of any Norman shops going out of business, but the regulations are extremely complicated and confusing.”

The new regulations prevent vapor retailers from servicing devices, creating products in house — from delivery systems to e-juice — giving away samples and sharing information, even anecdotal information, about the products potential use as smoking cessation devices.

“I can’t say I quit smoking. All I can say is I switched to vaping,” Skaggs said. “And the American Spirit guy can give you a free pack of cigarettes but we can’t let our customers sample juices. How is that fair?”

What’s in an e-cigarette

E-cigarettes are battery powered devices that use heat to convert liquid (e-juice) to vapor.

Regulation proponents say that lack of uniformity and regulation makes it harder for consumers to make an informed decision.

“So, I tend to tell them it’s not regulated,” Deming said. “Watch out. I think some people don’t like the idea that longterm effects aren’t known and they’re not regulated. But I don’t tell patients that it is worse than a combustible cigarette.”

According to a 2015 CDC report, electronic smoking devices could create a public health benefit if smokers switch completely to noncombustible cigarettes and assist in the “rapid transition to a society with little or no combustible tobacco use.”

But the CDC also reports that e-cigarette aerosol is not harmless water vapor. In addition to nicotine, e-cigarette aerosol can contain heavy metals, ultrafine particulates that can be inhaled deep into the lungs, and cancer-causing agents like acrolein.

The CDC report notes that e-cigarette aerosols also contain propylene glycol or glycerin and flavorings. Some e-cigarette manufacturers claim that the use of these ingredients is safe because they meet the FDA definition of “generally recognized as safe” (GRAS). However, GRAS status applies to ingestion of these ingredients (i.e., in food), not inhalation. The health effects of inhaling these substances, including from an e-cigarette, are unknown.

The modern e-cigarette was invented in 2003 by Chinese pharmacist Hon Lik, who reportedly created the device after his smoking father died of lung cancer.

Since then, hundreds of studies have been conducted, but the medical community still has no consensus on the health effects of e-cigarettes or their effectiveness in helping smokers quit.

According to a research paper published in 2014, smokers who use e-cigarettes are more likely to report continued abstinence than those who used a licensed nicotine replacement product or no cessation aids.

Spearheaded by Cancer Research UK Health Behavior Research Centre specialist Jamie Brown, the study sampled over 5,000 smokers in England and found the difference persists after adjusting for a range of smoker characteristics such as nicotine dependence.

Other studies have arrived at the opposite conclusion.

“As currently being used, e-cigarettes are associated with significantly less quitting among smokers,” wrote Dr. Sara Kalkhoran, former clinical fellow at the UCSF School of Medicine. “E-cigarettes should not be recommended as effective smoking cessation aids until there is evidence that, as promoted and used, they assist smoking cessation.”

Jerry Deming has worked as a registered nurse and tobacco treatment specialist at Norman Regional Hospital for nearly 10 years. She said the medical community is very divided on the topic.

“Some say it’s more dangerous than tobacco,” Deming said. “Others might see that there could be some benefits to the use of electronic cigarettes for some people who have had some difficulty stopping tobacco use.

“I never recommend e-cigarettes. That’s not our policy. But if a patient comes in and says ‘I’m using an e-cigarette to stop smoking or cut down considerably, where do I go from here,’ I talk about the pros and cons of e-cigarette use.

Deming said some of the pros of e-cigarettes compared to their traditional counterpart is users don’t breathe in carbon monoxide and are exposed to significantly fewer chemicals and chemical concentrations.

The 2014 Surgeon General’s Report on Smoking and Health marked the 50th anniversary of the landmark 1964 report, the first federal government report linking smoking and specific diseases. Coming up with a comprehensive report for e-cigarettes will take time and may prove difficult, especially because so many e-cigarette users are former smokers.

“I think you’re always going to find a negative health effect to breathing in anything but fresh, clean air,” Deming said. “I don’t have any doubt of that. But if it’s the difference between someone using a vapor cigarette or growing up like their mom or dad who smoked, I feel that the health outcomes would be much better without combustible tobacco.

“With the resources we have in this country, I’m wondering why we have yet to drill down and do the necessary research. It seems almost as though something is blocking that research.”

Deming said a lot of clues point to big tobacco.

“I don’t want to sound like a tin-foil hat person, but look at where the money is,” she said. “They have the most to lose. Many of our policies around tobacco haven’t changed a lot.”

Deming said that regulating e-cigarette ingredients and sale to minors makes sense, but said there may be potential for using it as a positive tool.

“The sense of ridiculousness hits me that we’re up in arms about the electronic cigarette but we’re not up in arms about people using combustible tobacco. I was really surprised by the backlash against the electronic cigarette and I thought where is all of this concern for safety when we’re talking about the most dangerous product around and that’s tobacco.”

For manufacturers, the new rules could prove costly enough to annihilate the market. As of Aug. 8, no new vaping products will be allowed into the market and all products released after 2007 will have to go through a costly review process within the next two years.

According to an op-ed authored last month by Boston University public health professor Michael Siegel, “because the FDA considers virtually any change in a product to constitute a new product, this means that the deeming regulations will essentially freeze the vaping market as it exists.”

“By banning new and improved products from the market, the FDA is going to greatly stifle product innovation, thus ensuring that the products that remain on the market are the most hazardous and least effective vaping products possible,” Siegel writes.

“After all, it is through product innovation that the e-cigarette industry would have been able to refine vaping products to make them even more effective for smoking cessation and to reduce their associated health risks to even lower levels than now exist. This is obviously not in the interests of protecting the public’s health.”

Siegel said that the regulations are clearly headed in a direction that supports big tobacco by eliminating competition and with it, the chance for a potentially safer alternative or smoking cessation aid.

“While easily tens of thousands of vaping products will be required to submit onerous, expensive applications estimated to cost no less than $1 million each, what will cigarette manufacturers—like the makers of Marlboro, Camel, Newport, and Kool—have to do? The answer: Nothing.”

Skaggs said that a change was bound to come and his store was already compliant long before the regulations took effect.

Skaggs said he is cautiously optimistic, but the Wild West atmosphere of the industry, with vape shops popping up all over the state, may have hit its high water mark.

New regulations coming down the pike could put an end to fruity and sweet flavors, or require cost prohibitive licenses for retailers.

“By 2018, if the regulations keep going the way they’re going, 99 percent of these products will be gone,” Skaggs said.

students who used e-cigarettes in 2014