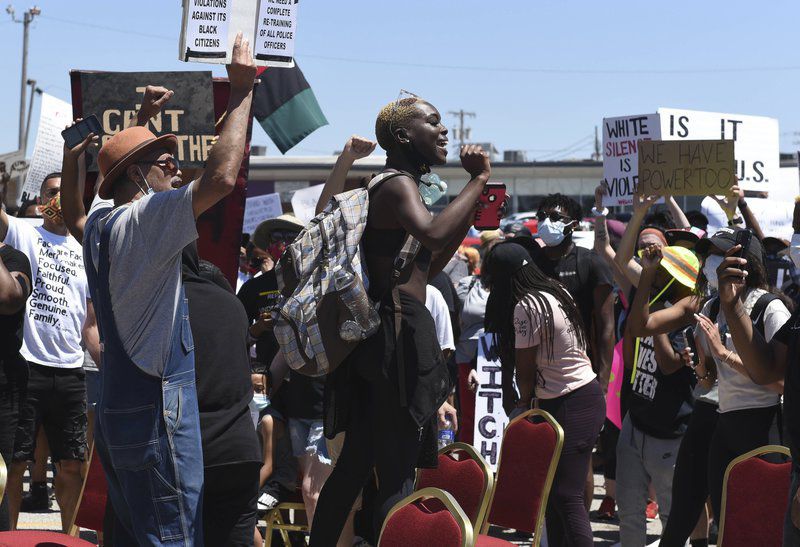 Protesters hold signs during a protest Sunday at the intersection of NW 36th Street and N. Kelley Avenue. 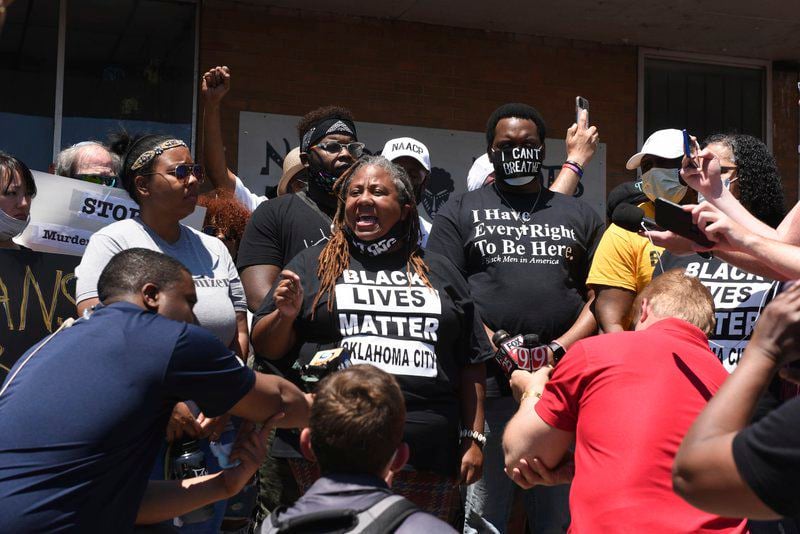 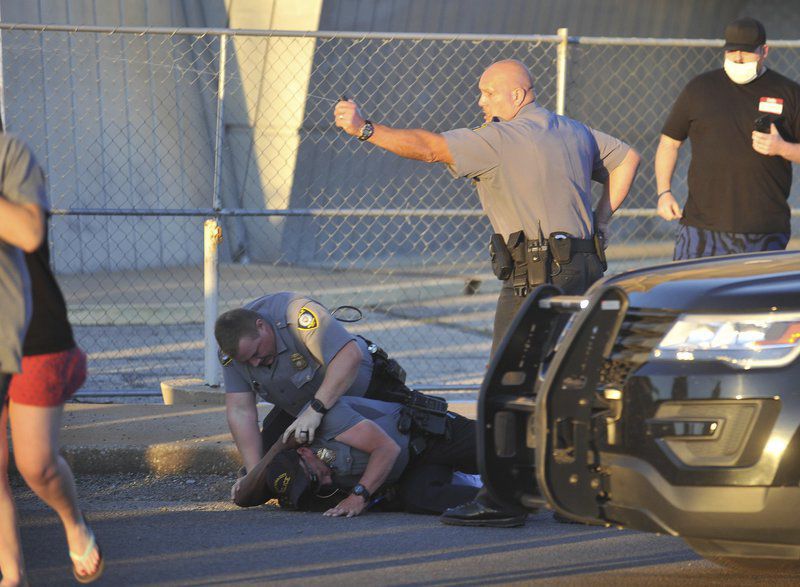 An Oklahoma City Police officer tries to keep protesters back with pepper spray as other officers wrestle a man to the ground Saturday during a protest. 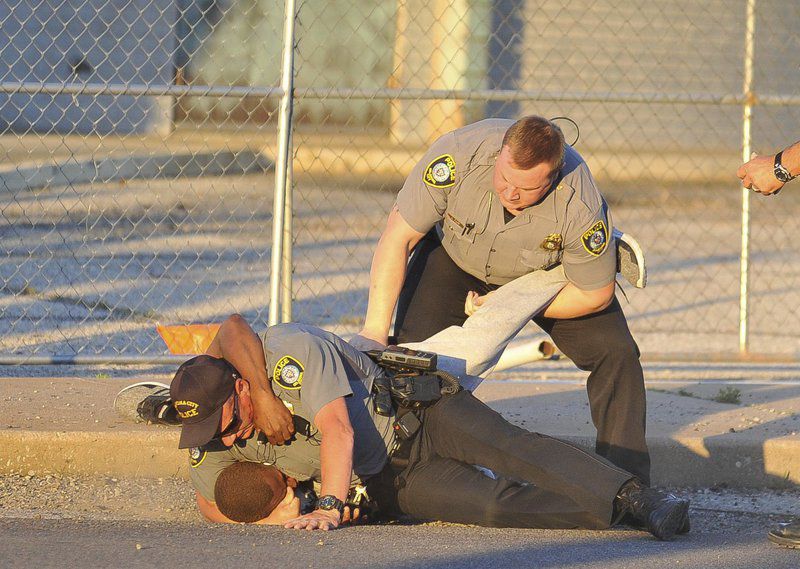 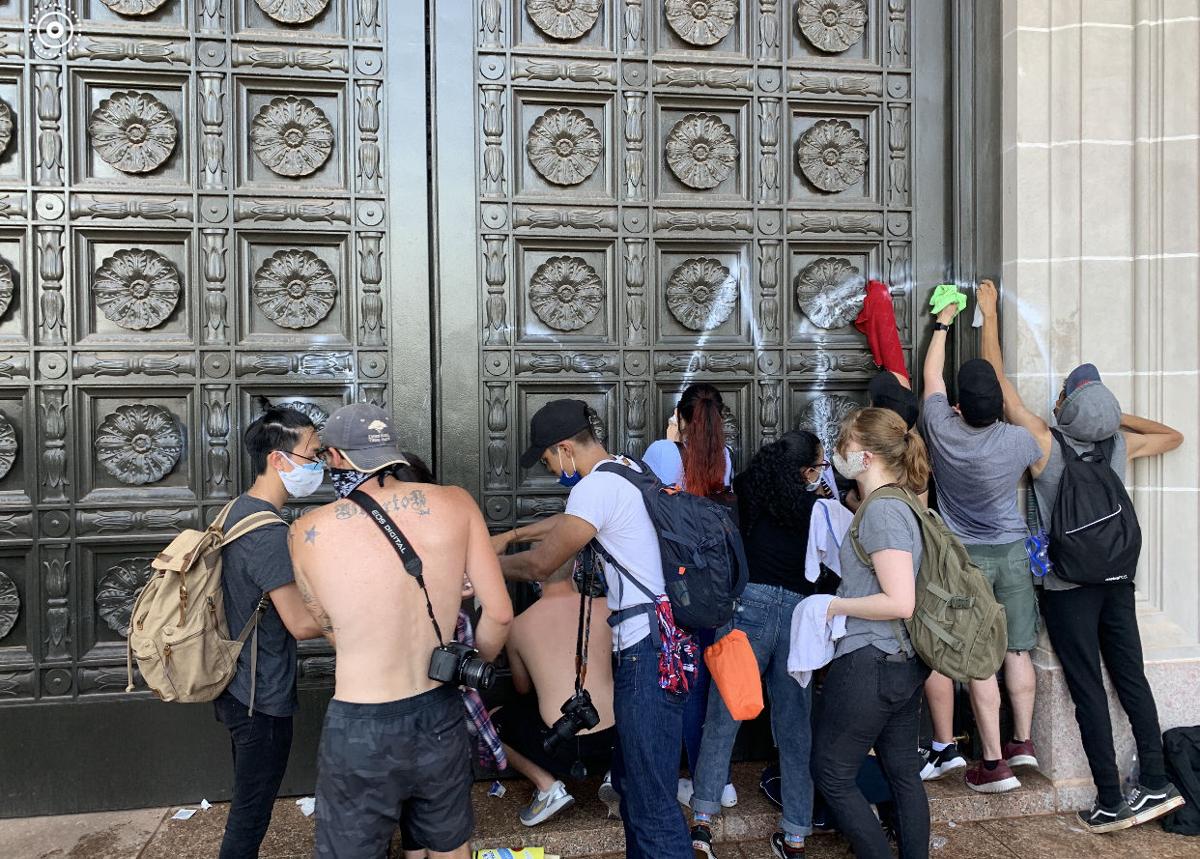 When one young man defaced the door of the Oklahoma Capitol building with the acronym “ACAB,” he was quickly removed by others. Soon after, protesters began taking of their shirts and wetting them to clean off the graffiti on the door.

Protesters hold signs during a protest Sunday at the intersection of NW 36th Street and N. Kelley Avenue.

An Oklahoma City Police officer tries to keep protesters back with pepper spray as other officers wrestle a man to the ground Saturday during a protest.

OKLAHOMA CITY — Black Lives Matter of Oklahoma City joined a diversity of races Sunday to rally against racial injustice and the death of George Floyd under the knee of police officer Derek Chauvin.

The Sunday afternoon protest did not appear to be as violent as the overnight demonstrations in Oklahoma City that experienced fireworks, tear gas and thrown rocks.

With well over 2,000 in attendance Sunday afternoon, Oklahoma City citizens rallied at the Nappy Roots Bookstore, which had speakers and music.

“Today we are here, standing on the fact that we are here to demand justice,” Black Lives Matter Oklahoma City director Sheri Dickerson said. “Not only what inspired this latest surge of outrage about what happened with Mr. Floyd, but to also remember that we have had so many various situations right here in Oklahoma.”

Local community musicians played the drums and sang, and fellow protestors started dancing with one another.

The speakers ranged from pastors of churches in the community, to those personally affected by police brutality.

State and city officials also were in attendance at this rally, which followed an earlier OKC protest that began Saturday and lasted into Sunday morning.

Though many at this rally came from different backgrounds and each had their own story, most shared a unified message.

“We’re here to demand justice,” Norman resident Jess Eddy said. “This oppression has gone on for way to long, and it is time to demand a change.”

After the speakers concluded, protesters made their way up Kelley Avenue, marching to the Oklahoma Capitol building.

Protesters filled the stairs and the lawn in front of the Capitol building. The sidewalk was not visible as the protesters were forced to pack in tight.

The protesters also policed themselves. When one young man defaced the door of the Capitol building with the acronym “ACAB,” he was quickly removed by others. Soon after, protesters began taking of their shirts and wetting them to clean off the graffiti on the door.

They then made their way to the police headquarters, the scene of Saturday night’s turmoil. But today was a different story.

Protesters engaged in civil conversations with the police officers, shaking their hands and getting to know each other personally. The police had water barricades in place separating them from the protesters after what happened last night. The officers would come up to the barricade and shake the hands of the protesters and talk and engage with anybody willing to do so.

Then as the protesters got down onto one knee and began chanting, “take a knee,” some of the police officers that lined the barricade walked up to it and took a knee in solidarity with the protesters.

“We want peace, I don’t hate the police. When we get shot by someone, who we call? The police,” said the protester who started the chant that brought police to their knees. “I just want them to realize the reason I’m scared, because this happens too much and it has to stop.”

Oklahoma Congressman Tom Cole released a statement about the events that have unfolded over the past week.

U.S. Rep. Tom Cole, who represents the 4th Congressional District, said “the reprehensible treatment of George Floyd that resulted in his death is unacceptable” in a released statement.

“There should be and will be a full local, state and federal investigation of the event,” said Cole, R-Moore.

Cole said some legitimate demonstrations have devolved into riots that are unacceptable.

“We must have a constructive national dialogue about the problem of racism and the disparate treatment of citizens by law enforcement based on race,” Cole said. “Both those things are unacceptable, but both clearly continue to occur. That simply has to end. But as we have that discussion, we must not allow those who would resort to violence and destruction to divide us.”

At press time Sunday night, however, the Oklahoma Highway Patrol briefly shut down Interstate 235 near the Sixth Street exit as protesters began blocking both directions of traffic, according to KOCO TV.

As the officers tried to clear them off the interstate, they were met with objects being thrown at them. In consequence, the troopers used tear gas to disperse the protesters.