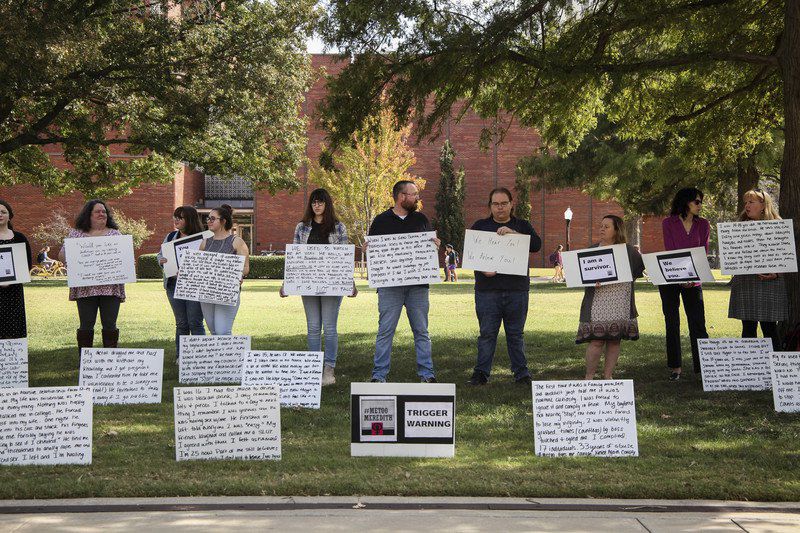 OU students and faculty memberes hold posters with anonymous #MeToo stories on them for the MeToo Sharing Our Stories Demonstration on the South Oval Oct. 15. 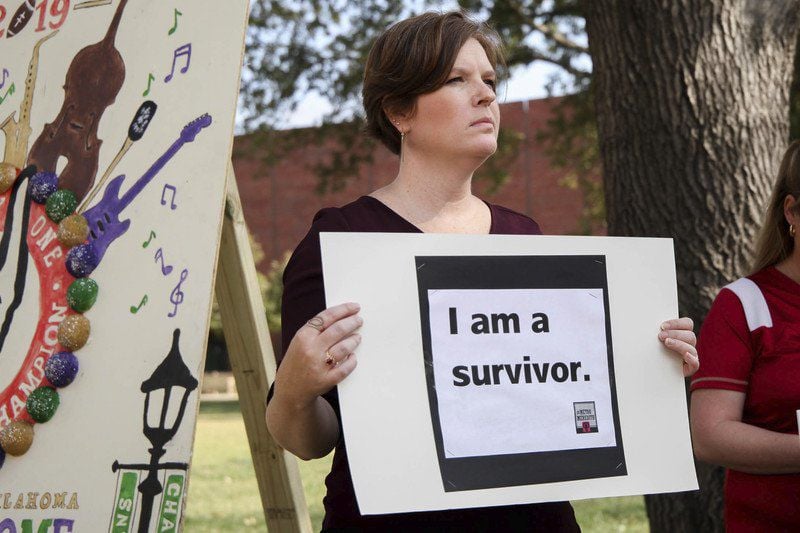 demonstration Tuesday on the University of 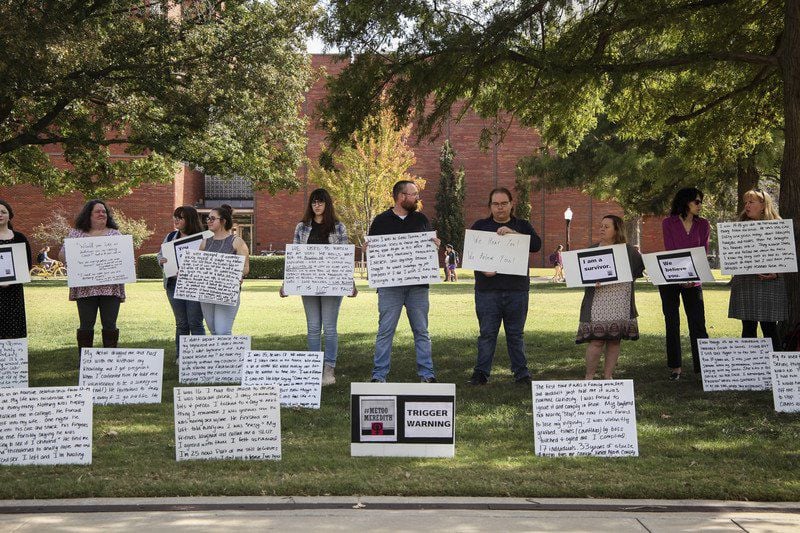 OU students and faculty memberes hold posters with anonymous #MeToo stories on them Tuesday on the South Oval at the University of Oklahoma.

OU students and faculty memberes hold posters with anonymous #MeToo stories on them for the MeToo Sharing Our Stories Demonstration on the South Oval Oct. 15.

demonstration Tuesday on the University of

OU students and faculty memberes hold posters with anonymous #MeToo stories on them Tuesday on the South Oval at the University of Oklahoma.

As the noon flow of OU students leaving and heading to class trickled down the South Oval, a row of white signs stopped many of them in their tracks.

The signs, some driven into the ground and others held by people, told anonymous stories of abuse and assault gathered from the university community and beyond.

Last fall, after Brett Kavanaugh's Supreme Court confirmation hearings, Worthen started the @MeTooMeredith account to uplift anonymous stories of sexual harassment and assault. Worthen said she was inspired by the testimony of Christine Blasey Ford, who in late 2018 accused now-Supreme Court justice Kavanaugh of assaulting her in high school.

On Tuesday, a little more than a year after the Kavanaugh hearings and two years after the #MeToo movement exploded onto social media, Worthen brought the account and its stories to campus. The Me Too movement, started by activist Tarana Burke in 2006, gained traction in 2017 when assault survivors began tweeting their stories after news broke of allegations against Harvey Weinstein.

"I felt like our campus, especially OU itself, has been in the media in some negative ways, and I think if we can show our students that there are people on this campus that care, that there are faculty and grad students...I think it can have a positive cultural shift," Worthen said.

Worthen's account has gained more than 5,000 followers since last fall, with hundreds of story submissions sitting in its inbox at any given time, she said. The sociology professor has already shared more than 800 of those stories in the last year, and still manages the account alone.

During Tuesday's event, Worthen, along with other faculty members and grad students, wrote out 15 of the anonymous accounts on signs, staking some into the ground and holding others.

"I felt like this could be something that was powerful for passersby that are not even engaged in what's going on, but then they're like 'oh my,'" Worthen said. "And then for people who are really aware, to have a platform, (to have) a space where we are all here supporting you."

While some volunteers held anonymous stories or signs with messages like "We believe you," other volunteers, like fourth-year PhD student and international student Rafia Mallick, wrote out their own stories.

"I come from a very conservative Muslim country," Mallick said. "I did share my own story as well, and back home, I wasn't able to raise my voice because I'm a female, and nobody wants to talk about sex or about rape or any of these issues. When I came here, it gave me an opportunity -- especially Meredith's #MeTooMeredith hashtag -- reading those gave me confidence to share my own story."

Tuesday was the first time Mallick has publicly shared her own story of assault. She said the experience was both emotional and "strengthening."

"I wanted to be there in support of people and be there for them… to tell people that you are there, especially women and people of color, people (with) different gender and sexual identities," Mallick said. "It's just sad how we have always been told to shut up and not talk about it."

Worthen partnered the event with OU Advocates, a campus organization that connects assault and harassment survivors with resources and support. Advocates can accompany survivors to doctors' visits or police stations, or help connect them with expedited visits to the University Counseling Center.

The event stopped passing students, who paused to read the detailed stories and snap pictures. Some, like OU senior Jade Medeiros, picked up a Sharpie and made their own signs.

Medeiros, a former student of Worthen's, said humanizing stories of assault and harassment helps students grapple with the reality and prevalence of sexual violence on campus. The number of rapes reported at OU's Norman campus has more than doubled over the last few years, with a jump from 20 reported rapes in 2016 to 41 in 2018, according to this year's Sooner Safety and Fire report.

"Not only am I a victim myself, but I know more people that have been assaulted than I do that have not, and that's a problem," Medeirdos said. "...Campus rape is prevalent more than it is not. The fact that we have to put banners around campus that say Halloween costumes are not consent should be more of a shame than it is a prevention method. So I think that putting up actual stories is forcing people on campus to not just keep walking by."

Worthen hopes to hold an annual #MeTooMeredith event, she said, and will keep operating the Instagram account alone. The platform that the event and account continue to offer survivors a way to understand and process their experiences in a safe space, Medeiros said.

"I think that Meredith (Worthen) is providing the platform for people who feel like no one will listen, or who don't want to admit it to themselves, or talk about it, or aren't ready to," Medeiros said. "It's giving them a form of anonymity, that they can still vent and get it out without repercussions."