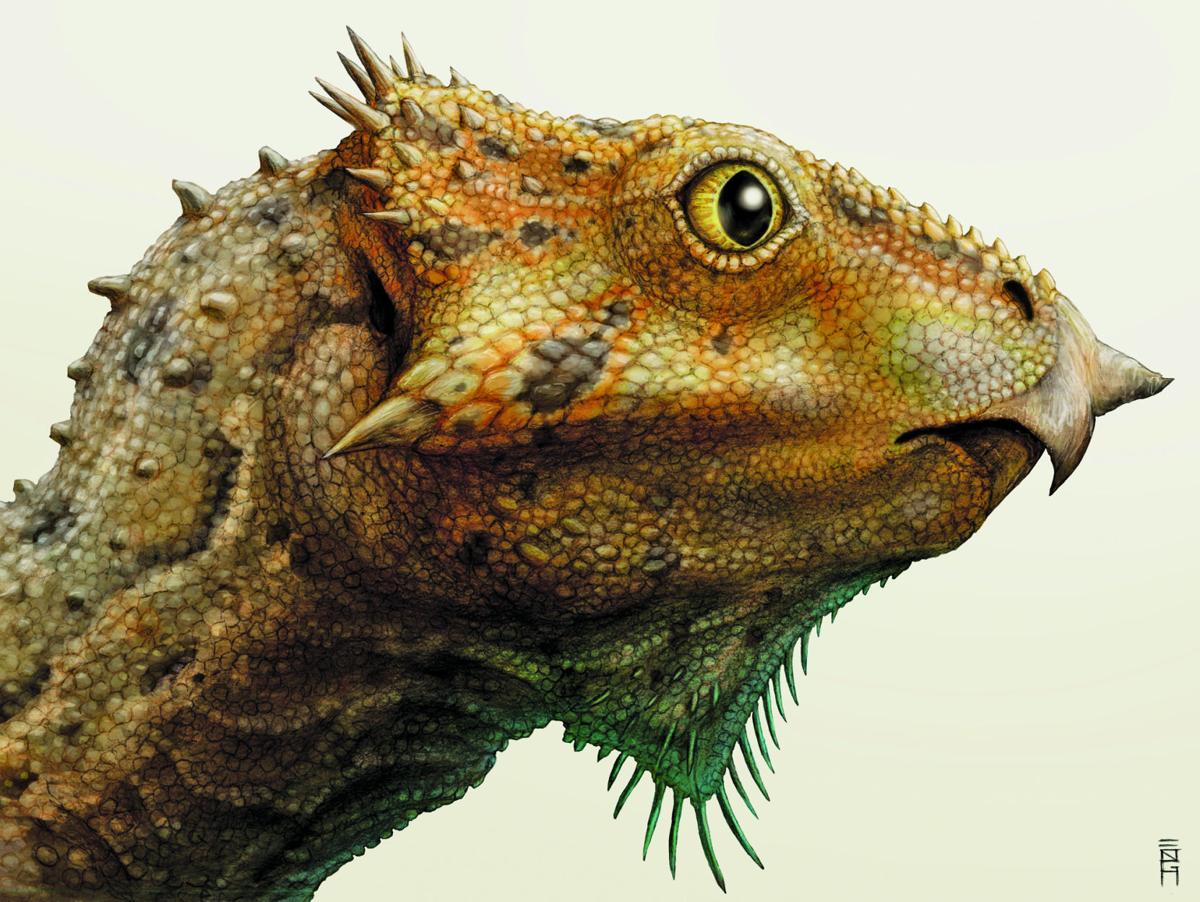 This digital rendering shows that Aquilops americanus may have looked like. 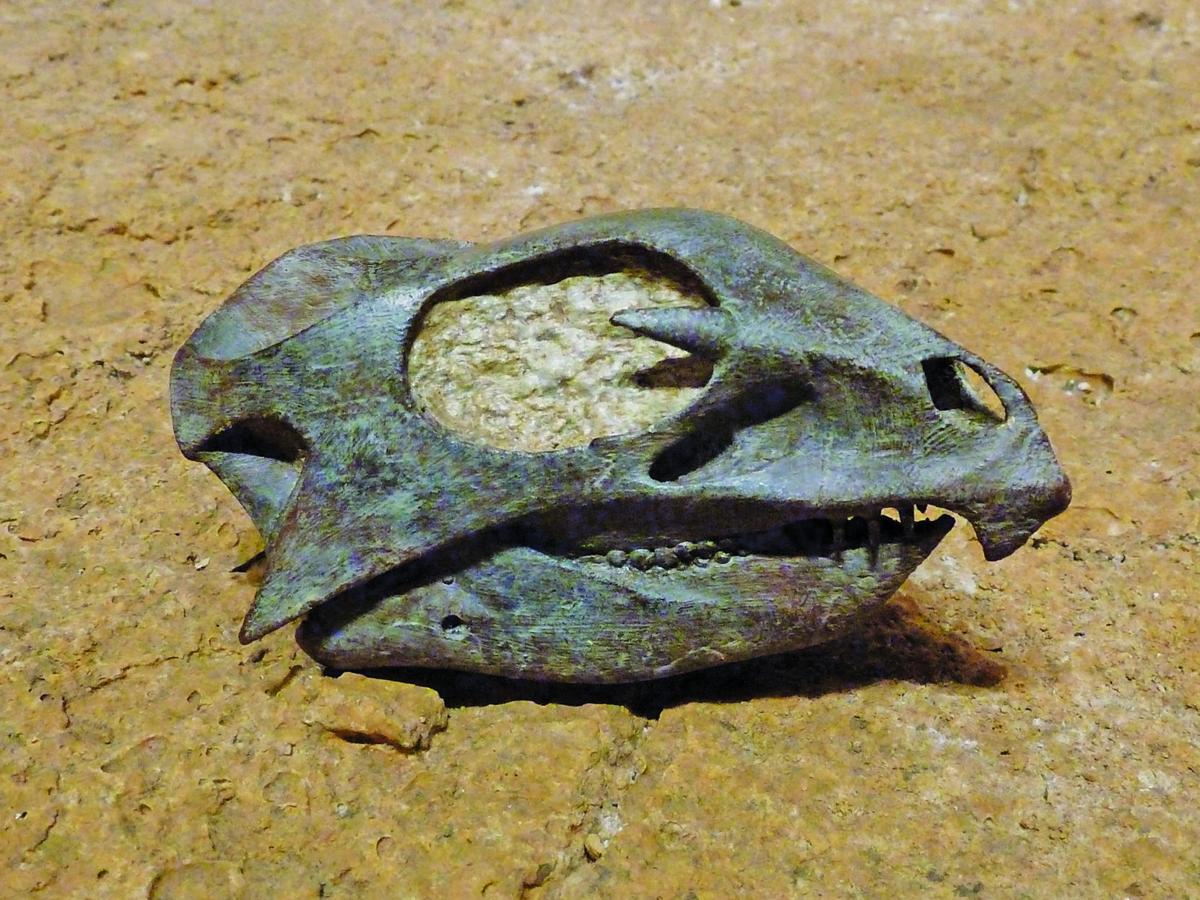 This Aquilops americanus skull replica will be on display at the Sam Noble Museum of Natural History. 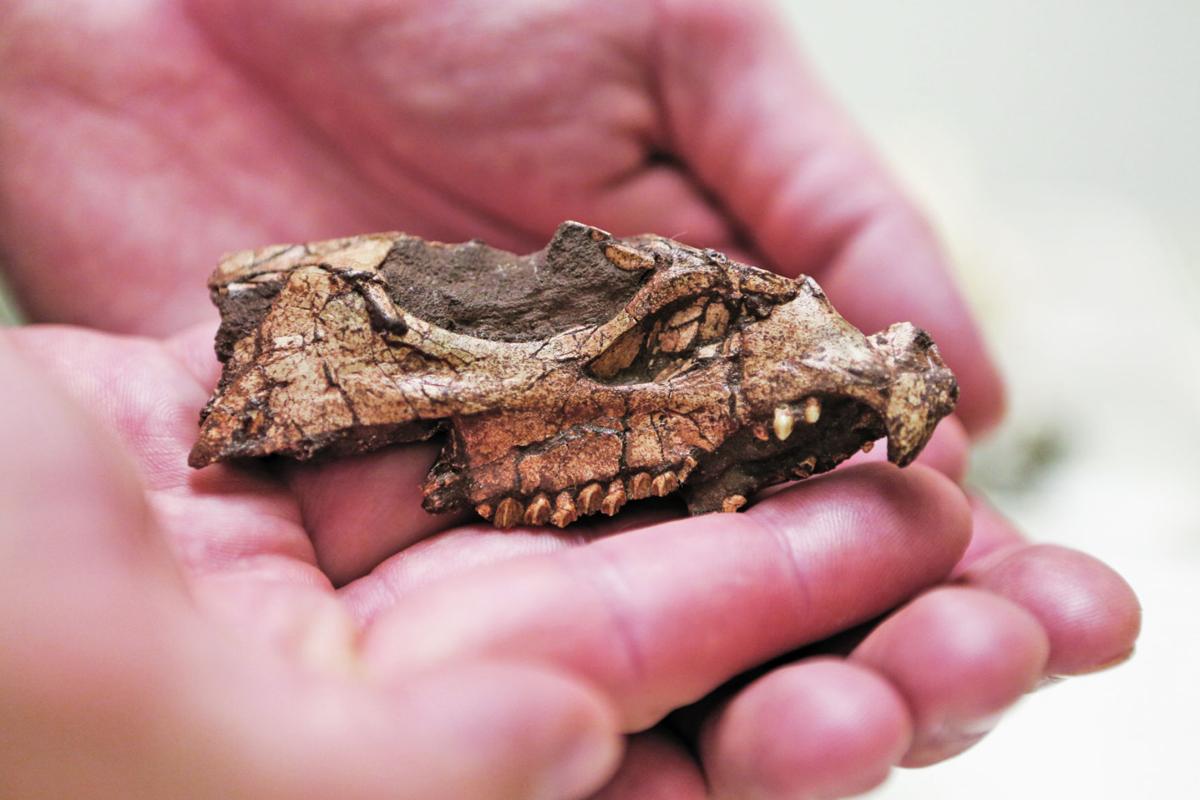 This Aquilops americanus skull will be on display at the Sam Noble Museum of Natural History.

This digital rendering shows that Aquilops americanus may have looked like.

This Aquilops americanus skull replica will be on display at the Sam Noble Museum of Natural History.

This Aquilops americanus skull will be on display at the Sam Noble Museum of Natural History.

A 108-million-year-old fossil skull — the oldest member of the horned dinosaur lineage yet known from North America — has been unearthed and identified as a new species of dinosaur by a team of paleontologists from Oklahoma and California.

Funded by a National Geographic Society Committee for Research and Exploration grant, paleontology curator of the Sam Noble Oklahoma Museum of Natural History Rich Cifelli and three museum research associates have published their findings in the Dec. 10 issue of the scientific journal PLOS ONE.

The lead author of the study is Andrew Farke, a paleontologist from the Raymond M. Alf Museum of Paleontology in Claremont, California, and a specialist on horned dinosaurs.

“We were excited that it looked like a skull of a small plant-eating dinosaur, but we assumed that it belonged to a species already known,” Cifelli said. “We didn’t realize right away what a big discovery we had made.”

With a limited fossil record, paleontologists have previously struggled to reconstruct the evolutionary history of the Ceratopsia, popularly known as “horned dinosaurs,” in North America. The new species is represented by a skull, which is about the size of a lemon, and provides important new information on vertebrate history during the latter part of the age of dinosaurs.

The scientific name of the new ceratopsian is Aquilops americanus or “American eagle face,” which is a hybrid from two classical languages: “Aquila,” Latin, meaning eagle; and “ops,” Greek, meaning face. The new species dates to approximately 108 million years ago, 20 million years older than any other named ceratopsian species from North America.

Aquilops is recognized as a ceratopsian by its spike-like cheekbones and distinct upper beak bone, which Farke characterizes as a “ceratopsian membership card.” But it differs from typical forms, such as Triceratops and kin, in lacking facial horns and a long frill extending over the neck.

Roughly the size of a small cat, Aquilops is estimated to have been 2 feet long and to have weighed a mere 3 pounds—another point of contrast with its truck-sized relatives. Experts suggest that Aquilops and other small plant-eating dinosaurs may have lived in or near forest habitats, using camouflage to avoid being detected by large predators.

The fossil record suggests that horned dinosaurs arose in Asia and dispersed to North America by about 108 million years ago, the age of Aquilops. Surprisingly, however, the study by Farke and colleagues places Aquilops near the base of the ceratopsian family tree, far removed from horn-bearing Triceratops and other North American relatives.

Relationships among there upper branches of the genealogical tree suggest that two or more immigration events happened later in the Cretaceous.

“Life on land underwent profound changes during the latter part of the age of dinosaurs. This new find supports the view that migration events were fundamental in driving those changes,” Farke said. “Aquilops represents just one of many groups that made the trek from Asia to North America.”

Paleontologist Scott Madsen, a member of Cifelli’s field team, first unearthed the skull of Aquilops in 1997, and spent countless hours painstakingly removing it from surrounding rock. The fossil hails from the brightly colored Cloverly Formation of southern Montana.

“This is a special project for all of us because we only have one skull,” said Mathew J. Wedel, a paleontologist at the Western University of Health Sciences and a co-author of the study. “I hope more come to light in the future, but for now this is it so we really want to nail it, do this right the first time.”

The discovery provides new information on the evolutionary history and migratory patterns of one of the most successful of all dinosaur groups.

“It would appear,” Cifelli said, “that immigration to North America is not limited to historic times, but is a pervasive theme through Earth history, driving change to both past and present communities.”

The skull of Aquilops will be stored in the vertebrate paleontology collection at the Sam Noble Oklahoma Museum of Natural History in Norman. It will be the nucleus for development of an in-house virtual exhibit to go on exhibit in 2015 in the museum’s Hall of Ancient Life alongside the museum’s Pentaceratops, which holds the Guinness World Record for being the largest dinosaur skull ever found.

Articles appearing on the Transcript front page on Dec. 10, 2014.

Lawrence "Larry" Joseph Enouen, 62 of Norman, passed away on November 28th. Graveside services will be held at Norman IOOF Cemetery on December 10th at 10:00 am. Arrangements are under the direction of Primrose Funeral Service.