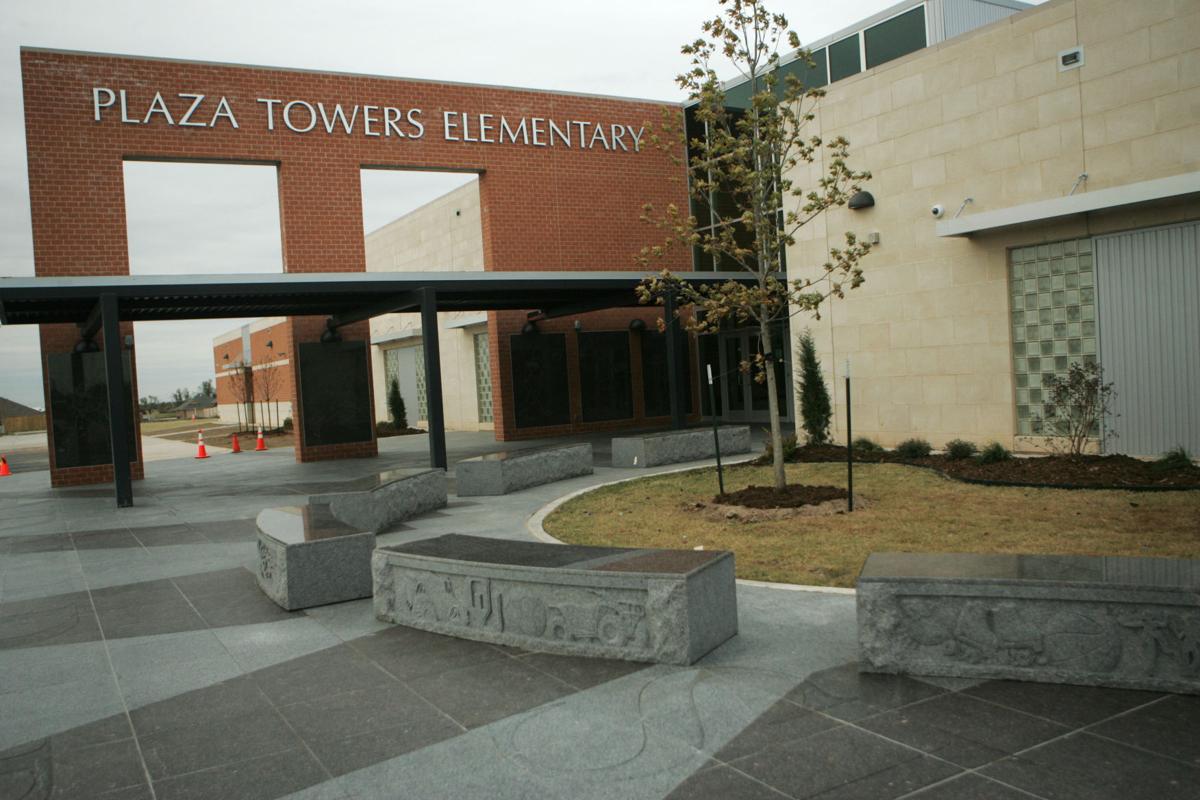 Seven stone benches and seven larger than life drawings in granite honor the children who died at Plaza Towers Elementary during the May 20, 2013 tornado at the entrance to the rebuilt school in Oklahoma City Thursday, Nov. 13, 2014. Jay Chilton / The Transcript 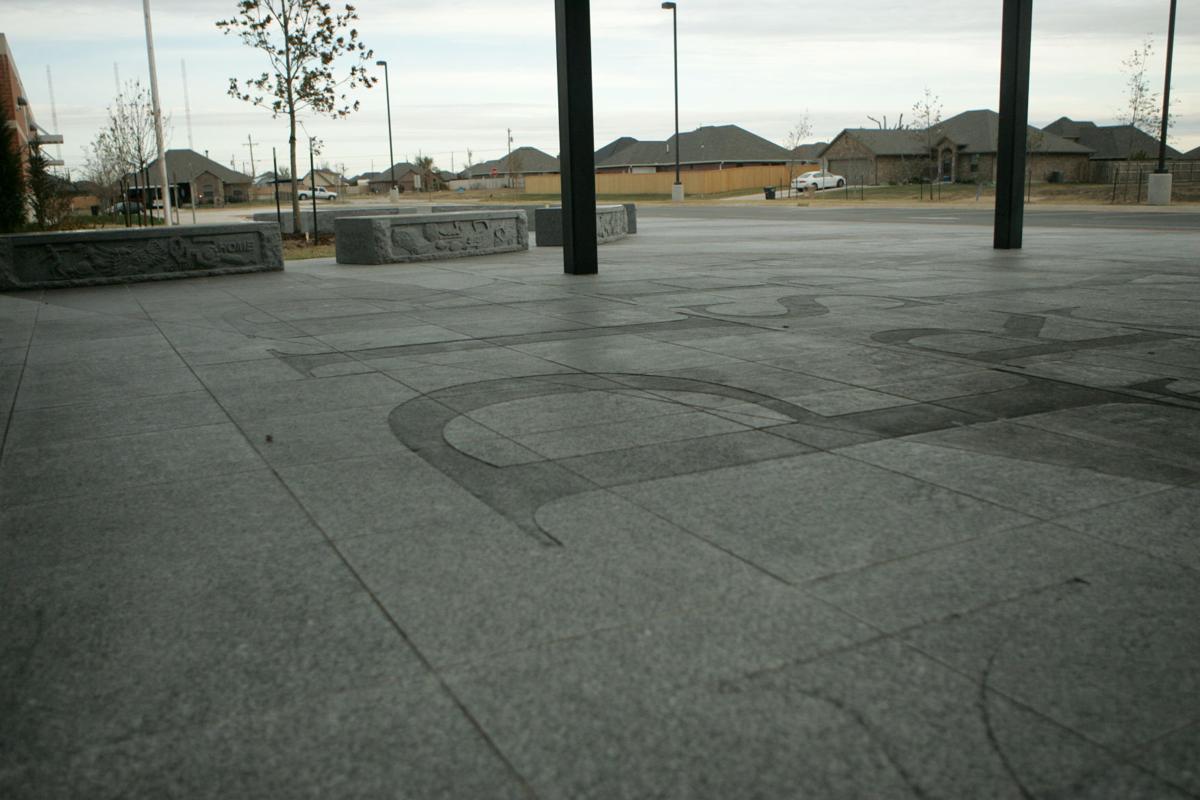 Seven stone benches and various inspirational words carved in granite paving tiles honor the children who died at Plaza Towers Elementary during the May 20, 2013 tornado at the entrance to the rebuilt school in Oklahoma City Thursday, Nov. 13, 2014. Jay Chilton / The Transcript 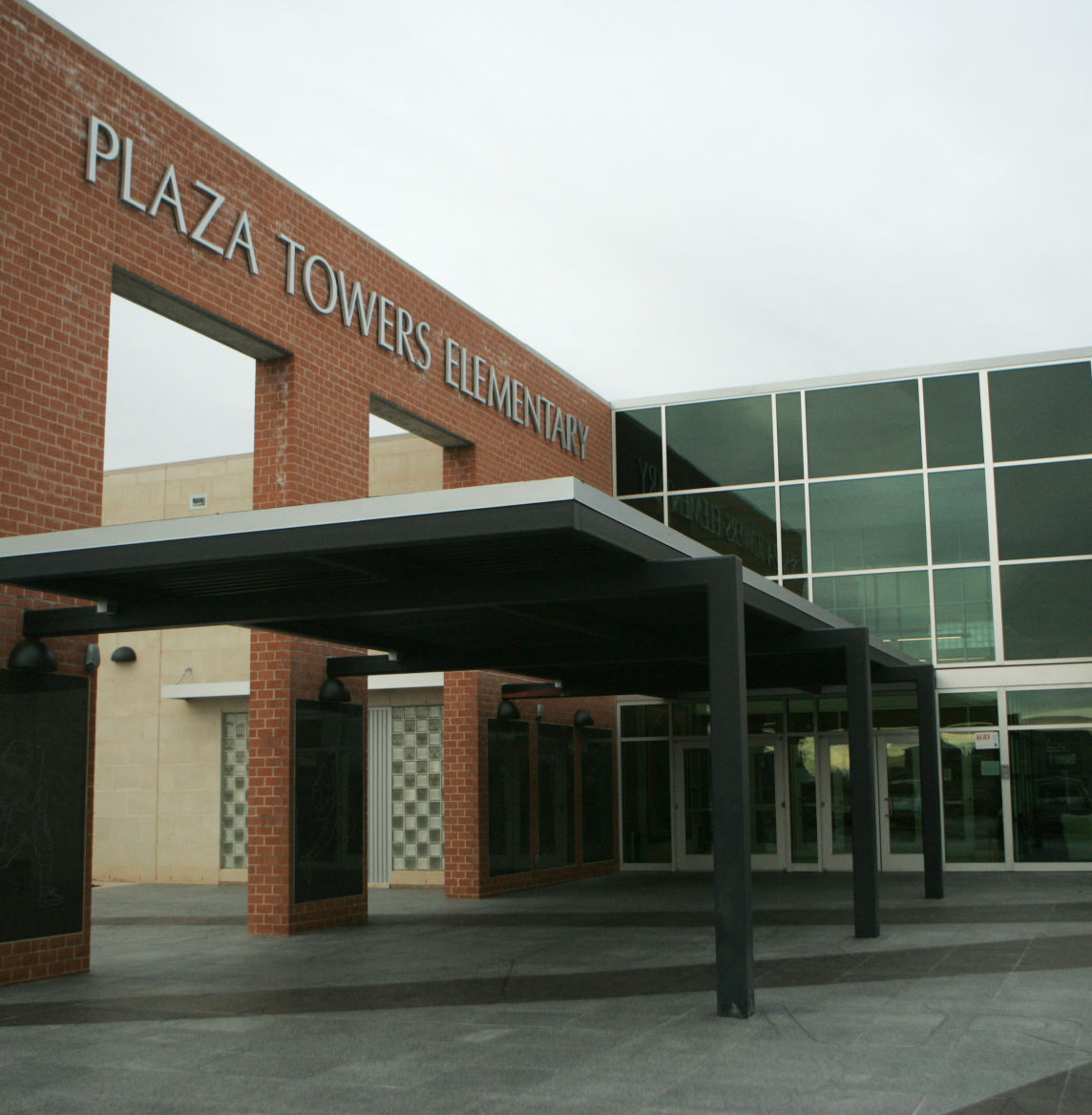 A stone memorial honors the children who died at Plaza Towers Elementary during the May 20, 2013 tornado at the entrance to the rebuilt school in Oklahoma City Thursday, Nov. 13, 2014. Jay Chilton / The Transcript

Seven stone benches and seven larger than life drawings in granite honor the children who died at Plaza Towers Elementary during the May 20, 2013 tornado at the entrance to the rebuilt school in Oklahoma City Thursday, Nov. 13, 2014. Jay Chilton / The Transcript

Seven stone benches and various inspirational words carved in granite paving tiles honor the children who died at Plaza Towers Elementary during the May 20, 2013 tornado at the entrance to the rebuilt school in Oklahoma City Thursday, Nov. 13, 2014. Jay Chilton / The Transcript

A stone memorial honors the children who died at Plaza Towers Elementary during the May 20, 2013 tornado at the entrance to the rebuilt school in Oklahoma City Thursday, Nov. 13, 2014. Jay Chilton / The Transcript

Seven bright, interesting and special children who lost their lives May 20, 2013, in an EF-5 tornado will always be remembered by their family and friends. Now with the completion of the Plaza Towers 7 Memorial, Kyle Davis, JaNae Hornsby, Antonia Candelaria, Emily Conatzer, Sydney Angle, Nicholas McCabe and Christopher Legg also will always be remembered by their community, country and the world.

Many months of planning culminated on Nov. 3 as Marcum’s Nursery planted trees and greenery and Plaza Towers 7 Memorial transformed from a construction site into a special place representing the resilience of Plaza Towers Elementary. Now complete, a dedication ceremony at the memorial honoring the seven children and their families will be at 5:30 p.m. Monday.

“You can’t stand in the midst of it and not be moved,” said Chad Vice, Norman Public Schools Board of Education member. “This memorial was the efforts of a community, of Oklahomans and of a nation, really of a world. …The dedication will be a very personal moment for these families, but we don’t want to exclude the hearts and minds of those that made it happen, so there is a delicate balance. If it wasn’t for the generosity of all, we wouldn’t be here, and it’s important to us to honor that too.”

Vice has been working on the memorial since its inception, and said the design of the memorial came to life after a private meeting with the families of the seven children. The design is also in keeping with the purpose and needs of an elementary school. Vice explained that the design paves the way for the future and is not solely about loss.

The memorial is located at the newly rebuilt Plaza Towers Elementary School, which is at the same site as the original school, 852 SW 11th St. The memorial is at the entrance of the school, on the East side of the building, and as the sun rises, it welcomes students like a beacon of hope.

The memorial design incorporates five key elements. The first element is seven solid granite benches with the names of each student and a special object carved into the benches symbolizing the individuality of each child. Antonia Candelaria's bench has carvings of fairies because she always liked whimsical things, and Nicholas McCabe's bench will have a corvette because he worked on corvettes with his dad. Sydney Angle's bench will incorporate the letters "OU" and a softball for her love of the sport and University of Oklahoma softball team.

Second, a large shade tree is planted in the lawn next to the benches to provide shade for those seated in the area. Next, the memorial is paved with thick granite slabs in two colors, gray and mahogany. The mahogany granite will form seven rays of sun, a symbol of happiness that each child brought to the school, their family, friends and community.

Inspirational messages create the fourth element of the memorial. Including the words dance, learn, inspire, laugh, friendship and dream to encompass  the spirit of the seven children, while staying perfectly aligned with the purpose of an elementary school.

“One thing we wanted to do is not only honor what was taken but it's a school where school age children are laughing, skipping, doing what kids do, and we wanted the memorial in keeping with those school children. It's fun to sit back and watch the kids trace out the letters on the plaza and see that interaction and engagement,” Vice said. "That's exactly what we wanted, and I'm pleased to say we accomplished it."

Lastly, seven silhouettes of children (three boys and four girls) are engraved onto plaques on the wall of the school entrance as if they were running, walking or skipping. Each silhouette will include a personal effect that will represent items special to the children’s lives.

Now that the memorial is complete, Vice said all of the seven children's parents had visited the memorial.

“It’s a hard thing to say you’re happy or pleased with. The goal there was to provide them with a level of comfort, that no other place could just because that’s the soil where there kids died. It’s holy ground now,” Vice said. “On this earth, this place is the closest they can get to their child.”

Vice said he hoped the memorial would envelope the parents in peace and allow healing to take place.

“One of the moms said to me, ‘I cannot wait to go in there at night, in the stillness of the night, and sit on my son’s bench and think about him and take him in.’

Funding for the memorial has come from private donations and grants. Vice said to be 100 percent funded the memorial still needs to raise $40,000. The project cost a total of $200,000.

“Some grants came through and some didn’t. Our original goal was $180,000 based on projected costs. Now that the memorial is in and done, some things were underestimated and others were overestimated and the new goal is $200,000,” Vice explained. “We’ve received a lot of grants. We have been blessed. Sometimes what you apply for isn’t exactly what you get, and that’s why we wanted to make sure exactly what our need was, so when I looked someone in the eye and said we needed help, it was true.”

To donate, visit plazatowers7.org or any Republic Bank & Trust location. All funding will be administered by the Moore Public Schools Foundation, a 501 (c)(3). Donations are tax deductible.

For more information about the Plaza Towers 7 Memorial or to donate, visit plazatowers7.org. 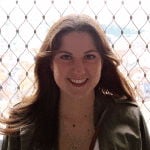 Hello! I am The Norman Transcript's education beat reporter. I write about the ongoings of the University of Oklahoma and Norman Public Schools. I love my job and immersing myself in any educational environment.

Deyrl Gene Kastner (78) of Noble, passed away on December 1, 2020 at the Norman Regional Healthplex. Services will be 11:00 am Saturday, December 5, 2020 at the Noble IOOF Cemetery. Directed by McMahans Funeral Home of Noble.

Sarah passed away peacefully in her sleep on December 1. We'll miss her terribly and are thankful for the light she brought to all of our lives. Memorial services will be arranged in the future.