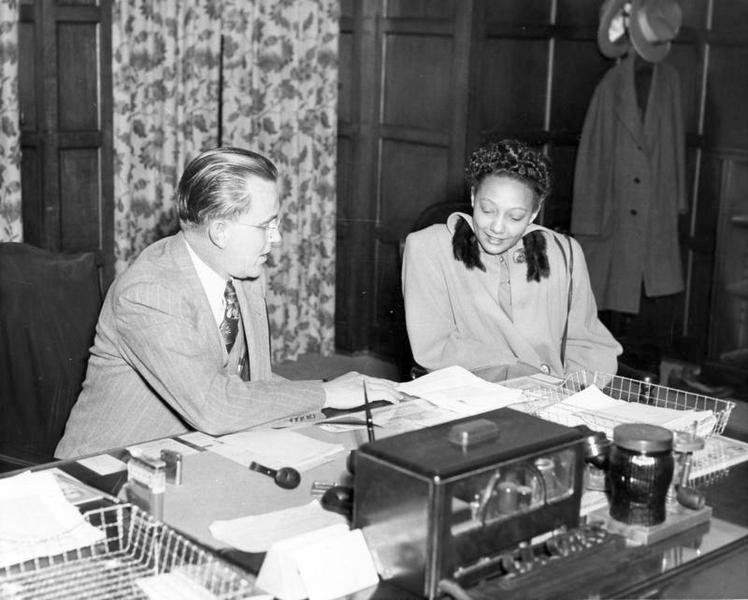 Ada Sipuel Fisher sued the state of Oklahoma after OU refused to admit her to law school. Here she is waiting for the trial to restart. Thurgood Marshall, later a U.S. Supreme Court Justice, represented Fisher, then Ada Sipuel, for the NAACP. In 1992, Oklahoma Gov. David Walters appointed her to the OU Board of Regents, more than four decades after she initially was refused admission to OU due to her race. 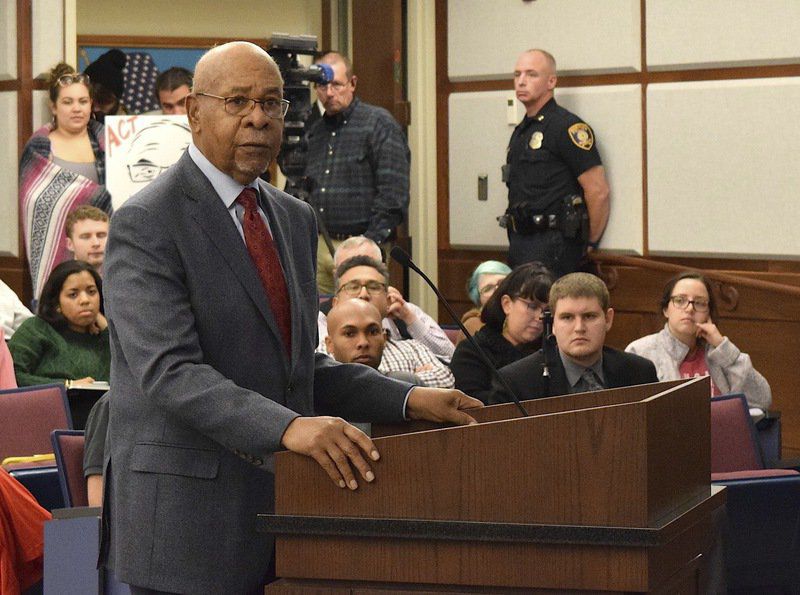 OU professor George Henderson talks at a Norman city council meeting last year. Henderson, who was one of the first black faculty members at OU, talked about the importance of other local civil rights trailblazers and how the next generation can move us forward.

Ada Sipuel Fisher sued the state of Oklahoma after OU refused to admit her to law school. Here she is waiting for the trial to restart. Thurgood Marshall, later a U.S. Supreme Court Justice, represented Fisher, then Ada Sipuel, for the NAACP. In 1992, Oklahoma Gov. David Walters appointed her to the OU Board of Regents, more than four decades after she initially was refused admission to OU due to her race.

OU professor George Henderson talks at a Norman city council meeting last year. Henderson, who was one of the first black faculty members at OU, talked about the importance of other local civil rights trailblazers and how the next generation can move us forward.

Dr. George Henderson “retired” in 2006, but when you listen to the long list of classes he teaches and organizations he’s involved with, it’s easy to understand why his wife, Barbara, has said he should probably stop using that word.

“The only difference now is, I get to decide what to fill my days with,” he said with a chuckle.

The long-time OU professor has been in Norman since 1967. As one of the first black faculty members at the University of Oklahoma, who moved to Norman when the city was still a “sundown town,” Henderson’s experience with personal and systemic racism stretches back decades. While some things have changed over the past 50 years, race and racism still dominant local, state and national conversations and politics. Moving our society forward, Henderson said, has never been easy.

“It’s been a lifetime of hard work,” he said. “I spent more time with other people’s children than my own, with the blessing of my wife and children. It takes time to engage people. It’s hard work.

“It’s easier for me to call you a racist than to get to know you and understand you.”

Henderson said the progress made by trailblazers like Ada Lois Sipuel Fisher and George McLaurin is evident in the very fact that Henderson has been at OU for five decades and Norman is no longer a sundown town. But he added that black history is American history, and Normanites of all races have contributed to local civil rights.

“Compromise is not a dirty word,” he said. “When you’re trying to bring about change, you ask for the most you could want, and then you have to be willing to compromise. You can’t be surprised when people push back — those in power never want to willingly give up power. You have to engage them, you have to find allies and find a way to express yourself.”

Henderson said it’s important for the next generation of black Normanites to be engaged on a civic level.

“If you don’t have a presence, you don’t have a voice,” he said. “For those of us with a modicum of influence and status, we need to bring the next generation into the community and organizations. It’s important for us to approach this with dignity and respect. Don’t be victims, and don’t be oppressors.”

• Ada Lois Sipuel Fisher 1924-1995: In 1946, Fisher applied to the University of Oklahoma law school. A protracted legal battle ensued, until in 1948 the United State Supreme Court ruled that the state had to provide equal education for African American students. To comply, OU established the Langston University School of Law in OKC, but Fisher sued again, saying that the Langston law school was inferior to that at OU. In 1949, Fisher was admitted to OU, the first black woman to attend an all white law school in the south.

She was forced to eat in a separate are of the law school, chained off from other students, although Fisher later recounted white student sneaking into the area to eat lunch with her when guards were not looking.

“I will spend the rest of my life trying to prove to Oklahoma that a mistake was made in the attempt to keep me from entering the school,” Fisher told the Transcript back in 1949.

She graduated with a Master’s degree in 1951 and shortly afterward began practicing law in Chickasha, her hometown.

In 1992, Oklahoma Gov. David Walters appointed her to the OU Board of Regents, more than four decades after she initially was refused admission to OU due to her race.

A memorial, the Ada Lois Sipuel Fisher Garden, sits on the north end of the OU campus.

• George W. McLaurin 1887-1968: Fisher wasn’t the first black student to attend OU, though. McLaurin, like Fisher, was the subject of a Supreme Court decision that changed how black students were treated nation-wide.

In 1948, at the age of 61, McLaurin was denied entry to a doctorate program at OU. He sued the board of regents, and OU was ordered to admit him. In keeping with segregation practices, OU President George Cross arranged for McLaurin to sit away from white students while attending classes, and special segregated seating areas were established on campus. McLaurin sued the board of regents in 1950, arguing the conditions of the “separate but equal” practices deprived him of a truly equal education. Famous civil rights attorney Thurgood Marshall argued on McLaurin’s behalf. On June 5, 1950, the Supreme Court ruled that a public institution of higher learning could not provide different treatment to a student based on their race, because it violated their 14th Amendment rights. The case was instrumental in ending the “separate but equal” doctrine.

• Prentice Gautt 1938-2005: While black students began attending OU in 1948, it wasn’t until 1956 that the color barrier was broken on the Sooner football team. Recruited from Douglass High School in OKC by Sooner head coach Bud Wilkinson, Gautt was a two time All-Big Eight player and the MVP of the 1959 Orange Bowl. He scored on a 42-yard touchdown run, leading Oklahoma to a 21-6 victory over Syracuse.

Gautt had to deal with prejudice from the start, when Wilkinson was pressured away from giving him a scholarship. The cost of his education was paid for by black professionals, and by the end of the year he had a scholarship, which he donated to another student. Some restaurants and hotels would not serve Gautt when he traveled with the football team.

He went on to play in the NFL for seven seasons

“We are very proud that the academic center at the athletics department of the University of Oklahoma bears his name,” OU President David Boren said when Gautt died in 2005. “I will never forget the day that he stood on the 50-yard line of Owen Field and received the longest ovation I have ever witnessed in the stadium when it was announced that the academic center would be named for him.”

• Etta and Don Johnson: The same year Gautt began playing for OU, Etta Johnson was the first African American student to integrate Norman Public Schools. Her brother, Don, shortly followed her. Norman was still a “sundown town,” at the time, which meant it was illegal for blacks to remain in the city limits after dark.

Etta was a member of the Gingersnaps Pep Club, and Don was involved in FFA. and was the first African American graduate of Norman High School in 1958. Don graduated in 1959. Here’s more information from Normanite Wallace Collins, who was in the same class as Don at NHS.

“Don was a very good football player and had scholarship offers from various universities.  However, an injury in his senior year ended that promise. Don went to work for Bob Sawyer, owner of Bob’s Seat Covers, then in business on East Gray Street, where the Gray Owl currently is. Later, they moved to the location on North Flood, and upon Bob’s retirement, Don bought the business, becoming one of Norman’s first black-owned businesses.”