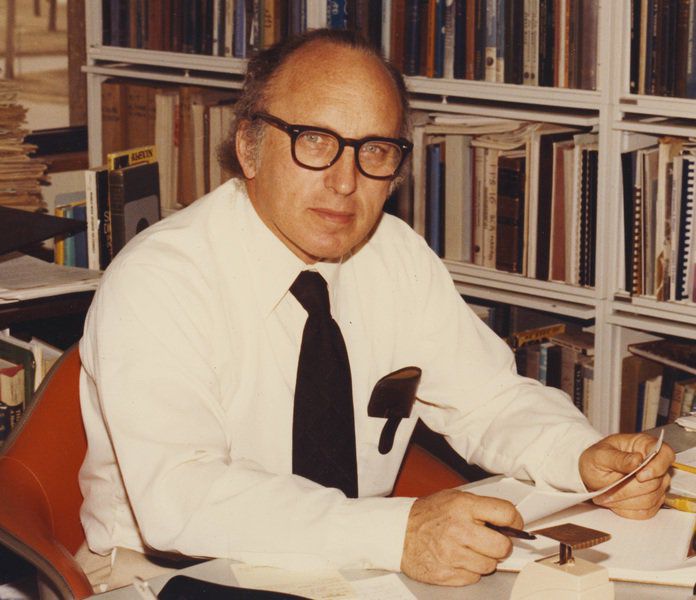 Edwin Kessler moved to Norman, where he served as the first director of the National Severe Storms Laboratory of the National Oceanic and Atmospheric Administration until he retired in June 1986. 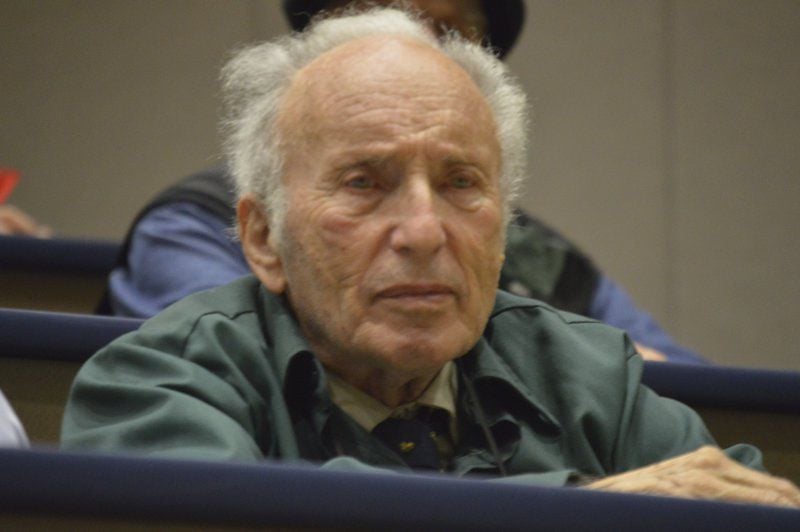 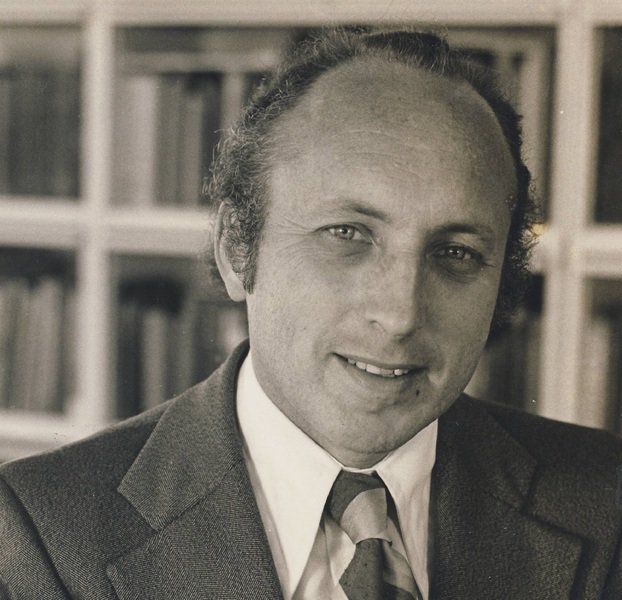 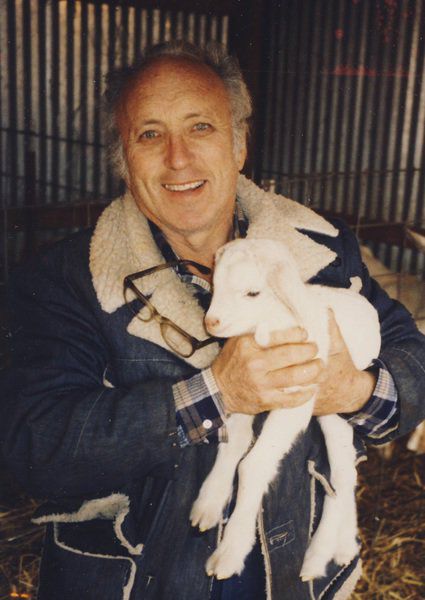 Edwin Kessler poses with a goat. Kessler and wife Lottie lived on a farm west of Purcell and raised organic vegetables for many years.

Edwin Kessler moved to Norman, where he served as the first director of the National Severe Storms Laboratory of the National Oceanic and Atmospheric Administration until he retired in June 1986.

NORMAN — Norman will soon say a final goodbye to a visionary scientist, mentor and friend who helped put the city on the map through his contributions at the National Severe Storms Laboratory.

Kessler moved to Norman in 1964 and was the first director of the National Severe Storms Laboratory of the National Oceanic and Atmospheric Administration. Also an affiliate professor of meteorology at the University of Oklahoma until his retirement in 1986, he led the NSSL team as Doppler radar research led to NEXRAD, an advanced type of Doppler radar.

Kessler’s beloved wife, Lottie, died in 2011. For a time, Lottie was a dessert chef at Legend’s Restaurant in Norman.

“I’ve known Ed ever since I was a graduate student at MIT in the mid 1970s,” said Howie Bluestein, University of Oklahoma professor of meteorology. “He was on sabbatical one year and his office was next door to mine. Although my area of research was in tropical weather and not in severe storms, he saw I had a strong interest in severe storms.”

“He was a true intellectual,” Bluestein said. “He had the vision to become the first director of the severe storms lab and the vision of developing Doppler radar and using it to study severe storms and to develop this radar so it could be used for warnings.”

The Kessler Microphysics Scheme, which models the formation of rain, is still used today, Bluestein said.

“He was also very politically active and had other interests,” Bluestein said. “He had a farm and organically grew food and took care of cattle. In a real sense, he was very connected to Oklahoma, even though he is not originally from here.”

One of Bluestein’s most poignant memories was a dinner at Bluestein’s home about a decade ago. From their days at MIT, Bluestein had become friends with Kessler and Ed Lorenz, the meteorologist who tried to predict weather with computers and, instead, ended up identifying what would become chaos theory.

Lorenz and Kessler had been colleagues and knew each other long before Kessler was dubbed the “father of Doppler” or Lorenz the “father of chaos theory.” Bluestein said the dinner conversation between the two that evening was unforgettable.

“I wish I could have videotaped it,” he said.

Jeff Kimpel was a professor at OU during the time Kessler was NSSL director.

“Ed really helped me get started in my research career when I came in 1973,” Kimpel said. “The first research grant I ever got, I got from NSSL-NOAA, thanks to Ed.”

Kimpel would go on to become the third director of NSSL, and he attributes Kessler with helping create the unique partnership between government, academia and private industry that marks Norman’s weather network.

“I think his real contribution was he really contributed to understanding severe storms from a scientific perspective,” Kimpel said. “He’s also the guy that created weather Doppler radar research and development that led to the establishment of a national network of NEXRAD radars.

“The other thing he did, he worked with other people at the University of Oklahoma to create the weather center and to make Norman a renowned center for weather and climate research and development operations.”

Kessler’s mentorship touched many lives over the years.

“As the pioneering, first director of the National Severe Storms Laboratory, Ed was responsible for bringing my husband, Vlad Mazur, to Norman when he arrived in this country from the Soviet Union, giving him inestimable support and encouragement to rebuild his career here,” Marijo Hennagin-Mazur posted on social media upon hearing of Kessler’s death. “Ed’s unyielding code of ethics, his strong social conscience and keen sense of personal responsibility for keeping the world sane and safe, and making it better for all of us, were always awe-inspiring.

“Ed found corruption — especially political corruption — to be intolerable, and called it out whenever and wherever he saw it, which often made him a thorn in the side of its practitioners.”

After his retirement, Kessler became politically active, championing transparency in government and commuter rail, among other things.

“He was a government employee and, because of his high ranking in the government, he was not allowed to become political,” longtime family friend Mary Francis said. “As soon as he retired, then he became active in Common Cause. He was on the board of directors of Common Cause.”

Kessler chaired Common Cause Oklahoma for a number of years.

“He was a bulldog when it came to protecting the people’s right to know. That’s what Common Cause does; they are for open and accountable government,” Francis said. “He kept meticulous records and had many, many appearances before the Oklahoma Supreme Court arguing cases, even though he had no legal background.”

Kessler didn’t win every battle, but friends said he never gave up on a fight.

“Dr. Kessler was very passionate about making certain that government did the right thing, that government did not take advantage of the people,” said Evan Stair, Passenger Rail Oklahoma president. “He was more than a rail advocate, he was a Renaissance man.”

Kessler fought unsuccessfully to keep Union Station in Oklahoma City and was a participant in other endeavors, such as the Eastern Flyer Task Force, which advocated for a commuter rail between Oklahoma City and Tulsa. Stair said Edwin was also a supporter of Heartland Flyer.

“He took his passion seriously and used his intellect as a tool to help people who didn’t have the tools to fight government corruption,” Stair said. “One of the things he did so well was he sought out legal counsel to interpret not only state law but also federal law.”

He said Kessler was a life-long learner and would learn from anyone, despite his own towering intellect.

“His most endearing characteristic was the fact that he never looked down on anybody,” Francis said. “Even as the executive director of one of only 12 national labs and with eminent degrees, he accepted all people as equal. He was humble.”

Kessler’s family is working with friends to plan a memorial service in Norman.