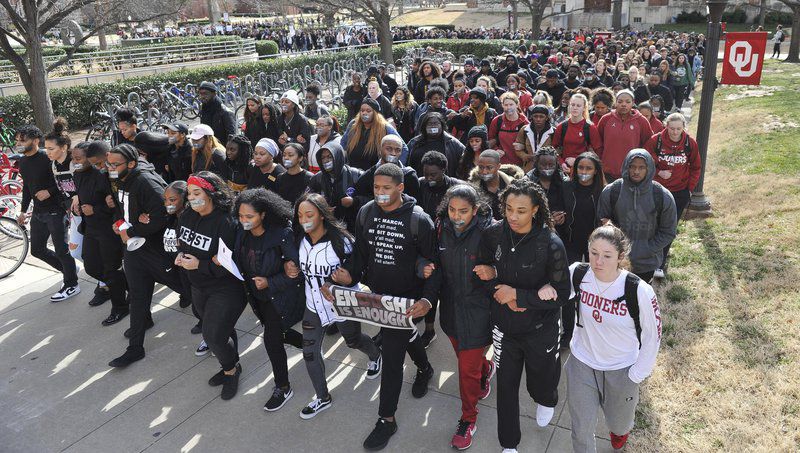 Students wear tape over their mouths and carry newspapers and signs as they walk across campus during the Better Together March Thursday. The march began in front of Dale Hall and ended on the steps of the memorial union, where students demanded change in light of two blackface incidents in the university community. 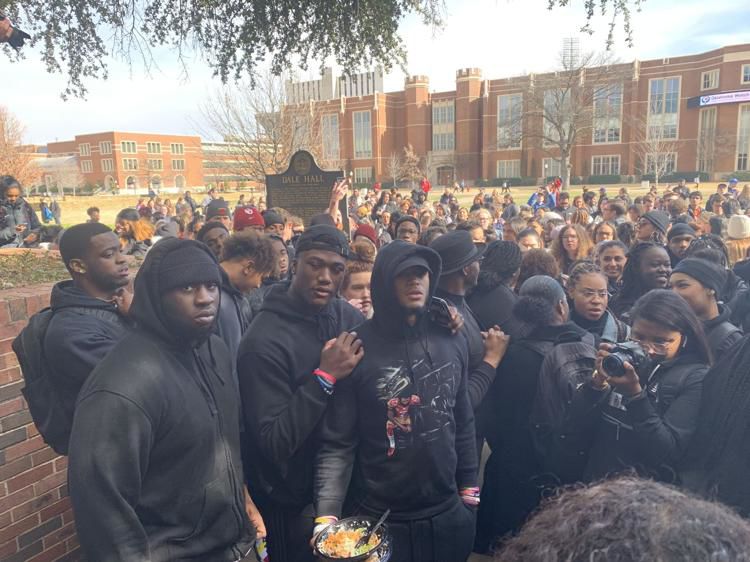 Students wear tape over their mouths and carry newspapers and signs as they walk across campus during the Better Together March Thursday. The march began in front of Dale Hall and ended on the steps of the memorial union, where students demanded change in light of two blackface incidents in the university community.

Of the messages Nick Basquine had Saturday evening, that one stood out. I had been seeking more understanding after four days, and counting, of acute racial pain in America.

You know Basquine, the former Oklahoma receiver and Norman North High School star. He’s been lining up pro workouts during the pandemic in hopes of making it to the NFL. He’s a football player, and a damn thoughtful one, who sat in on at least six meetings about racial issues while at OU.

As a young walk-on, he witnessed anguish on campus and demonstrated publicly after members of the Sigma Alpha Epsilon fraternity’s racist chant surfaced online.

I didn’t expect Basquine, who is black, to have all the answers to my questions, or for the conversation to be without discomfort. But I wanted to know how to help mend the racial divide in his and my country. I owe that, and need to make sure I’m doing and saying productive things.

But first, I need to listen.

Basquine is still shaken by what happened to George Floyd on Monday — he cares about all the senseless black killings at the hands of police or others during his lifetime. But this one hit hard because it was so brutal.

While being arrested Floyd said he couldn’t breathe. Minneapolis police officer Derek Chauvin placed and kept his knee on Floyd’s neck for nine minutes before he eventually died.

Video of the incident ignited protests and riots that continued Saturday night in various U.S. cities. Images of the chaos show an unrecognizable but not all that unfamiliar America. Because we’ve seen this before. In Ferguson, Missouri. In Baltimore. In Milwaukee. Charlotte.

“This one … feels different for me,” Basquine said. “It wasn’t due to gun violence. It was essentially hand-to-hand combat. He was detained, described as ‘not a threat’ in their handbook when a suspect in is handcuffs.

“It was knee-to-throat for 8 minutes and 46 seconds. Anybody with a pulse understands that that’s unnecessary.”

Basquine’s trying to understand things too.

Many agree about Floyd’s death being a severe injustice. Chauvin has been charged with third-degree murder and manslaughter. Statements denouncing racism and mourning Floyd have flooded from practically every which way, including college and pro sports.

If that sounds like a familiar story, it is.

Because as we know, when the protesters have all gone home, when Floyd’s name exits the news cycle — like Eric Garner’s, Terence Crutcher's, Trayvon Martin's and more — white Americans who care about injustices against their black brothers and sisters will exit the chat too. That’s where this narrative has usually gone.

If we want to break that trend, be better than the officers who stood by while Floyd died, then there’s a starting point. It isn’t in the streets, or with a donation or in community outreach. Those things are fine.

“When you’re in the comfort of your own community,” Basquine said, “that’s kind of when you let your hair down. You’re your true self. If you want true change, you’ll have to change your true self, and I think those are the scenarios where it’s most important, when it’s the absence of a black person.”

In our safe havens with families and friends, we can denounce the n-word. We can open our ears and keep from going blind to the issue.

Microaggression — subtle, discriminatory comments which may be unintentional but are still hurtful — is an important study too, Basquine said. Overt racism is easy to spot, but covert racism has a cost too.

It’s also dealing with a hard truth: “This is the truth of America,” Basquine said. “It’s a tale of two cities. White people live a certain way and can do certain things, and then people of color, specifically black people, have to live a different way.”

And they are viewed two different ways. As an OU football player, Basquine was and is held in high regard, especially once he earned a scholarship and played regularly. Strangers want pictures with the Sooners, want their autographs. Want to pay for their meals. They scream when they reach the end zone.

But there’s a disconnect somewhere. On the field, they’re heroes. In the street, they’re someone else. Why?

At one of the OU football team’s first demonstrations following the SAE incident in 2015, players were going to lock arms in front of Dale Hall while wearing all black. They gathered at the same place in 2019 following a blackface incident on campus.

Basquine ran home, covered himself neck to toe and met his teammates. Coaches learned what was happening and one of them went to Dale Hall.

“I’m not gonna say the coach's name, for obvious reasons, but I was locked in arm with this defensive player, and I hear behind me, ‘So, are ya’ll going to practice today?’ That was the first thing (the coach) said, rather than try to show solidarity with us,” Basquine said. “So what are you really out here for? You were just seeing if we were going to practice.

“That’s the issue. You know it’s wrong, But your mind is still on something minute compared to our issue.”

There isn’t enough room in a Sunday newspaper or time before my deadline to solve the issue. But there’s plenty of time to start.

“If you have a close friend who's black, get in contact with them,” Basquine said. “Ask them what you can do, how they’re feeling, what things offend them. Find as much knowledge as you can being conscious of what you say and do.”

“Man is always talking 'bout it's inhumanity to man. But what is he tryin' to do to make it a better man?”

Are we even listening?