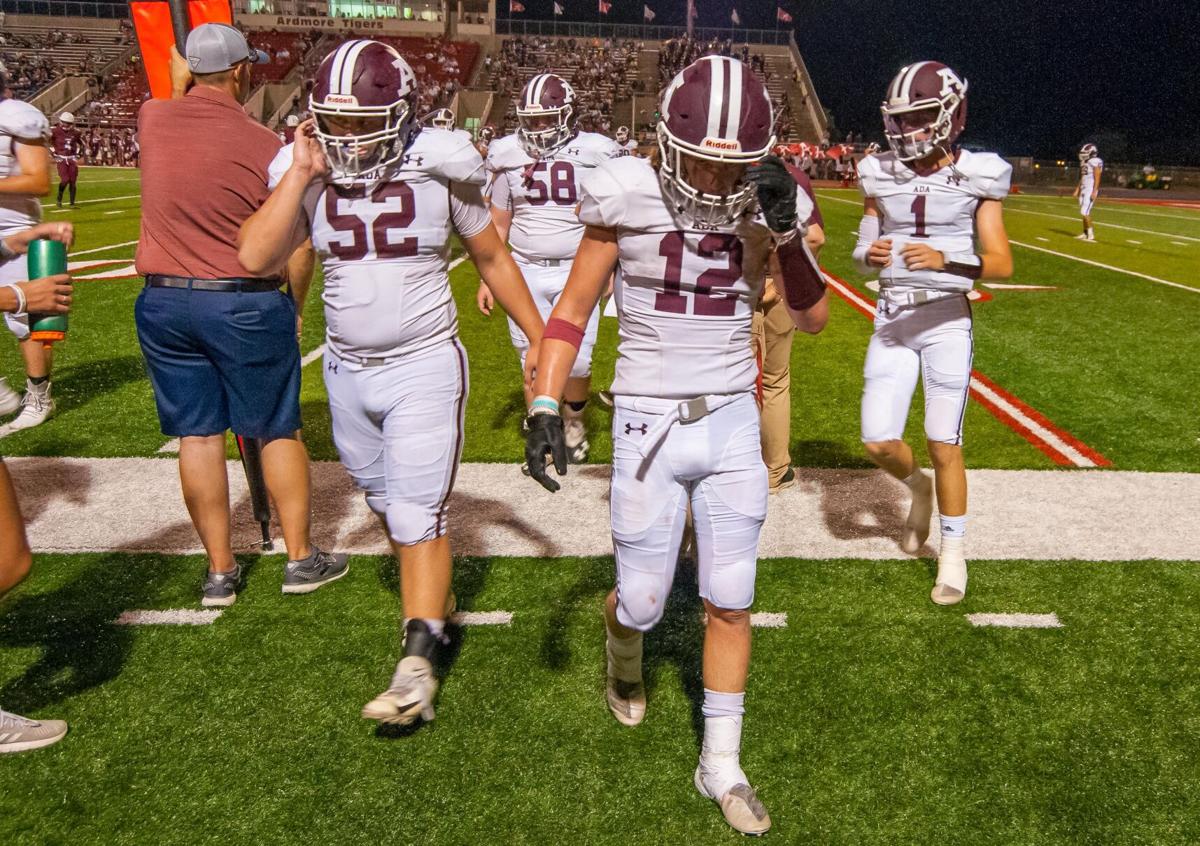 Ada players Caden Balthrop (52), Caden Whitehead (58), Jarron Christian (12) and Carter Freeland (1) walk off the field in the closing seconds of the Cougars’ 21-0 loss to Ardmore in Week 1 at Noble Stadium. 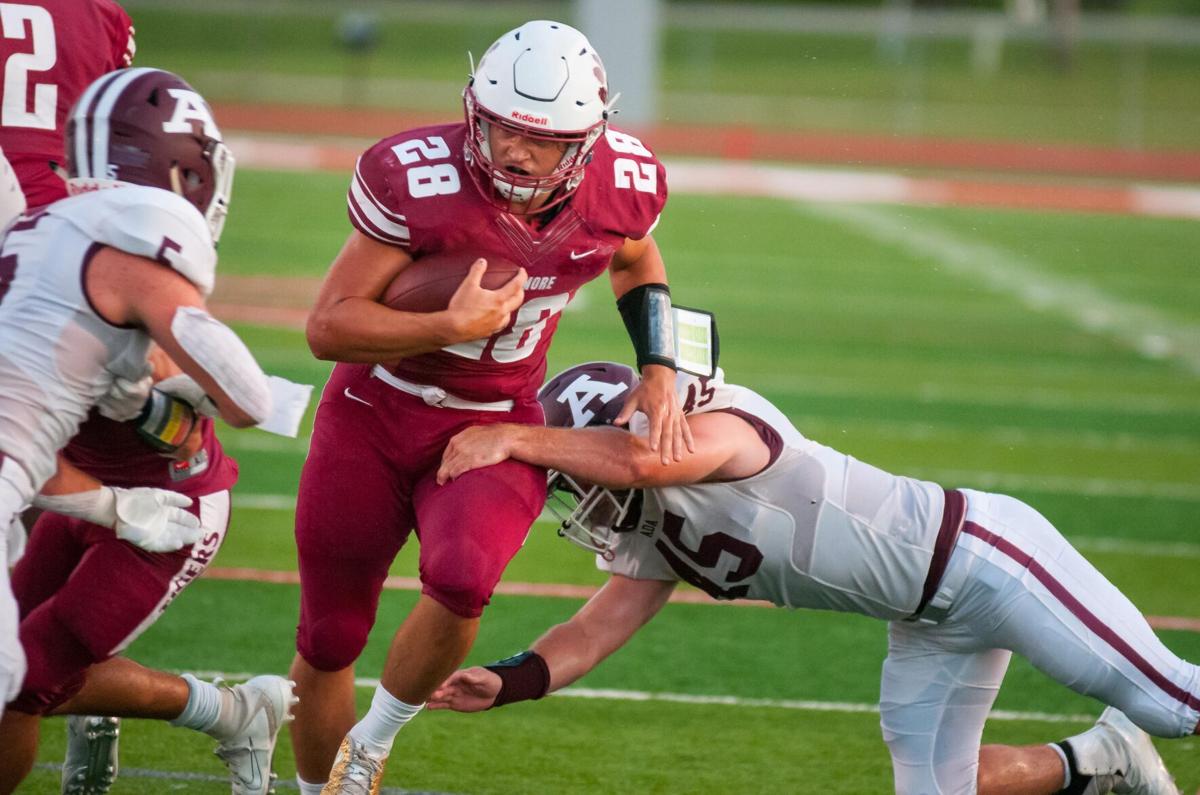 Ada defenders Zac Carroll (5) and Kohner Gallagher (45) close in on Ardmore running back Antone Scallion (28) during their Week 1 contest Friday night in Ardmore. Scallion rushed for 121 yards and three touchdowns to lead the Tigers to a 21-0 victory.

Ada players Caden Balthrop (52), Caden Whitehead (58), Jarron Christian (12) and Carter Freeland (1) walk off the field in the closing seconds of the Cougars’ 21-0 loss to Ardmore in Week 1 at Noble Stadium.

Ada defenders Zac Carroll (5) and Kohner Gallagher (45) close in on Ardmore running back Antone Scallion (28) during their Week 1 contest Friday night in Ardmore. Scallion rushed for 121 yards and three touchdowns to lead the Tigers to a 21-0 victory.

ARDMORE — The Ada Cougars showed flashes of explosiveness on offense at times against rival Ardmore Friday night at Noble Stadium. The Ada offense just didn’t get much time on the field.

Ardmore used three long, time-consuming drives to control the clock and kept Ada out of the end zone in a 21-0 victory over the Cougars in the season-opener for both teams.

The Tigers’ first drive consisted of 17 plays that covered 88 yards and used 8:54 off the first-quarter clock.

Ardmore put together a 14-play, 82-yard drive in the second quarter that consumed 8:38 of the clock.

The Tigers’ final scoring drive went for 88 yards in 10 plays and took 5:25 off the third-quarter clock.

All three Ardmore scores were 2-yard touchdown runs by backup junior running back Antone Scallion. He came off the bench and finished with 21 rushes for 121 yards and the three touchdowns.

Gallagher was no slouch for the Ada run game. He carried the ball 12 times for 100 yards.

The Ardmore offense produced 28 first downs compared to just seven for the Cougars. The host Tigers piled up 373 yards of total offense on 68 plays compared to 138 yards for Ada on 32 offensive snaps.

Another key stat: Ardmore converted on 11-of-15 third downs compared to just 2-of-9 for the Cougars.

“We couldn’t convert on third down, occasionally due to penalties that put us in a longer yardage situation than desired. On other occasions it was due to a lack of execution,” said Ada head coach Chris Berus. “Defensively, it was the transverse. We couldn’t get off the field on third down situations and again penalties aided in continuing drives for the Tigers.”

Gallagher broke two arm tackles on his way to a 40-yard romp on Ada’s first offensive play of the game before he was finally dragged down from behind.

The Cougars nearly scored when quarterback Carter Freeland threw a jump ball to sophomore Andrew Hughes in the back of the end zone from 31 yards away. However, the ball arrived a bit too late and a pair of Ardmore defenders kept Hughes from making the catch.

Trailing 6-0 after Scallion’s first touchdown — a PAT kick from Rudy Vargas was wide left — Gallagher got Ada into Ardmore territory with a nice 28-yard scamper. Another big run was erased due to a block-in-the-back penalty. Freeland tried to connect with receiver David Johnson, who made a nice catch in single coverage down the far sideline, but the throw led him out of bounds.

The Cougars couldn’t get much going offensively in the second half. They had one final chance to get on the scoreboard after Vargus missed a 43-yard field goal for the Tigers.

Freeland immediately connected with Hughes for a 34-yard gain that got Ada past midfield. However, Ardmore’s Jalen Cohee intercepted Freeland’s next pass to effectively end the game.

Berus said his team can learn from getting a game under its belt.

“Experiencing varsity game speed and execution for the first time will help in players understanding the urgency of practice prep through the week,” he said.

Ada will face another rival this week. The Cougars travel to McAlester Friday night for a clash with the Buffaloes.