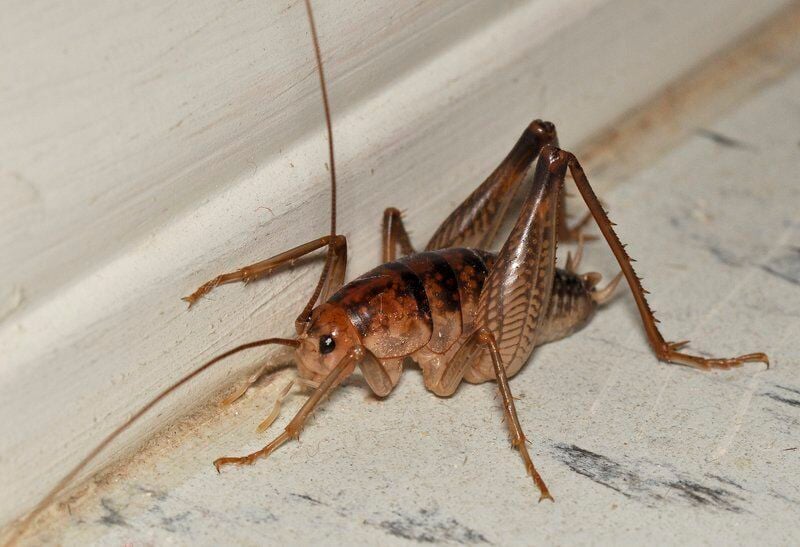 A spotted camel cricket pauses briefly as it scurries through a utility closet. Note the humped back and horn-like appendages at the rear of the abdomen known as cerci, indicating that this is a male. Females also have cerci, but they also have a long, horn-like ovipositor growing out from between the cerci. The ovipositor would be about half the length of the insect’s abdomen. 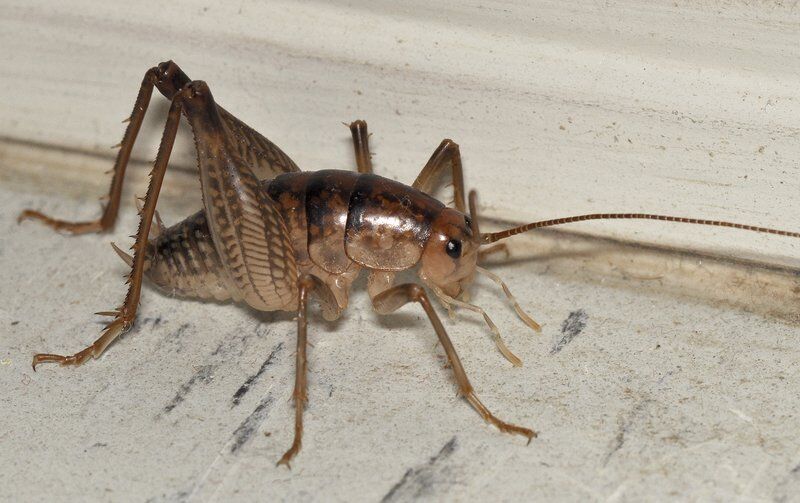 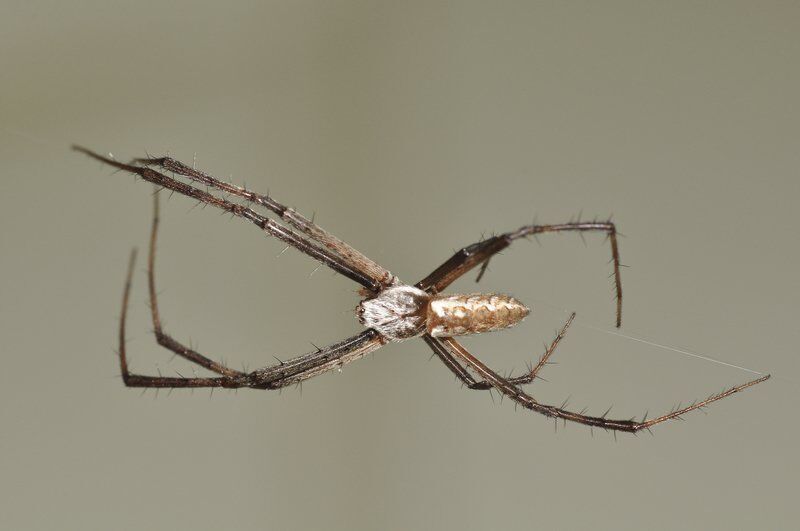 A male black-and-yellow argiope attempts to woo a female of the species by plucking the strings on her web. Note the overall dark legs and elongated abdomen. The male is also much smaller than the female.

A spotted camel cricket pauses briefly as it scurries through a utility closet. Note the humped back and horn-like appendages at the rear of the abdomen known as cerci, indicating that this is a male. Females also have cerci, but they also have a long, horn-like ovipositor growing out from between the cerci. The ovipositor would be about half the length of the insect’s abdomen.

A male black-and-yellow argiope attempts to woo a female of the species by plucking the strings on her web. Note the overall dark legs and elongated abdomen. The male is also much smaller than the female.

Dealing with hundreds of black field crickets in the late summer and fall, whether they’re all over your porch or the entrance to a business, is enough to put a person off of crickets.

However, seeing a less common species is a real treat. At least to me anyway.

I recently saw a spotted camel cricket scampering down a hallway and then into a utility closet (see photo). At least, I’m pretty sure it was a spotted camel cricket. It was for sure a camel cricket. According to the National Audubon Society, “Only a specialist can reliably identify species.” But, I’m about 90% sure that the cricket in my photo is of the spotted variety — ceuthophilus maculatus. If I’m incorrect on the identification, I will let you know.

Also, I believe it’s a male. More on that in appearance.

At first, I thought it was a wolf spider, but at second glance, I noticed it was the cricket in question.

As I never seem to have a camera with me when I see an unusual cricket, this time, I ran to grab my camera.

Luckily, it remained still for a minute or so while I shot away. These crickets typically don’t remain still, or out in the open for very long. In fact, people tend to get a little freaked out when they see them as they wiggle along very quickly. Also, they can jump quite a distance.

And, if you think camel crickets are unusual, wait until you see any species of mole cricket, or, the ultimate: the Jerusalem cricket. Talk about different, those things look like aliens from another planet! They’re massive.

And, I’ve seen the previously mentioned crickets in the past, but of course, I didn’t have a camera with me!

Patterns vary, but spotted camel crickets generally are glossy dark brown spotted or streaked with yellowish to reddish-brown on the thorax and hind femora (back leg).

Both male and female have little horn-like appendages at the rear of the abdomen called cerci (see photo). However, female camel crickets have an ovipositor which looks like a long, curved horn growing out from between the cerci.

It is believed camel crickets are scavengers. They eat fungi, roots, foliage, fruits or dead insects, including other camel crickets, according to the Audubon Society.

Dark places such as under logs, rocks, rotting tree bark, and damp places such as caves or residential basements. They are nocturnal, and usually remain outdoors. However, they sometimes wander into homes.

The spotted camel cricket can be found all over Oklahoma. The total range covers all states east of the Rocky Mountains and up into Canada, eh!

Don’t mess with a lady while she’s eating!

I recently watched a male spider learn that lesson the hard way. Don’t worry, he lived, but he surely learned a lesson.

In a previous column concerning black-and-yellow argiope spiders, I wrote, “According to entomologists at Texas A&M University, once a female is located, a male will build a small web with a white zigzag band across the middle, either nearby or in an outlying part of the female’s web. Potential males court by plucking and vibrating her web.”

Well, while visiting my daughter and her family recently, my son-in-law mentioned that there was a small spider on the side of a web, which was created by a larger spider near their porch.

I knew immediately it was a male. I went out to observe for a while, and, it was interesting to watch how the male — much, much smaller than the female — was plucking the strings of the web like a guitar (see photo).

The female, however, was busy consuming an insect she had snagged previously. She also had some other insects stuck in her web, so she was taking her time.

But once the female completed her first meal, the male moved closer to her. He moved about eight inches, which was about one-third of the web.

With lightning quick speed, the female bolted toward the unwelcome guest, who then hightailed it back to his original location. She stopped about halfway to the male, so it was clearly a warning charge. And it was quite effective!

And to be honest, he was still attempting to woo her hours later after the sun went down. As much as I wanted to, I couldn’t spend an entire night watching to see if he was successful. I figure he eventually was.

Randy Mitchell is a freelance writer and photographer. He has been an avid birdwatcher, nature enthusiast and photographer for more than 40 years. Reach him at rnw@usa.com.