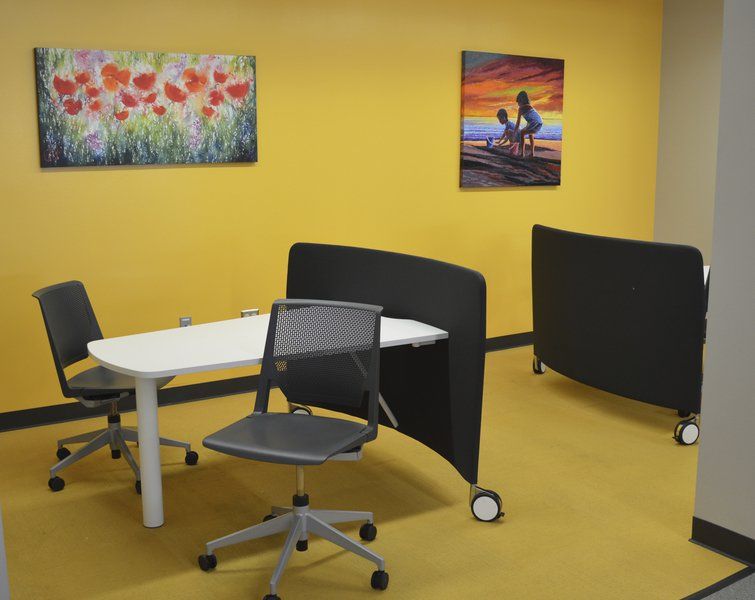 Space at the West Norman Library branch can be adapted for a variety of uses with new cheerful colors and movable furniture. 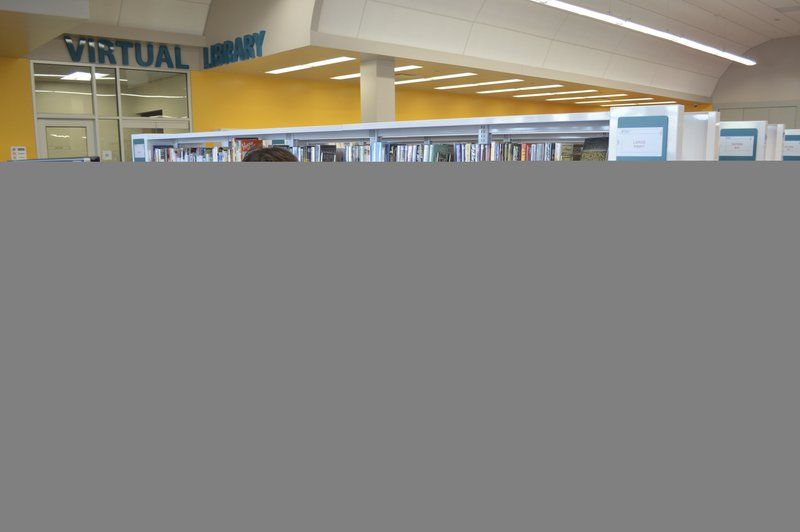 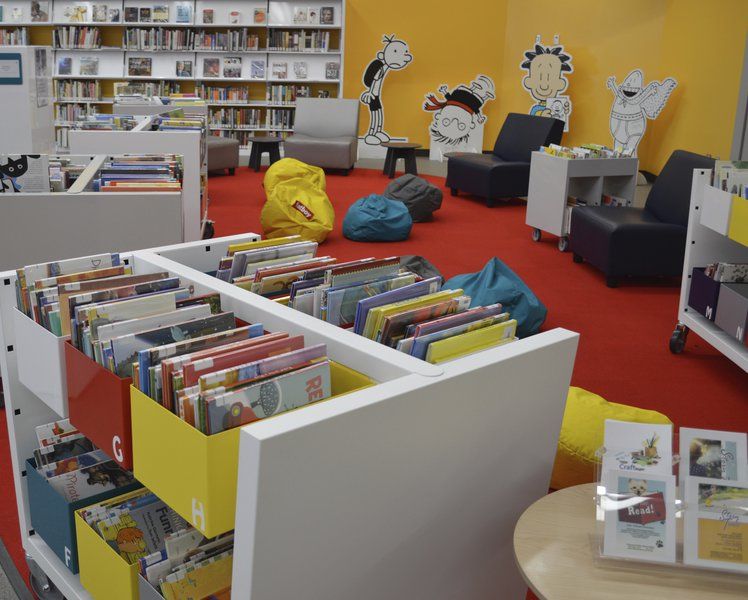 Children’s furniture at the West Norman Library branch is movable and multipurpose. 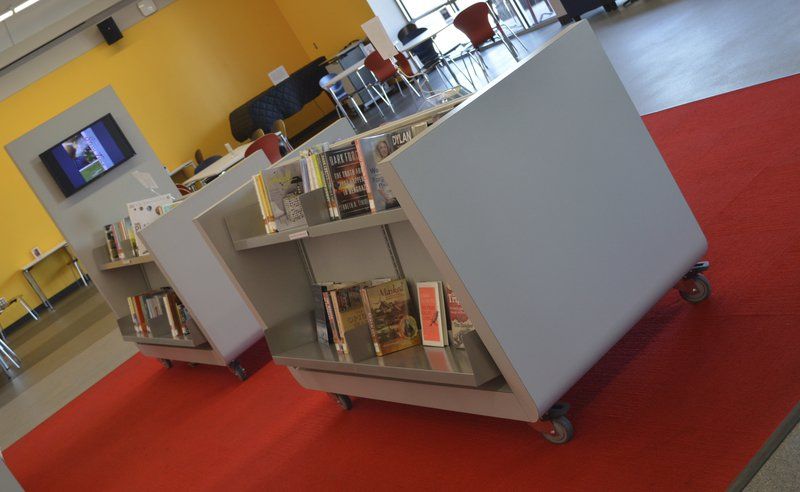 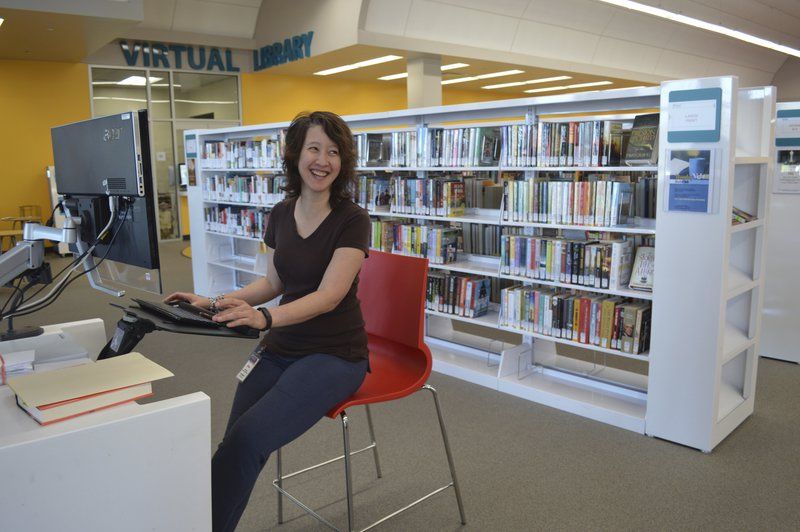 Librarian Kim Zahller is on duty March 24, to help patrons at the West Norman Library branch. This newest of Norman’s libraries has many modern features to respond to differences in how libraries are used.

Space at the West Norman Library branch can be adapted for a variety of uses with new cheerful colors and movable furniture.

Children’s furniture at the West Norman Library branch is movable and multipurpose.

Librarian Kim Zahller is on duty March 24, to help patrons at the West Norman Library branch. This newest of Norman’s libraries has many modern features to respond to differences in how libraries are used.

Roof gardens, spaces that open to the outside, covered bike racks and cooperative learning opportunities are just a few of the likely characteristics of a future Norman library. Technology and cultural shifts are changing what services are wanted and needed, how people use the library, and how information will be accessed in the not-so-distant future.

With some vibrant concepts on the drawing board, Norman is ready to make that shift to better serve current and future generations.

“While the downtown Norman library continues to be the busiest in the library system, it is no longer adequate for the demands of a community that made more than 1.1 million circulation transactions in 2013 and sees more than half a million visitors during the year,” said Anne Masters, Pioneer Library Services director.

Voters will decide in the near future whether to build two new libraries to better serve the community. If approved, the proposed new central library will be built at Acres Street and James Garner Avenue north of the Andrews Park skate park.

Norman residents were invited to two rounds of public meetings last September and October on future library plans, led by representatives from Meyer, Scherer & Rockcastle, the architectural firm hired by the Pioneer Library System to design proposed facilities in Norman, Purcell and Tecumseh.

From those meetings came a general example of what could be done with those spaces to fulfill as many wishes as possible of the public, as well as a projected price tag for the work.

“For a public library to be a success, it requires input from the staff, public and associated professionals,” said Jeff Scherer, founding principal architect with Meyer, Scherer & Rockcastle.

With an estimated $39 million cost, the new library will serve a variety of public needs while remaining structurally adaptable for future changes. The latest in architectural designs for libraries creates a more fluid environment with open design, electronic outlets in the floors and moveable furniture to allow for the way the space is used to change as the needs of the community changes over time.

This new type of design keeps libraries functional for decades despite changes in technology and library uses.

The location at Acres and James Garner presents some interesting challenges and residents have expressed concerns about noise from the trains, but that’s something the city will address.

“The city has been working on a quiet zone for a number of years and it is targeted for 2016,” Public Works Director Shawn O’Leary said.

The central library is planned at 81,000 square feet and three stories high to create a small footprint. The roof terraces will be green — literally green covered with vegetative elements like sedum — to slow water flow.

In the future, library space will be used differently than it is today. Those changes are already happening, but CDs and DVDs will go away and music, movies and other information carried on CDs and DVDs will be accessed by library patrons more conveniently through digital downloads. That means less space will be needed for housing those items and more space will open up to create an environment for a wider variety of community uses.

“We have seen a boom nationally in new library development,” Scherer said. “There is a heavy use of libraries now, much more than there has ever been before. Pioneer is on the cutting edge nationally for library service with offerings like the 24-hour Library facilities in Norman.”

Legacy Trail will be integrated into the central library project and expanded to provide bike and walking access. Andrews Park is across the street which connects the library to other community activities.

There will be CART access and James Garner Avenue will be extended. Acres Street will be a slow zone where it passes the library. Vehicular access will be available from Hughbert or Acres.

Culverts are proposed to run under the library parking lot with native plantings creating rain gardens with walkable surfaces.

Concepts also include a covered walkway, a café with a terrace and a place for cyclists to park bicycles.

The third floor is proposed to provide a large meeting room to serve up to 350 people and would include outdoor space. The third floor would also house the local and family history (genealogy) area of the library.

Also proposed is an east branch library on Alameda Street next to Fire Station No. 9 east of 24th Avenue Southeast. That smaller satellite library has a $5 million price tag and is conceived as 12,500 square feet and could be expanded in the future to meet the needs of a growing east side population.

“While the library system now has in place the 24-Hour Library facility for east side residents, the intention has always been to have a full branch library location to serve the east side,” Masters said.

A meeting room with an outdoor terrace also would serve the community with story time and other events.

The east side branch would house a large open area with teens, children, adults and technology services.

Both the central and east side sites will provide areas of refuge in case of tornado built to serve the maximum logical occupancy of each building.