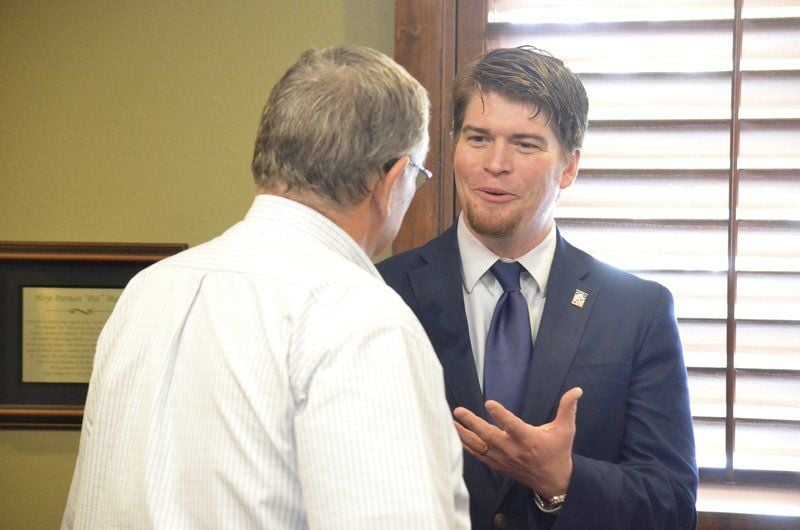 Terry Floyd talks to Bob Thompson during Floyd’s welcome reception on May 5, 2011 at the Norman Chamber of Commerce. Floyd was hired as Norman’s Development Coordinator to improve business relations in March 2011. 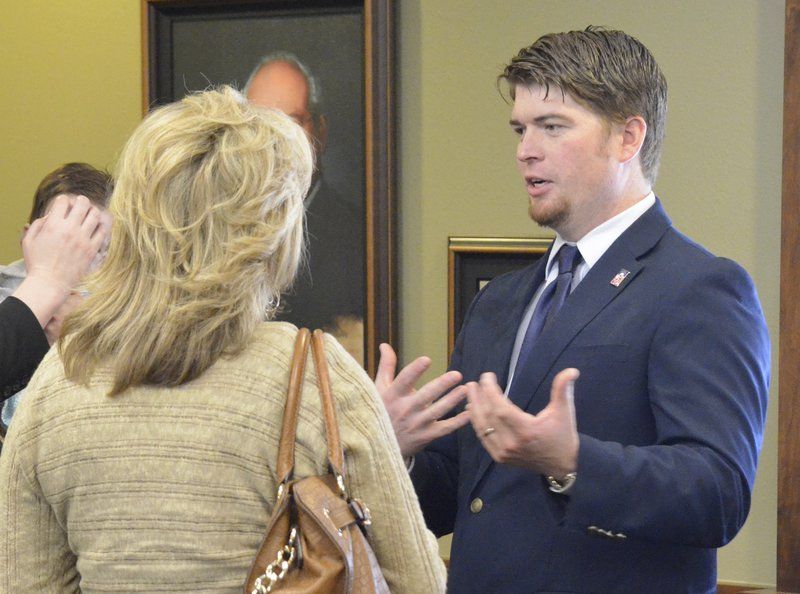 In this file taken shortly after Norman Development Coordinator Terry Floyd was hired, he chats with Lynn Palmerton.

Terry Floyd talks to Bob Thompson during Floyd’s welcome reception on May 5, 2011 at the Norman Chamber of Commerce. Floyd was hired as Norman’s Development Coordinator to improve business relations in March 2011.

In this file taken shortly after Norman Development Coordinator Terry Floyd was hired, he chats with Lynn Palmerton.

In 2014, Norman issued 98 building permits for new commercial construction for a total value of $49,214,864. Including other commercial activity such as additions or remodeling, the city issued a total of 284 commercial building permits during 2014 for a total value of $88,365,197 for non-residential permits. Total permits for the year including residential tallied at 2,872 representing $278,201,768.

To assist business owners with the city’s permitting process, Norman hired Development Coordinator Terry Floyd three years ago in March. Floyd came from El Reno, where he served as a city department head as the community services director. In that role, Floyd had a broad range of responsibilities and experience including assisting with capital improvement projects.

The job of development coordinator was opened up despite the ongoing post recession freeze on city staff because of problems with communication between developers and the city.

In some cases, a small business owner may be wading through the city permitting process for the first time and need help with a process that could seem alien and daunting. Other times a more experienced developer might be bringing something forward that is impacted by changing rules and regulation.

“Sometimes I’m a front door,” Floyd said. “Sometimes a project (manager) may not contact me until completion.”

Floyd’s hiring three years ago represented a rededication by the city to customer service. While it is important that Norman have standards that keep the bar high on the quality of construction as well as environmental and aesthetic standards, local business owners, commercial developers and the trades and subcontractors they work with are customers of the city.

The Norman City Council sets the bar, but city staff serves the customers by helping them meet those requirements, Floyd explained.

Six months ago, the city also hired Sara Kaplan who has been the retail marketing coordinator. She works with prospects and with Floyd.

“We can work together on helping that business know what they need to do,” Floyd said.

“We’ll be very busy with that and are very aware of the impact that project can cost the businesses,” Floyd said.

Kaplan also created a website and is working to bring more retail business to Norman.

Floyd has worked on a number of projects to improve communication and customer service.

“I work with residential and non-residential projects including individual property owners through the development and permitting process,” Floyd said. “One of the biggest projects I’ve been involved in is the development streamlining ordinances which we implemented in 2013.”

Among other things, the streamlining process adopted by the city council extended validity of preliminary plats to five years.

Floyd said when the economy slows projects may not develop as quickly and larger properties can take years to fully build out. The added time is fairly standard practice throughout the state and saves the cost of having to go through the entire process again after only three years, the previous limit.

The change allows for forward movement during tough economic times.

Other streamlining changes simplify the process while keeping standards high.

“We allowed for an administrative approval process for a five-year extension of that preliminary plat provided it didn’t make substantive changes,” Floyd said.

Substantial changes would mean the plat has to come back through the entire process and be approved by city council again.

Additionally, final plats are now administratively approved by staff and then come to council for dedication of easements and acceptance of the public improvements.

“The planning commission no longer reviews anything on those final plats,” Floyd said.

Because the planning commission has already seen the plat by that stage, those items were already on the consent docket and were more of a hoop to jump through than a meaningful review.

“There wasn’t any public discussion, staff had already done all of the administrative review ahead of time,” Floyd said.

The process changes now allow developers to apply for dates for pre-development meetings and planning commission hearings simultaneously to speed up the process by about 30 days.

“It depends on the project,” Floyd said. “Not every developer utilizes that feature.”

Some people want their projects to go through predevelopment and get the feedback from prospective neighbors before coming before the planning commission.

Predevelopment applications are now available online. Because the radius of notification might not include all interested persons, now people can check out the city website under planning and zoning to see what pre-development meetings are on the schedule.

A new option allows properties over 40 acres applying for a certificate of survey to skip predevelopment — these are not residential developments, but are usually single homes and fairly rare.

Floyd has also brought back the city’s Brown Bag lunches.

“We meet quarterly with the Builders Association of South Central Oklahoma,” Floyd said. “That includes subcontractors, builders and trades.”

The brown bag program opened up dialogue to allow those in the building trades to ask questions and hear about changes in city code.

“I think it’s been really successful,” Floyd said. “On the residential side, we’ve made some really good strides.”

The commercial permitting process can be daunting, especially for small business owners going through it for the first time. Floyd has worked with other member of city staff to make the process more customer friendly.

“One of the things that we established last year was a customer service survey for owners, trades, contractors and other project representatives that completed a non-residential permitting project,” he said.

Each month, everyone on the permit gives feedback on the city’s service on planning, review and building inspections. Commercial users may only do a project or two a year in Norman and being able to identify troublesome areas helps city staff to serve busines owners better.

“What that’s done is created an opportunity for feedback on commercial projects,” Floyd said.

The feedback is anonymous but they can request that Floyd contact them.

Floyd also coordinates meetings between developers and others looking to invest in Norman and the appropriate members of city staff to answer their questions. He encounters everything from the person with a drawing on a napkin to large industrial users with highly developed plans.

“We sit down with individual property owners or groups that include a bevy of engineers and architects,” he said.

These meetings allow people to address potential problems before they make large investments and help them understand what the building process will take. It also allows staff to think through the project and explore options for business owners that might be less costly.

Floyd has put together a development handbook that is being used and is available online, making information easily accessible. The handbook brings the process together a step-by-step approximation

“We met with a group who is national and who potentially may be expanding to Norman and they had a copy of the handbook and had read through it,” he said. “We can direct people to it in addition to answering questions. There’s a lot of information thrown at them.”

At a time when business owners may also be working on getting financing and other issues,helping them know who to ask about concerns in the city permitting process makes the whole process of opening a new business easier.

“There’s a lot of work an entrepreneur goes through to get their business going,” Floyd said. “We are a piece of it, but there are a lot of other factors the applicant is juggling. We try to make our process as clear and concise as we can.”