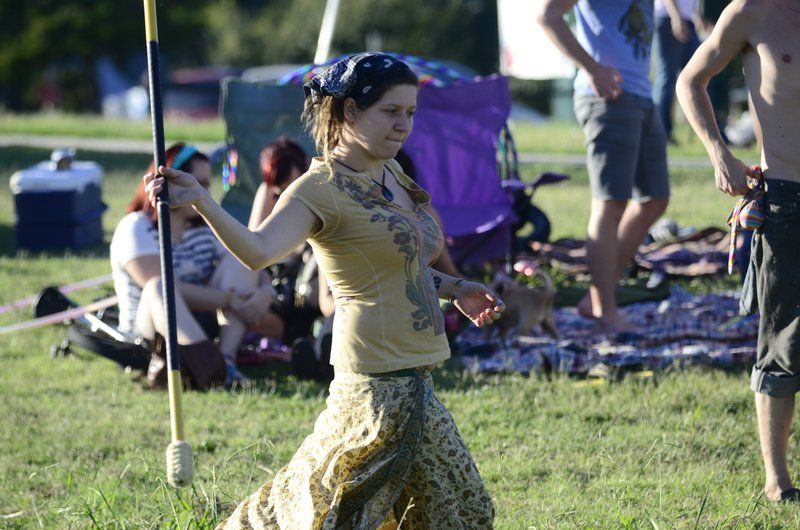 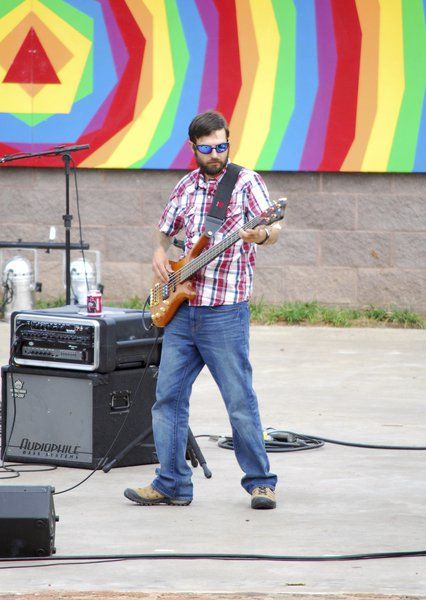 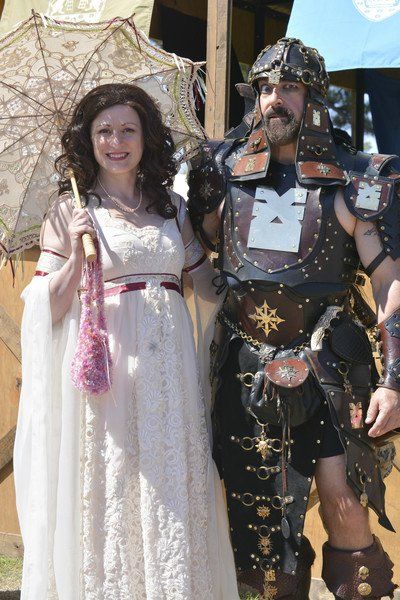 Michael and Kelly Ann show off their costumes during the Medieval Fair, Saturday, Apr. 2, 2016. (Tamah Minnis / For the Transcript) 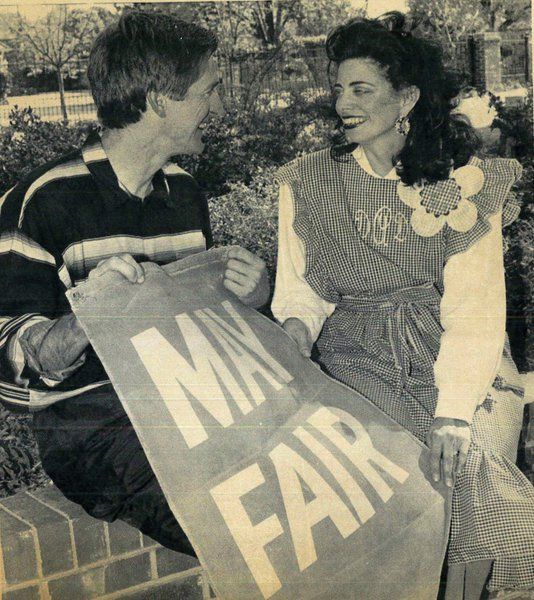 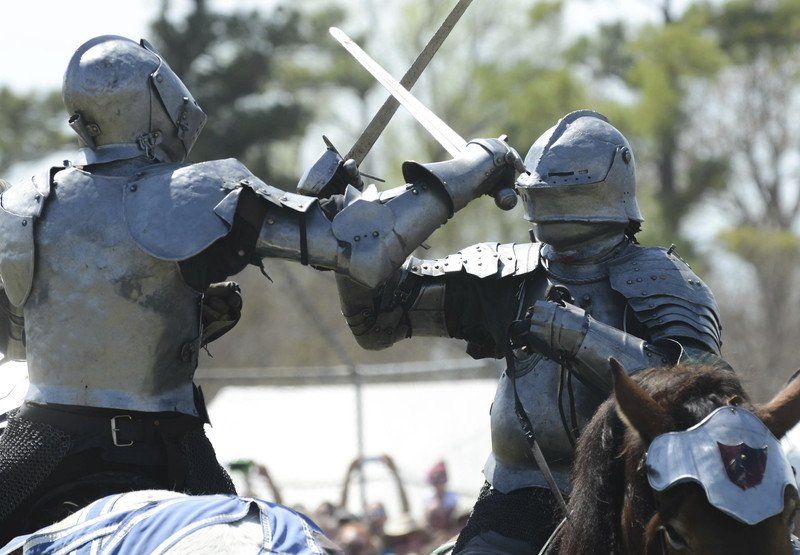 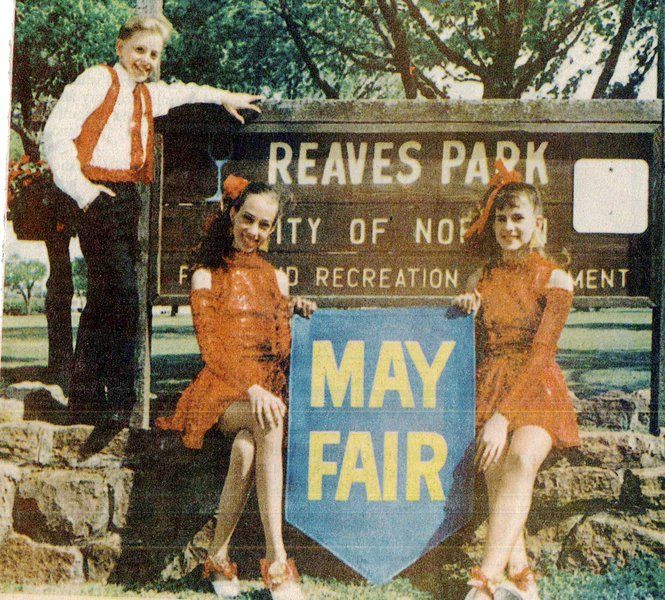 In this May 5, 1994 file photo, David Bruster, Lauren Adkins and Heather Hill of Massay’s Dancestar Productions are ready to entertain at May Fair. The festival has normally been hosted at Andrews Park but was at Reaves at least one year. 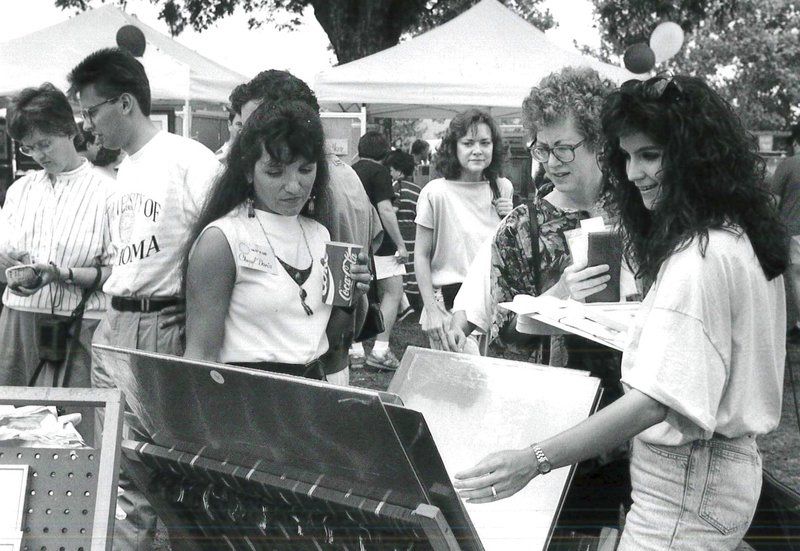 In this May 14, 1991 file photo, artist Cheryl Davis visits with Stephanie (left) and Amy Grubbas as they look at her slection of prints. 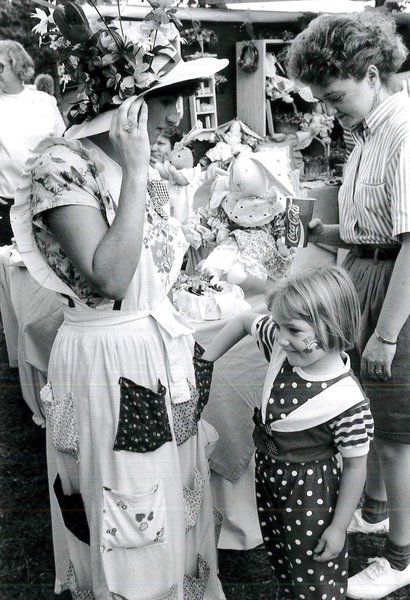 In this file photo from May 14, 1991, Jan Sullivan, dressed as May Fair’s Miss Pick-a-Pocket gets her pockets picked by Erin Andrews. Mom, Trish Andrews looks on.

Michael and Kelly Ann show off their costumes during the Medieval Fair, Saturday, Apr. 2, 2016. (Tamah Minnis / For the Transcript)

In this May 5, 1994 file photo, David Bruster, Lauren Adkins and Heather Hill of Massay’s Dancestar Productions are ready to entertain at May Fair. The festival has normally been hosted at Andrews Park but was at Reaves at least one year.

In this May 14, 1991 file photo, artist Cheryl Davis visits with Stephanie (left) and Amy Grubbas as they look at her slection of prints.

In this file photo from May 14, 1991, Jan Sullivan, dressed as May Fair’s Miss Pick-a-Pocket gets her pockets picked by Erin Andrews. Mom, Trish Andrews looks on.

Norman hosts several free annual festivals and parades, giving it a legitimate claim to the moniker, City of Festivals.

Spring kicks off the season with the Medieval Fair, Earth Day, Norman Music Festival, the 89er Parade and May Fair Arts Festival followed by summer celebrations, such as Jazz in June, 4th of July in Reaves Park, and Midsummer Night’s Fair in August.

Autumn ushers in the Cleveland County Free Fair and Groovefest. The Fall Festival in October is one of the newest city celebrations with its Halloween costume contests, candy give-aways and children’s inflatables. The Weather Festival draws people from across the region and the Oklahoma Wine Walk is a great introduction to local vineyards and wineries.

The fun doesn’t stop during winter months. Norman’s Holiday Celebration and the Christmas Parade highlight December’s holiday season while the Chocolate Festival and the Mardi Gras Parade finish out the winter season in January and February.

Following are some highlights of a few of the most enduring and beloved of Norman’s community festivities.

The Medieval Fair, now held in Reaves Park, just finished it’s 40th year. An annual event since 1977, the fair is part fantasy — expect to see a mermaid or two — and a large part living history with educational exhibits, arts, crafts, food, games, demonstrations and entertainment on multiple stages. Reenactments of jousting, and other competitions, Medieval dancing, and living chess competitions are crowd favorites. Lords and Ladies roam the park along with other costumed characters including jugglers and minstrels. The Medieval Fair is Oklahoma’s largest weekend event and the third largest event in the state.

Norman Music Festival is a free, independent music festival that has grown each year with 80,000 people flooding the streets of downtown Norman recently. Food trucks and vendors provide an interesting array of products and food.

Founded in 2008, NMF was originally a one-day event and has since grown to span two nights and one full day and night of music and arts. NMF features performers from several different genres in both indoor and outdoor venues. From jewelry to home-decor, the vendors in the Dust Bowl Market offer a range of appealing and unusual products.

May Fair is one of Norman’s longest and most enduring events. The Assistance League of Norman has hosted the event for over 40 years as a gift to the city. More recently, a 5K run was added to the day’s activities. The 5K course is USATF sanctioned and proceeds benefit the philanthropic programs of the Assistance League of Norman. May Fair is a family friendly and runs on Saturday and Sunday each year. Highlighting the event are works of art, a student art show, free children’s art activities, food vendors, entertainment, locally grown plants and flowers and quality handmade crafts for sale.

Jazz in June has been around for over 30 years. Legend has it, the idea for the musical event began over drinks and coffee at the Service Station Restaurant in 1984. Thomas Carey of the Cimarron Circuit Opera Company saw the rising popularity of jazz and decided to produce a concert as a fundraiser.

That initial performance drew about 300 people, and the event grew from there. For the past few years, more than 50,000 people have converged in Norman to enjoy Jazz in June.

The Midsummer Nights’ Fair is one of the largest art fairs in Norman, taking place in the evening, with a one-of-a-kind atmosphere. The Firehouse Art Center takes this opportunity to showcase regional artists, share its mission to provide quality art experiences and demonstrate the passion for the visual arts to the community. This juried arts festival features 30 unique, high-quality artist booths that offer pottery, jewelry, glass, sculpture, woodworking and more.

Groovefest: Human Rights Are For Everyone

Groovefest was created by University of Oklahoma students, artists, musicians and activists in 1986, with the intention of raising human rights awareness in the community. Norman Groovefest continues to highlight the work of local organizations, artists, and businesses that promote Human Rights.

From 1986 – 1992 Groovefest was held in the amphitheater at Andrews Park until outgrowing that venue and moving to the OU Duck Pond which also made it more accessible to students.

Groovefest draws musicians and activists, creating an environment where people can dance, sign a petition or hear an inspirational speaker. The event also draws local artists and it’s not unusual to hear Tibetan monks chant.

The Firehouse Art Center’s Chocolate Festival has been around for more than 30 years. Chocolate lovers and arts supporters flock to the event every year, and it has become a premiere food festival in the region for chocolate-inspired delicacies. Proceeds from the festival support the Firehouse’s visual arts education programming, both in-house and in Norman’s public elementary schools.

Local restaurants, bakeries and businesses donate samples of their best chocolate-inspired treats for the festival. While there are free art activities for children, the sale of tickets for chocolate samples is the heart of the fundraising. With over 4,000 attendees during past years, this event has been recognized with multiple awards through the years. To handle the growing participation, the festival is now hosted at the NCED Marriott on Highway 9 just east of 24th Avenue Southeast.