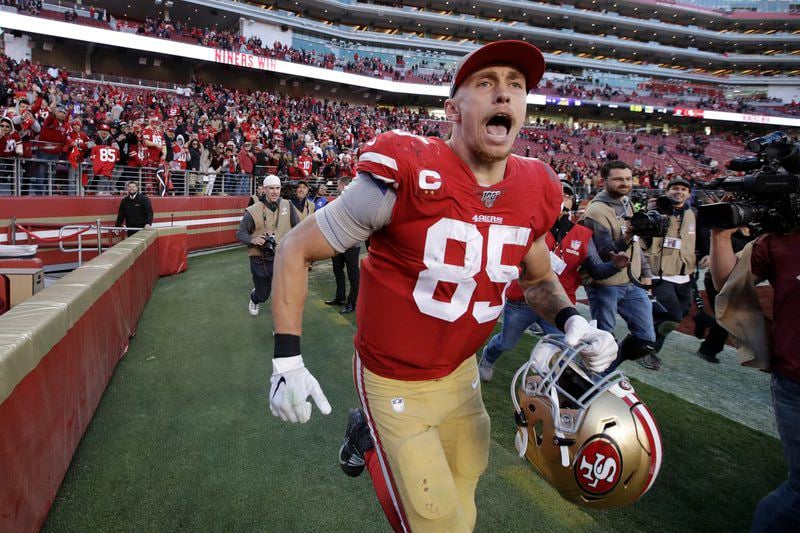 George Kittle celebrates after the 49ers beat the Minnesota Vikings 27-10 in an NFL divisional playoff game on Jan. 11. Kittle, a former Norman High star, is one win away from the Super Bowl. 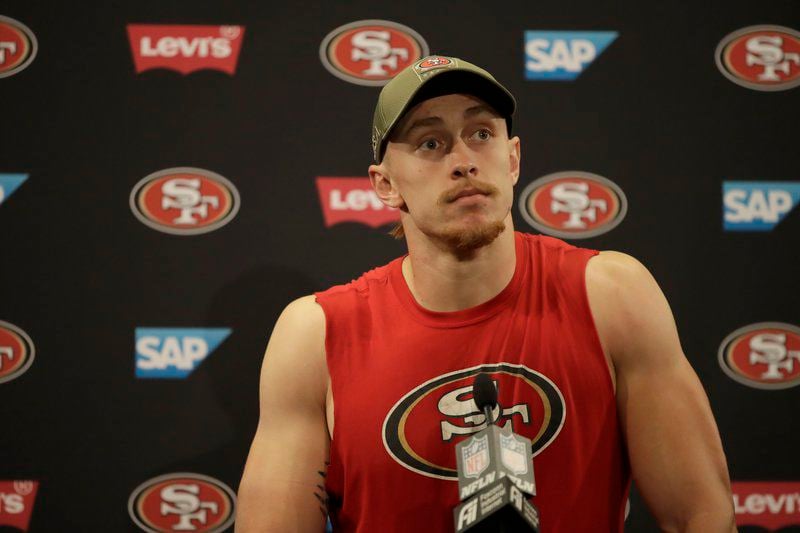 George Kittle celebrates after the 49ers beat the Minnesota Vikings 27-10 in an NFL divisional playoff game on Jan. 11. Kittle, a former Norman High star, is one win away from the Super Bowl.

Zach Long still remembers the moment clearly. He was in class at Norman High, one of his coaches came in and grabbed him.

In the hall was George Kittle, who wrapped his quarterback up in a big hug. It was national signing day. Every athlete who earned a scholarship to college had already participated in a signing ceremony. Everyone, except Kittle.

By that afternoon only a few people knew what Long didn’t: that Kittle became the recipient of the last football scholarship offer the University of Iowa had to give in its 2013 class.

“He was just so excited. He was so relieved,” Long said, “because I mean, he had a few offers, but he wasn’t crazy recruited. And to get that one … from Iowa.”

Kittle’s fairytale journey is one for the books. From Norman High, to the Iowa Hawkeyes — where his father played — to the San Francisco 49ers, who play the Green Bay Packers (Sunday, 5:40 p.m., FOX) for the right to reach Super Bowl LIV.

His former coach and teammates say his infectious, big smile — the one millions can see now on his global platform — is the same one that stretched his face in high school. “He liked to be around the field house,” former Norman High coach Greg Nation said, “if nothing else, just for the camaraderie.”

But physically, Kittle has changed a lot. His massive transformation took him from a skinny receiver/safety to the 6-foot-4, 250-pound tight end with long, slender biceps he is today.

He’s arguably the best tight end in football, with the ability to catch 85 passes for 1,053 yard and 5 touchdowns this season, in addition to his craving to block people.

In 2010, Long moved back to Norman — he’d be closer to his dad, Chuck, who was at Kansas, and at one time had the family rooted in Norman when he worked for Bob Stoops — all he saw of Kittle was highlight videos.

The two would have a kinship eventually, sparked by their dads’ relationship playing together at Iowa. But after a few video evaluations? Kittle looked long and lean, and that was about it.

But he came from good pedigree. His dad, Bruce, was coached on Iowa’s offensive line by Kirk Ferentz. Kittle’s sister, Emma, was a college volleyball player. His mom, Jan, is a former high school superstar in Iowa.

But Kittle’s own high school career was not that. He graduated at around 6 feet 2, 190 pounds. A Division I university would have to bank on him hitting a growth spurt. He drew attention from the military academies as a recruit and some small colleges, and would have gladly accepted those offers.

There were scant signs he could develop into what he is today.

“Early on when he was growing up, just because I played offensive line, I was hoping he’d go be on the offensive line somewhere, but that didn’t happen. He was gonna go be something else,” said Bruce Kittle, whose family came to Norman after Stoops hired him in 2010. “But I mean, I had a decent idea of the situation when he was in high school. We were bringing in tight ends at Oklahoma who were 230 pounds. I told him, ‘You know, you're just not at that point right now and people are gonna have to take a shot at ya.’

“They weren’t sure what to do with him because he was still coming out of that gangly phase. He had not grown into his body.”

He was still making plays.

Kittle excelled on the basketball court, was a rat in the weight room and a mismatch at wide receiver. Long’s best memory of Kittle on the field was during a win over Southmoore. The Tigers ran out the final 8:00 of game clock with a massive drive, sealing the deal with Kittle’s big fourth-and-5 reception.

There were other hints about his future. Nation, an admitted packrat, still has the numbers in his office somewhere at Haskell High School that detail the day Kittle put on a show during a shuttle run drill.

“One of the things that I always did was the shuttle drill, and I timed everybody,” Nation said. “By chance, I looked at the NFL Combine shuttle times, because we were pretty dang good that year, so I was curious — he would have finished with the second-best time in the NFL Combine that year.”

Kittle faced a long road even after receiving the great news on signing day, that because of a late decommitment, Iowa suddenly had a scholarship opening.

The Hawkeyes develop elite tight ends annually and keep a deep room of them. Kittle was told from the start that he would spend his first three years of college developing his body.

That part happened rapidly. Kittle grew roughly three inches taller and 40 pounds heavier by his senior year. He caught 22 passes and 4 touchdowns that season. Niners coach Kyle Shanahan coach still can’t believe Kittle fell to them in the fifth round of that NFL Draft.

“He’s one of the hardest workers I've ever seen,” Long said. “He's always been like that, even in high school. And whenever I saw him in college, once he started to make a name for himself, I told people, once he gets to the NFL, he is going to be a star. The way he is built, he is going to do very well. Because I knew how athletic he was.

“Obviously, that worked out.”

He’s remained close with Norman Public Schools athletic director T.D. O’Hara, whom he served as a student aide while at NHS. The past two seasons they’ve arranged for Kittle to make two pre-game hype videos for the football team; the latest one played on OU’s video board before the game against rival Norman North last season.

When Long visited him last offseason and for a game in the fall, Kittle was still the lovable goofball who hugged him in the hall that day.

“Same attitude, same demeanor,” Long said. “The popularity hasn't changed him at all, and that's really refreshing to see.”