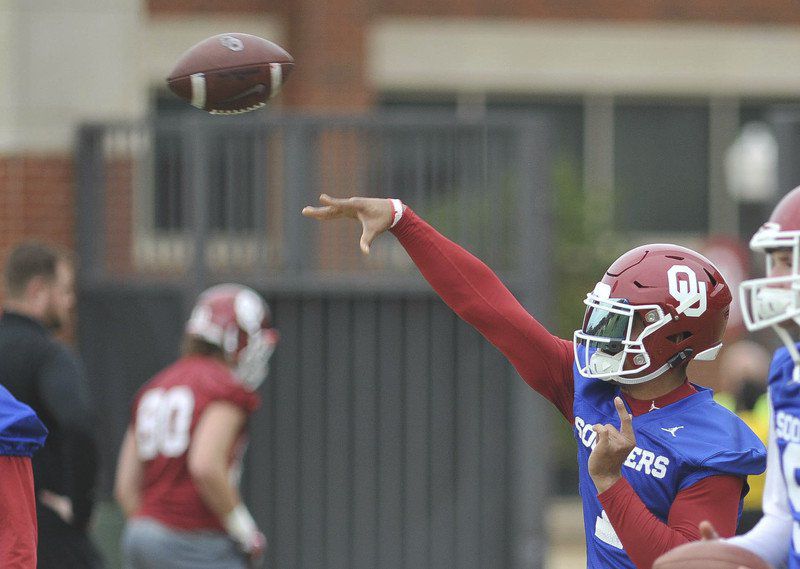 Oklahoma quarterback Jalen Hurts throws during a March 7 practice at the Gaylord Family-Oklahoma Memorial Stadium practice field. Hurts won't be at Big 12 media days next week, but he'll be a major point of interest. (Kyle Phillips / The Transcript) 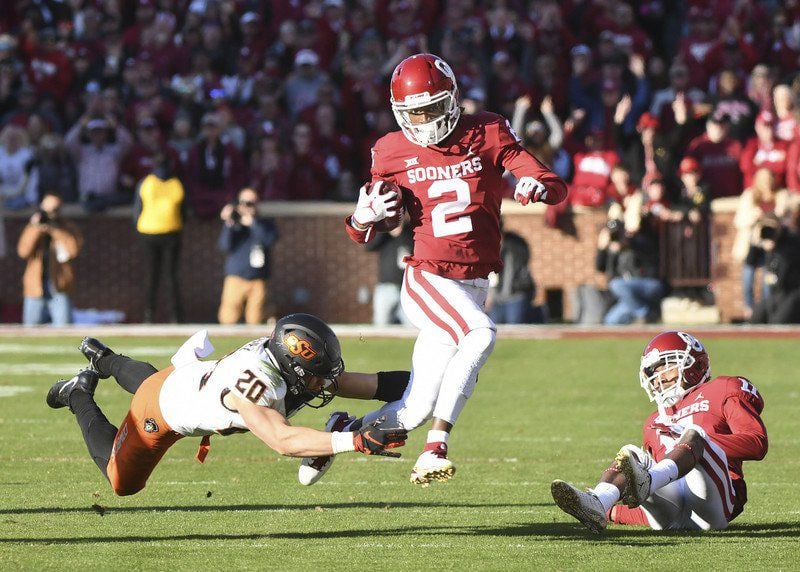 Oklahoma quarterback Jalen Hurts throws during a March 7 practice at the Gaylord Family-Oklahoma Memorial Stadium practice field. Hurts won't be at Big 12 media days next week, but he'll be a major point of interest. (Kyle Phillips / The Transcript)

Before college, Oklahoma receiver CeeDee Lamb attended a recruiting combine in the Dallas area and ran into a guy named Jalen Hurts.

They had traveled there as notable high school football stars from the Houston area — Lamb a receiver at Foster and Hurts a quarterback from Channelview. They didn’t know each other.

Later, with the older Hurts at Alabama and Lamb still trying to make a college decision, Hurts laid on the recruiting charm thick. “We need you here,” Hurts would text him.

It’s funny how things work out.

Hurts arrived at OU two months ago as a graduate transfer from Alabama. He’s expected to take over the Sooners’ quarterback spot, with Lamb as his top target. Ahead of his junior season — which figures to be his last in Norman — Lamb is poised to become the program’s next dominant wideout.

Lamb caught 65 passes for 1,158 yards and 11 TDs a year ago while playing second fiddle to Brown, whom most project to be a first-round pick in next month’s NFL Draft. The two will be there together at some point if things unfold as expected for Lamb, who is up to 193 pounds with a svelte 6-foot-2 frame.

“No doubt, he's a freak,” redshirt freshman Tanner Mordecai said. “Incredible athlete, really good receiver. He goes to get the ball better than anybody else.”

Now, Hurts and Lamb’s objective is to click downfield. Lamb has adjusted to a new quarterback in four of his last six seasons dating back to his freshman year in high school.

He worked under new QBs as a freshman and sophomore at Foster High School, before catching passes as a junior and senior from Alex Ramart, who is now at Akron. The past two seasons, Lamb's seen Baker Mayfield and Kyler Murray come and go.

The receiver hopes his biggest jump is in the next nine months. A proven blocker with sure hands, he did not make the Biletnikoff Award semifinalist list last season.

“Does it get harder to improve at [some] point? Yes,” OU coach Lincoln Riley said. “I think the biggest reason is human nature. It's complacency … That's hard for so many people. You can preach it as much as you want. But at the end of the day, there has to be some inner will and desire and drive to get that done.

“[Lamb’s] had that. He's done a good job here this spring. He's a better player this spring than he was the end of last season.”

Sometime between then and now, Lamb and Hurts reversed roles as recruiters. When the former Alabama quarterback visited Norman, his old pal from Houston was waiting with a pitch.

“He actually brought it up to me,” Lamb said. “He was like, ‘Do you remember when I tried to recruit you?’ I was like, ‘Yeah, now I’m trying to recruit you. It’s crazy how the roles change.’”

Hurts mentioned the irony too. When he got to OU, he actually gave up the jersey No. 2 he wore at Alabama, since that has been Lamb’s number the past two seasons with the Sooners.

“[At first] I wanted CeeDee to come to Alabama,” Hurts said. "It’s not like I didn’t know who he was or what he was capable of. But the tables have turned. I’m here. I guess you can say we are kind of reunited.”

Sharon Gwen Wootten, 78, of Norman, formerly of Noble, passed away on January 19, 2020. Services are pending with McMahans Funeral Home of Noble at a later date.