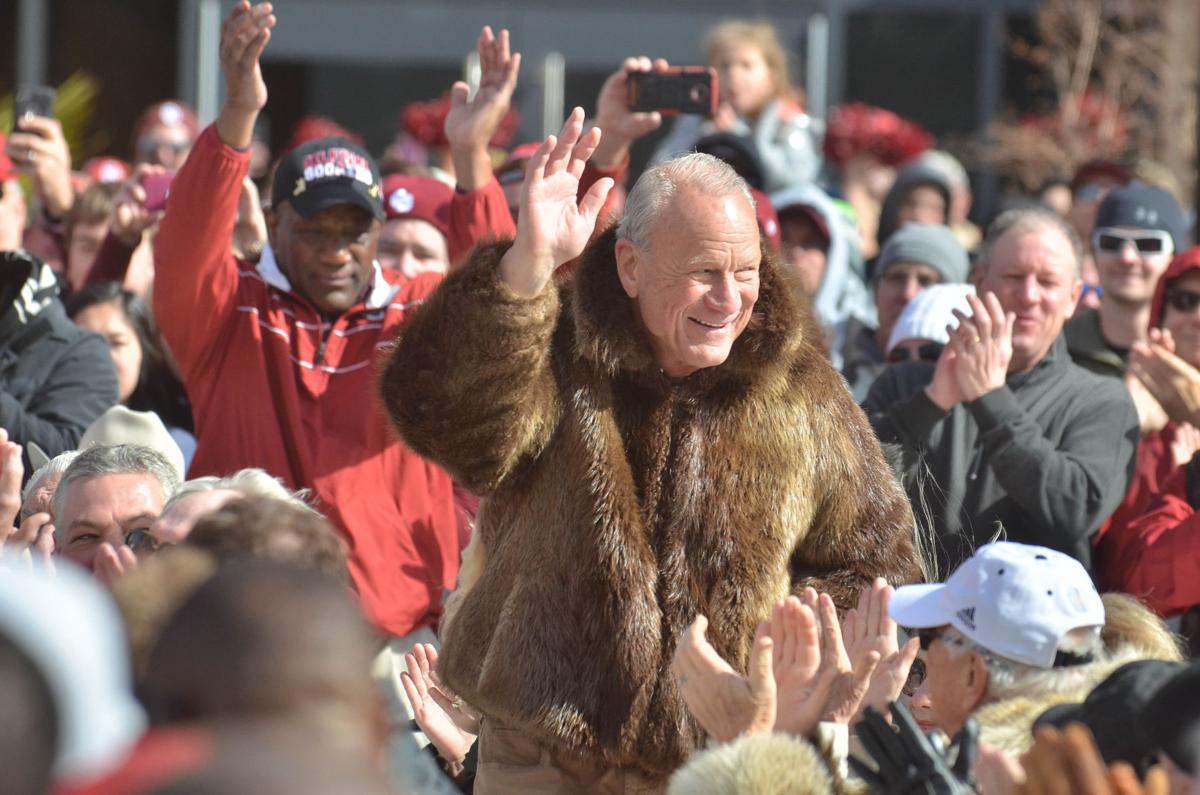 NORMAN — Oklahoma received a commitment from the nation’s top-ranked 2021 recruit, one day after one of the school’s back-to-back Heisman Trophy winners was in Norman conducting a youth football camp earlier this week.

The Sooners are thriving despite the perceived shaken landscape two seasons ago when longtime head coach Bob Stoops abruptly retired.

That was June 7, 2017. The transition from Stoops to Lincoln Riley turned out to be more than seamless, with Riley engineering consecutive College Football Playoff berths.

The first month of summer is a reminder that modern OU football is driven steadily by its administrators, players and coaches. It’s also the anniversary of a darker time.

Barry Switzer, while goofing around with Billy Sims and Baker Mayfield at Mayfield’s camp, was the one who reminded those in attendance that it was 30 years ago this week he resigned as OU’s football coach.

Switzer’s forced resignation on June 19, 1989 was a chunk of debris from storms that had been brewing at OU in the late ‘80s — NCAA probation, crimes, player arrests and the negative publicity that came with it.

He’d amassed a record of 157 victories, 29 losses and four ties in a 16-year career then-Transcript sports editor Jim Weeks described as “equally successful and turbulent” the day Switzer stepped down.

Stories of his exit landed on newspaper sports covers from New York to Los Angeles, and around 200 people in the Santee Lounge at Oklahoma Memorial Stadium listened to his final words as OU’s coach. Among them were 1969 Heisman Trophy winner Steve Owens and 1987 All-American tight end Keith Jackson.

Switzer’s emotions crossed the entire spectrum. He laughed, cried and crinkled his brow, starting off with an 866-word prepared statement in which he accepted responsibility for NCAA violations; he also fired a shot at the NCAA for since-corrected policies he deemed unfair for student-athletes.

Off script during a question-and-answer session from reporters, Switzer said: “It’s no fun anymore. I don’t enjoy walking into the office with the issues and things I have to deal with today.”

At the time, he and OU officials denied it was a faux resignation. (A $225,000 salary settlement undermined that assertion). Switzer later detailed in his autobiography “Bootlegger’s Boy” that he had been forced out by administrators who outranked then-athletic director Donnie Duncan.

Staying at OU would have been difficult either way, considering the aftershocks from 1988 and 1989. On Dec. 19 of ’88, exactly six months before Swtizer left, the NCAA placed OU on probation for 20 violations it found over an eight-season span.

Switzer had fatigue. “You haven’t lived my six months,” he said during the press conference.

Without him, OU football wouldn’t be the same for another decade. The school tapped defensve coordinator Gary Gibbs as Switzer’s successor. Gibbs, Howard Schellenberger and John Blake went a combined 61-50-1 over the next 10 seasons. (Gibbs’ 44-23 mark inflated that record.)

On his way out, Switzer mulled the idea of getting into broadcasting. He did that and more, winning two Super Bowls as the Dallas Cowboys head coach and succeeding in private business.

He kept his word.

In retirement he has retained icon status within the OU fanbase and made a home in Norman, where he’s a staple at delis and brunch houses.

Dorothy Jeanette Simpson (80) of Noble, passed away on June 3, 2020 at her home. Services are pending with McMahans Funeral Home of Noble.

Bluford Ivan "Pete" Kirby (90) of Noble, passed away on June 2, 2020 at the Norman Veterans Center. Graveside Services will be 10:00 am Friday June 5, at the Noble IOOF Cemetery. Directed by McMahans Funeral Home of Noble.