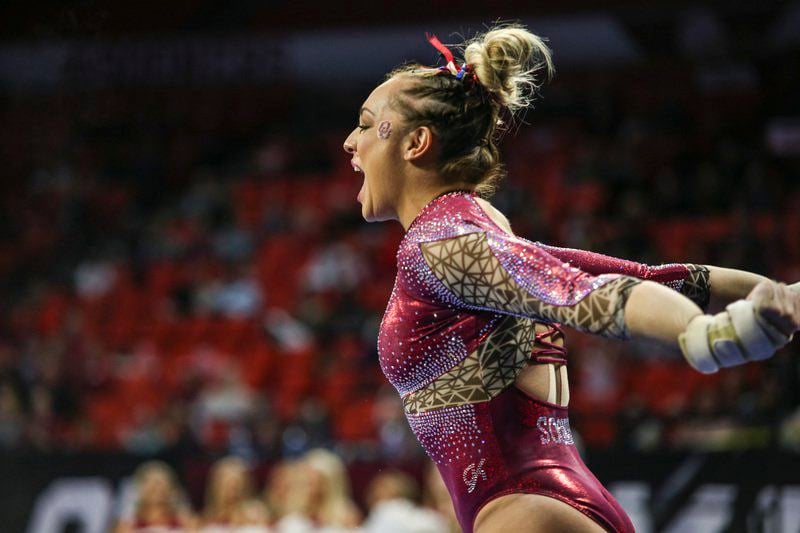 Oklahoma's Maggie Nichols celebrates her vault routine during the Sooners meet against West Virginia and Texas Woman’s University on Friday. Nichols scored a Perfect 10, the first of two on the night. 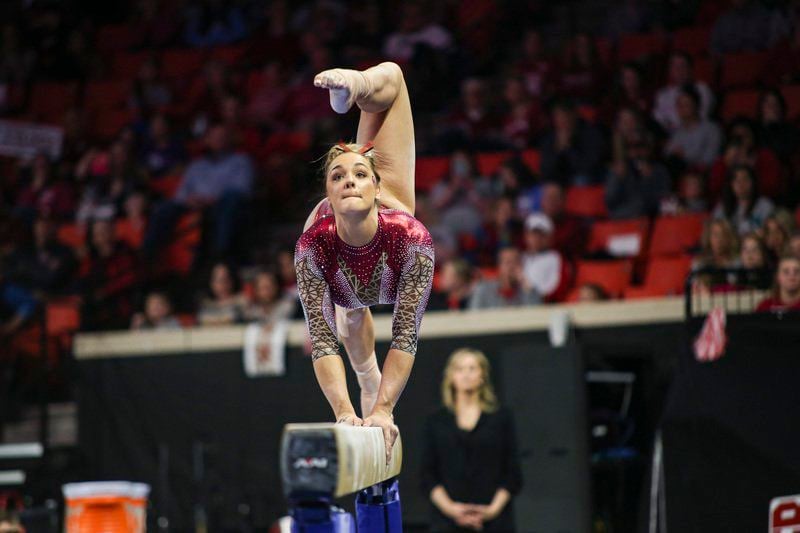 Oklahoma's Maggie Nichols works through her beam routine Friday in the Sooners' meet against West Virginia and Texas Woman’s University.

Oklahoma's Maggie Nichols celebrates her vault routine during the Sooners meet against West Virginia and Texas Woman’s University on Friday. Nichols scored a Perfect 10, the first of two on the night.

Oklahoma's Maggie Nichols works through her beam routine Friday in the Sooners' meet against West Virginia and Texas Woman’s University.

A little rest went a long way for Maggie Nichols.

Two weeks ago, she fell during a beam routine against Iowa State. The following week she competed in just one event for Oklahoma, as opposed to her usual four, to get some time off.

Then Friday arrived, when Nichols made her return to Lloyd Noble Center and put on a show.

She scored two Perfect 10s to tie UCLA’s Kyla Ross for fourth all-time in NCAA history, as the two chase the career perfect scores mark of 28.

Energized by her teammates' big start on vault, Nichols joined in and put up her 20th career 10. Moments later she added her 21st, that one on the uneven bars.

The early momentum put the No. 1 Sooners on track for a dominant victory across the board over West Virginia and Texas Woman’s University.

Nichols added a 9.925 on balance beam. A slight hiccup on her landing prevented her from three Perfect 10s in a collegiate meet, something she’s never done.

“To see back-to-back 10s is like, ‘What?’” OU coach K.J. Kindler said. “I was ready for Maggie to ask me to do floor after she hit those three events in the manner that she did but luckily she didn’t, because I would've said no. But I think she thought about it.”

“I did,” Nichols interjected.

It was the Sooners’ third-best score in program history, behind the record 198.500 against Florida in the 2015 regular season and a 198.457 in the Athens Regional last year.

It all started with OU’s program record 49.775 score on vault.

Olivia Trautman — competing in three events for just the second time this year — scored a 10 from one judge and finished with a 9.975. She followed with 9.875 on bars and 9.9 on beam.

“That vault was electric,” Kindler said, “and it just kind of lit up the whole team.”

Sophomore Allie Stern followed with another 9.975 on vault, and the Sooners were off.

“I didn’t see Olivia’s vault but I could hear the crowd erupt,” Stern said. “When I heard that — it definitely puts a lot of energy out in the arena. I just wanted to do a big vault and it worked.”

Down the line, OU went 9.9 or higher on all its qualifying vault scores. That excited Nichols as she waited her turn in the anchor spot.

“After ‘O’ stuck I was like, wow, we got this,” Nichols said. “I knew Allie was going to stick it, because I’ve been waiting for Allie to stick on vault because I watch her every day in the gym and she sticks almost more than anyone. I mean, she’s incredible.

“I always give her a little handshake before she goes, and I kind of felt it. When she stuck, I was like, OK I got this. They put so much energy within myself.”

She was motivated by her misstep on beam a few weeks ago too.

"Yeah, I was so ready to get back on [it]," Nichols said. "Last week I only did one event, so I had that fire burning inside of me."

Nichols now has four Perfect 10s this season, all coming in the last five meets. Ross and UCLA face Arizona State in a meet Saturday, where the race for the record continues.

“We talk often, like text and stuff. We don’t really talk about 10s and competing against each other on that,” Nichols said. “We both, I know me, we try to have fun and go out and do what we do in the gym. If I score that Perfect 10, amazing. But I’m just trying to it for my team and the university and doing the best routines I possibly can.”

Friday might have been business as usual for Nichols.

But for those watching it was a delight.

“To see her do that her senior year — 10 on vault, 10 on bars — it’s just incredible to watch,” Trautman said. “She trains like that in the gym, so it was definitely a cool experience tonight.”