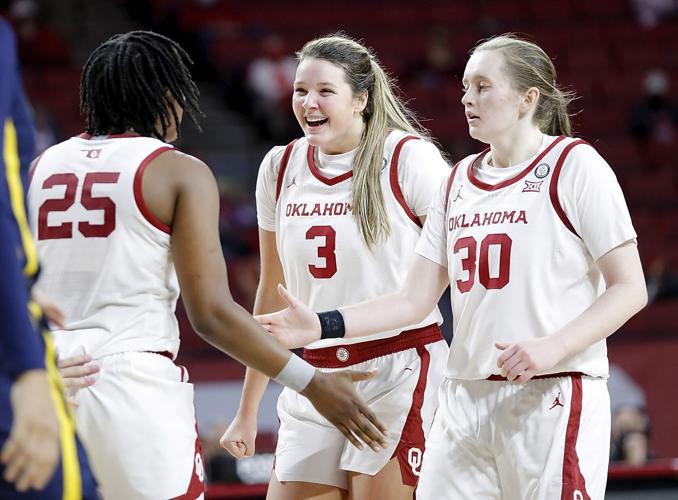 Oklahoma’s Madi Williams (25) is greeted by Mandy Simpson (3) and Taylor Robertson (30) during the Sooners’ game against West Virginia in January in Norman. 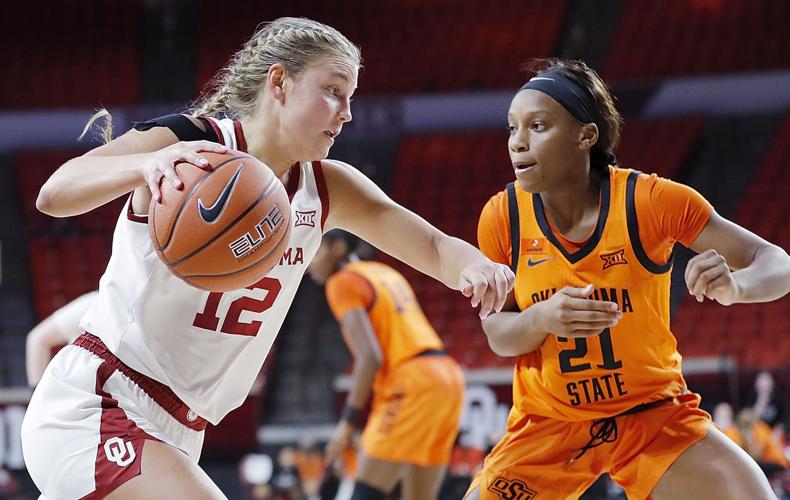 Oklahoma’s Gabby Gregory drives to the basket during a game against Oklahoma State on Dec. 15, 2021 in Norman.

Oklahoma’s Madi Williams (25) is greeted by Mandy Simpson (3) and Taylor Robertson (30) during the Sooners’ game against West Virginia in January in Norman.

Oklahoma’s Gabby Gregory drives to the basket during a game against Oklahoma State on Dec. 15, 2021 in Norman.

Sitting in her Norman office Friday morning, Sherri Coale took a moment to ponder all that her team has accomplished.

Oklahoma is 11-11 with a chance at its first winning record to close the regular season since the team’s 2017-18 campaign. The Sooners will need to knock off Kansas State at 3 p.m. today to get there but they’ve topped the Wildcats once already this season.

Despite losing nine of their first 15 games, the Sooners are a fringe NCAA tournament team, listed as one of the top-eight squads just outside of the field, according to ESPN’s Bracketology projection. They rank No. 68 in the NCAA’s NET rankings, as of Saturday, and are locked into the Big 12 tournament’s No. 6 seed, meaning they will avoid a play-in game where they were projected by the league’s coaches ahead of the season.

Getting to this position has required OU to play primarily with seven players, and at times with less, which has been a result of COVID-19 opt-outs, injury and academic issues.

As the regular season draws to a close, Coale wasn’t necessarily pondering OU’s record or its quest for its first NCAA Tournament bid in four seasons.

The longtime OU coach is more grateful for how her cast has handled the adversity they’ve faced.

“I could not be more proud of these seven kids out there,” Coale said. “Their fight, their perseverance, their ability to pivot and morph into whatever they need to be without complaining, without hesitating. They have just grown by leaps and bounds as a result of handling whatever is presented in front of them.”

OU’s primary group has helped it win five of its last seven outings. Perhaps it helps having a pair of 1,000-point career scorers in Madi Williams and Taylor Robertson — and they could have a third had an injury not ended All-Big 12 guard Ana Llanusa’s year before it started.

Senior Mandy Simpson and junior Tatum Veitenheimer have stepped up to provide experience and depth. Gabby Gregory has developed into one of the conference’s top scoring options, posting 16.4 points per game, while freshmen Nevaeh Tot and Skylar Vann have been thrown into the fire as Tot has emerged as a starter and Vann has played 20 minutes per game off the bench.

Williams, who’s scoring a league fifth-leading 19.9 points per game, has been the main catalyst, though, for the Sooners.

“She is sort of the one that runs the thermostat in the gym. How she is, is how we are,” Coale said. “Her focus and her commitment to consistency from a mental and emotional spot every single day, that’s been huge for our team.

“I think we’ve taken our cues from her, and when your most talented player is setting that tone, then you’ve got a chance to do some really cool stuff.”

Williams’ leadership has best materialized in February, which included a ranked win at West Virginia and road victory at Texas. The run was preceded, however, by a difficult first two months of the season. OU dealt with COVID-19 issues, playing at times with just six players, the league minimum for competition.

Following today’s game, OU will head to the Big 12 tournament in Kansas City. A win or two there might help solidify OU’s case for an NCAA bid.

The rest seems to be taking care of itself.