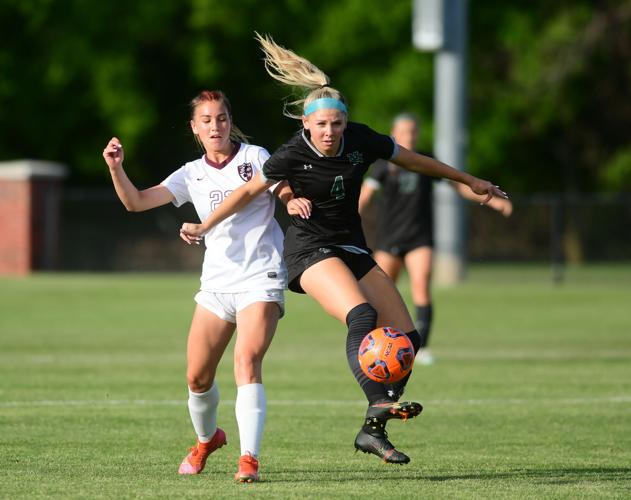 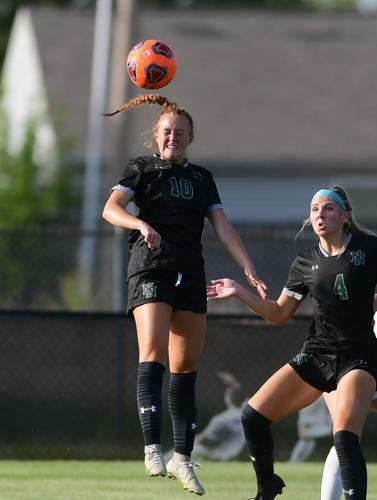 The first two semifinal trips — their freshman year in 2019 and junior year in 2021 — both resulted in wins, and both seasons ended with state championships.

With a win tonight, the Class of 2022 will compete for a third championship this weekend. It’d likely be their chance at a fourth championship had the 2020 season not been canceled due to COVID-19.

This senior group has played in plenty of big games. But they admit this latest semifinal game has a little bit more meaning.

“It’s nice because we’ve made state every year, but this year we’re doing it as seniors,” North senior Kendra Hudgins said. “It’s just nice and we’re so blessed to do it again. It means a lot more since we’re seniors.”

The group of six varsity seniors has been through a lot on the field together.

A lot of them arrived at North in 2019 with prior experience playing together. Their freshman year saw the T-Wolves win 15 games en route to a state championship win over Mustang.

Their sophomore year started strong with three straight wins before COVID-19 struck. The team came back their junior year to win all 16 games and another state title.

“I think it was different because we were always watching the leadership,” North senior Jada Ryan said. “When it was finally our turn to step in, we kind of didn’t understand what we were supposed to do. But I think [North coach Trevor Laffoon] helped us figure it out.”

It didn’t take long before their leadership was put to the test.

The T-Wolves had won 23 consecutive games prior to this season, and though this year’s team won three games to begin the year, that streak ended at 26 with a 1-0 loss to Edmond North back in March.

“We learned a lot about our team and what we needed to work on, and how we needed to come back from that,” North senior Becca Tweedy said.

They certainly bounced back. They’ve won 12 of 13 games since then, including their first two games of the playoffs, with the only loss coming to Westminster Schools during the Gulf Shores Tournament in Alabama.

“The older girls have really done a good job of leading the group,” Laffoon said.

They’ve been as dominant as ever since that loss. In their last eight games, the T-Wolves have outscored teams 60-3, with only one goal coming against the team’s starters on defense.

The seniors attribute that success to the team’s chemistry and experience playing together.

“It’s just unique because we are childhood best friends,” Tweedy said. “A lot of teams don’t have that uniqueness of being childhood buddies and growing up together playing soccer and playing on high school and club teams together.”

The seniors haven’t just been focused on themselves. Several underclassmen have made an impact on the team this season, and the senior group has emphasized helping them grow as the season continues.

“I feel like we’ve taken over and [tried to be] really positive,” North senior Hadley Horn said.

“We want them to have an input and know how to be leaders and be inclusive,” Ryan added.

Of course, the group knows it hasn’t won its third championship just yet.

While they beat Edmond Memorial 3-1 last Friday to advance to the semifinals, the team knows it wasn’t their best performance. The focus since that game has been coming out with better intensity against Union.

The seniors also want to play better considering Tuesday night will be the final home game of their careers. and because they know how it feels to win a state championship.

“Every struggle is worth it for that last minute of the game,” Kendra said. “And you’re just like, ‘Wow, I did it with my whole team. We are so close and we did it together.’ It’s great to share it with everyone.”

It’s not every year that a group of seniors wins two championships and has a chance at a third. and while there’s time to acknowledge how special this group is, Laffoon said it begins with a win Tuesday night.

“We will talk about it today,” Laffoon said. “But I think the biggest thing for these girls is to understand that this doesn’t happen. It’s not very common that teams are this successful continuously. I want the girls to understand that the final [game] is in our grasp and we can get there, but we’ve got to take it one game at a time.

“I’m just happy for our seniors that they can go out and play the last possible home game at Norman North.”

Game time is set for 6 p.m. at Norman North.

Jesse Crittenden is the sports editor of The Transcript and covers OU athletics. Reach him at jesse@normantranscript.com or at 405-366-3580.